The inner harbour of Corio Bay has had some fantastic land based fishing on offer as of late with some great reports of Rock Flathead being caught from many different parts of the bay, the Geelong waterfront has been one of the many hotspots. Rob Vecoli from Trellys Geelong has had a few ripper sessions casting soft plastics from the shore finding rock flathead to over 50cm and not many under 45cm, Rob has been slaying fish on small curl tail plastics. 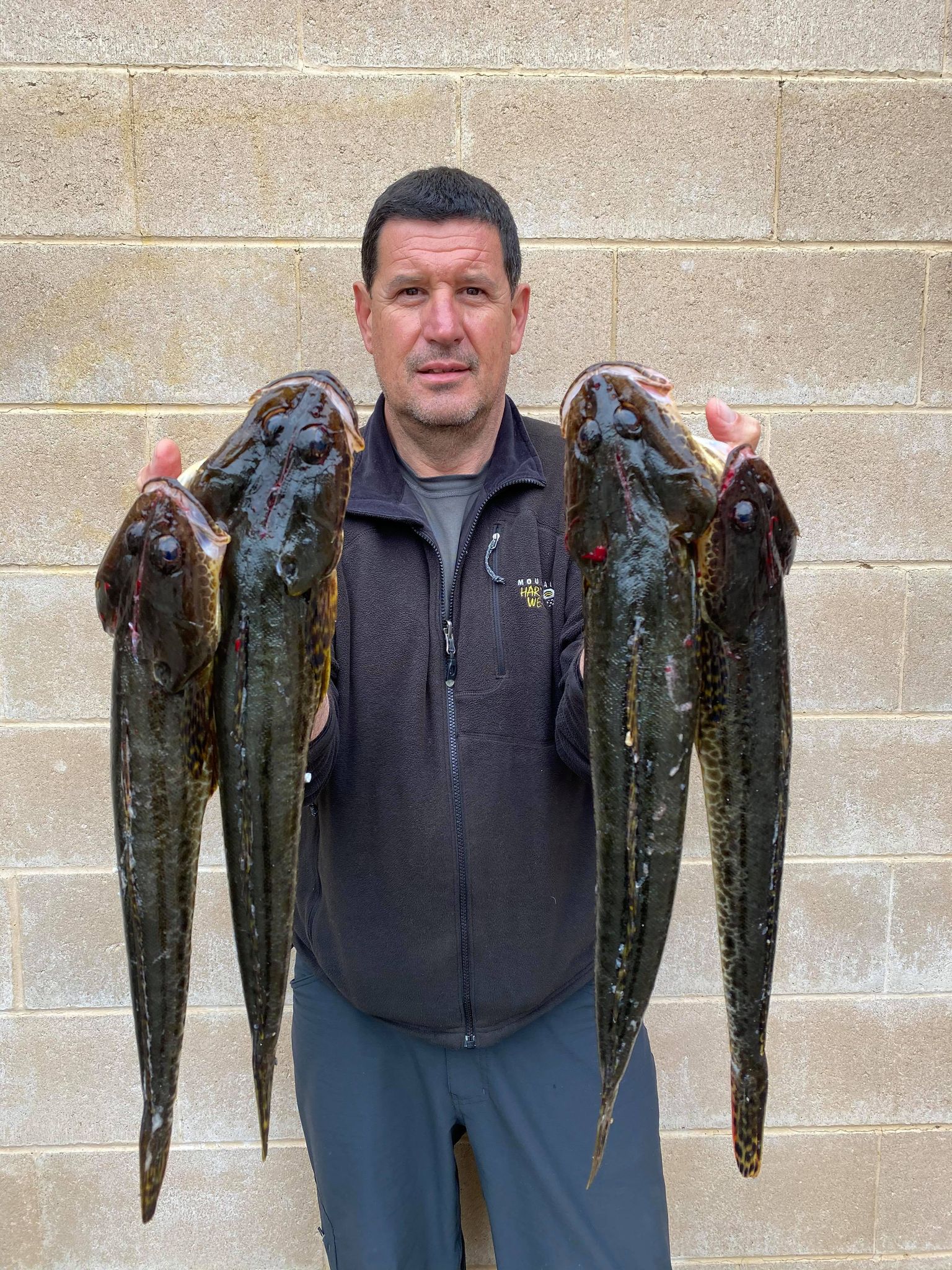 The Portarlington boat harbour has also been hosting some land based fishing over the past week with some very good snapper reports rolling through with some fish reaching up to 4kg in weight. The best time to fish is just after a strong blow especially if it’s in your face, it’s not the most pleasurable time to fish but the snapper love it. Pilchards and Squid have been the ideal baits but if the time is put in the results are well worth it.  Clifton Springs jetty has also been producing some solid land based captures with Calamari showing up in decent numbers. The snapper reports in the outer harbour are still coming through with fish being caught from all different parts of the bay with once again the channel being the most popular location and even up towards Portarlington has had a few fish being taken too with some fish reaching up to 6kg. 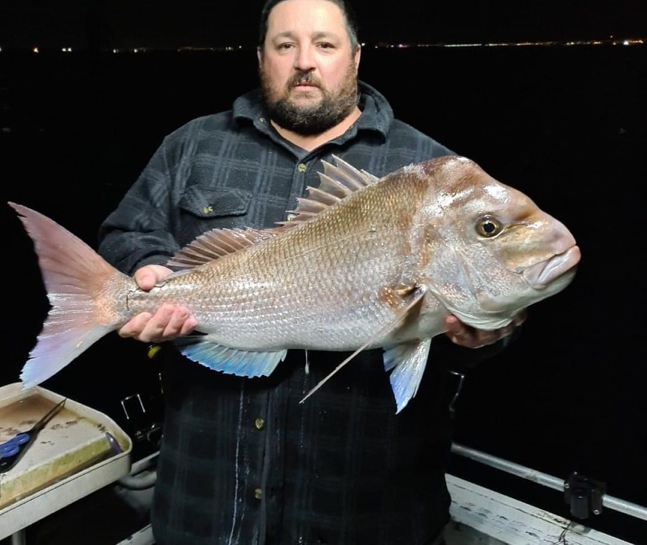 The Queenscliff cut has had its fair share of good fishing too this week, Salmon, trevally and pinkie snapper all keeping anglers well amused and is a great land based option or if the weather is too rough to get out in the bay. St Leonards is still fishing quite well for whiting with the area known as Bourke street through to the boat ramp is holding majority of the fish with even a fair share of fish being caught from the pier.

The Barwon River is still offering some great carp fishing at the moment with pretty much all parts of the river holding fish. Fishing with a very lightly weighted running sinker rig with corn kernels should get you into the action, throwing little hard body lures can also find you a few redfin too.

Rainbow Trout continue to bite well in Wurdi Buloc Reservoir with good numbers of fish showing up, casting small hard body lures has been lethal with other anglers having great success casting flies too.

The Goulburn River has been dropping over the past week and hopefully it will level out and clear up a little over the next week to allow for some good fishing options. Yellowbelly have been hit and miss with most getting caught on Baits such as Yabbies and worms.Around Nagambie there have been a handful of Yellowbelly getting caught while casting spinnerbaits.

Lake Victoria in Shepparton has recently had the weed cleaned up a bit which will hopefully lead to some better fishing opportunities. We should start seeing some more Yellowbelly getting caught out of Lake victoria with soft plastics like the Bait Junkie 2.5” grub rigged with a beetle spin being a great choice in Lake Victoria. Kialla Lakes have seen some great fish getting caught but the action has slowed up over the last week. Casting Jackall TN60’s and Ecogear ZX40’s are still the best options around Kialla while bait fishing with scrubbies is also producing some alright numbers of Yellowbelly.

Waranga Basin has seen plenty of smaller Redfin getting caught around Harrimans point and the caravan park. Worms and small yabbies have been the best baits as well as bobbing small Redfin jigs while you’ve got baits in the water. Trolling divers like 55mm codgers and size 3 Stumpjumpers have also been successful.

The Main Eastern around Pine Lodge and Katandra has seen some good Yellowbelly getting caught as well as some small cod getting caught as by-catch while targeting Yellowbelly. Casting lures like Jackall TN60’s and RMG Poltergeists have seen plenty of Yellowbelly hitting the bank. Fishing around structures such as bridges as well as any flowing water around drop bars have been the best areas.
Shepparton Local Tim Holden caught these nice Yellowbelly while targeting areas with a bit of shadow over the water throughout the week. 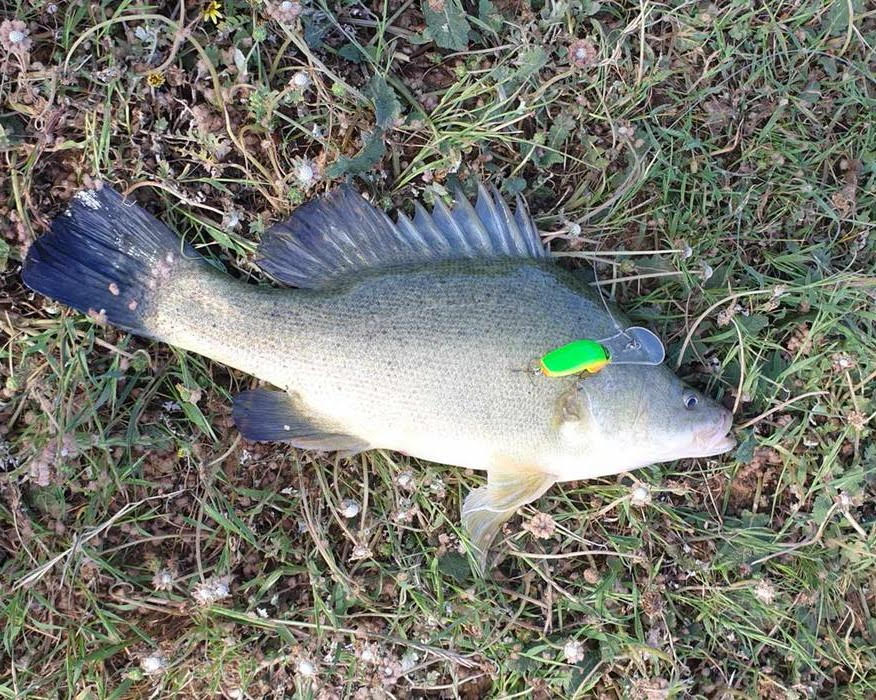 Benny Rendina has also been fishing the Main Eastern finding some nice Yellowbelly including this one that he caught earlier this week. 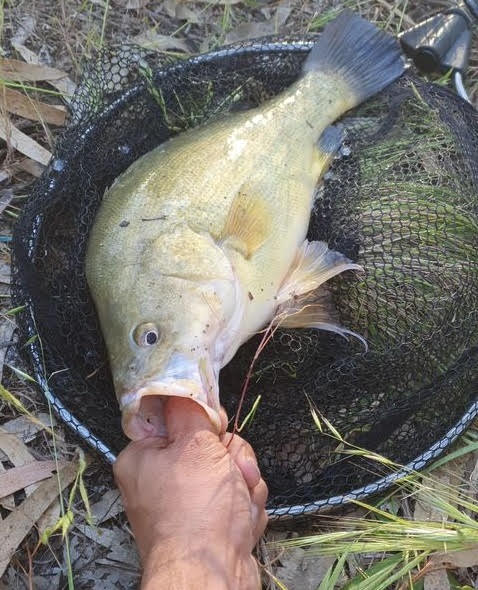 Last weekend at Lake Eildon saw some more great Murray Cod and Yellowbelly getting caught throughout many different sections of the lake. Murray Cod have been getting caught on Surface lures in the shallow bays and around the edges of rock banks throughout the Main arm, Big River arm and Jerusalem Creek arm. It’s a great idea to find the bait first and focus around schools of Redfin, Roach and other small fish that are holding mid water as there will usually be some bigger Murray Cod close by picking off any that stray from the school. Trolling shallow divers around the edges and timber to try and locate bait fish on the sounder, then casting lures around this bait once you have found it is a great method to get yourself on the board. If the bait is holding in shallower areas, swimbaits and surface lures like kingfishers are a great choice. When targeting bait around rocky banks, Spinnerbaits, chin-weighted swimbaits or plastics are your best bet.
Most Yellowbelly have been caught around the Delatite arm while casting lures like Jackall TN60’s, Zerek Fish Traps and black grub soft plastics like the Bait junkie 2.5” grub. Trolling smaller divers around the Delatite arm has also seen some nice Yellowbelly getting caught. Divers like RMG Poltergeists and Size 2 Stumpjumpers have been successful and are a great option for covering more water in search of some nice fish.
Mark fished Eildon over the weekend and found some nice Yellas and this surface eating Cod. 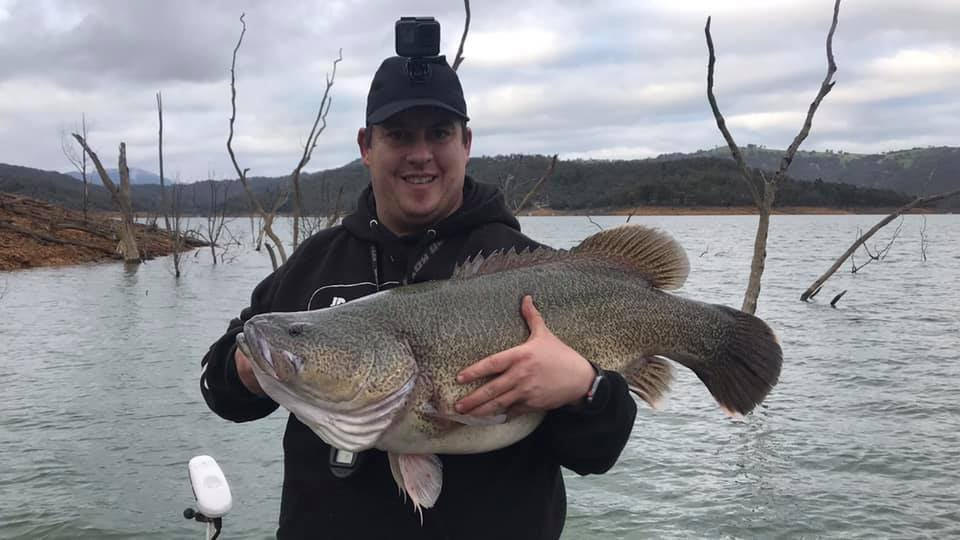 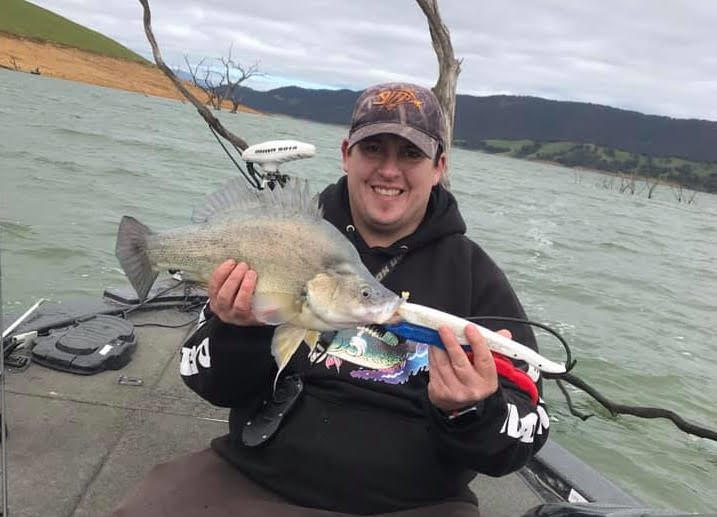 Water below Laanecoorie has started to dirty up, but there is still plenty of fish to be taken on bait. Numerous anglers who have hit the area from Laanecoorie through to Newbridge have generally had at least some success on scrub worms whether it is a carp or a Golden Perch, with some Golden Perch measuring 50cm+.

Around Bridgewater the water seems to be a bit clearer with anglers reporting some good numbers of Golden Perch whether that is on lures or bait. A standout lure for this water way seems to be the Gangster Mini Mother Frogger in 1/4oz, a personal favourite colour of mine is the charterous and black, or a good alternative is a small hard body such as an Old Mate Lure in Purple Raider in 15ft.
At Serpentine the clarity is good, with fish being caught on small hard bodies such as Profishent Chainsaw in firetiger colour. Fishing tight against structure bobbing worms or shrimp has accounted for some good numbers of Yellow Belly.

The temperature in the lake is starting to increase every day. Fishing from the bank with a running sinker rig with scrub worms as bait has been the most effective way to catch these fish however while quantity might be there the quality is lacking with a majority of these fish coming in undersized. Watch this space however the lake is well known to hold some stonker Yellas and over the next few weeks it would be worth trying to grub the trees with Berkley Gulp black grubs - around the Picnic Point area would be an area of interest. The reddies should also start to come out in numbers with reports currently slow.

Campaspe River - The river is starting to slowly but surely clear up, creating more success for the keen anglers prepared to walk the banks. Casting small hard bodied lures such as the ever faithful Stumpjumper in colour 44 has seen some good Yellow belly caught up to 55cm. If bait fishing around Elmore Weir use scrubbies and try a running sinker cast just outside the faster flowing water and you’ll be in with a good chance of catching a nice sized Golden Perch.

Lake Eppalock has gone great guns over the last week!!
With the water finally warming up the fishing has also heated up. Some local anglers have reported some great numbers of Yellow Belly from the bank so it is a great opportunity to take the family and kids out to try and get one of these healthy fish. The best times seem to be the last few hours of light, so stick it out. Whether you rather cast lures or to use bait both have been successful. Scrub worms seem to be the bait of choice with anglers managing to catch up to 9 fish in a session averaging around 45cm in size. If casting lures try the Jackall Mask Vibes in 12/19grams, the colours of choice for those lures would be Ghost Bluegill or Red Belly Black. These lures are best worked slow with a twitch and pause method.
If fishing from a boat try to grub the trees with black Berkley Gulp grubs, if no success move on and try to look for those shelfs or drop offs or alternately the rocky edges and points. The fish seem to be located around these areas in good numbers. If you manage to catch one there have usually been a couple lurking together so make sure you cast in the same spot. If trolling try lures such as a RMG in the crazy deep or the 70mm Australian Crafted these lures have accounted for a good number of Yellow belly caught in this particular lake.
Local keen anglers Jack, Ned and Gerard were able to get out and catch some absolute ripping fish. Well done! 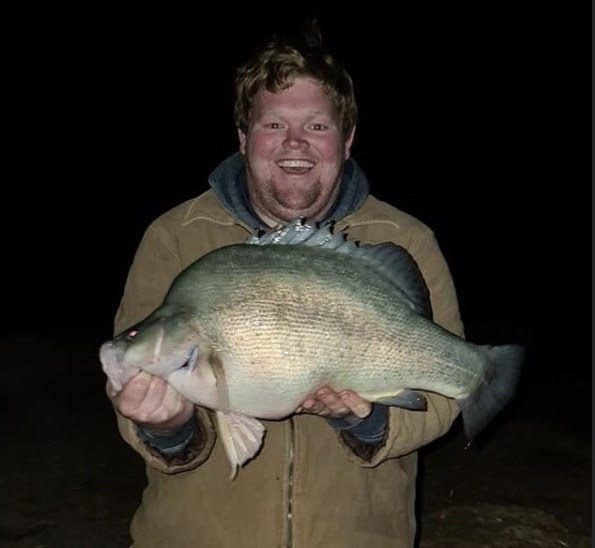 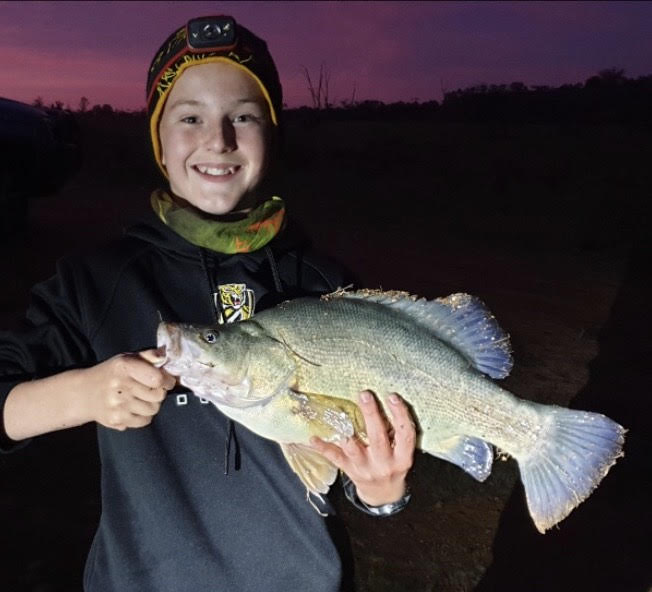 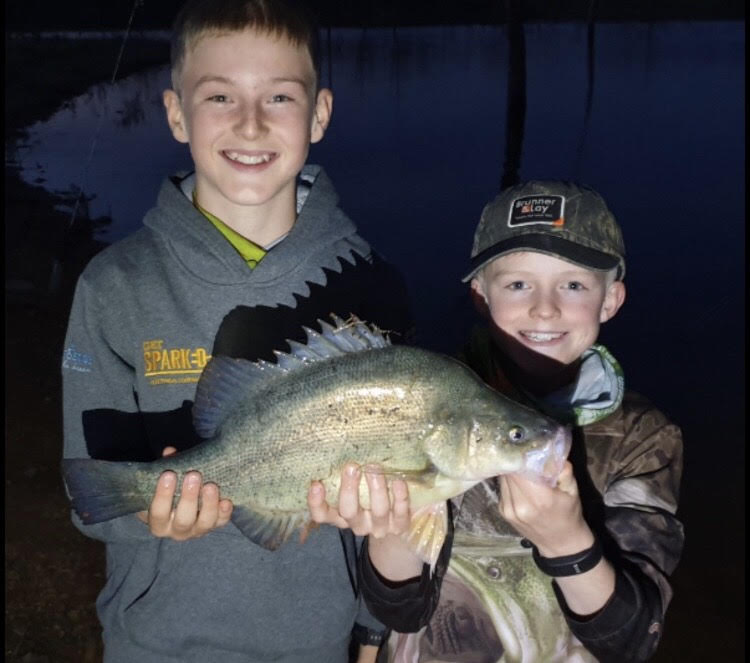 Redfin. Generally if you are finding where the Golden Perch are sitting the redfin aren’t too far away. With the lake filling up and the water temperature on the rise, stick to the sides and cast near the weed beds or look for some rocky drop offs. Casting plastics such as the Daiwa Bait Junkie, Curl tail grubs in the 2.5” have accounted for a number of these fish whilst a majority are smaller there are also some good sized ones around. If you locate a school try casting jigs or bobbins into them to increase your numbers.

Forrest Field lake has started to present itself as a good fishery for families looking to get out and catch a rainbow trout. However you are restricted to bait fishing only here due to the substantial amount of weed in the area. Powerbait in Sherbet seems to be the most popular bait used in this area.
Crusoe is seeing some good trout caught in kayaks trolling lures such as the Tassie Devil in 7g in the colour Pink. There are also some trout getting caught from the bank on powerbait. If using worms you have a chance at the odd Redfin, Yellow Belly or Tench that have been getting caught since the water has warmed up a bit.
Lake Tom Thumb and Kennington Reservoir has seen some reddies caught on small hard bodied lures such as the RMG in 3m in particular in the redfin colour (1313) has been a favorite. If bait fishing with worms there has also been some reddies or trout caught. Again being stocked trout you cannot go wrong with powerbait.
Share Share on Facebook Tweet Tweet on Twitter Pin it Pin on Pinterest
Trellys Victorian Fishing Report
Loading