Port Phillip Bay
The local fishing at the moment has been fantastic lately with most of your favourite saltwater species willing to bite. Starting from a bit further up the bay the area known as ‘P2’ has been fishing very well for Snapper. Most of these fish are averaging between 4-7kg and bag limit captures are very achievable. Altona is also holding plenty of Snapper to around the same size and they seem to be hanging in quite close to the shoreline.

Coming back into our more local waters Clifton Springs through Portarlington is still the current hot spot for them at the moment, although they have been very ‘on and off’ there is still some good fish to be had. Indented Heads has also been fishing very well for Snapper, Squid, Whiting and Gummy Sharks. Sam Riggio caught a Snapper this week weighing just over 5kg on a fresh strip of Squid on the start of the run out tide. 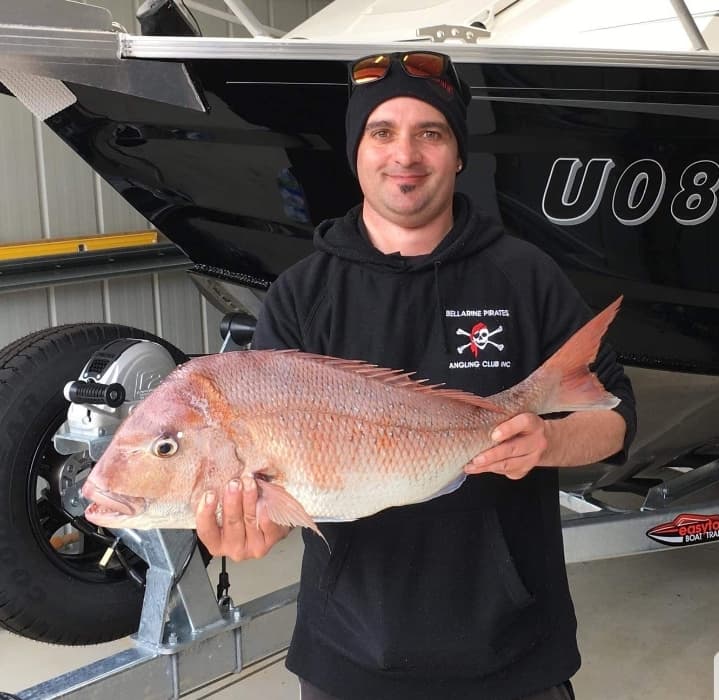 Damien Meddings went out from Indented Heads also and nailed a nice Gummy Shark on a fresh Squid Head in 9 metres of water, as well as that Damien also managed to catch his bag of King George Whiting out from St Leonards on Pipi and fresh Squid Candle. 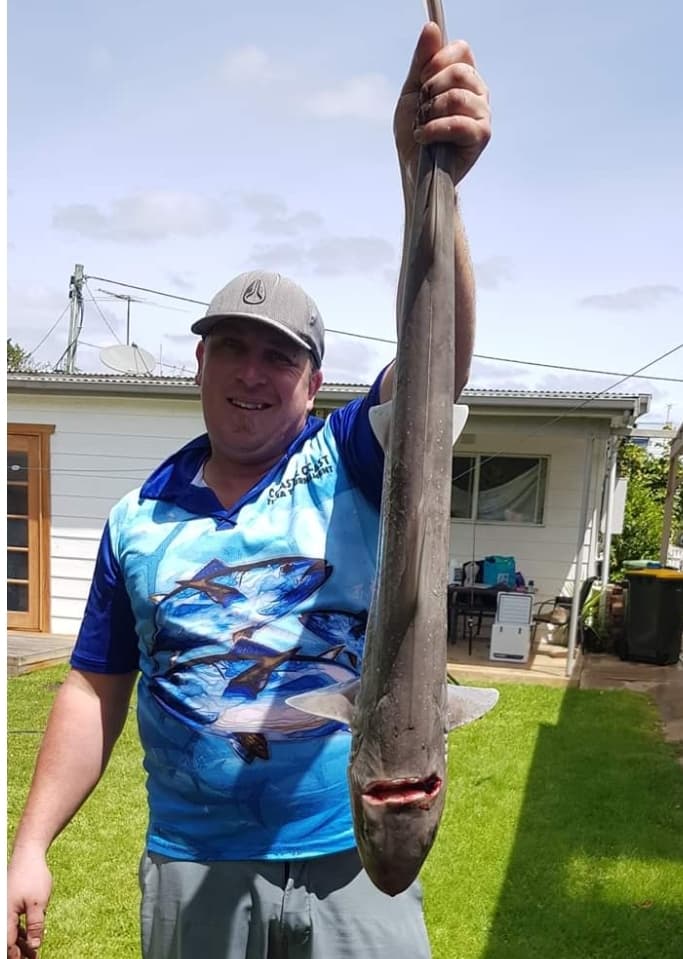 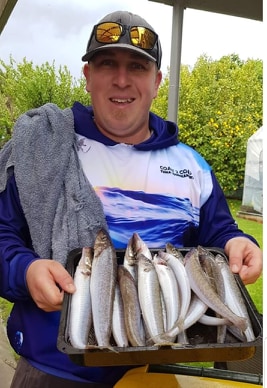 Moving along the Bellarine, Swan Bay has been fishing very well for Calamari for anglers in boats. Adam Taz and Michael Stavropoulos got out on the weekend and the pair managed a great haul of Squid. Down towards Queenscliff has seen a great variety of fish getting caught, casting soft plastics has been proven very affective for Pinkie Snapper and Australian Salmon. Jamie Marsh and Brad Apps got out during the week and had a crazy session on Salmon with a hook up nearly every cast. Out in the deeper and faster moving water has been fishing very well for Snapper to 6kg and Gummy Shark, Steve Davison made the most of the good weather this week and got himself a cracking Gummy Shark weighing around 15kg on a fresh chunk of Salmon. 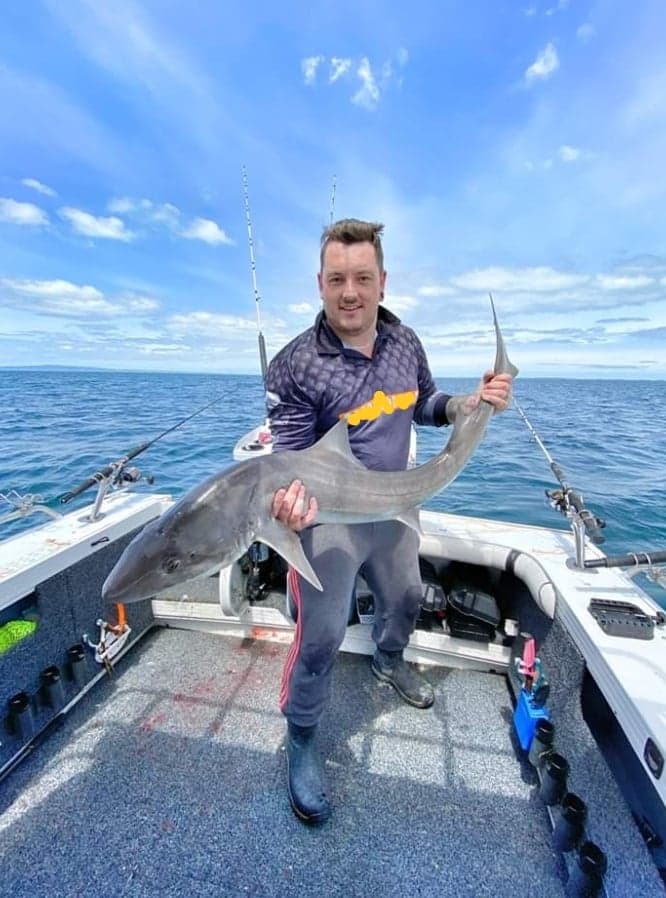 Offshore
Offshore from Barwon Heads is still fishing very well at the moment for again Snapper and Gummy sharks, boats positioning themselves just off the reefs in 35 metres of water are having no dramas in landing both species of fish. Gone Fishing Charters was offshore last week doing a bit of bottom basing for a few reef fish until the Crew and Customers were pleasantly surprised by the appearance of a Yellow Tail Kingfish. Hopefully it’s a good sign of what’s to come in Summer. 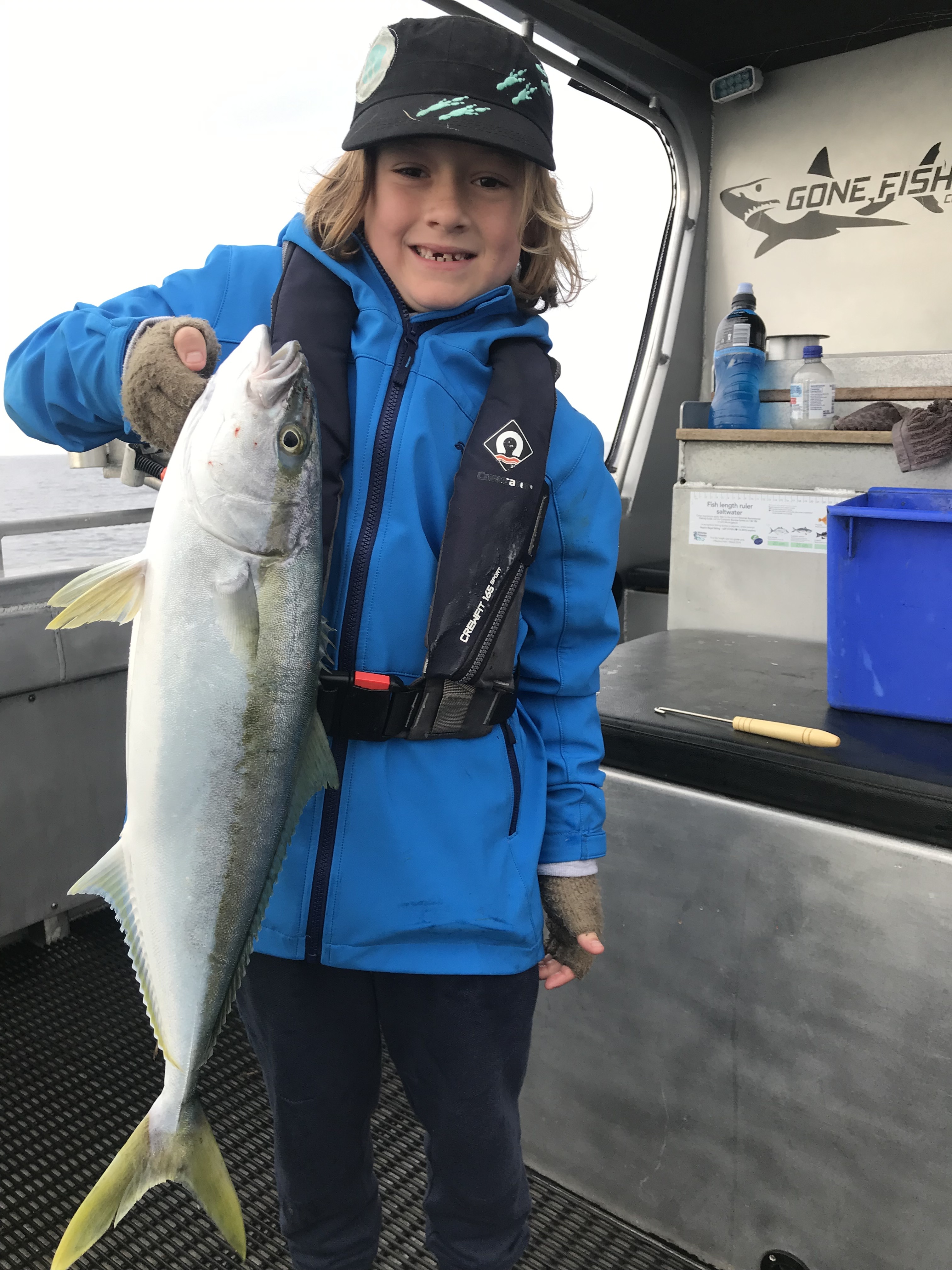 GOULBURN RIVER
Some nice Redfin, Yellowbelly, and plenty of Carp around the Wineries near Nagambie, Worms and Yabbies working the best, and Jackall T/N 60’s in darker colours and small Bassman and Pirate Spinnerbaits working well also.
When the wind drops, Nagambie Lake is producing some nice Yellowbelly, Troll small deep Hardbodies like the 55mm Codger along the edge of the old River behind the Pub and along the boardwalk.
Kirwans Bridge has been the standout in the area, Yellowbelly and Redfin on Soft Plastics and Worms and Yabbies anywhere around the Willow Trees.
Below the Weir from Murchison East, Toolamba, Arcadia through to Undera is fishing really well, the recent rain has freshened everything up a little, and the Yellowbelly have responded well, bait fishing with small Yabbies and Worms is still the best, but the fish are starting to respond well to small Spinnerbaits, Purples and natural Greens are the best, colour 19 or 7 Bassman.

RUSHWORTH/KYABRAM
Waranga Basin is fishing alright with some anglers getting onto some good numbers of Redfin while trolling small divers like 15ft Codgers rigged with a soft plastic paternoster being trolled above the lure. The major areas have been out the front of the boat club, Harrimans point and near the Caravan park. Yellowbelly have been getting caught more consistently at waranga while trolling for Redfin. The Yellowbelly out of the basin have been all around the 40cm mark.  Elaina and Adele fished out from the boat club Tuesday morning and caught this nice Yellowbelly and Redfin along with plenty of smaller Redfin. 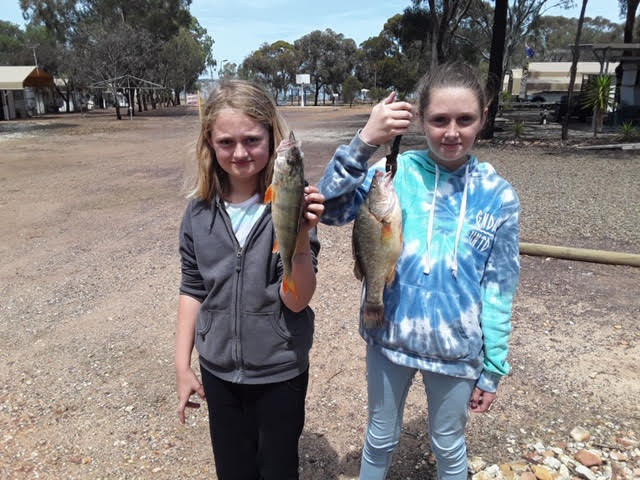 The number 6 channel near the Midland Highway and the Lancaster/Kyabram road is producing some nice Redfin, so is number 8 at McGrath road and along McEwen Road at Kyabram, Worms and Yabbies, or Hogback Spinners, red wool on the Trebles is a must. 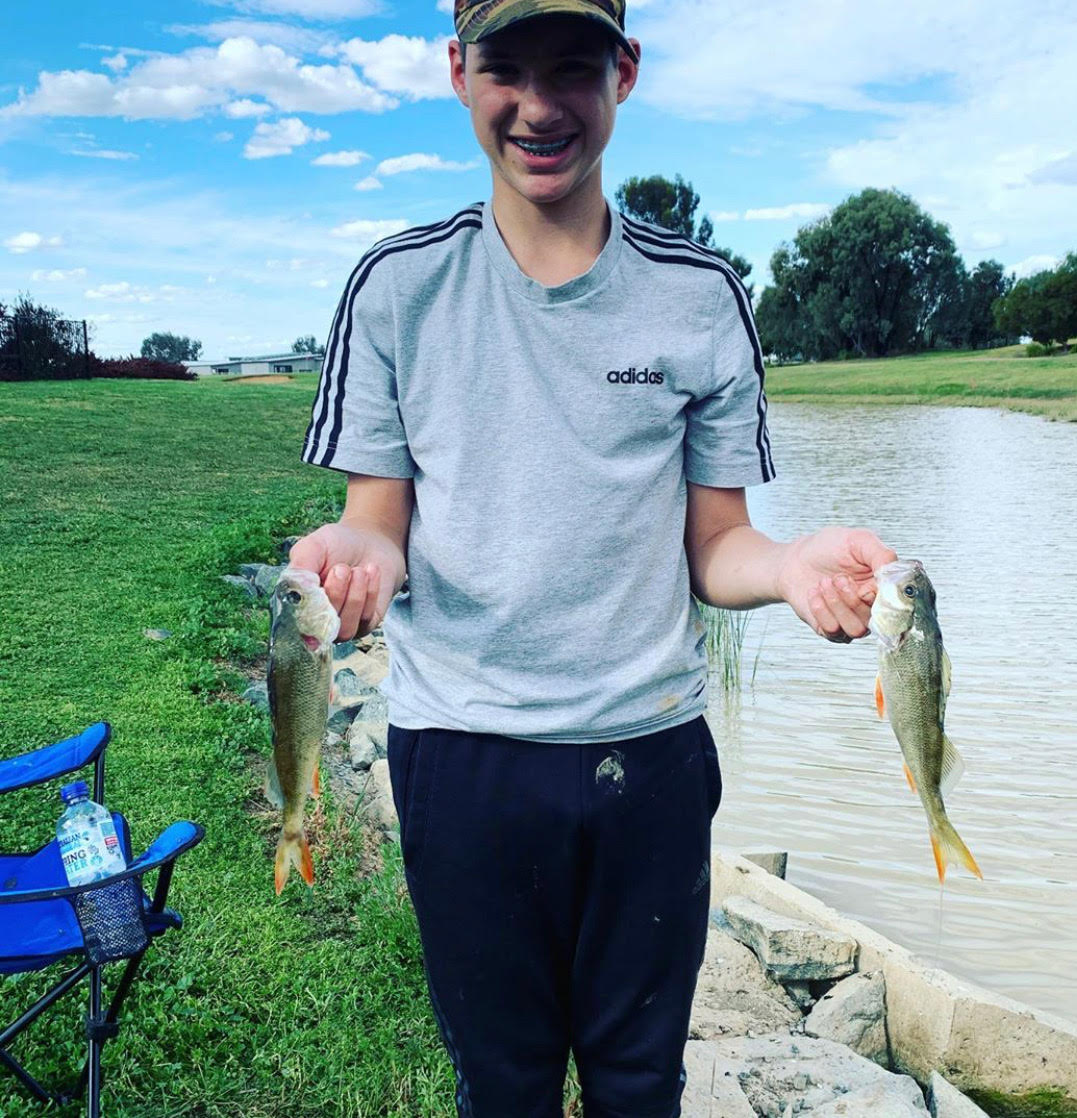 ROCHESTER
Austin Laurie sent us a report of some nice Yellowbelly starting to fire up near Rochester  “fishing’s now starting to heat up in the Campaspe at Rochy. There’s being some good yellas and even a few silver perch starting to get caught here. Got two last night on worms. Thanks, Austin Laurie.” 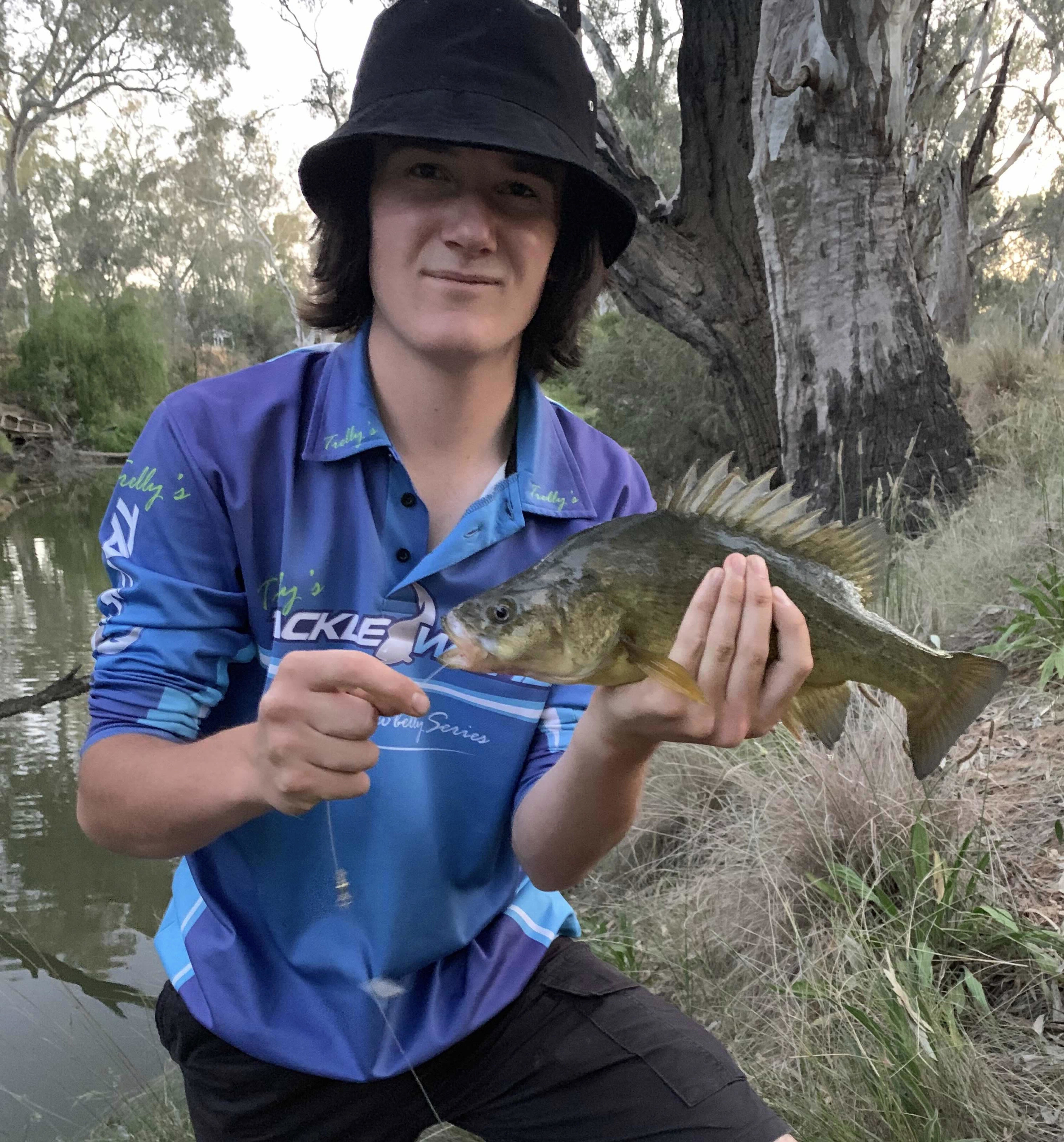 LAKE EILDON
We saw some nice Cod caught at  Eildon with anglers making the most of the long weekend, even with the average weather. Most Cod were caught around Jerusalem Creek and in the Delatite arm while trolling large hardbodies like size 1 Stumpjumpers. Bait has also been working well with some great Cod being caught on Bardi Grubs and big Yabbies. Yellowbelly are still going well in the same areas as the Cod and have been taking trolled lures like 3mt Poltergeists and even some getting caught on cod lures. Bobbing yabbies and worms into a school has also worked great. Being able to locate the schools of Yellowbelly on your sounder has been the key.
Share Share on Facebook Tweet Tweet on Twitter Pin it Pin on Pinterest
Trellys Victorian Fishing Report
Loading