The Barwon River has been fishing quite well this past week as the rain has certainly stirred a few things up and have caused bit of a carp frenzy. Anglers fishing the banks with corn kernels and bread have been having great success in landing carp to about 3kg proving some fantastic fun close to home.

Indented Heads has proved to be the number 1 whiting location this week with some great reports rolling in. Fishing the outgoing tide with fresh squid and mussels has been doing the damage with fish to 37cm and seeming to be holding in good numbers. Some whispers of snapper have begun to circulate with some fish starting to be caught in the outer harbour channel, as the water temperature increases we should only see it get better and better. Pilchards, silver whiting and squid are a fantastic bait to soak with plenty of burley to get those fish to your baits.

Out offshore towards Barwon Heads has had some ripping reports of bottom fish as of late, in particular snapper and nannygai. Drifting in depths between 30 and 50 metres is worth a crack as fish has proven to be holding there, fresh squid on a paternoster rig proving lethal. Daniel and Hudson Maddalena got out during the week landing numerous snapper and nannygai in 50 metres of water off the bluff. 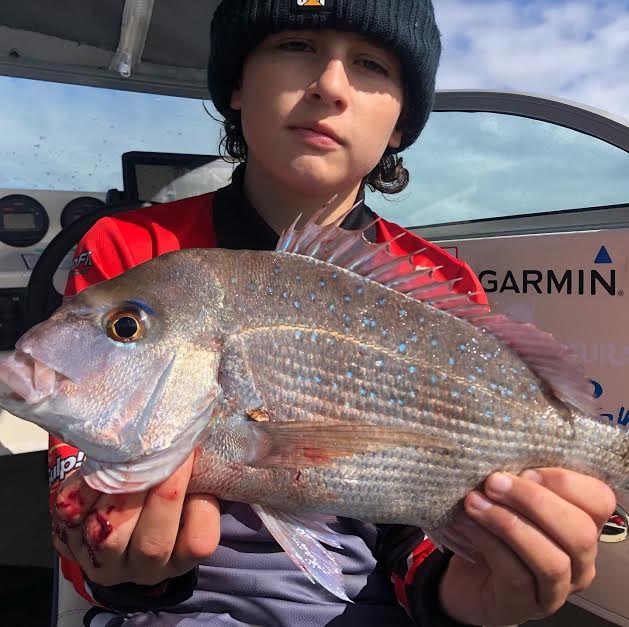 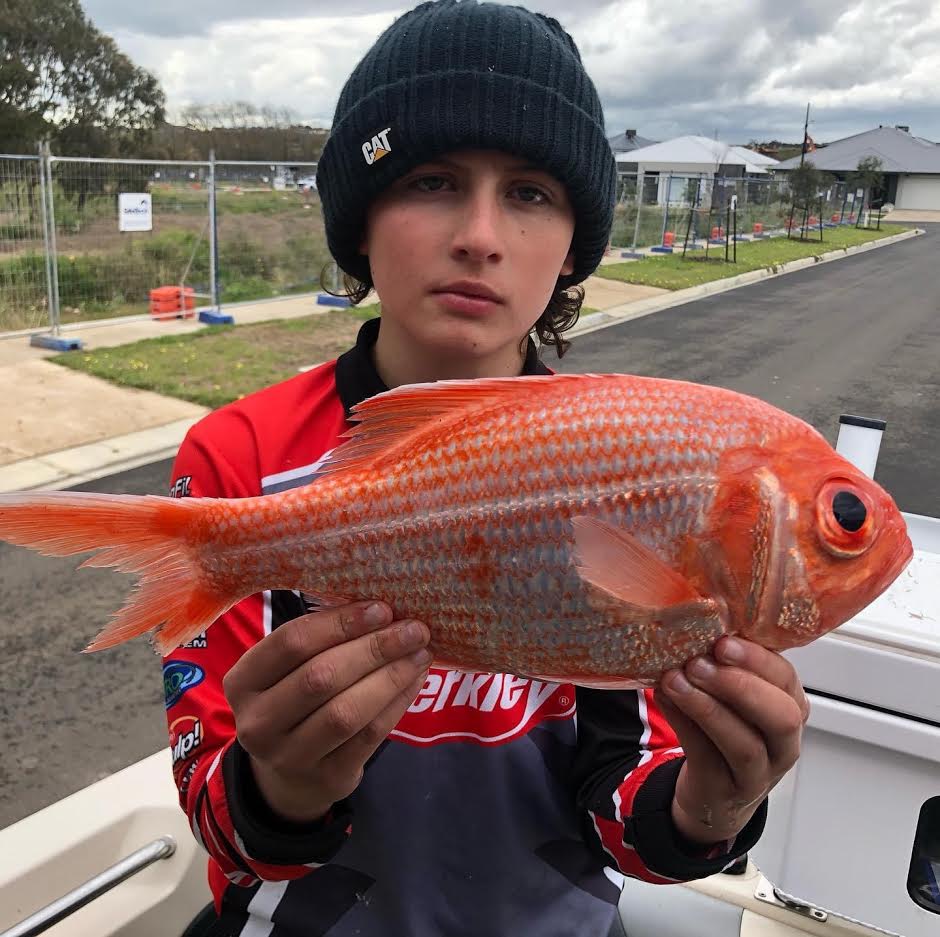 The surf coast beaches have still been producing some good Australian salmon fishing for the fishos casting metal lures from the surf, 25 gram lures have been very effective in landing fish to 1kg.

Lake Purrumbete has been on fire with some fantastic fish being caught from most parts of the lake. Casting shallow diving minnows over and along the weed beds on first light has been producing some quality fish to around 8lb along with plenty of smaller ones thrown into the mix. Redfin are still in great numbers out in a bit deeper, sounding up the schools and bouncing soft plastics on their heads is sure to get slammed by the large number of fish that are there.

The Goulburn River and Eildon pondage is still providing some great fishing for both brown and rainbow trout with fish to over 10lb still being caught! Local young gun Dasch and his father made the drive up over the weekend in hope to get stuck into the action and having great success in landing plenty of trout to 2lb along with a monster brown estimated around the 10lb mark. 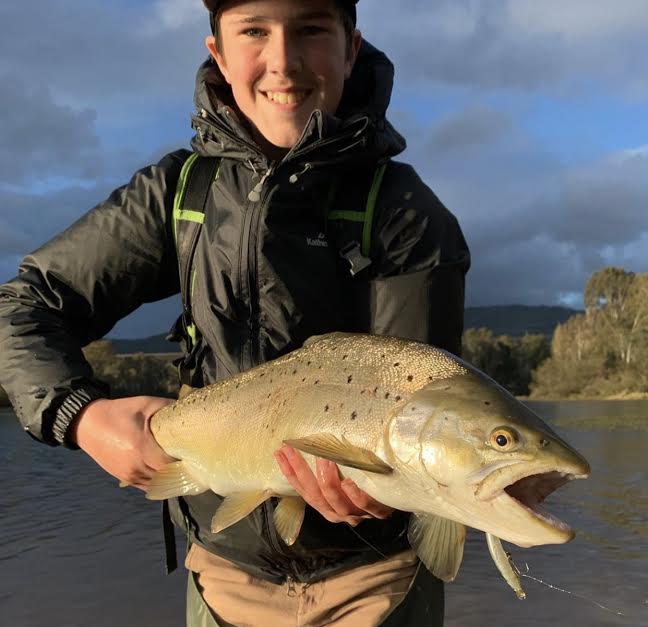 The Redfin at Waranga Basin are still a bit hit and miss but when found in schools there are always a few willing to take a well placed bait, soft plastic or Redfin Jig. Trelly, Charlie, Jaclyn and Ross Fished at Waranga Basin on Monday and found a few Redfin while trolling and fishing with Soft Plastics and Ecogear ZX40’s. While trolling they had the surprise catch of a 54cm Brown Trout that was caught on a size 3 Stumpjumper. 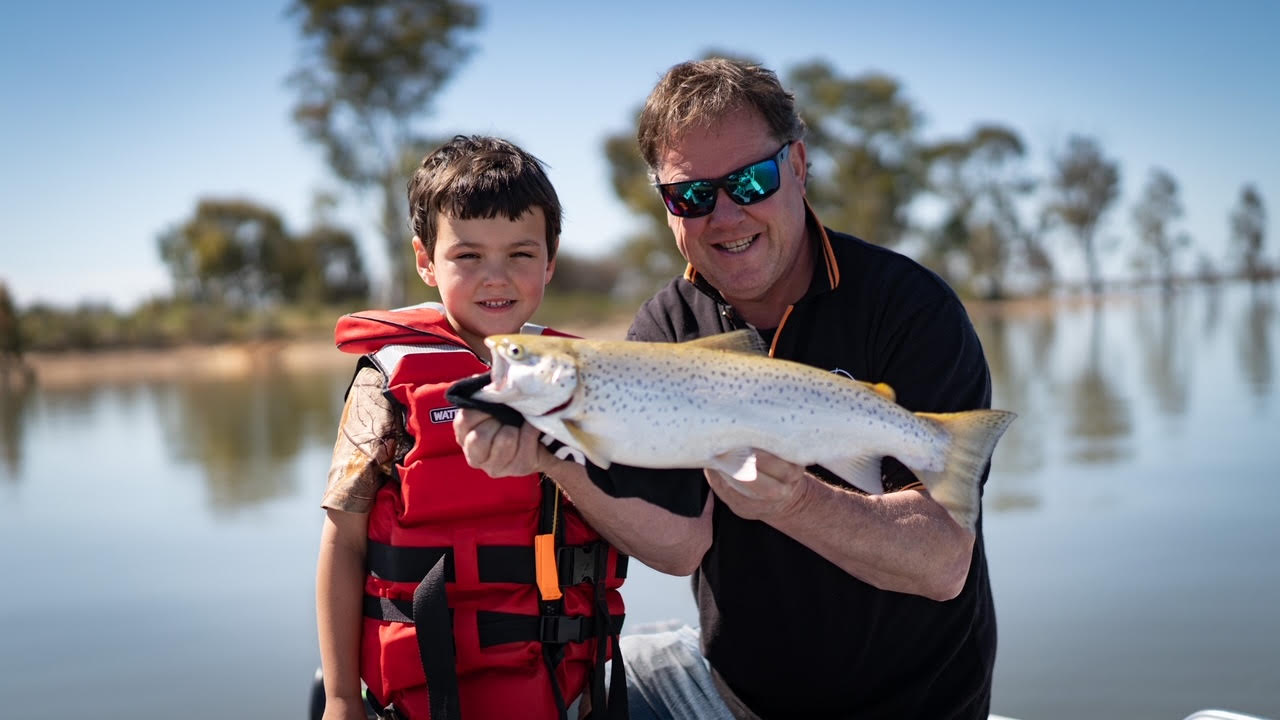 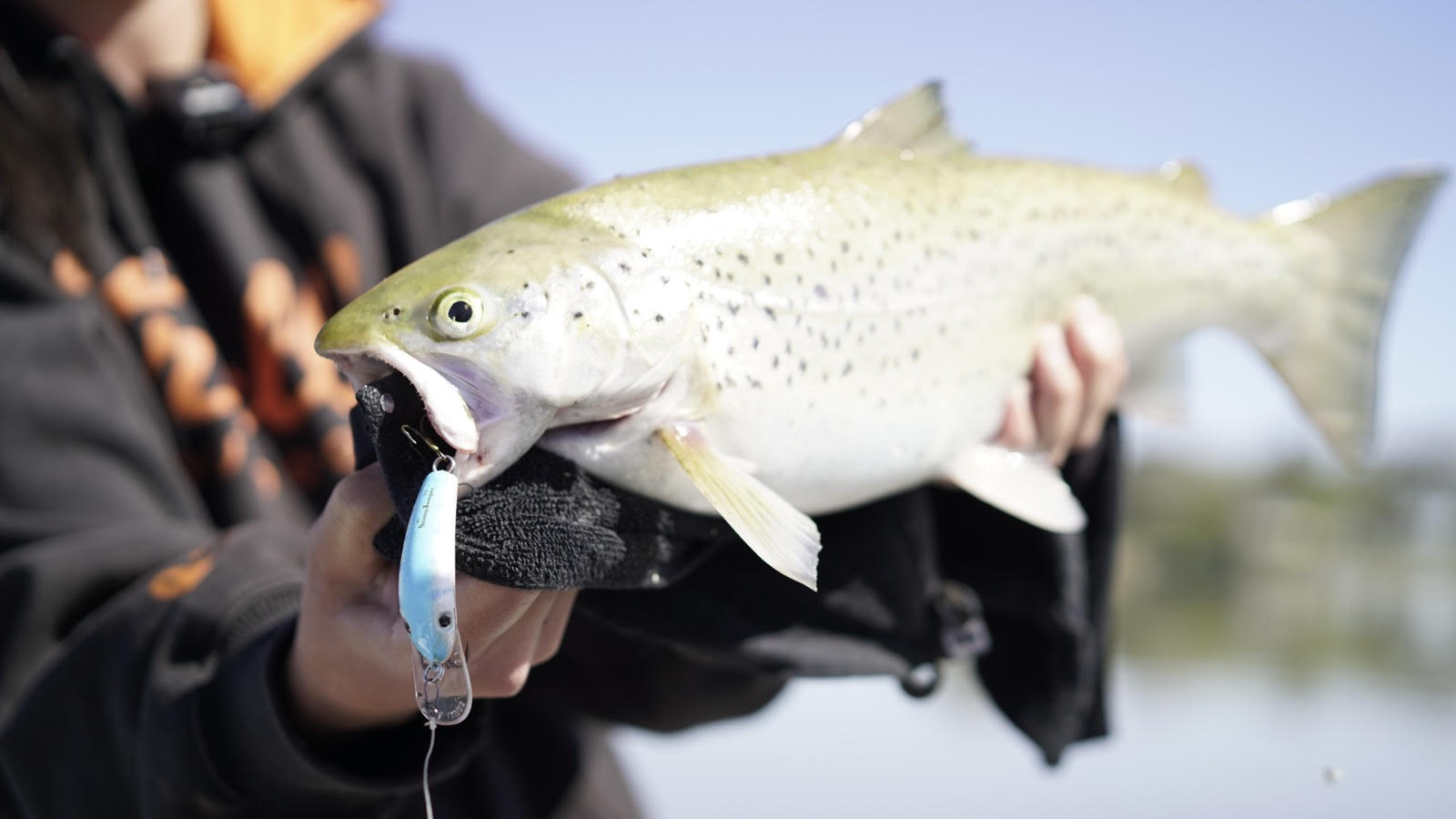 We’re seeing some better reports of Redfin and Yellowbelly getting caught in the Main Eastern Channel on Worms, Small Yabbies and Small Hardbodies. Around Murchison has seen some nice fish getting caught when focussing around drop bars and bridges. The best lures have been 55mm Codgers, Rmg Poltergeists in the shallow diver and size 2 or 3 Stumpjumpers. Red or Pink have been the colours working well lately.
The Channels around Waranga Basin and Rushworth have been fishing well with some great Yellowbelly getting caught on Small hardbodies as well as Jackall TN50’s and TN60’s.
Brandon Leitch was fishing the Waranga Basin outlet Channel on Sunday and caught this Brown Trout. 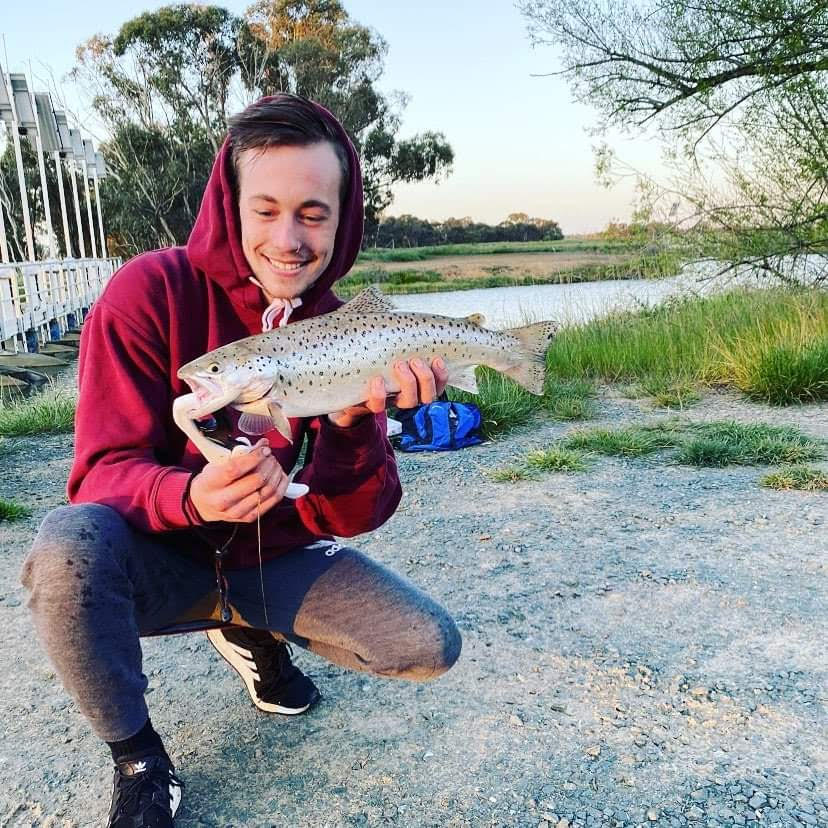 Brown Trout are an unusual catch around Waranga basin however most fish caught are usually a great size and put up an awesome fight, often throwing in some acrobatics moves before being landed.

The Murray River has been fishing alright with some Yellowbelly Starting to move well with the weather warming up. Over the past week we’ve seen a few more getting caught while casting lures like the Bassman Yellaman and Shortys. Size 2 Stumpjumpers have also been working well along with Arashi Deep 18’s. Bait Has still been an excellent choice with some great fish Getting caught on Scrubbies and Yabbies. Trelly and Mary fished along the Murray near Barmah over the weekend where Mary Caught this great Yellowbelly on a Live Scrubworm.

Dartmouth has been fishing extremely well lately with most anglers getting onto some good numbers of fish each day. Overcast conditions have been the best with the sun sending them down fairly deep. During the morning, flatlining Tassie Devils in colours Y05 Anglers Arty, Canberra Killer and BullFrog are the best choices lately. As the sun comes up and the fish go deeper, trolling fenders with a weight at the front to get them deeper works extremely well with a Scrubworm, Tassie Devil or Small hardbody trailing behind the Fender. If the fish are hanging really low the use of a downrigger has been very successful especially around lunch time and later in the day. Shepparton Regulars Fons, Rosslyn, Elaina and Adele have been fishing Dartmouth this week and finding great numbers of fish on small hardbodies behind a fender with a little bit of weight or on the downrigger. 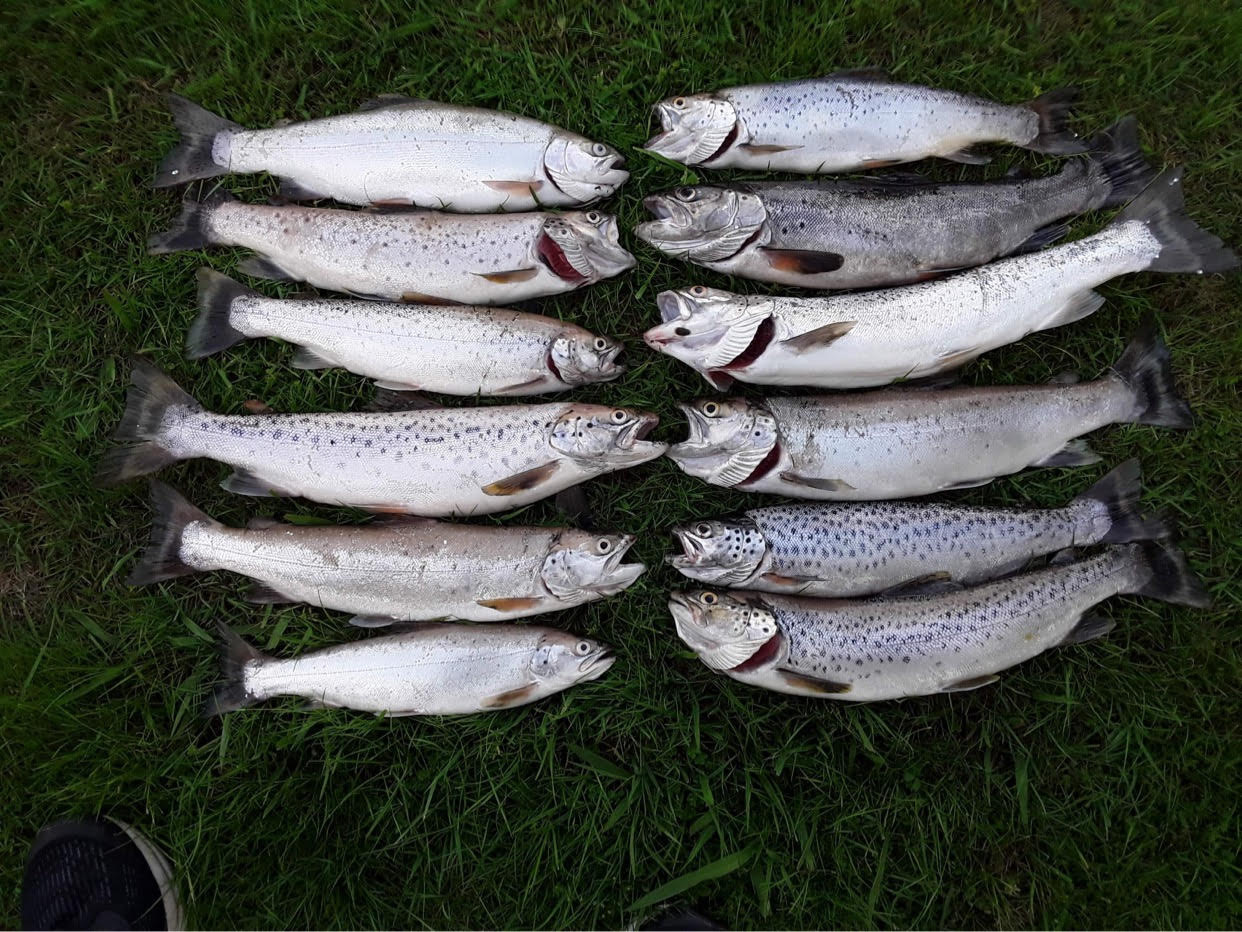