Bellarine Peninsula
St Leonards is still fishing reasonably well for king George whiting with the rougher weather stirring up all water sending them into a feeding frenzy, fishing any tide change has been very productive with fish reaching 40cm in length and holding in great numbers. The Calamari fishing has unfortunately slowed a bit this week with the weather playing a massive part in that too but if we can get some calmer days to allow that water to clear up they should go bonkers!

St Leonard’s pier has had a few good reports of early season snapper being caught of an evening with fish reaching up to 4kg in weight and showing up in reasonable numbers. This structure is a well-known location this time of year for snapper so if you’re aiming to get one early and land based, then this is your best location.


Queenscliff
The Queenscliff cut has been producing some good land based action for anglers this week with Australian Salmon and Silver Trevally chewing well, the new Daiwa Bait Junkies are getting fantastic results, in particular the 2.5” Grub. Fishing the high tide slack is by far the best time to fish there.


The Surf Coast: Barwon Heads to Apollo Bay
The local surf beaches have fired back up this week with plenty of variety on the go at the moment with salmon, gummy sharks and snapper all biting quite well and is a great fishing option if the wind is blowing from the north. Owen Westwell made the most of the conditions during the week down at Jan Juc landing himself salmon to about 1.5kg on metal lures. Other anglers have been having good success fishing at night with bigger baits landing both snapper and mulloway.


Lake Eildon
The Goulburn River has been a fishing hotspot this week with both brown and mega rainbow trout in great numbers, casting small hardbody lures has proven deadly with fish reaching over 10lbs which is a trophy fish. Roly Skene made the drive up landing himself some cracking trout, casting hardbody lures proved lethal landing him plenty of fish between 3-6kg


Shepparton Lakes
Victoria Lake is still seeing a handful of Trout and small Redfin getting caught while casting small soft plastics and fishing with baits such as Powerbait and worms suspended underneath a float. The best time to get and target the Trout within the lake are around first and last light however on overcast days like we’ve had this week that bite time gets extended further throughout the day.
Kialla Lakes has been seeing more Yellowbelly getting caught this week as we get further into spring and the water warms up some more. Casting Jackall TN60’s and Zerek Fish Traps have worked well with Yellowbelly up to 40cm getting caught. Fishing out of a kayak is also a great way to access a bit more of the lake and trolling lures has worked well as it covers more distance to find actively feeding fish. Trolling Jackall TN60’s has worked well over the past week at Kialla Lakes.


Goulburn River
Yellowbelly are starting to move throughout the Goulburn but they haven't fired up just yet. We’ve had a handful of reports of good fish up to 50cm getting landed around Shepparton on bait, Yabbies have been the most productive bait but Scrubbies are also proven as well as fresh shrimp. Around Murchison there have been  some reports of Yellowbelly getting caught on Scrubbies with not too much happening while fishing with lures.


Shepparton Region Channels
The Channels around Rushworth have been fishing well For Yellowbelly on lures and Bait. The Waranga Western Channel has had some nice fish getting caught while casting 55mm Codgers and Ecogear ZX40’s. Jackall TN60’s and Mask vibe 60’s are also a great lure to use in these channels. The #9 Channel is also producing some nice fish while casting lures and working your way along the Channel. Focusing on structure like bridges and around flowing water at the drop bars has proven successful.
The Main Eastern Channel Is seeing some Good Yellowbelly as well as good Redfin numbers. Around Murchison has been the best section of the Main Eastern however we’ve also had some good reports of fish getting caught out of the Main Eastern around Pine Lodge.


Waranga Basin
Waranga Basin is still hit and miss with a handful of Redfin getting caught with trolling still being the best method. The Shallower sections around Harrimans point and the southern parts of the lake are good places to start with Size 2 and 3 Stumpjumpers working well along with 3mt RMG Poltergeists. Another good section to work around is the North West section of the wall; as this area is deeper, lures like the Crazy deep 8mt RMG Poltergeists and 15ft codgers are your best bet.


Loddon River/Cairn Curran
Water clarity in the Loddon is still wonderful with Golden Perch starting to be caught in good numbers with some anglers reporting up to 5 fish in a session. A lot of these fish are coming on bait, with the best bait being live or frozen shrimp or worms. If casting lures small hard bodies like the Australian Crafted or a size 3 Stumpjumper in Fire Tiger have been a great choice. These fish seem to be sitting in shallower areas where the water is a bit warmer. It is also worth casting in around the reedy banks with yellas hanging around this structure. Hopefully the water warms up over the next few weeks and we see a little more consistency.

Lake Cairn Curran is slowly starting to see the yellas come back on the bite. Use a running sinker with a scrub worm, just keep a close eye on the rod because the fish currently can be a little bit finicky. If fishing from a boat there has started to also be some good redfin getting caught. The new Daiwa Bait Junkie soft plastics are a great way to target these fish. I recommend the 2.5’’ minnows at present due to a lot of the redfin starting to spawn. If chasing the yellas stick to those rocky ledges or try dropping a grub next to a tree as they should start to stack up around these areas. 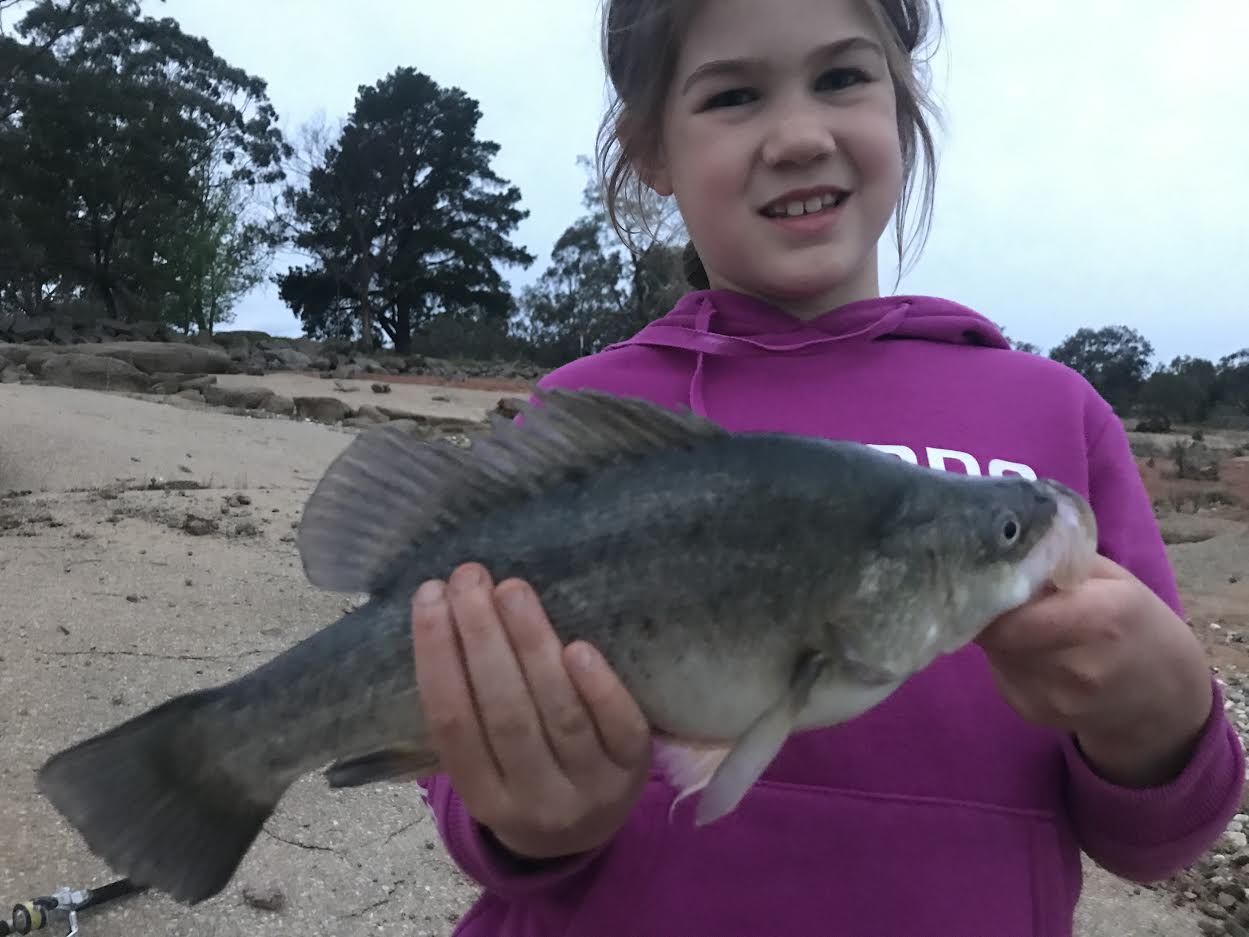 Campaspe River / Lake Eppalock
The reports coming out of the Campaspe River have really slowed down over the last week. Unfortunately fish are few and far inbetween currently, with the release of an environmental flow, the water levels are very high and dirty with some usual spots such as the Elmore Weir unfishable with lures. In saying that however there are still the odd fish getting caught here and there on bait. Scrub or Nathelia Euro worms seem to be the best option currently with the odd Golden Perch being caught up to 50cm.

Lake Eppalock has come alive over the last week, whether fishing from the bank or out of the luxury of your boat we have been getting good reports of some solid Golden Perch and some good Reddies being caught. Trolling around the rocky ledges in around 20ft of water has been a great way to pick up these yellow belly. The Australian Crafted 50mm has been an absolute must currently for the fisherman targeting this species, specifically in darker colours. With the current water temperature slowly rising it would also be worth trying to drop some lBack Burkley Grubs in around the trees, this is an exciting way to fish for yellow belly and can see a great number of fish caught.
If bait fishing is more your thing, yabby tails or whole small yabbies on a paternoster rig have seen some good redfin and yellow belly caught. Try bobbing worms in a school of reddies or around the stumps of trees if you’re struggling to get a bite. From the bank try casting your bait out along rocky ledges or a drop off to increase your chances of catching a Golden Perch.


Bendigo's Family Fishing Lakes
Crusoe, Kennington and Lake Tom Thumb have all been stocked with a good number of rainbow trout and I've heard some good reports over the last week on bait and lures. If you wish to use bait try Powerbait in particular Sherbet this scent has been the standout. If casting lures is more your thing try casting small soft plastics such as your Strike Tiger Nymphs or Celta Spinners. They have also been catching some reddies at these local lakes however they are a little on the smaller side but still great fun on light gear.
If you want to catch some carp in the middle of town Lake Weeroona is a great choice and I'm getting some good reports of really big sized carp being caught mainly on corn or a small hook with a worm.