The wild weather we have had this week has made it a bit harder to get out for a fish but it has definitely stirred things up and caused the fish to go crazy. After the strong blows it has really fired up the shoreline structures of Corio Bay, in particular the Geelong Water Front through to north shore. Adam Van Der Lugt from Trellys fished alongside Rob Thornton with the pair getting a mixed bag of Trevally, Salmon, Mullet and Pinkie Snapper to 58cm. The boys were both using Z Man Slim Swimz on a light jig head with motor oil and pearl being the 2 standout colours, casting hard up against the structure was the key to success. Other anglers have also been finding plenty of pinkie snapper too with even bait producing some nice pinkies, Tailor have also made their presence known holding in reasonable numbers and another species to the mixed bag that’s on offer. 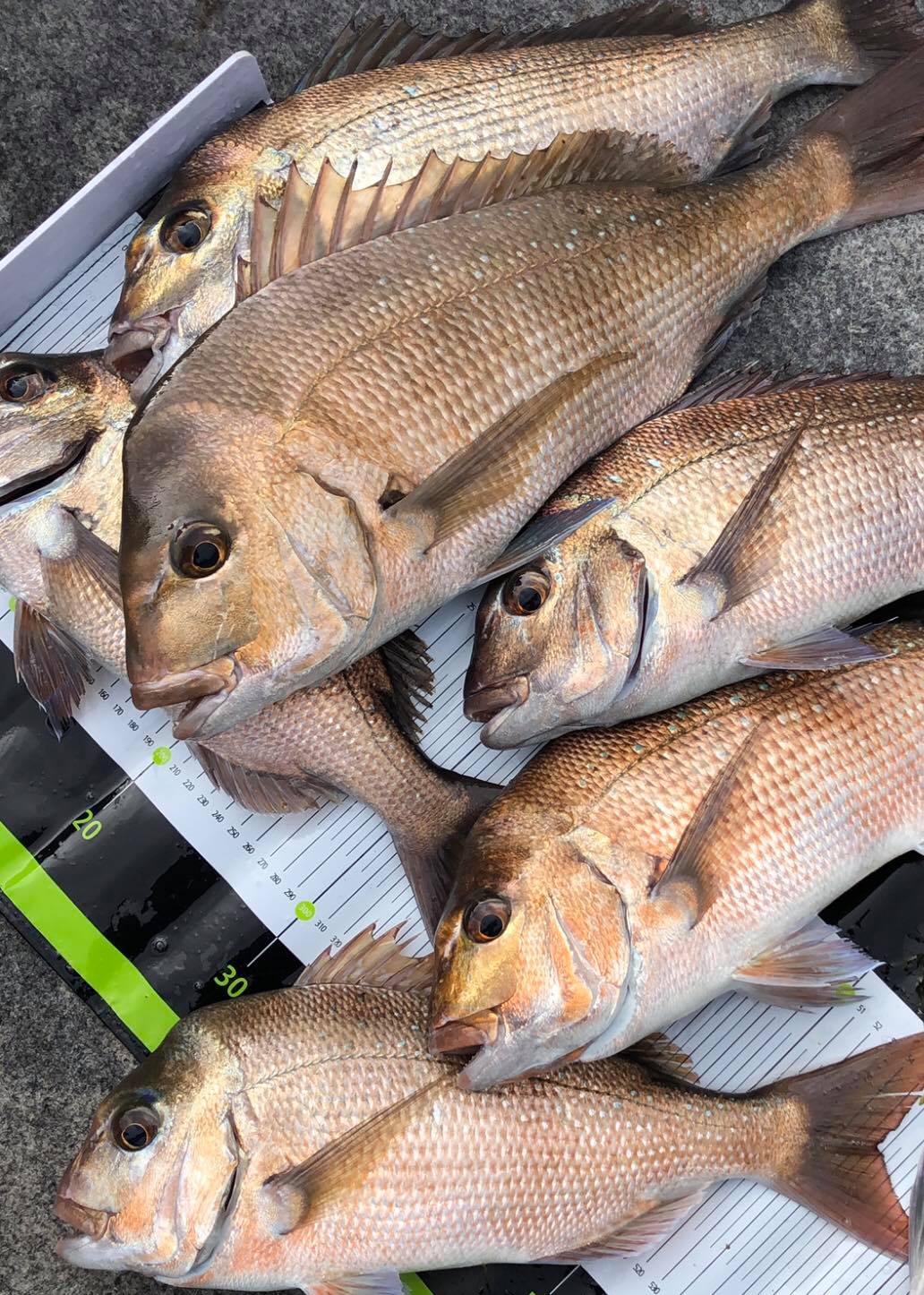 
Around the Bellarine Peninsula has been fishing very well this past week for King George whiting with most areas producing plenty of fish with St Leonards being the standout by a long shot. Owen Westwell and I found plenty of fish to 40cm holding in 5 metres of water just off St Leonards, the start of the run out tide was when the bite was at its best with pipis being the best bait. The Squid fishing has been pretty tough unfortunately due to the dirty water but once it clears up we can expect the bite to be a good one. 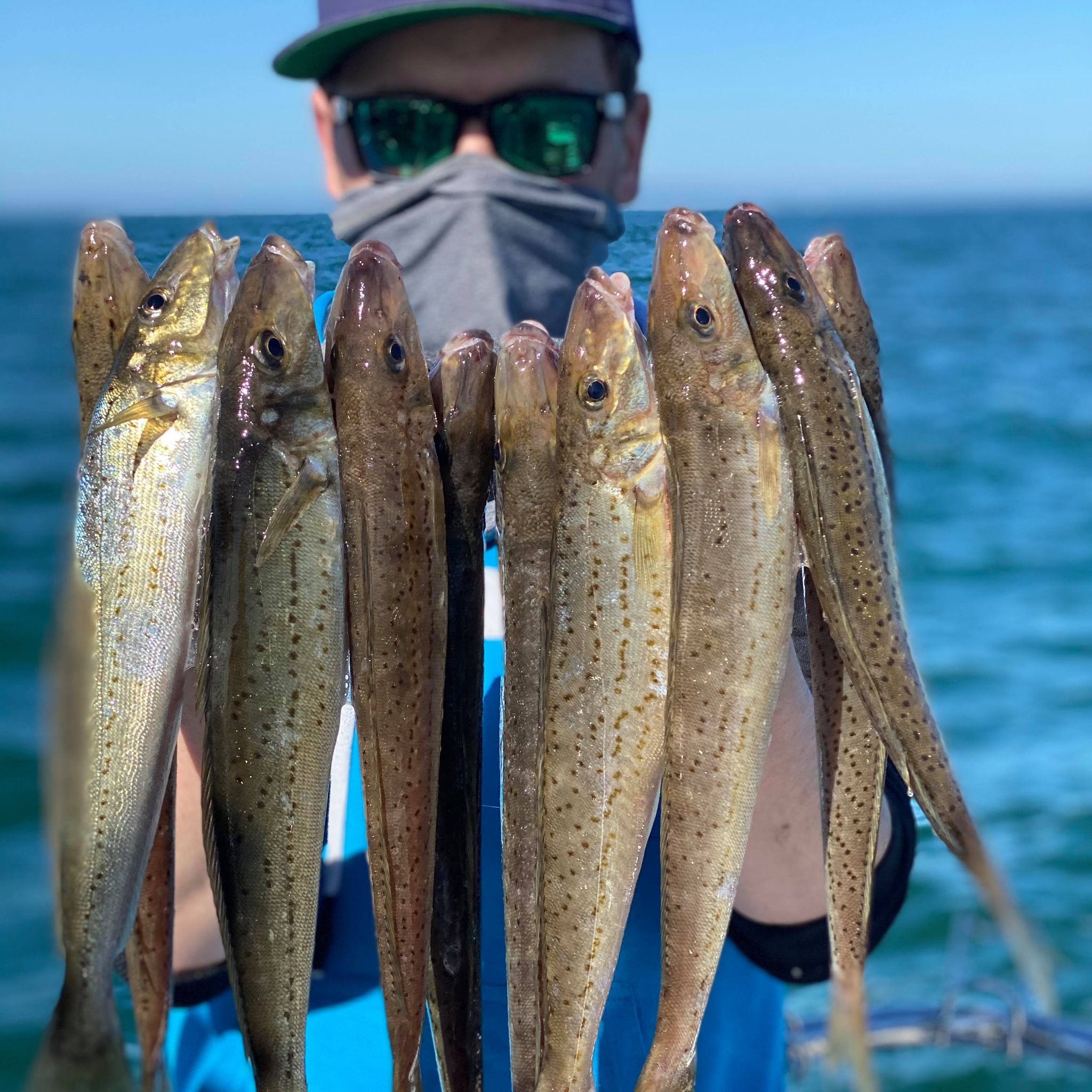 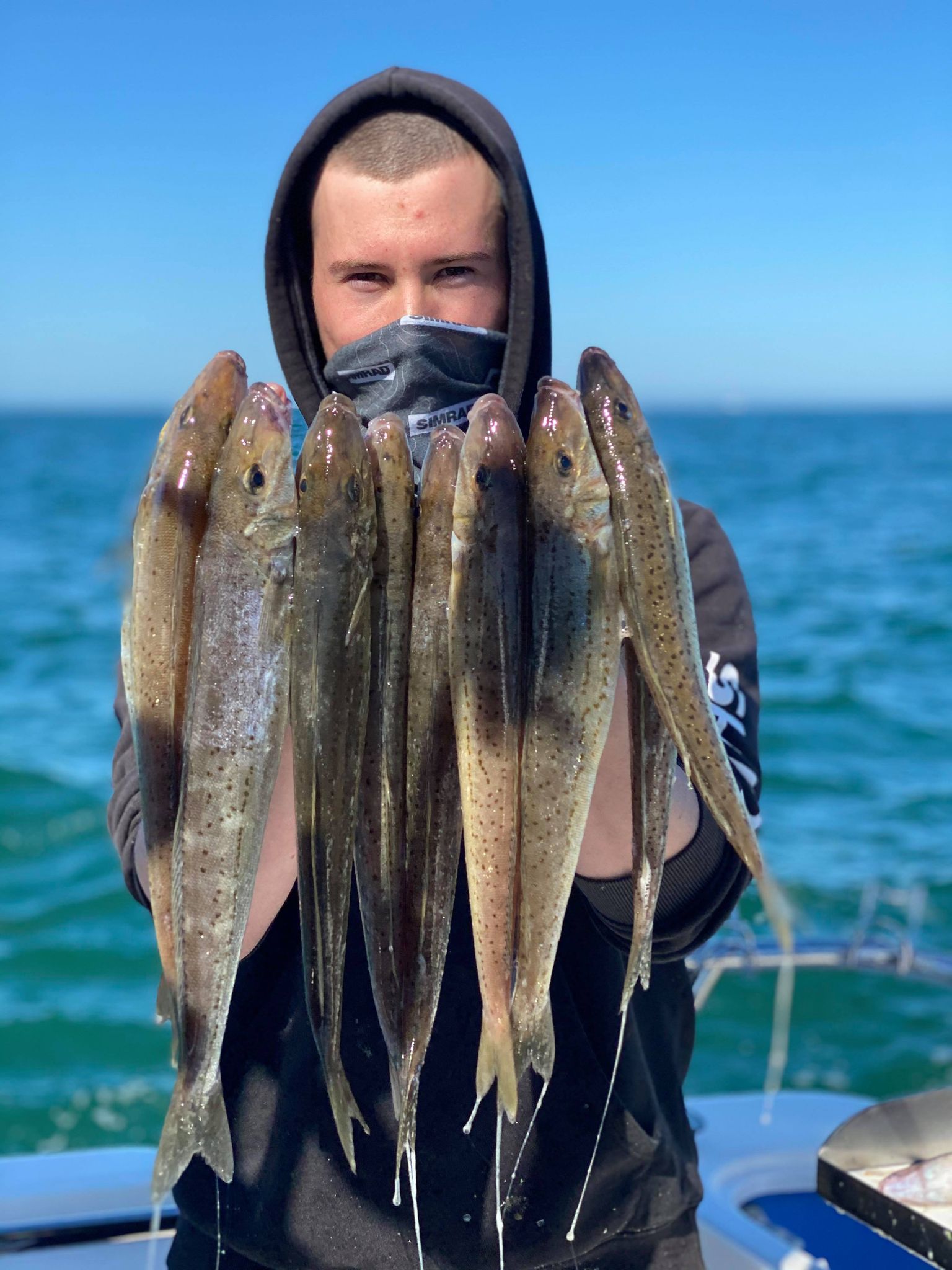 The Queenscliff cut has been on the improve this week with some great reports coming in from the land based fishos. Fishing the slack water of the high tide has been most productive with silver trevally and salmon both showing up in good numbers with fish reaching over 40cm. Worm style soft plastics has been the most effective with the Gulp turtleback worms being the hot lure, however bait is still getting plenty of bites.

Waranga Basin has been hit and miss with some people getting onto some excellent sized Redfin over 40cm and others finding it very tough. Trolling has been the best method with the shallow warmer parts of the lake producing the best results. Shallow divers or trolling soft plastics have worked the best throughout these areas. If trolling in the deeper sections using a stinger soft plastic rig with your hard bodied lures has worked well if the fish are feeding in these sections. Around the old wind vane and Harrimans point have been going alright but the main thing is to persist until you find some fish that are feeding.

Things are starting to move a little in the local channels with a few reports of some Yellowbelly getting caught out of the Main Eastern while casting Zerek Fish Traps and Jackall Mask Vibes. Scrub worms are also a great bait for finicky fish.

The Shepparton Suburbian lakes including Kialla Lakes and Craigmuir lake in Mooroopna are starting to warm up a little which should see an increase in Yellowbelly activity follow. Casting Jackall TN60’s and black grubs or Keitech soft plastics rigged with a beetle spinner blade proved successful last year on these local fish. A scrub worm suspended under a float is also a good way to target hese fish and a great way of getting the kids out for a fish as the weather starts to warm up.

And just like that, Cod season is closed for another year. There was some very healthy cod caught to close the season with the biggest report coming in at 94cm caught by local angler Luke! 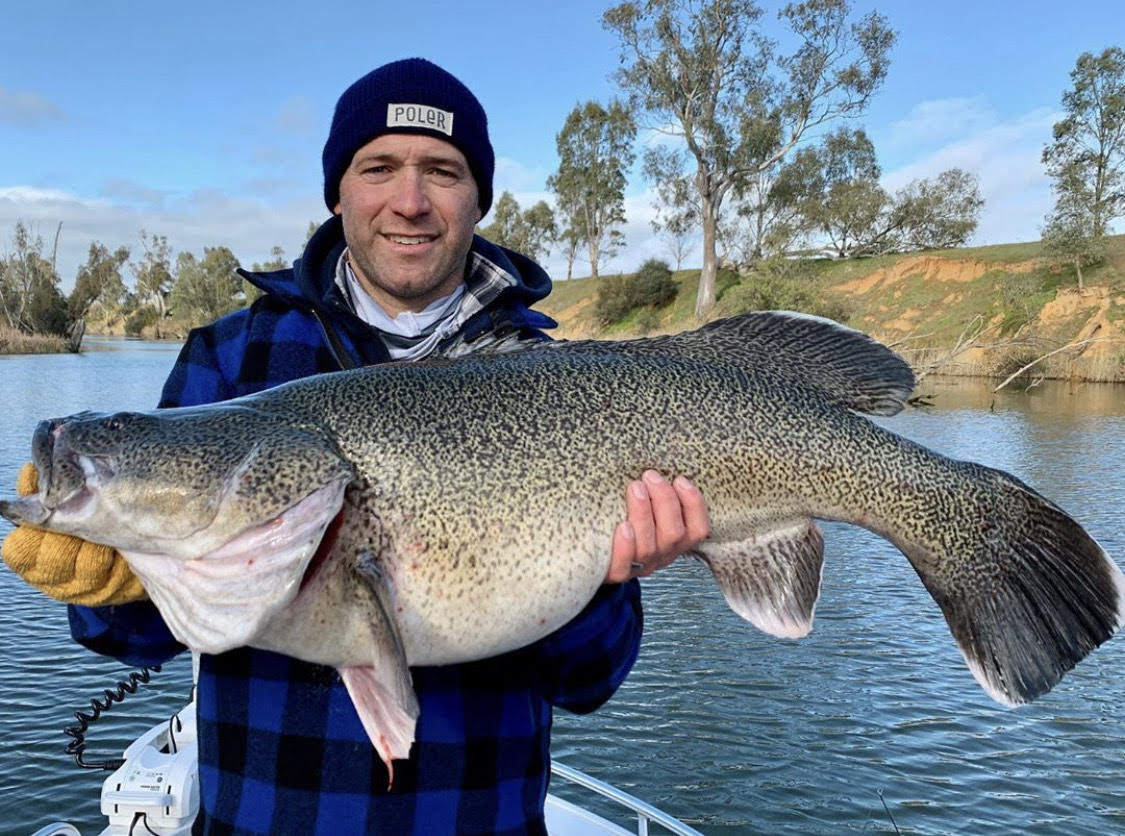 This spring should be on fire, with the rain we have had this winter and with the warmer weather on the horizon. We have already started to hear reports of some healthy looking Golden Perch caught near the flour mill at Bridgewater some measuring up to 45cm in length. Casting Jackall TN60 vibes around Laanecoorie and Bridgewater have been accountable for some great numbers of healthy Golden Perch. Jackall Mask Vibes is also a great alternative; the colour Ghost Bluegill is a great colour option.

Not many reports currently from Cairn Curran but with the warmer weather pressing it would be worth a look, once the Golden Perch start going out here it can be a very rewarding fishery. The odd yellow belly is getting caught near the wall on scrub worms or vibes.

With the warmer weather pushing through the reports are starting to flow in from Lake Eppalock. The redfin are still a little finicky but just stick to the schools and put the time in and you should be rewarded. Troll along in around 25ft of water until you’ve caught one, go back over the same area and start to cast ice jigs or plastics into the school. There are a number of smaller reddies around at the moment but stick to the school because usually there will be a few bigger ones amongst them.

Campaspe whilst still dirty is starting to produce some good yellow belly. Local anglers have had good success on worms whilst keen anglers Will and Jed had a good session this week managing to get themselves both one yellow belly casting smaller spinnerbaits. Casting small yellaman spinnerbaits and vibes this time of the year will start to see many anglers rewarded with some good quality yellow belly. 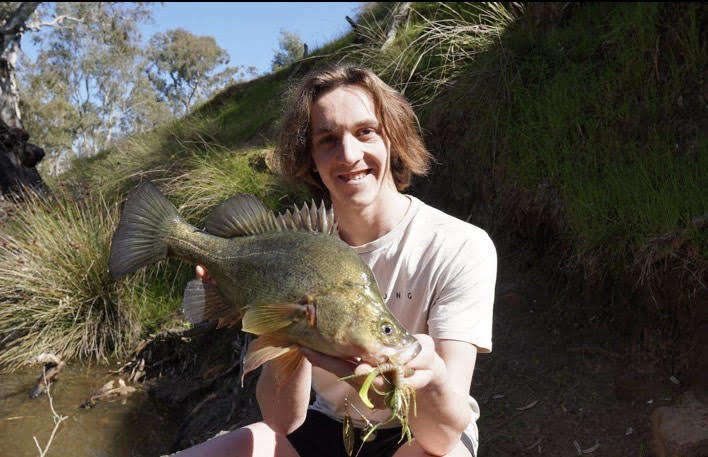 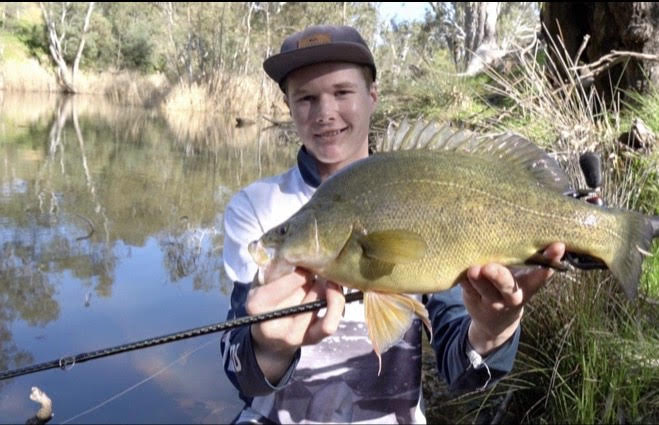 This week there have been a few reports of the reddies and trout starting to bite at Crusoe Res. Most of these redfin are smaller in size however there are some decent ones amongst them. The odd trout are being caught on spinners or powerbait. Kennington and Lake Tom Thumb are starting to produce small reddies however these fish haven’t been in great numbers. Wait until those warmer days to see these places firing. Spinner or small plastics like the Strike Tiger nymphs
Lake Weeroona is a great option also to help get your family out and enjoy the warmer weather. There have been some monster carp caught by using corn unweighted as well as the odd redfin and catfish. Local angler Zac was lucky enough to score himself a PB carp from Lake Weeroona. 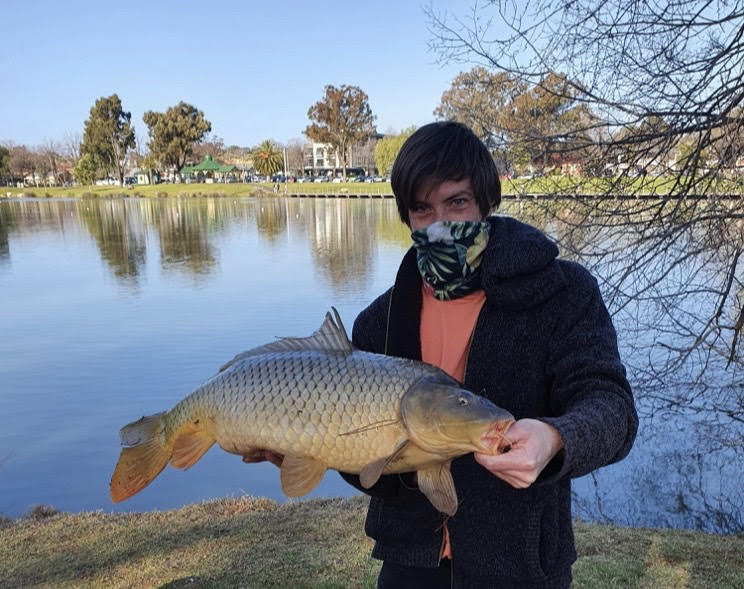