The Geelong waterfront is still attracting a lot of fishing attention this week for the land based fishos with some great reports of both snotty trevalla and Snook. Anglers using chicken for bait have been doing quite well on the snotties, a little trick is do let your chicken soak in tuna oil to add extra scent to attract the fish to your baits. Casting soft plastics have been landing plenty of fish also with plenty of other species latching on such as pinkie snapper, Salmon and flathead. Snook have been a very popular target species again this week with large numbers of anglers heading down in hope to encounter with a few and the action was red hot. Casting 70mm diving hard body lures have definitely been the most popular and productive method to target them with fish reaching about 60cm in length.

St Leonards through to Queenscliff remains quite the hotspot for king George whiting with anglers finding some quality fish and plenty of boats finding their bag. Fishing the tide change has been key with fish biting most times of the day with fresh squid being the best bait which you can catch not far from the whiting. Calamari have been in reasonable numbers, not exactly on fire but with some calmer weather coming up they should like the cleaner water and expect to see some good fishing come from it. 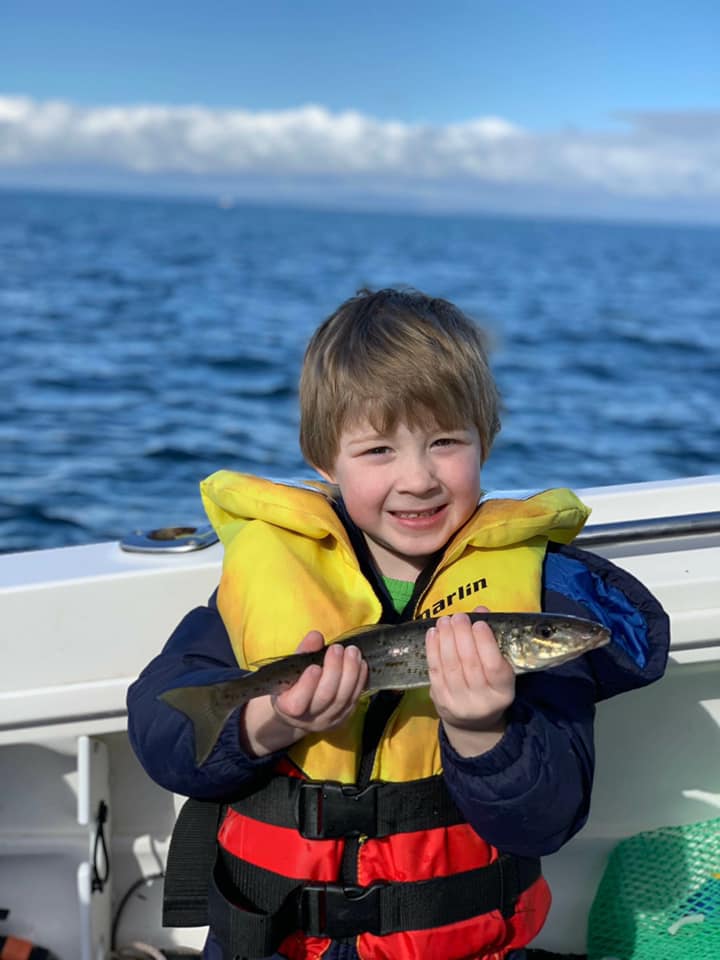 Offshore between Barwon Heads through to Cape Schanck is still having some barrel tuna reports roll through with fish to 100kg being caught, trolling skirted lures has been most successful with the JB little dingo being a standout. Gummy sharks and snapper are still chewing quite well off Barwon Heads too with 30 metres of water being the most productive depth with fresh baits working best. Port Fairy has had some fantastic fishing as of late and in particular the bottom fishing with some tasty critters finding their way onto angler’s hooks. Owen Westwell and I got out over the weekend landing multiple gummy sharks ranging between 10-15kg with plenty of other species on slow jigs such as nannygai, latchet, coral perch and pinkie snapper with 100gram jigs working best. 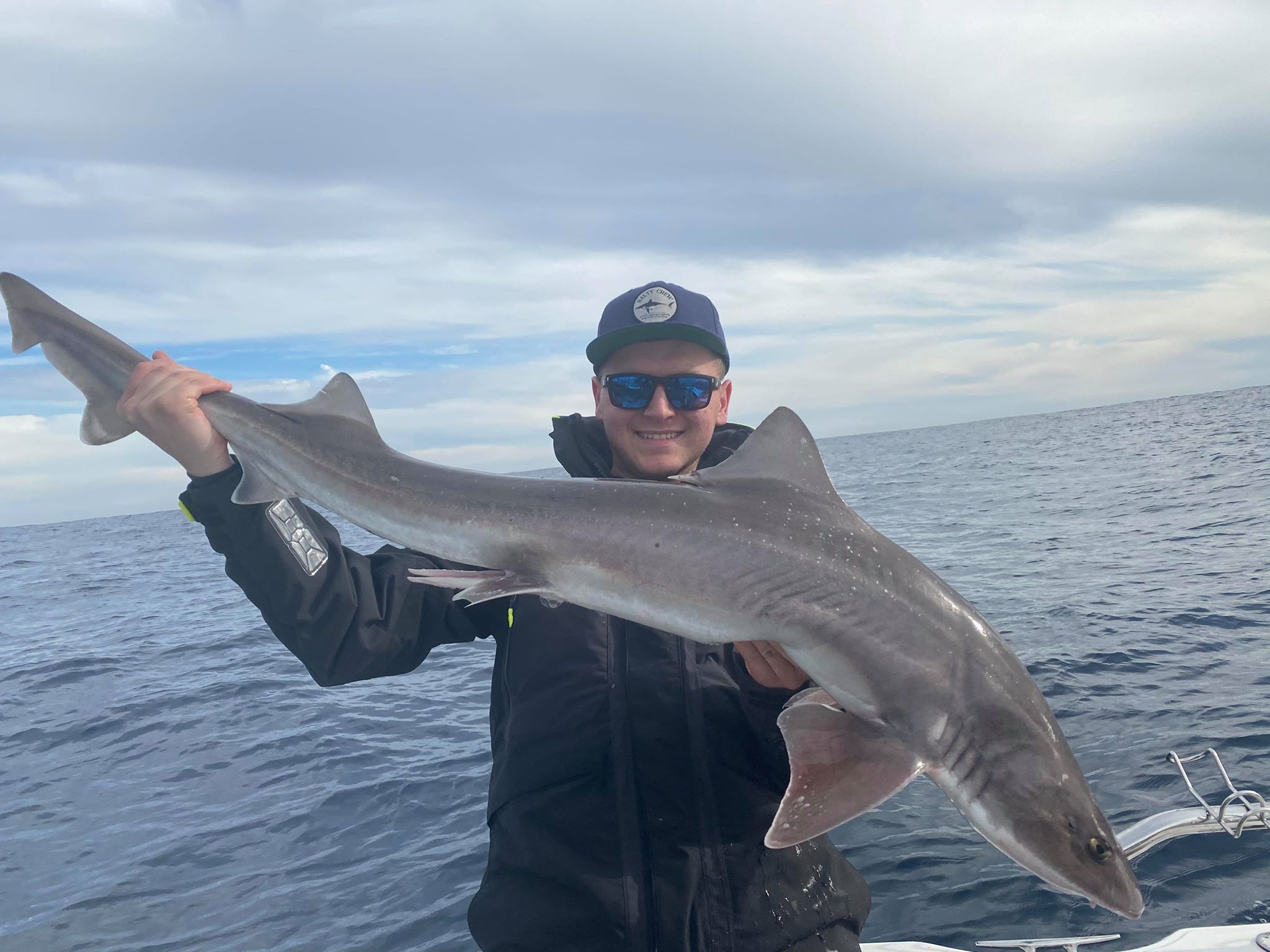 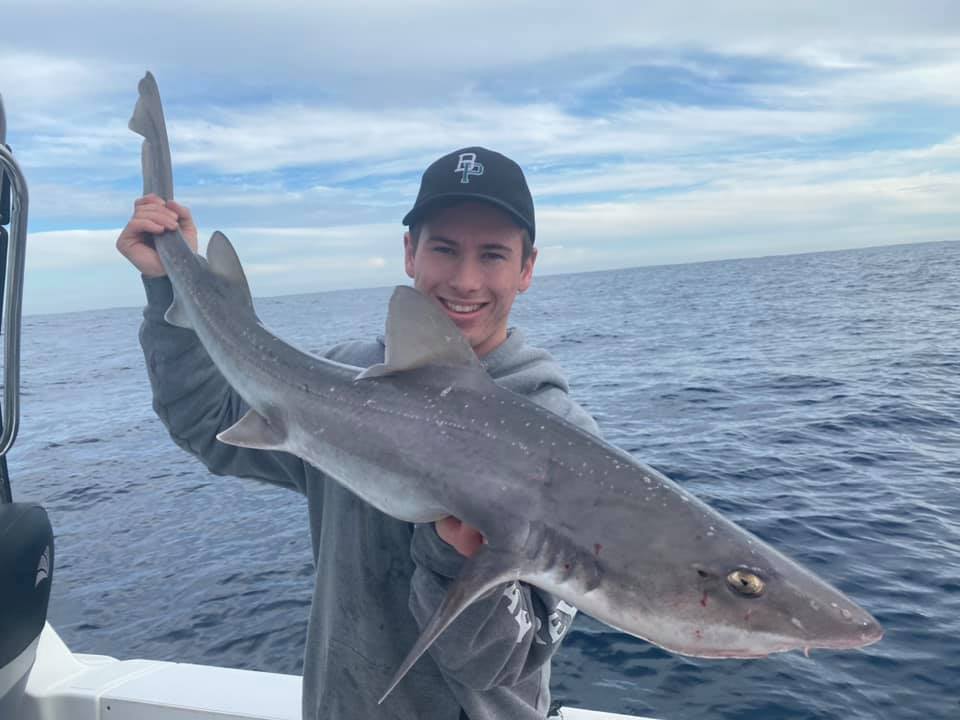 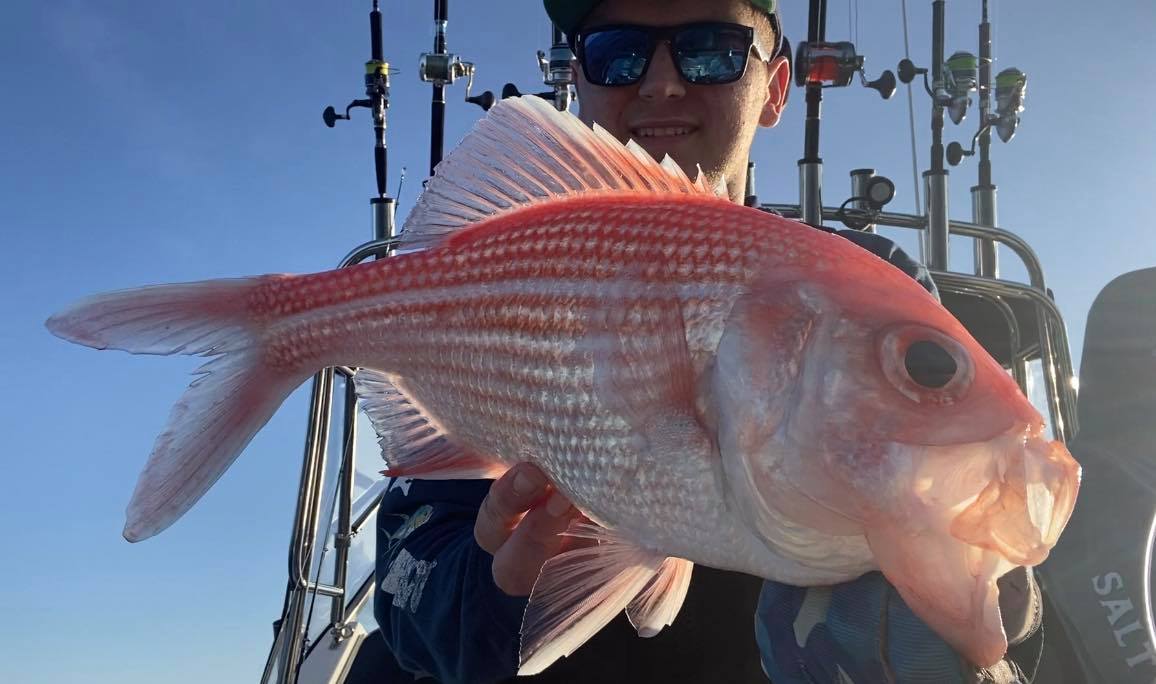 The Barwon River has been offering some good fishing as of late with carp and redfin providing some good close to home action. Redfin have been responding well to small soft plastics or hard bodies and the carp have been going well on corn kernels. 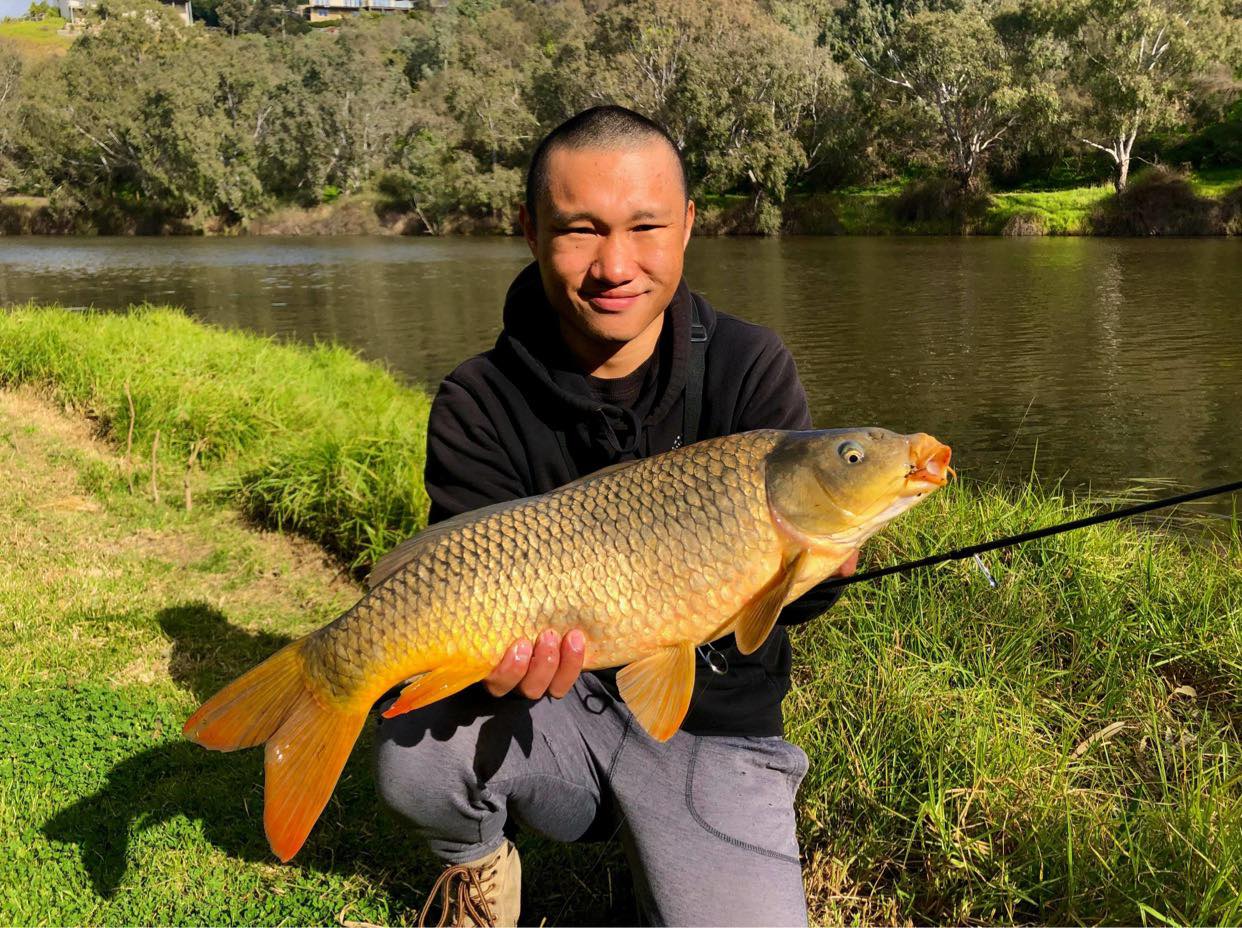 There have been a few more of the stocked Rainbows getting caught out of Shepp lake but they seem to have slowed down a bit over the last week. Strike Tiger Nymphs on a small Jig Head are working the best and with a bit of Strike Tiger Trout scent seems to help with getting the bite. Trellys Shepp Staff members Nelson and Brad had a quick session before work and managed to land a few while casting the Strike Tiger Nymph in Pumpkinseed colour on a Strike Tiger 1/32oz jig head. 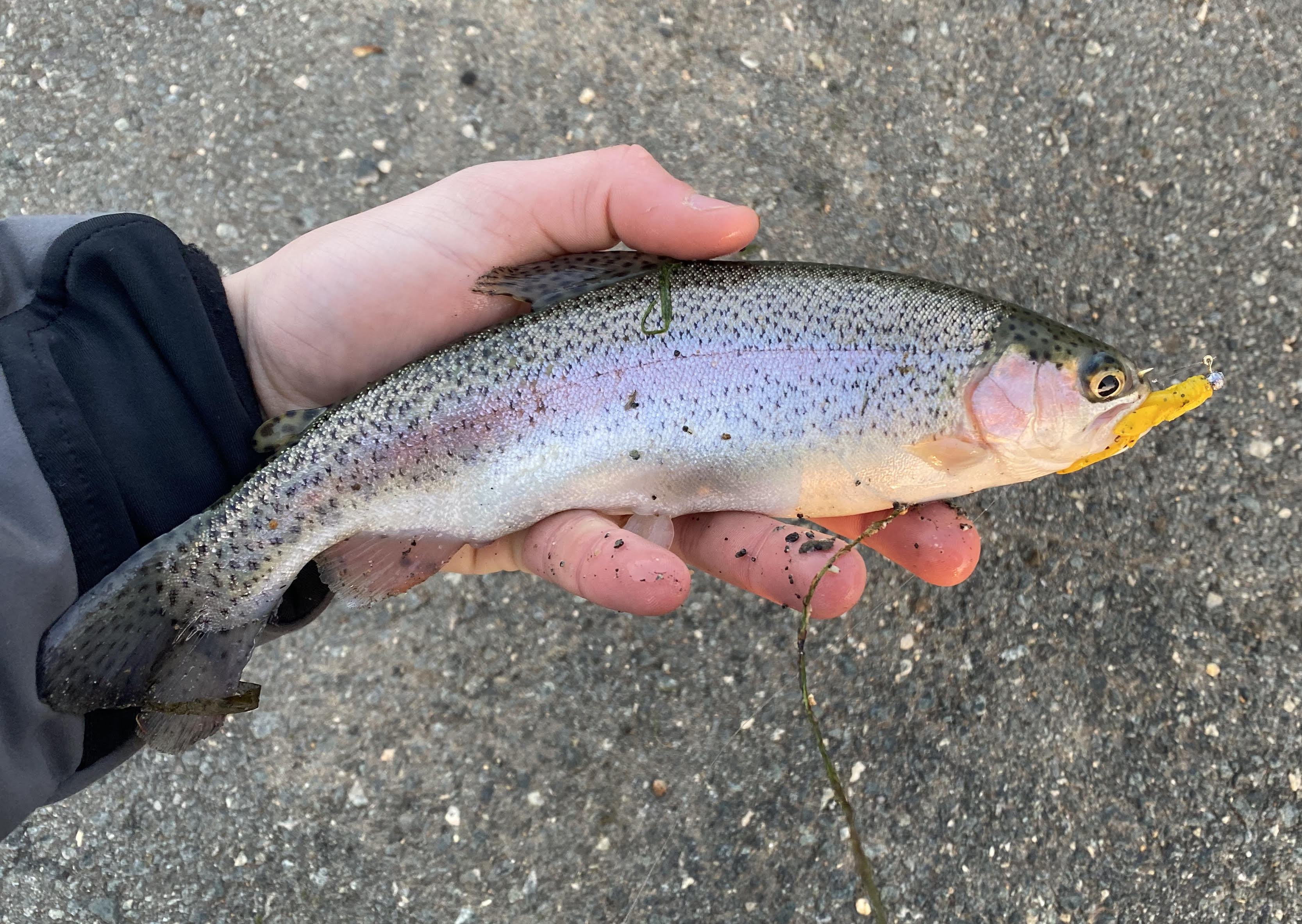 Redfin are becoming more of a regular catch and we’ve heard some good reports of fish schooling up and feeding hard. With the water level up it’s a good idea to troll around the usual areas such as Harrimans point and the Caravan park until you sound up a school and then drop down small baits and plastics to get them feeding hard.
Yellowbelly have become more of a regularity out of the Basin over the last year and will often come as a by-catch while trolling for Redfin. If looking to target Yellowbelly in particular try and find some structure such as sunken fences or trees as these will usually hold fish. Casting small soft vibes or plastics usually work well with enticing a Yellowbelly or two along with some good sized Redfin.

Eildon is still very much hit and miss and living up to its reputation for Cod with long days on the water for one or two Big fish. The Murray Cod have been in great condition with most fish being extremely fat and well fed. If you can sound up a school of Redfin or other baitfish you’ll usually find a Cod hanging around waiting to pick off any stragglers. Working big plastics and swimbaits around these baitfish as well as near rocky points has worked the best for most heading over to Eildon. Throwing out a bait is also worth a go with Chicken bites or Yabbies working the best.
Trout have been a bit slow around most areas but Bonnie doon near Hutchinsons Rd and at the beginning of the Big river arm are always worth a go. Trolling Tassie devils has been going well. Flatlining in the morning and the switching to downriggers or led line has worked once the sun has risen and the fog clears. 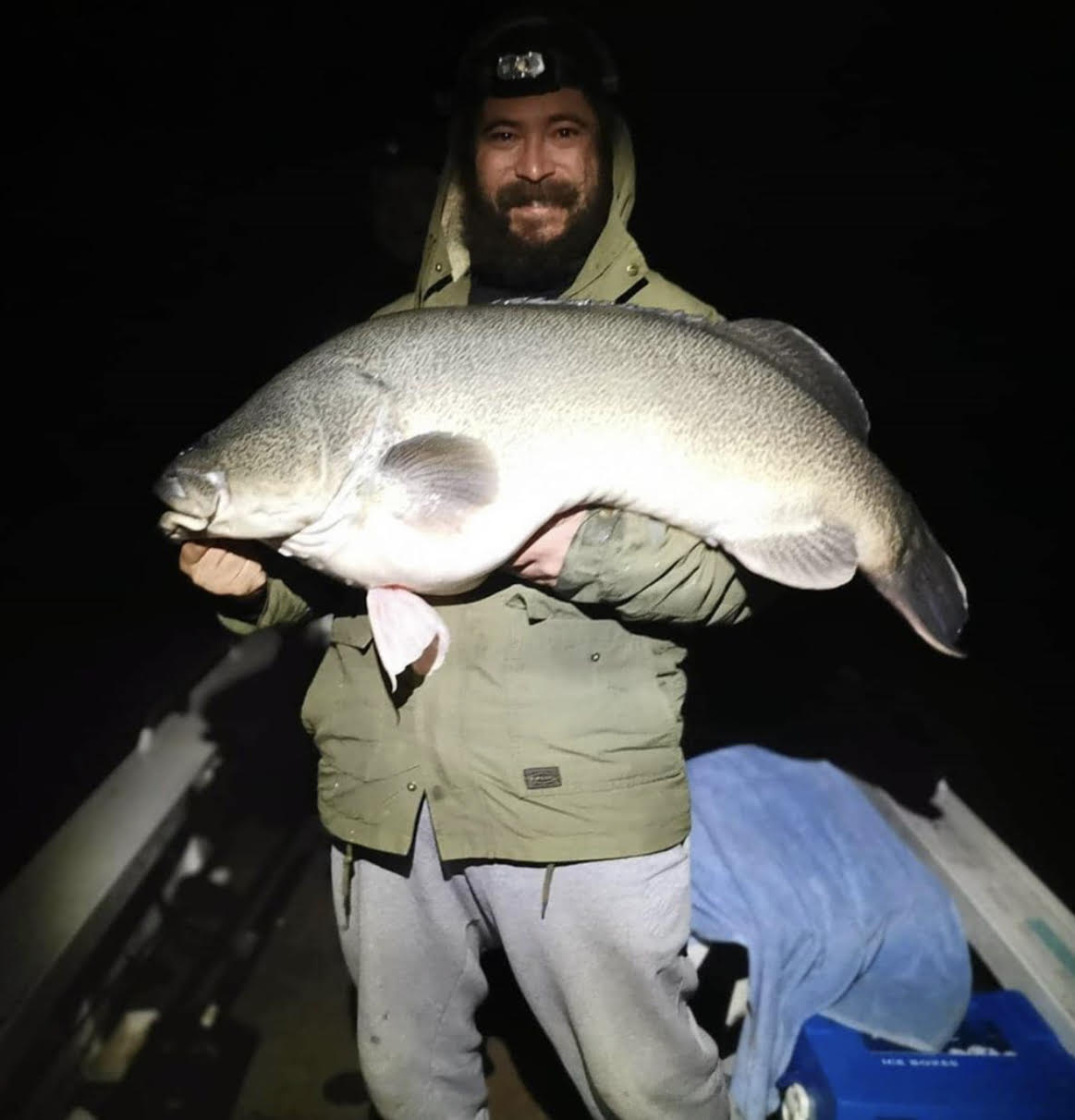 Anton with a Nice fat Cod he caught out of Eildon last week. 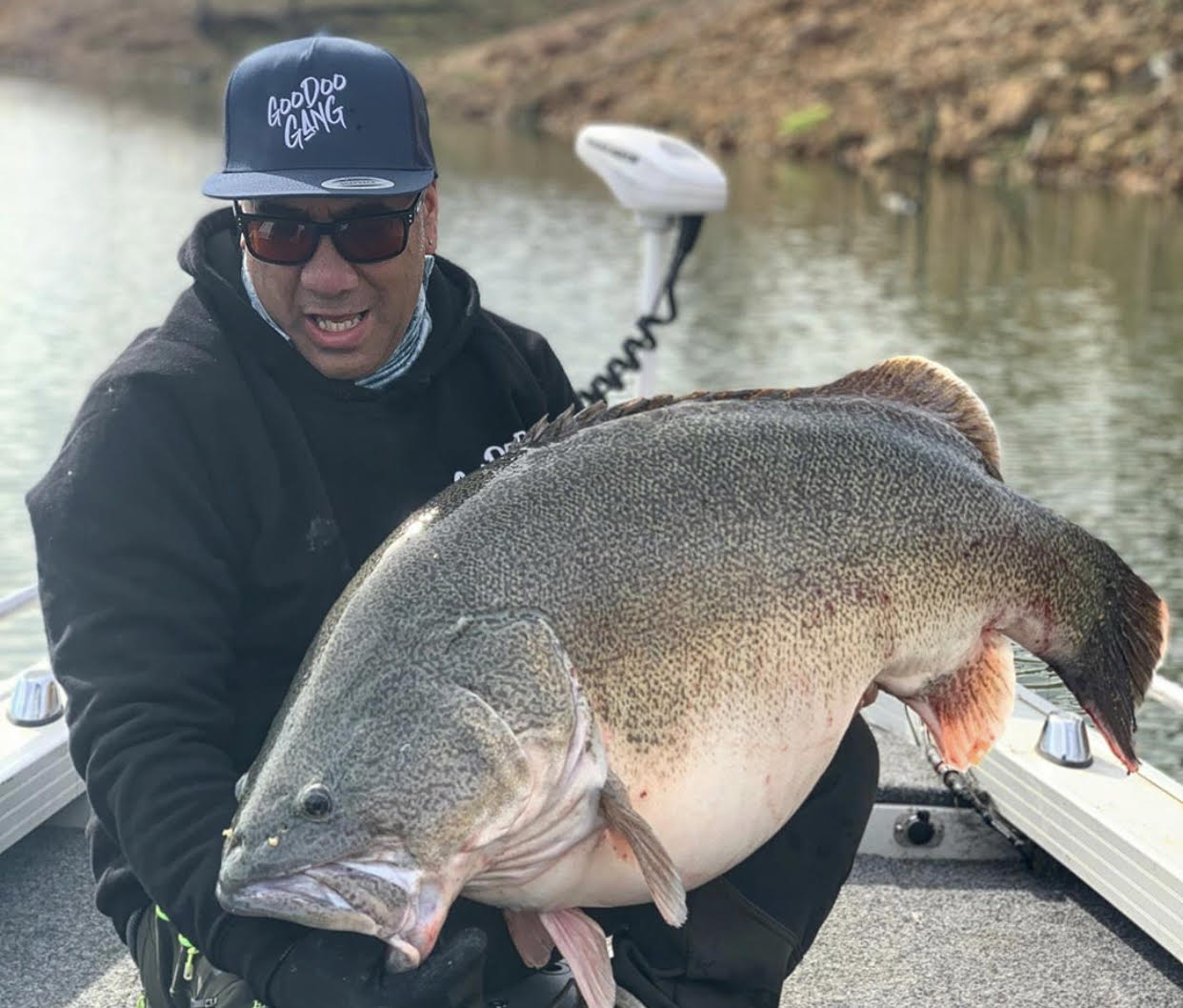 The Loddon River has been hit and miss recently however people who put in the hard work have been rewarded. Local angler Matthew Walker was able to get out during the week and caught a nice 60cm cod trolling an old mate lure. Sticking to the deeper areas and trolling has been the go to for the bigger Murray Cod. Surface lures such as the Aussie Crawler have been good in the early mornings or late afternoons. Chicken is still the go to if using bait with the odd fish picked up here and there. 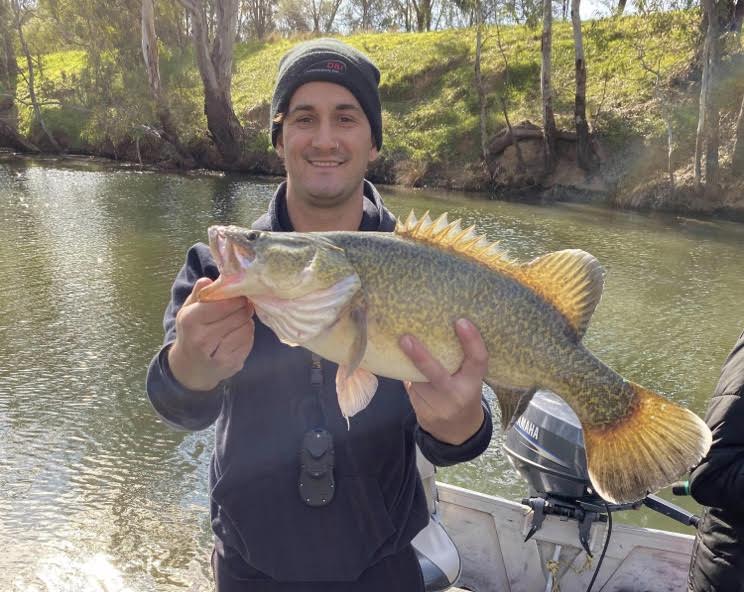 Cairn Curran there’s the occasional quality redfin being caught by trolling small hard bodies such as your crazy deep RMG’s. White colours seem to be working the best during the day. Troll around in 25-30ft and you might just find yourself a decent feed.

Locally Eppalock is still producing some good numbers of Redfin. Troll along until you’ve found the school then cast jigs or plastics into the schools. A large proportion of these fish are relatively small but if you stick to it there are usually a few better size ones amongst them.Brighter colours seem to work the best in jigs and plastics.
People are still getting a few good sized yellow belly casting mask vibes along the rocky edges. Use a scent to help entice the bite. 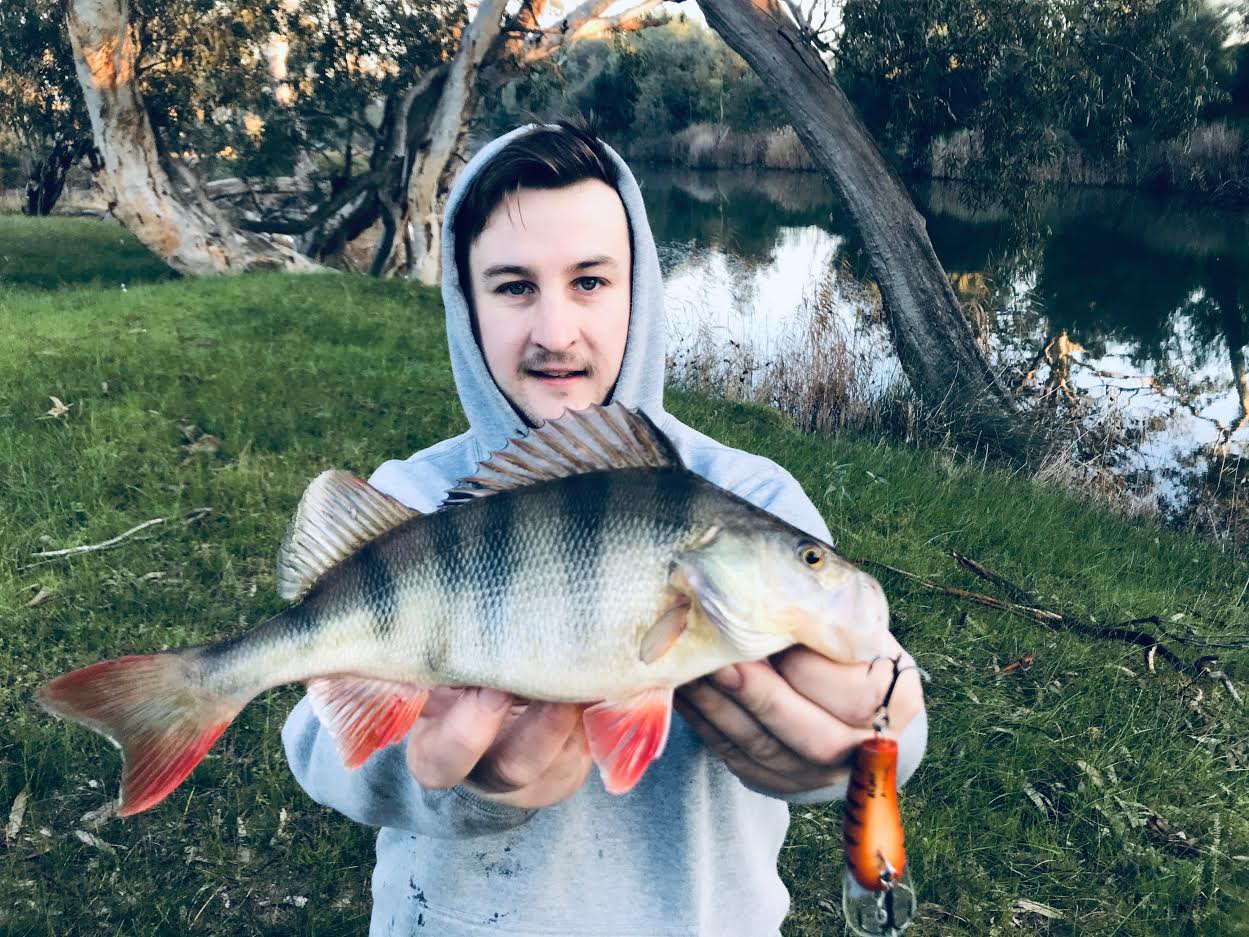 To the disappointment of many anglers the Campaspe River is still very dirty. Just the odd fish being caught on scrubbies or chicken but very quiet otherwise. It is worth still  trying early mornings and late afternoons casting surface. Let’s hope the water cleans up sooner rather than later.

Lake Tom Thumb has been the pick of the bunch, with some good numbers of stocked trout being caught. Remember on the windy days to fish the wind blown banks. Powerbait has still been the standout bait particularly in Sherbet or Rainbow. Using these baits under a float or on the bottom with a running sinker rig both produce good numbers of fish.
Alternatively if you would rather cast lures, Celta spinners are still the go, particularly in brighter colours. The occasional redfin is being caught also on worms.

Hi guys, can you please add my email to your fishing report posting. I have not had a current report for more than 6 months.
Thanks again.
Cheers T