Starting inside Corio Bay and as expected the pinkies are still there and still in great numbers, better reports have come up from the north shore area but these fish should be scattered right through the bay.  Snotty tevella continue to keep land based fishos amused as they still remain in good numbers and are proving to be very hungry. The bait fishos have been having great success with baits such as chicken and pipis have been accounting for plenty of fish and so are the guys casting soft plastics with 2” curl tails style plastics working best.

The wild weather we have had this past week has really fired up the Whiting fishing along St Leonards through to Queenscliff with the keen angler getting some cracking results just on dark, the fish have been reaching upwards of 40cm and bag limit captures have been quite achievable.

The surf coast estuaries are still continuing to fish quite well for black beam with most systems fishing well with Ecogear vibes and Zman soft plastics being the hot lures of choice with fish reaching 35cm, they have been schooling quite tight so when you catch one there is a fair chance there will be a lot of his mates in the same spot! Mulloway have been chewing pretty well also with soft plastics being a standout and even trolling deep diver lures such as Samaki Redics proving lethal. Nathan Wright has had some great success on the jewies and they have been reaching a fantastic size, large paddle tail soft plastics has been his lure of choice. 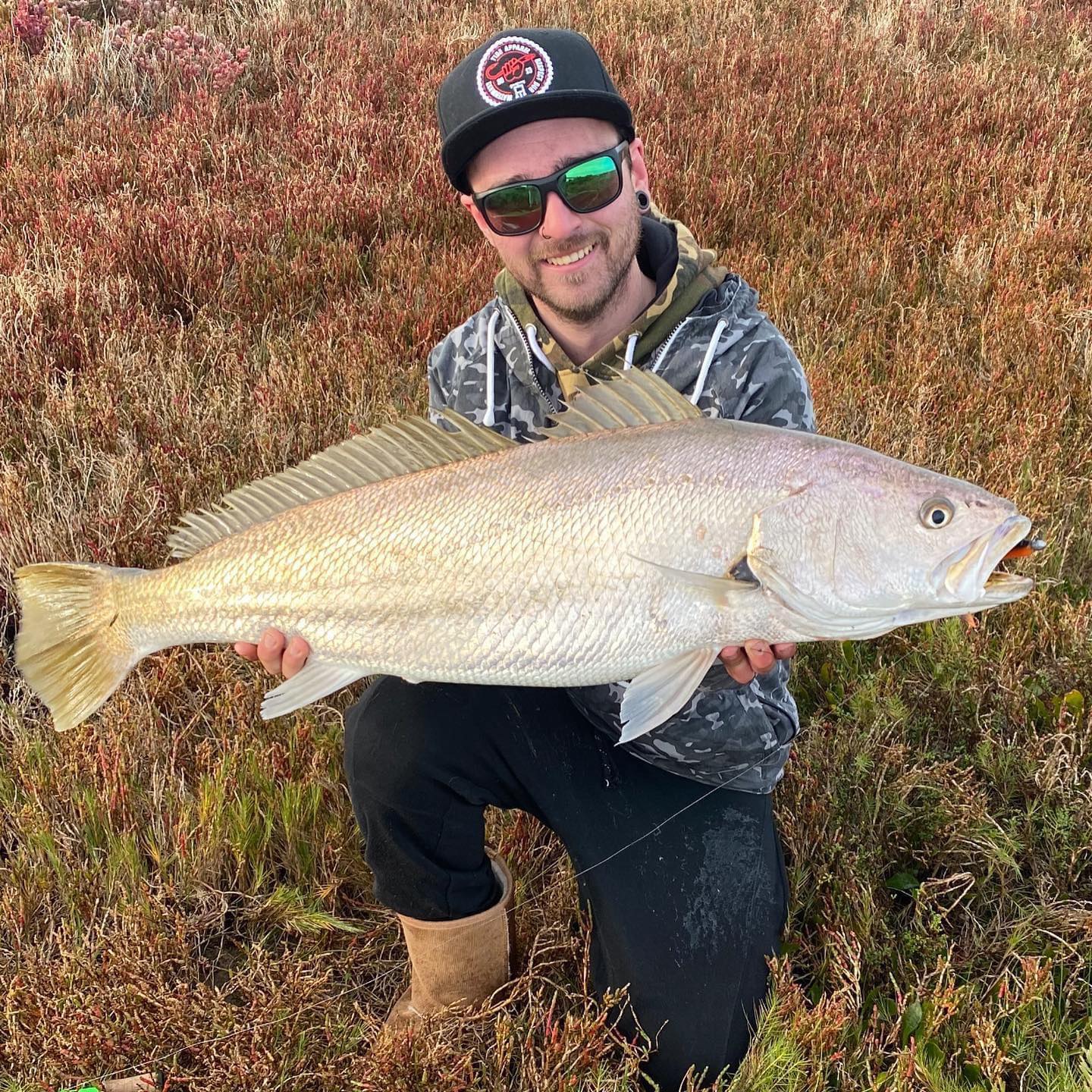 Wurdi Buloc has lived up to its name as the lake of 1000 casts over the past week but to the anglers that are putting in that extra cast are managing to put some soild fish on the bank. Andrew Orchard made another trip down trying to back up his last success and did by landing redfin to 40cm whilst casting Daiwa double clutches in black and gold. 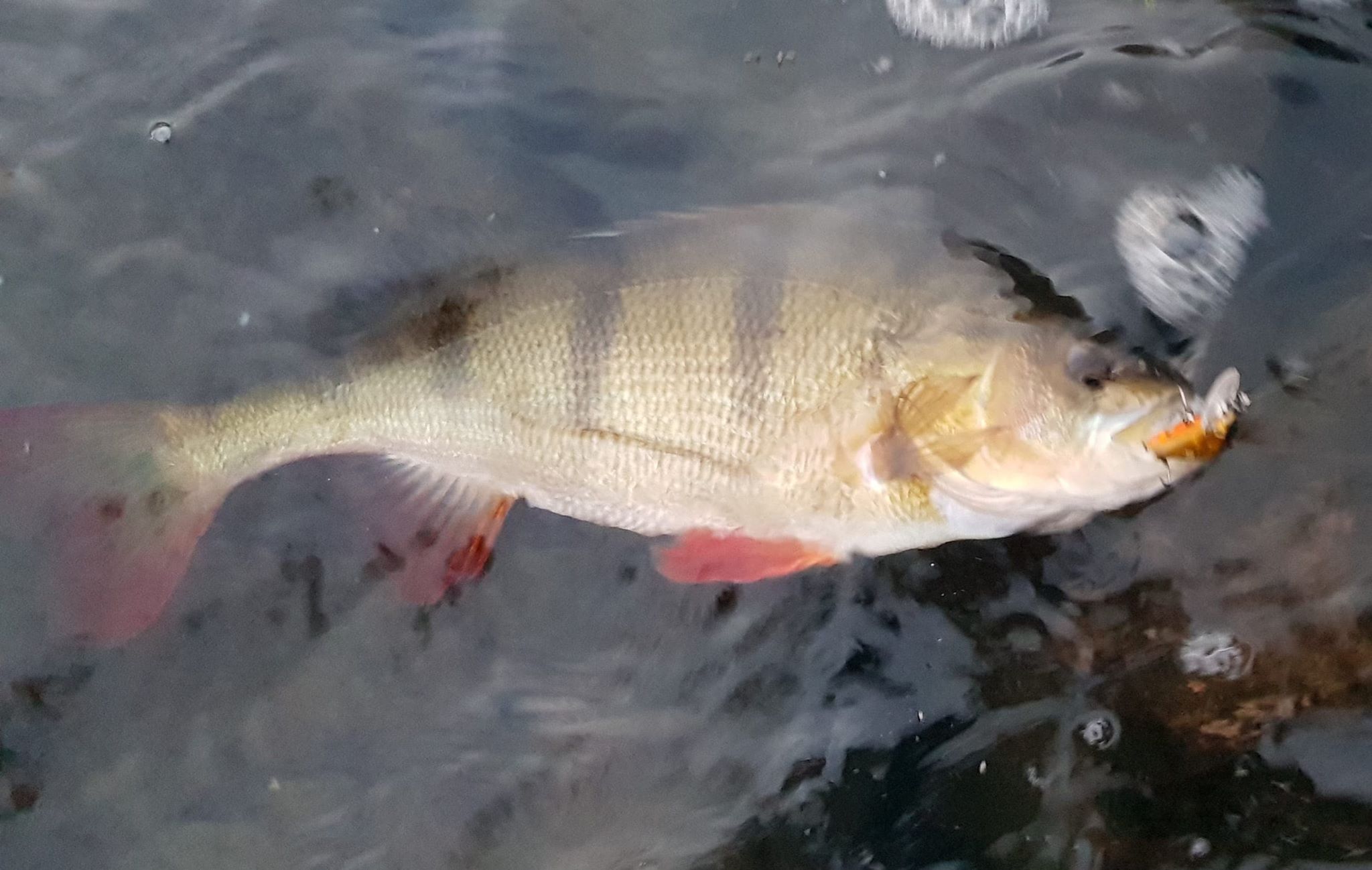 Lake Purrumbete has had a few trout reports roll in with down rigging deep has been the most successful method for targeting them with fish reaching about 1kg in weight. Tassie devils and F7 Rapalas in natural colours have been great lure options to troll. Anglers casting over the shallow weed beds have also been finding some quality fish in the lake too with Bent minnows being a standout lure with fish reaching to about that 4lb mark.

The Shepp Lake has been producing some more of the Small stocked trout over the last week, some days have been a bit tough but mixing it up between baits such as Powerbait and small soft plastics like the Strike Tiger Nymphs and Keitech 2” Easy Shiners has usually been successful. Nick Took the kids to the lake the other day where Nate managed to get this trout while using Powerbait suspended underneath a float. 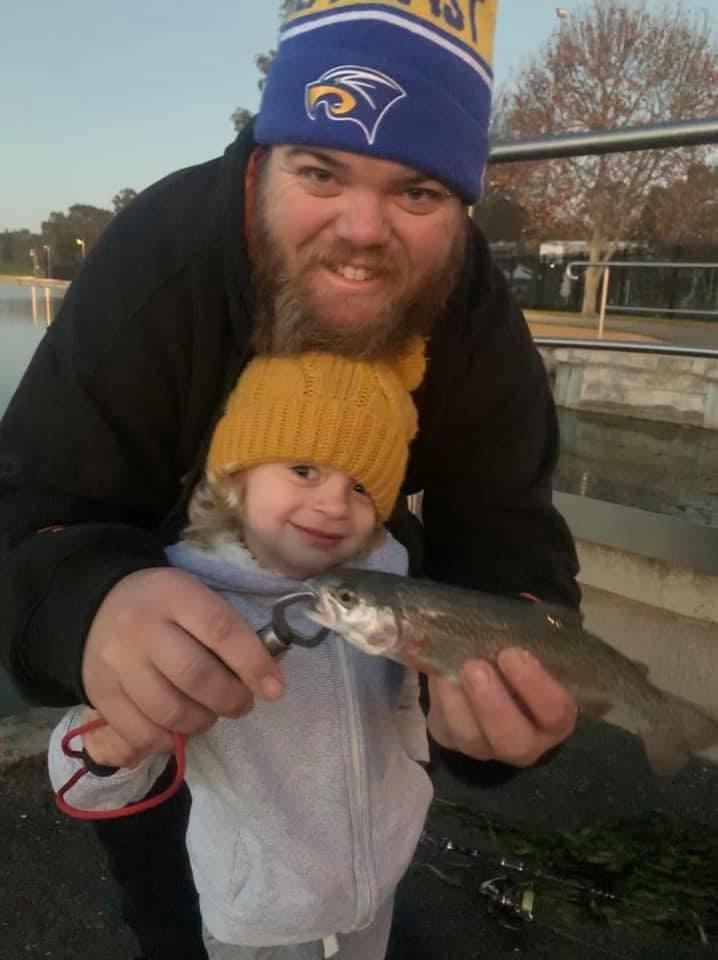 Nick also reports of some small Redfin getting caught out of the lake while slow rolling Keitech 2” easy shiners and small hardbodies like the Daiwa Double Clutch. With some nice sunny days starting to become a little more regular it shouldn’t take too long until we see some Yellowbelly getting caught out of the Shepp lake. Small plastics rigged with a beetle spin blade worked great last year out of the lake and are a good option to try and minimise the issues of getting caught up on weed. Domenic was in our Shepparton shop over the weekend and purchased a new Daiwa Tatula Swimbait rod, he didn’t waste any time christening it with this beauty caught on the cast. 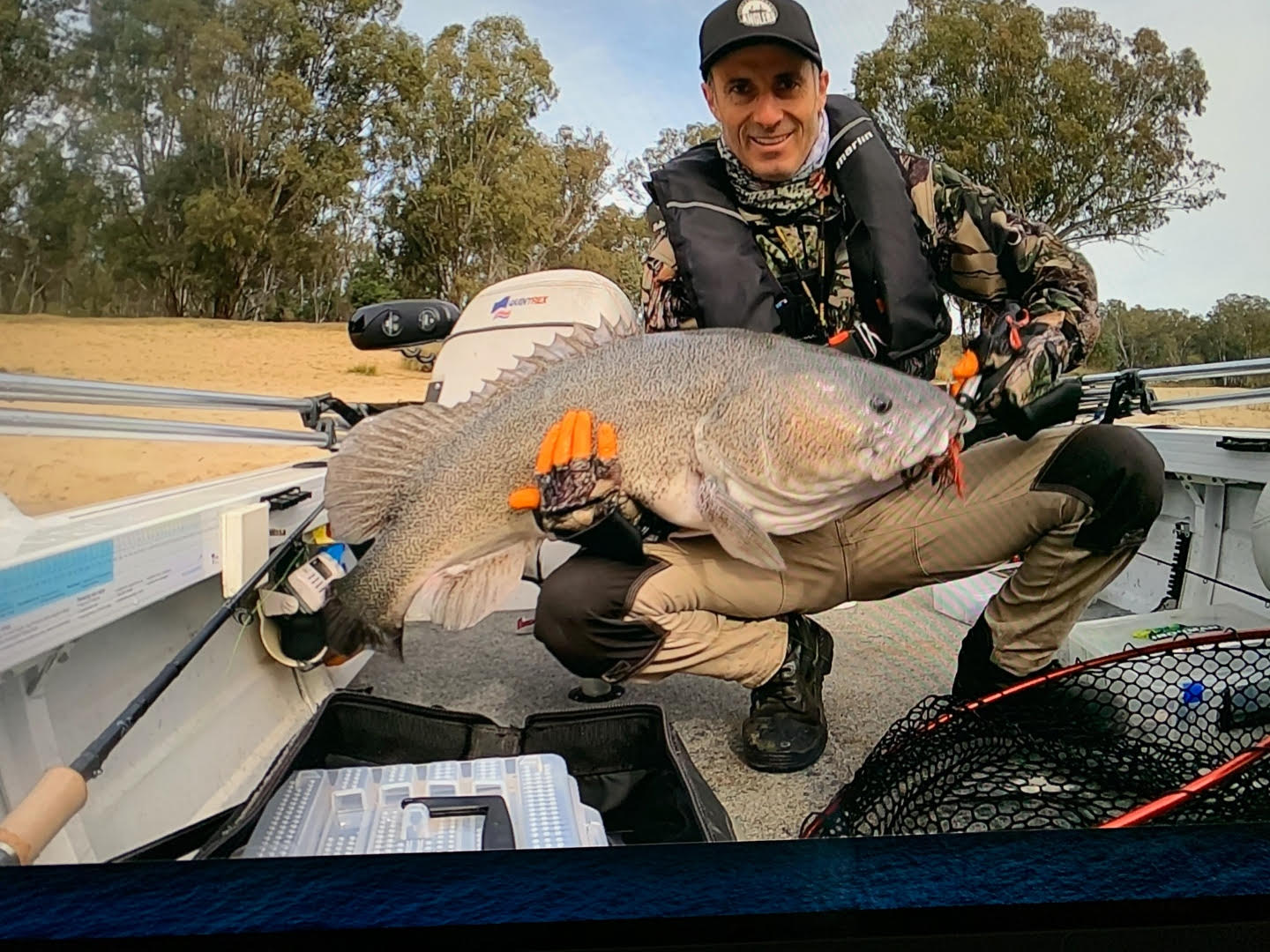 There’s been a handful of reports of some nice Redfin getting caught near the caravan park. We had one report of some guys catching around 60 in a session by trolling until they found a school and then working plastics over the area that they had found productive. Crayfish have also been going ok at the Basin however you have to sort through the females to get to a keeper sized male. Adele gave the Crays a go over the weekend and managed to get this keeper while using sausages as bait. 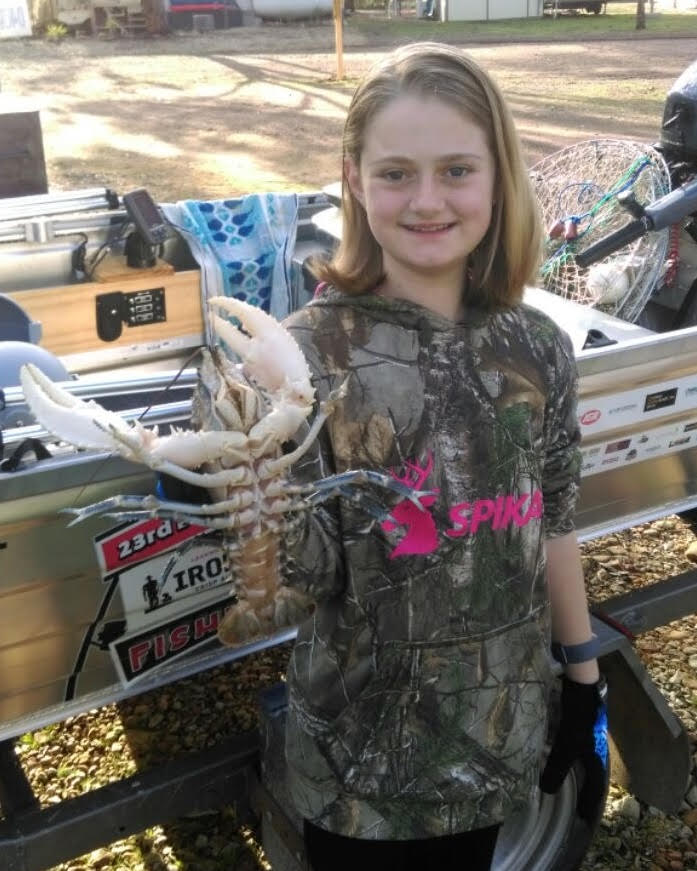 Water clarity in the Loddon is still very good, it's worth casting spinnerbaits in around tight timbered areas. There have been a few reports of some good cod around the 80cm mark being caught in the past week. These bigger fish seem to be sitting in bigger pools currently and take some persistence to get to bite. Early mornings and late afternoons casting surface have also resulted in some good fish being caught from Newbridge through to Bridgewater.
If bait fishing the standout currently is chicken, but scrubbies have also helped produce the odd Yellow Belly.

Water clarity is relatively good at Cairn Curran and is worth putting in a day on the water here.There are a few reddies and the occasional yellow belly being caught trolling the drop off ledges and rocky banks. These fish have been caught mostly using small hard body lures such as the RMG’s or if casting the likes of the jackall mask vibes and TN60s  Late afternoons seem to be the best time to target these fish.

Locally Eppalock is the pick of the bunch currently. There are some great reports coming through of good bags of redfin being caught, there are still lots of smaller ones around but if you are persistent you should be able to get some good quality ones. Troll in around 15-20ft of water, once you’ve picked up one on the troll anchor up and cast plastics or jigs into the school and be persistent to try and entice the bites. Stand out in plastics are bright colours with chartreuse being the number one go to. Jigs in all colours seem to be working with the Gillies bobbin being the standout.
Few reports of some good Yellow Belly being caught as well, some around that 50cm mark. It’s worth using Jackall Mask Vibes and casting the rocky point edges, or the wind blown banks.

Unfortunately due to the rain we have had over recent weeks this has made the water rather dirty and made fishing difficult downstream in the Campaspe River. Bait fishing is the most effective way to try to get a Murray Cod or Yellow Belly. If chasing Murray Cod Trellys Scented Chicken has been a great option with  small yabbies or scrubbies is a great way to target these the yellas
If you wish to persist with casting lures, try something with a rattle such as a doozer or Megabass Vatalion (now in stock at Bendigo). Scents such as Dizzy scent can also help get the bites with the dirty water. Lures like the Mega Pompadour or Bassman Crawler also can be a good way to target cod in dirtier water due to the amount of water disruption they can cause.

Walking Lake Tom Thumb casting spinners is proving to be very productive. Most popular colours seem to be gold or pink, with a slow retrieve it will help increase your chances of a hook up. Bait fishing is also a very successful way to target these stocked trout, Powerbait particularly in sherbet and rainbow has proven to be the most successful.
Kennington and Crusoe Reservoirs have also been fishing well for trout with the occasional reddie also being picked up. It is worth casting a 1’’ Strike Tiger Nymphs to help entice a redfin or trout, these have been a very effective way to pick up some good numbers of fish. Spinners have also been a great way to entice them to bite. Make sure you fish the direction of the wind as the fish seem to be sitting in close to the windy shore banks. If there is weed in the area use a running sinker with powerbait and cast out over the weed. 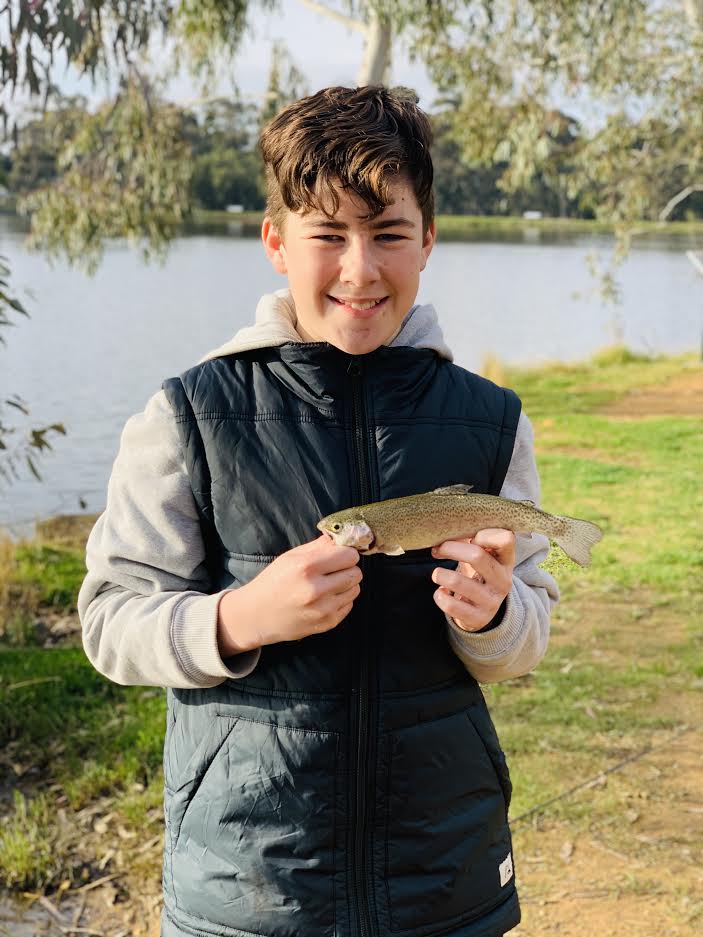 Make sure you head into the local Bendigo store to say goodbye to our loved team member Brenton Smith who finished up with us today. Best wishes for the journey ahead! 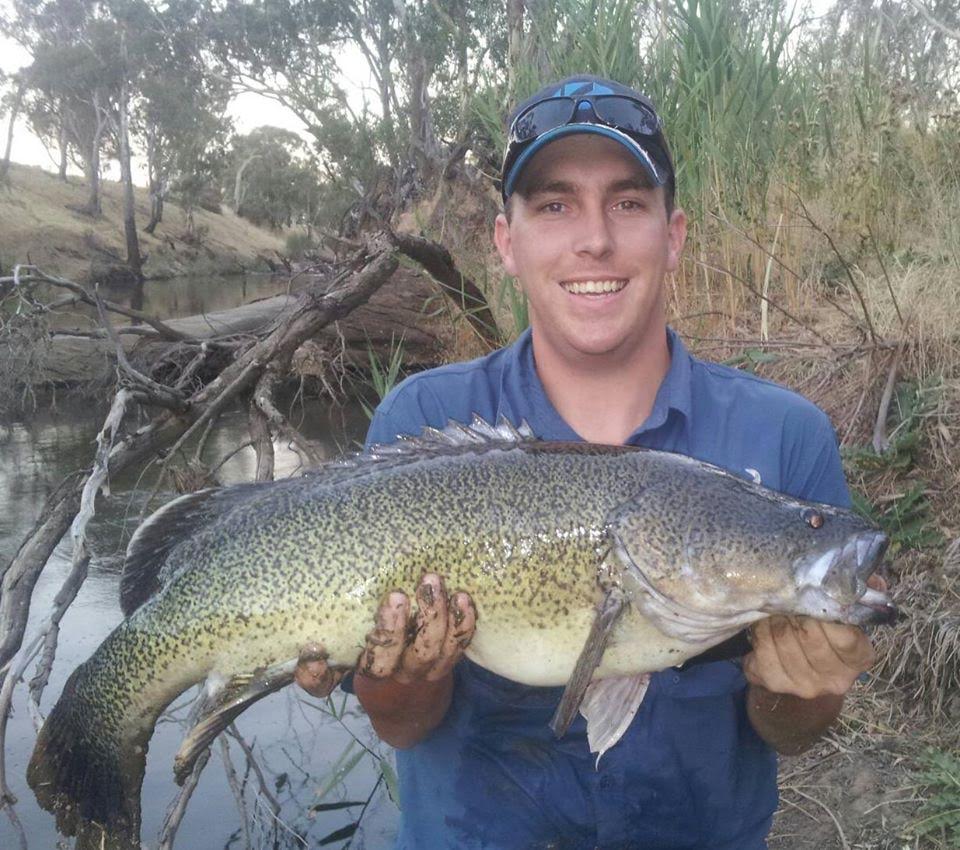