The landbased fishing inside Geelong at the moment is still keeping anglers very amused with a large variety of fish still on offer to those casting lures from the shore. Snotty trevalla, salmon and pinkie snapper still remain in great numbers and the snotties have been reaching a great size. Anglers casting small 2” grub style plastics have been getting the better results however they have also been more than willing to have a nibble on some chicken too. There seems to be quite the number of snook in these areas also terrorizing baitfish and even other angler’s fish whilst on the line! Casting diving lures or slightly larger minnow style soft plastics should get the bites and get you amongst the action. 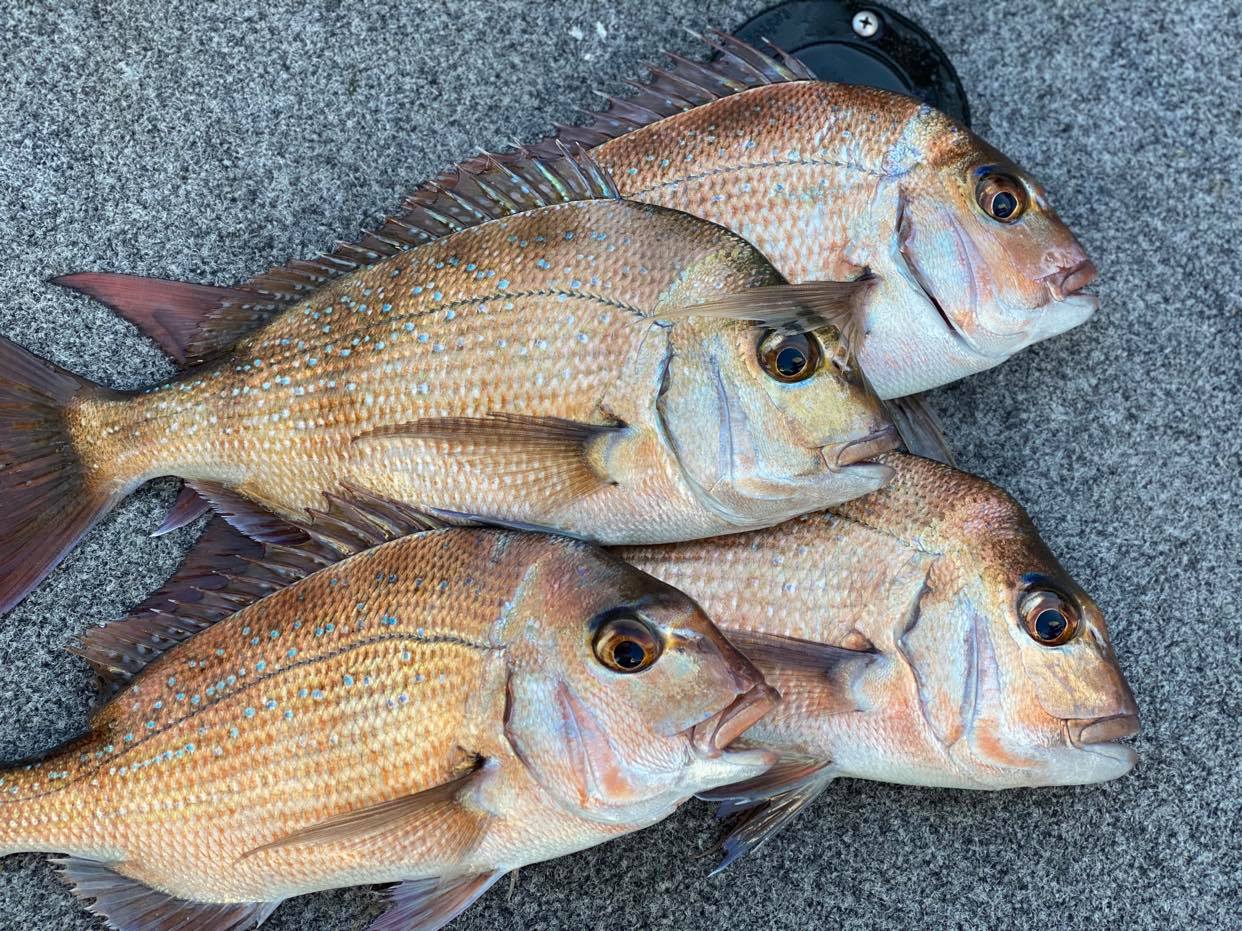 Along the Bellarine Peninsula has seen a healthy variety of species on the chew, although there isn’t many monsters hitting the decks they seem to be in great numbers. Out from St Leonards has had plenty of calamari on the chew along the weed beds in 3.5 metres of water, Daniel Maddalena had a solo mission over the weekend and having no trouble in finding himself a very solid bag of squid in no time. Swan Bay has been holding quite the population of garfish as of late to both landbased and boat fisherman with a few gummy sharks and king George whiting thrown into the mix too, so in a single day you can score yourself a feast of the bays best table fish!

Offshore Apollo Bay has seen some fantastic shark fishing with both school and gummy sharks in fantastic numbers, drifting in 50 metres of water with big fresh baits such as fresh wrasse or barracouta proving deadly. There has also been reports of some large tuna hanging around too off the cape with some school fish amongst them too.

The surf coast estuaries have being fishing quite well for black bream as of late with most systems giving up some solid fish, casting 2.5” grub style plastics and vibes working an absolute treat with fish getting to about 35cm. Mulloway have also made quite the appearance with some systems producing some solid fish with the Glenelg river being a standout. Bait fishing has been most common with fresh squid for bait and casting 4” paddle tail style plastics also accounting for a fair share of fish.

Lake Victoria In Shepparton has been fishing good for Trout and Redfin. Casting Lures and soft plastics has worked the best. During the last week The boys from Trellys Shepp have put in a couple sessions before work and been able to get onto plenty of small Rainbows. They found that the period of first light was the best time to find feeding fish that were more than happy to take small soft plastics like the Strike Tiger Nymph and Keitech 2” Easy Shiner rigged on a 1/24oz or 1/16oz jighead. The best sections of the lake for Trout have been near the concrete boat ramp next to Aquamoves and at the hill on the western side of the lake. When using the larger soft plastics it pays to cut off a bit of the head to ensure that your hook comes out of the plastic closer to the back as most of the trout have been nipping at the tails of the plastics. Redfin have been getting caught later in the day while casting shallow diving hard bodies like Daiwa Double clutches, small soft plastics have also been catching redfin when rigged on a jighead with a small underspin blade. 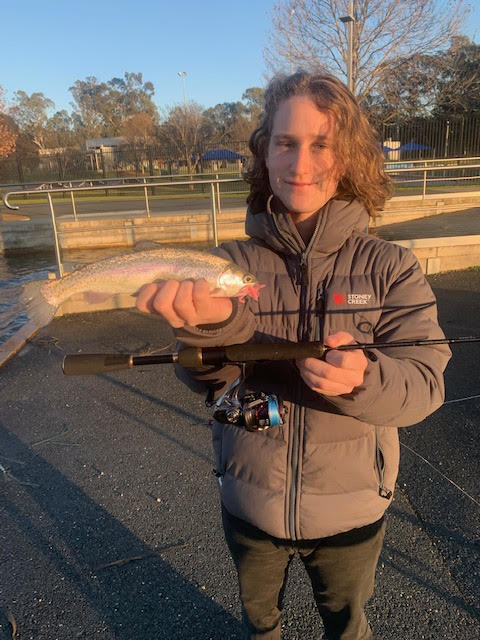 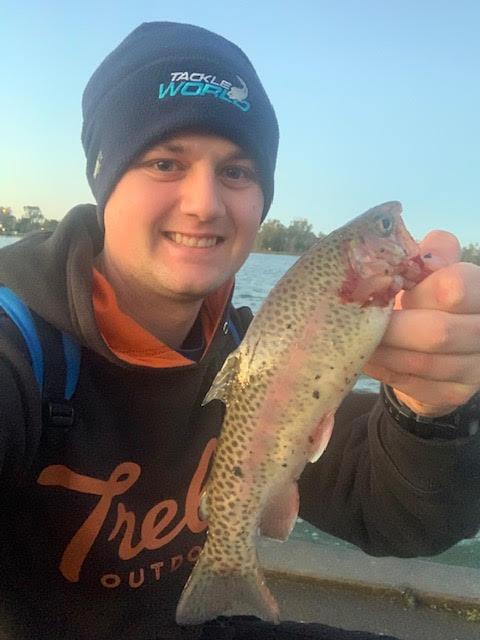 Waranga Basin is a bit slower now with the colder weather. Bait fishing for Redfin with really small yabbies has been getting the bites. While there are still a few getting caught on the troll it pays to search around for fish schooling and work on getting them feeding on bait. During the winter months we also see the odd big Trout or sometimes even Atlantic Salmon caught out of the Basin. It pays to add a Tassie devil to your trolling spread with a good distance of line out as they are usually spooked easily by the boat.
Eildon
Lake Eildon has been seeing some Great Cod caught with Swimbaits and large Plastics being the stand-outs as has been the trend for a while now. Gantias have been working good with the slimmer profile mimicking the smaller trout and other baitfish that most of the Cod have been feeding on. 8” Magdrafts have been the pick of the soft plastics for Eildon. Working your lures along the bank has been doing the damage but patience is key.

The Loddon river has quietened down over the last week. Anglers however that have been able to fish first or last light have put themselves in with a better chance. Using lures like the Jackall Pompadour or Gantia have seen some anglers rewarded. Anglers who have persisted with bait have done well on chicken and larger yabbies.

Reddies are still around in great numbers.  Local Angler Roger Dark was able to head out during the week and was rewarded with a great number of good sized redfin. These fish seem to be sitting a bit deeper in around 15-20ft. It’s worth trolling hard body lures such as the RMG in crazy deep. These lures are great for yellow belly and redfin. Once you find a school anchor up and cast lures into these schools. Lures that have been effective are Rapala Jigs, Storm Koika in 30 gram specifically in green colour or bouncing plastics in bright colours also is a great way to catch these fish.
If you're chasing cod or yellow belly, the rock walls are producing the occasional solid fish.

With the clearer water slowly coming through the Campaspe we are starting to get a few reports of some cod finally being caught. Majority of these fish are being caught on Bassman Spinnerbaits, however the Old Mate Lures are also very effective in this river with the 15ft being a great option. If bait fishing, Trellys scented chicken is also a great way to try to entice a cod on your line. Early mornings stick with the bigger lures such as the Bassman Crawler or a mumbler to help create that water displacement to entice the bigger cod to eat.

If you wish to catch some locally stocked trout on bait then Berkley Powerbait is the pick. Use a float or running sinker and you’ll be in with a good chance. Casting plastics such as the Strike Tiger Nymphs is also a great way to pick these trout up or casting Celta spinners with the colour of choice currently being gold.
Local angler Dylan was able to head out over the weekend and managed to land himself a nice rainbow trout on a Celta.

What a great report never seen this report before great