Up the top of Port Phillip Bay towards Altona has been fishing very well for Pinkie Snapper, although not really getting much over a kilo there is heaps out there! Casting 4” soft plastics or drifting with baits are very simple and effective techniques to score yourself a feed. Werribee has been on fire as of late with massive schools of King George Whiting patrolling the sand, anglers are having no issue in finding a bag of fish to 38cm. St Helens Rocks has been a bit slow this past week with the fishing being very hit and miss but with the wild weather we are having at the moment it is definitely worth a crack as it will stir all the bottom up and bring the fish in close, so we should expect to see some improvement this week, in particular the Snapper. St Leonards to Queenscliff still remains a popular hotspot if your chasing a feed of Calamari and Whiting, fishing the tide change for the whiting is the key to getting a bag of fish with sizes exceeding 40cm.

Once again this week its Tuna that are on most anglers minds and are dominating reports, all the way from the back of ‘The Rip” right through to Aires Inlet in anywhere between 20-60 metres of water and they are taking a wide variety of techniques with trolling and casting still being the most effective. Chris and Trelly went on board Gone Fishing Charters where they had a session to remember with heaps of Tuna hitting the deck whilst trolling lures, the boat even had an 8 way hook up twice and landed all 8 both times. Adam Van Der Lugt from Trellys got stuck into the local action landing himself some nice Tuna whilst casting Gulp 7” Jerkshads, finding the more turbulent water at the back of the heads was where they were feeding. 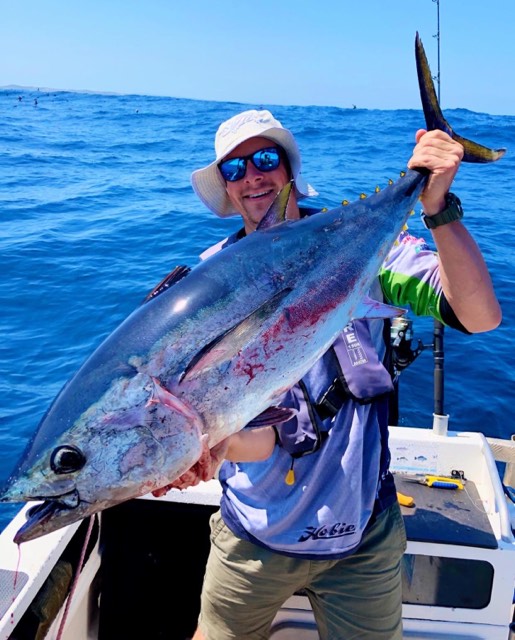 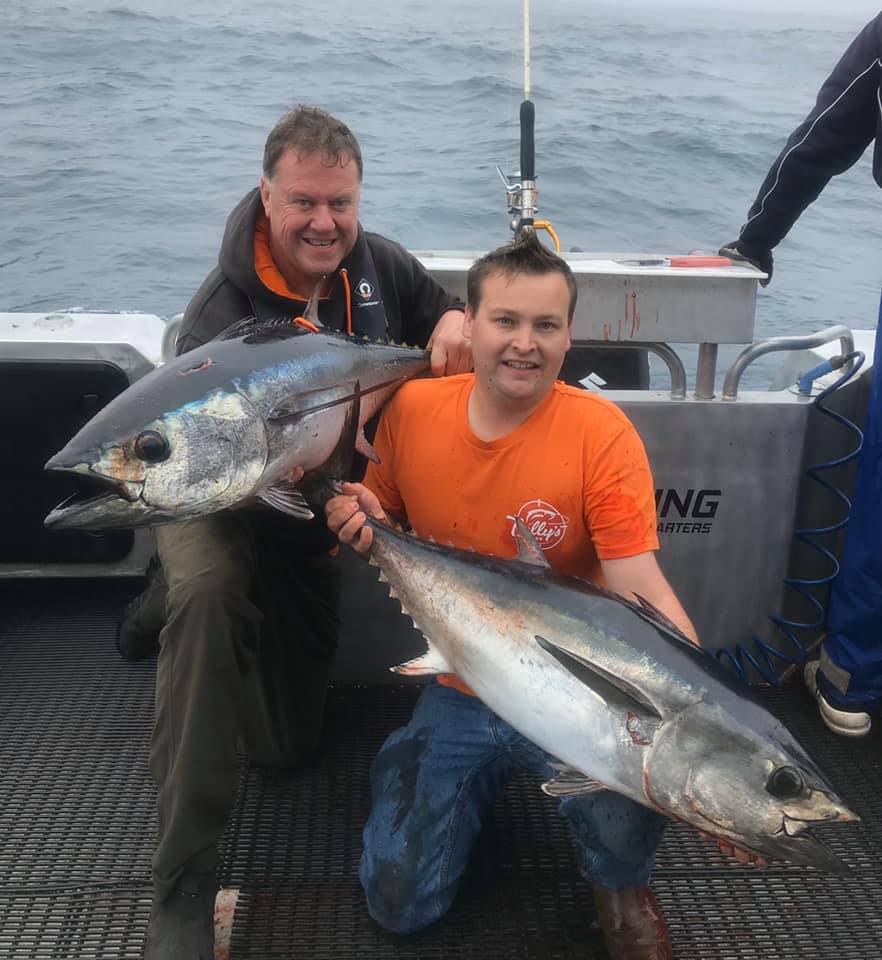 The Maribyrnong and YarraRiver are both fishing exceptionally well as of late for Black Bream holding hard against rock walls and bridges, casting small hardbody lures and soft plastics have been the go with Ecogear SX40s being a stand out. 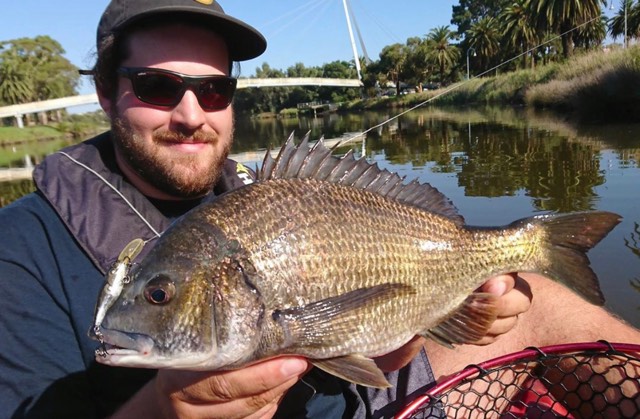 The Barwon River has been fishing very well as of late for Carp and with this rain it should only get better, Corn and Bread are the best baits and is a great fishing option if the weather isn’t in your favour.

The Goulburn River is high, dirty and flowing really hard around Seymour right through to Nagambie making it quite difficult to fish, but if you get in the little backwaters and creeks, there have been some Cod being caught, Surface Lures such as Jackall Pompadours and Molix Frogs are working well first light and late afternoon, and casting Bassman Spinnerbaits into the deeper parts. The Trellys crew, Justin and Karen, Jaclyn and James, kids included, have been very successful around Kirwans Bridge area, catching plenty of Cod between 45cm to 92cm and some good sized Yellowbelly amongst them as well. 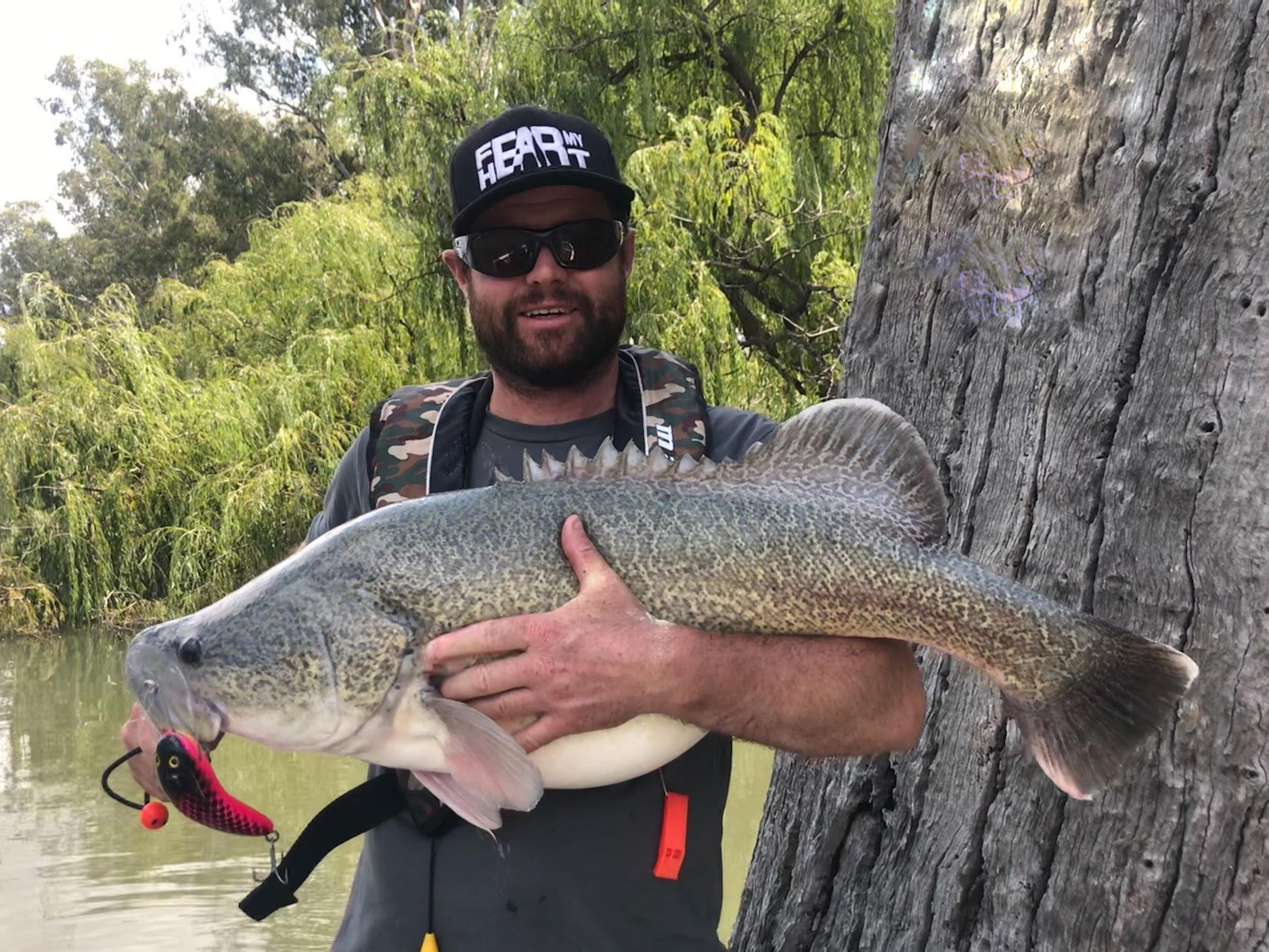 Casting lures has been hard, but Trolling Old Mate’s in both the standard size and the XXL size has been the standout method, even Paul and Bailey Thomas have jumped on the Trolling band Wagon getting a healthy 81cm Cod in the same area on a 120mm AC Invader, things are really looking good for Go Fish Nagambie.
Below the Weir is high, dirty, and flowing hard, still fishable right through Murchison, Arcadia, Toolamba, Shepparton and Undera, you will just have to hunt around for some slower patchers on the bends, and bait fishing will probably be a good option.

The Main Eastern Channel in the Kialla region is fishing great, spend a little bit of time to find some structure, Bridges, Drop Bars, Trees eg and you should get a Cod and a good chance of some nice sized Yellowbelly, we had a visit from Greg Mifsud, a Spinnerbait maker from Toowoomba, and we sent him out to The Main Eastern, he had a great time getting plenty of Cod and a Yellowbelly on his smaller profile (Redfin Size) Spinnerbaits on light line. 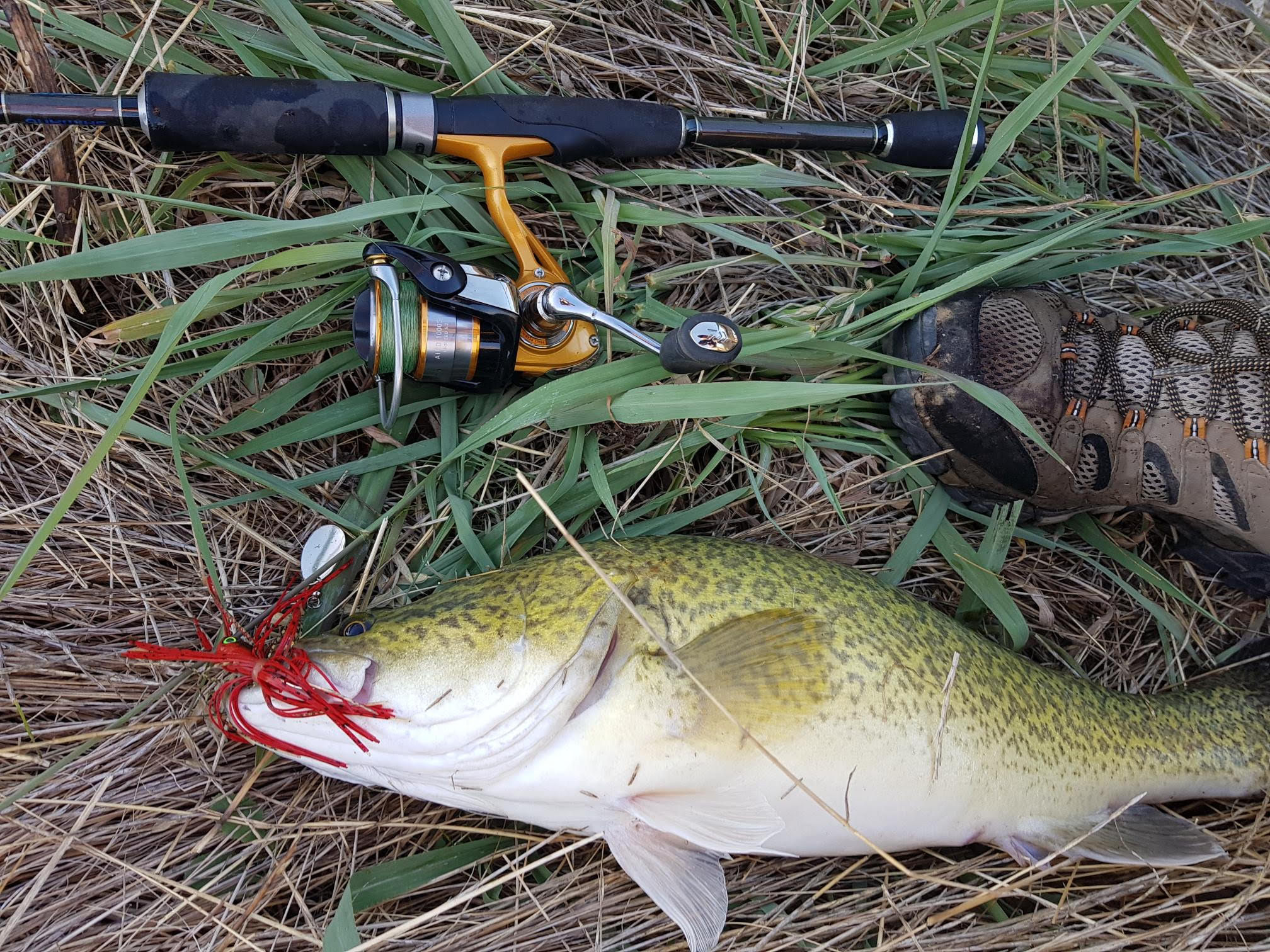 He also reported getting smashed in the Broken Creek near Nathalia, his 15lb line was no match!

Waranga basin has been fishing alright with plenty of good sized Redfin getting caught trolling and some good Yellowbelly getting caught as well.
Shepparton staff member Nelson and Fiance Jayme put in a quick session on Sunday and managed to get a nice Yellowbelly and a 35cm Redfin. 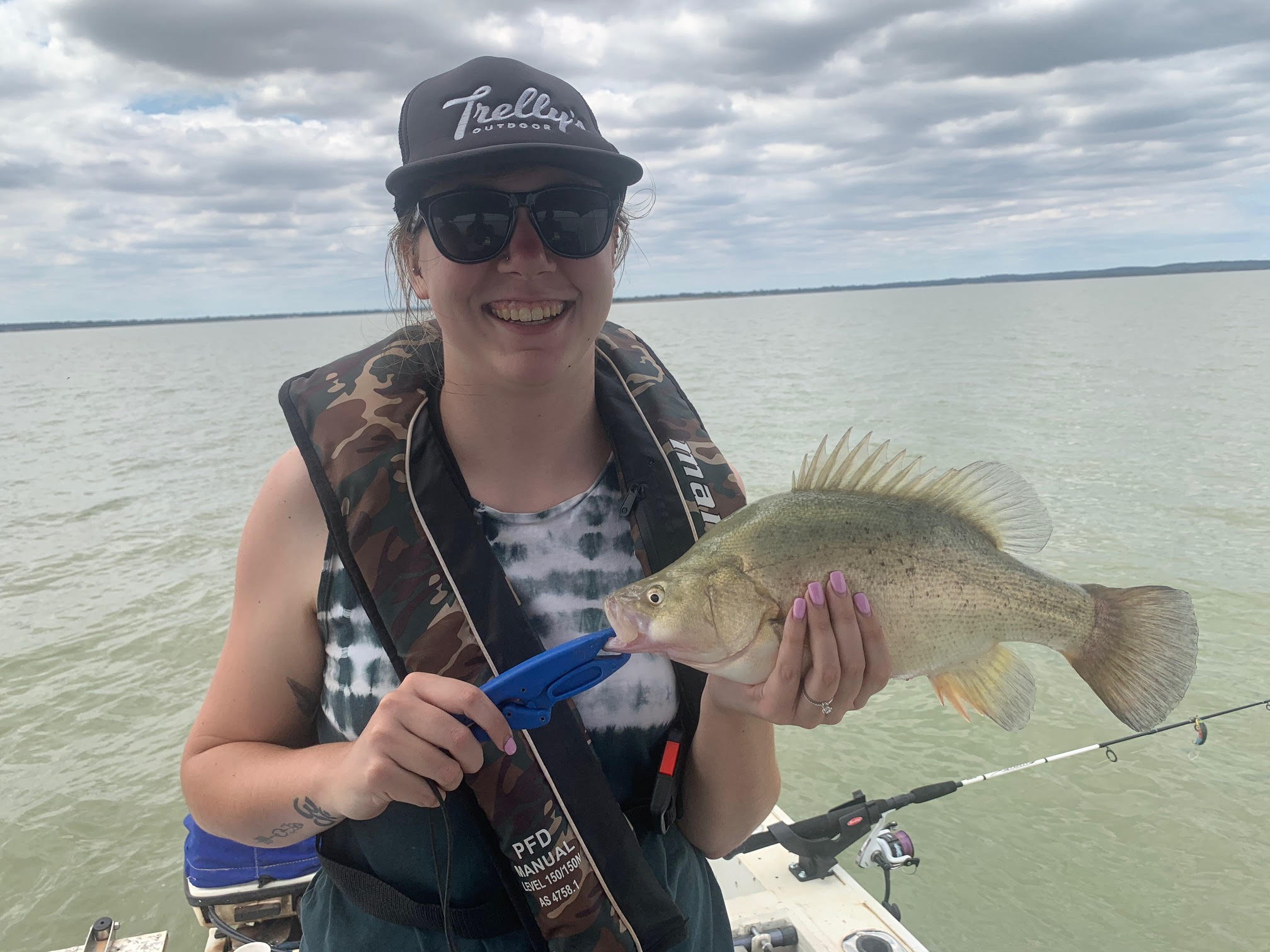 They were trolling across from Harrimans point to the boat club and found fish a couple kms out from the boat club in 6m of water. The Redfin was caught on a 3mt RMG Poltergeist in the Trellys Redfin colour, making sure to let out a heap of line to allow the lure to get down deep, using thin 20lb braid and light leader also helped with getting the lure into the target zone. The yellowbelly was taken on a 15ft Codger 55mm in colour 53, this lure has proven itself time and time again at the basin on both big redfin and Yellowbelly. Other reports out of the basin have all said similar things, fishing slow but good sized fish when they’re found. The main target areas have been harrimans point and out the front of the boat club, but don’t be afraid to go for a bit of a drive to find new ground. Any structure or little hole on the lake bottom is worth a go as most of them will hold fish at some point. Once you find an area which is holding fish hit it hard as the bite window has been fairly small so you need to take advantage of it while you can.