There seems to be one thing on fisherman’s minds at the moment and that is Tuna! Over the past week we have had arguably the best run of Bluefin Tuna our local waters have seen and it could only be just the beginning. Trolling and Casting have been by far the most popular methods to target them, Ethan Solly has had some great success on the local Tuna trolling small skirted lures with a “Lumo” colour being the standout. 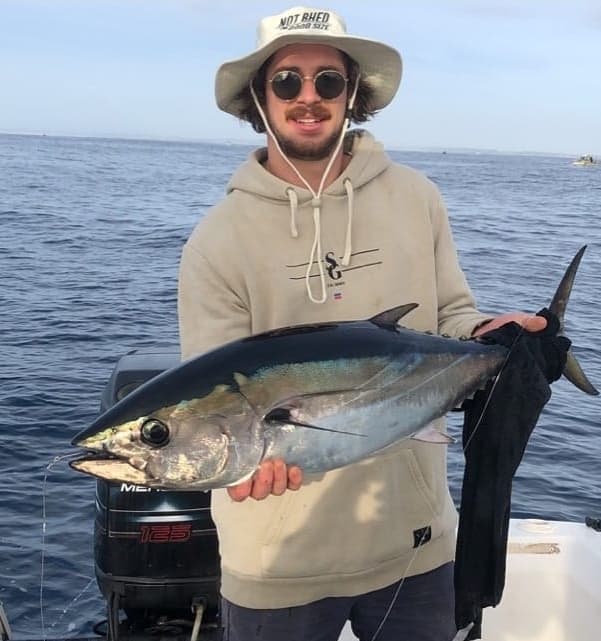 Casting stickbaits and poppers has been accounting for a large percentage of fish too and is definitely the most exciting way to target them watching them smash your lures off the top, it’s even getting to the point that anglers are taking the hooks of their lures due to catching too many fish but still want to get the thrill of seeing the fish chase the lures! Owen Westwell managed to snag himself a nice Bluefin first thing Monday morning whilst Micro Jigging which can be very effective if the fish are holding a bit deeper. 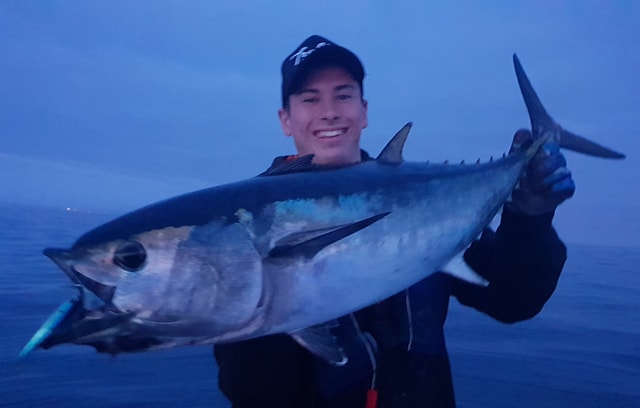 Although the Tuna are dominating reports this week there is still plenty of other fish to catch including Kingfish, there is still great numbers around Charlemont Reef in 25m of water. Drifting baits has been accounting for a lot of fish and if you’re into your lures, casting stickbaits, poppers and Micro jigging has been getting its fair share too. 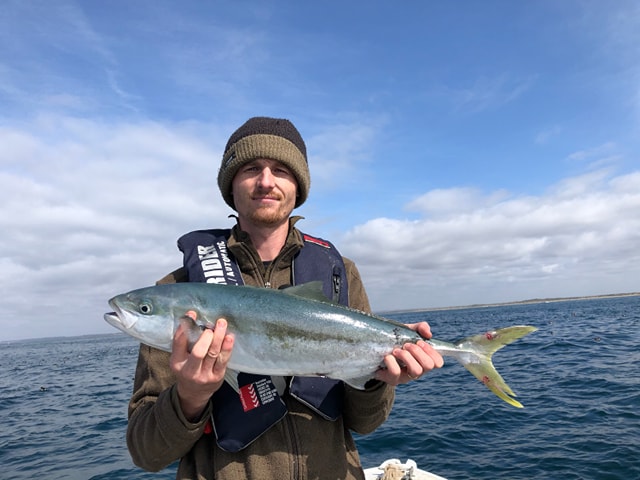 Josiah and his son Judah Munday got out Sunday morning and crossed paths with plenty of Yellowtail Kingfish whilst trolling small white occy skirts, the pair also managed some nice Bluefin Tuna. 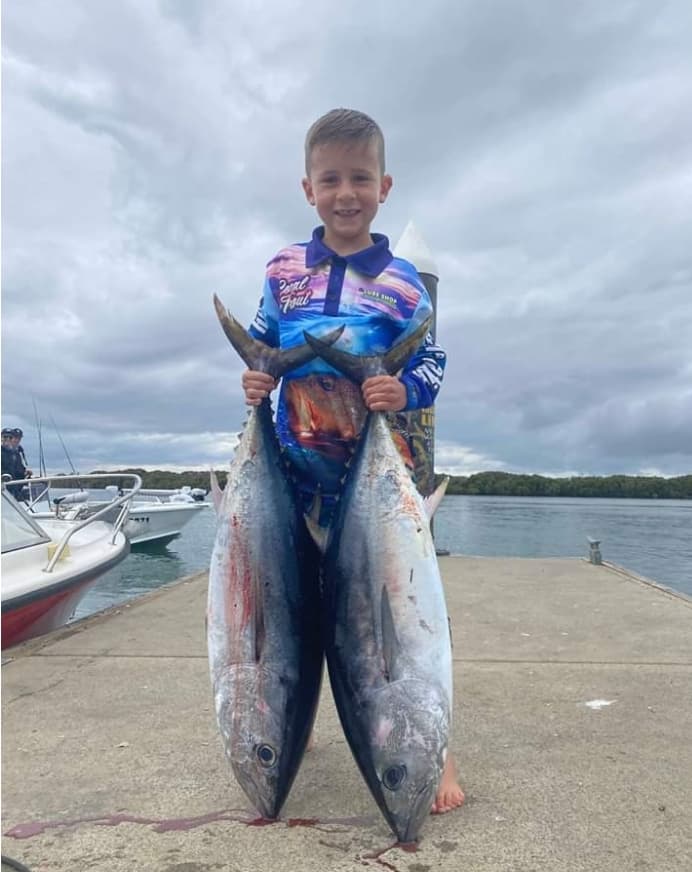 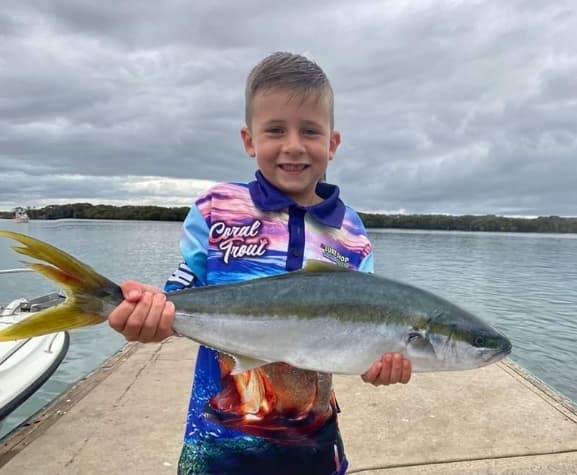 Inside Port Phillip Bay there is still some great fishing on offer with plenty of Pinkie Snapper still on the chew, reports of fish from around the mussel farms and also the inner harbour too. Squid and Whiting still remain to be biting along the peninsula, Fishing a tide change is key to getting yourself a bag of Whiting and for the Squid the incoming tide is best allowing the cleaner water to let the Squid hunt and see your jig easier. St Leonards Pier has been producing plenty of Squid for the land based fishos with night time producing the better numbers and size

The Otway Streams have been fishing quite well for Brown Trout over the last week, The Cumberland River and Smythes Creek are well worth a look. Casting small shallow diving hardbodies, soft plastics and Fly fishing are all producing fish.

The River near Trawool is fishing quite well, nice and clear, making lure fishing very productive, trolling 3 to 4 metre divers has been good for Cod between 50 to 65cm. A few trout on Pink Tassie Devils, either colour 55 or the Trellys custom pink. Some nice sized Redfin in the same area mainly on Worms. Closer to Seymour and Goulburn Park area has been the best, Chicken and Cheese working well for Cod and Trout and Redfin on Celta style Spinners and Tassie Devils.
Nagambie is really starting to fire up, most Fisho’s coming across a Cod or 2, some in the Metre range, but most are between 50 to 65cm, trolling 25ft Old Mates from Chinamans Bridge to Mitchellstown Bridge a good place to try, casting either Surface Lures or Spinnerbaits into the little lagoons like Sandy Creek around the Lily Pads. Pro Staffer Nelson and Fiance Jayme fished near the 2 Wineries and caught plenty of smaller Cod between 40cm and 55cm and a couple small Yellowbelly on Chicken and Bardi Grubs. Bobbing Gulp 3 inch Grubs in black around the Trees along the bank has accounted for some nice Yellowbelly and the occasional Redfin, either sound up some schools around the Trees, or move frequently until you find them. You’re always in with a chance of a Redfin, Yellowbelly or even a Cod around the Boardwalk in the main Lake in Town, Worms and small Yabbies doing the trick.
Below the Weir is great, Murchison East to Arcadia, Toolamba, Bunbartha to Undera are all fishing really well, the River is reasonably clear, nice height and isn’t flowing too quick. Casting Bassman 4x4’s in colours 52, 18, 7 , and 19 are working well for mainly Cod, quite a few fish around 62 to 68cm and plenty of smaller models, also mixed in are some Yellowbelly around 38cm, a little tip is to find the freshly fallen trees that still have green leaves on them, these trees are holding big numbers of Shrimp, the bigger Cod are underneath and the Yellowbelly seem to be just off the ends mid water. Pro Staffer Shane, his daughter Payton (pic), mate Jacko and his daughter Leah fished near Arcadia, catching plenty of small to medium Cod on Cheese, but Chicken, Scrubworms was the standout and first light and late afternoon to dark was the best time, the middle of the day was hard work 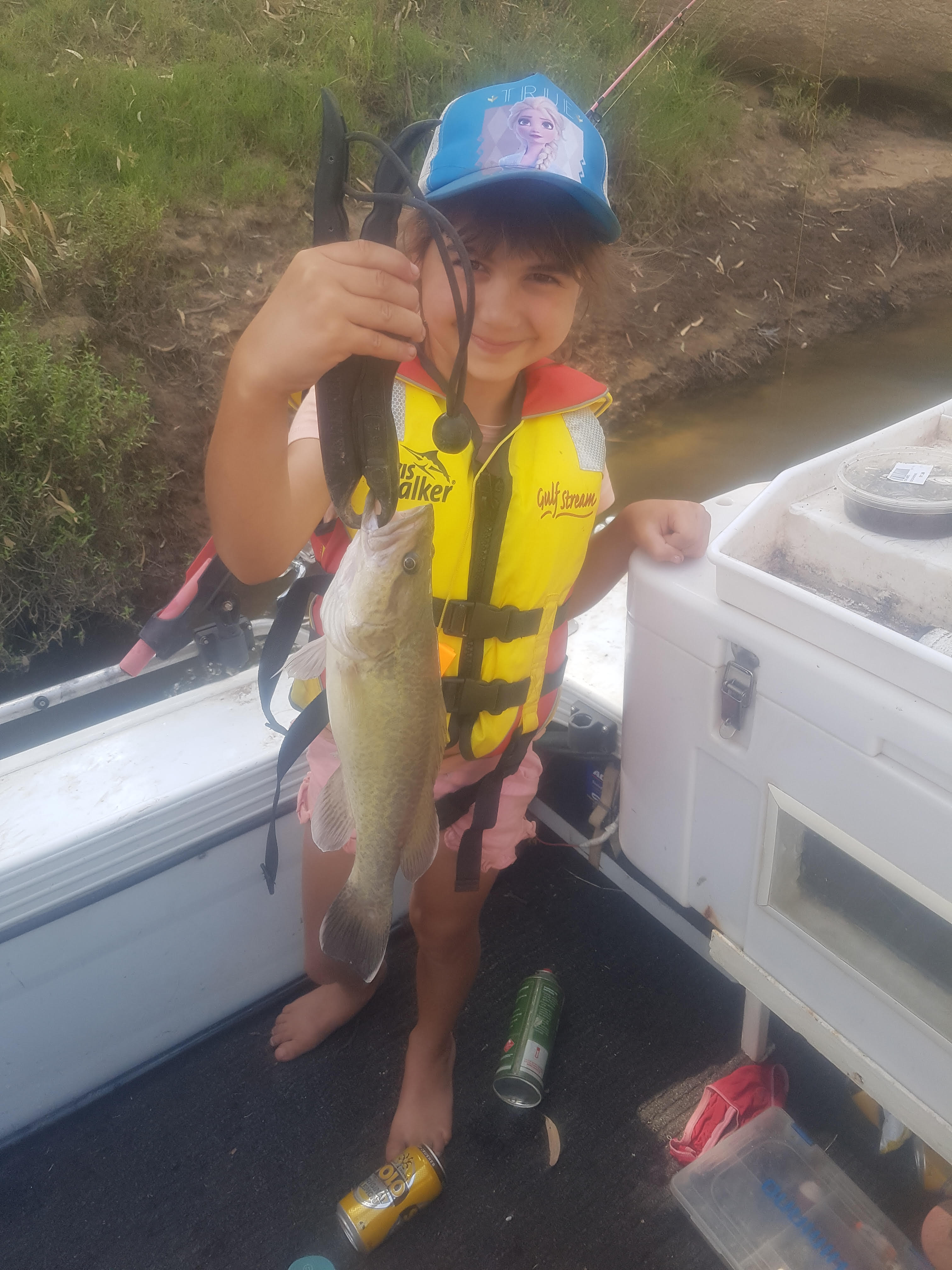 The Irrigation channels around Tatura to Kyabram are fishing ok, not great but worth a shot if your chasing a feed of Redfin, focus on the main channels and the drop bars, the channels aren’t flowing much, I guess no one is using water with the current price, so hunt around for some nice flowing water, Worms and small Yabbies the best.
The Main Eastern Channel is the standout as far as a channel goes, plenty of good sized Cod and down towards Wahring Station, there are some Redfin and Yellowbelly mixed in with the Cod, Bait fishing with Cheese Chicken, Yabbies and Scrubworms working well, but small Hardbodies such as RMG Poltergeist 50’s and Bassman Yellowman Series Spinnerbaits working really well.
Waranga Basin has been fishing ok with some small Redfin being caught while trolling small hardbodies like 55mm codgers and 50mm rmg poltergeists. Bait has also been going ok with small yabbies and worms doing the trick once a school has been located. Another method to try has been casting soft plastics around some of the submerged logs with some anglers finding heaps of little fish by using this method.

Lake Nillahcootie has been fishing well for redfin and probably one of the better lakes to give a shot if you’re after a good feed. We heard reports of great numbers of reddies caught bobbing worms and yabbies around the trees with plenty of fish being caught up to 35cm.

Mulwala has been hit and miss but there have still been some great fish for those who put in the hours. Paul Thomas hit up the lake over the long weekend and landed some nice fish including this healthy Cod while casting the Trellys Exclusive Jackall Gantarel Black Mamba. 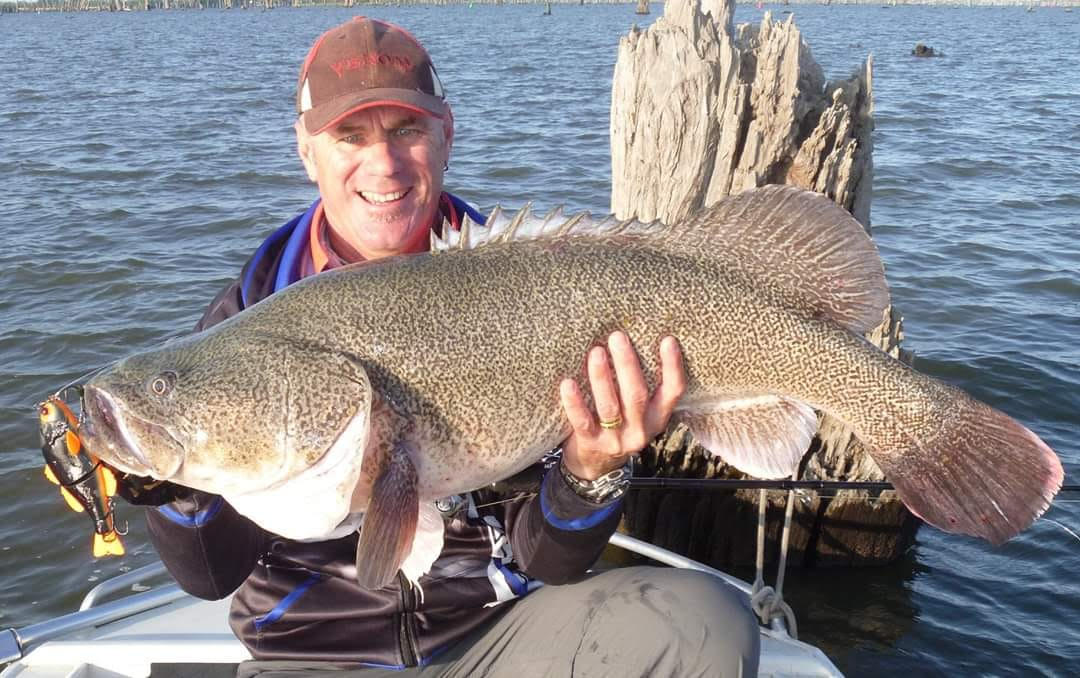 The Murray around Yarrawonga has been fishing well with some big cod getting caught on both bait and lures. We had a couple in during the week who’ve been smashing Cod recently below the weir. Rohan and Angela have had a great start to the year, already landing a few fish over the metre mark on both lures and bait. Angela landed this 98.5cm fish below the weir on bait, Rohan broke the metre mark last Tuesday with this 1.05m fish caught off the top. 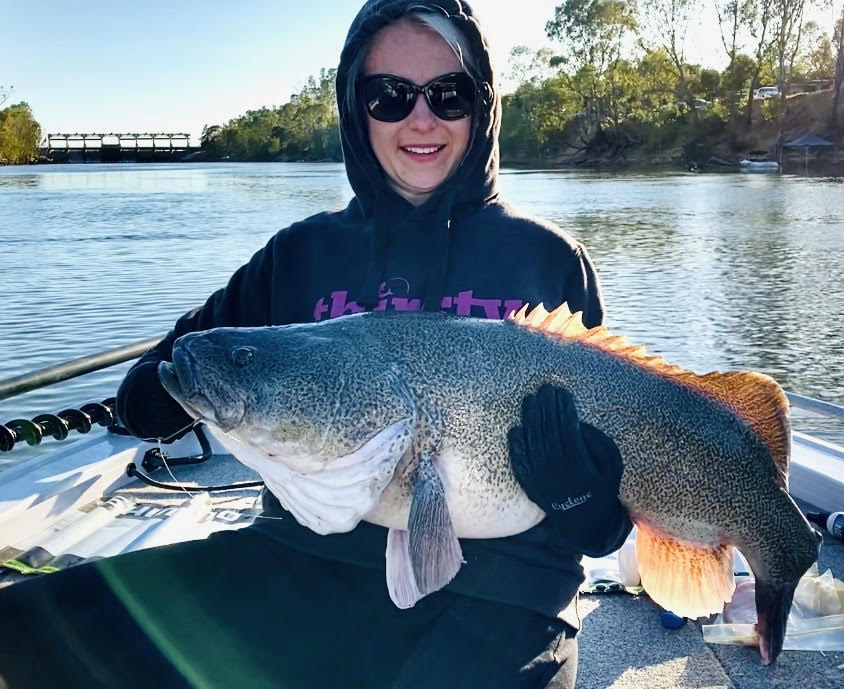 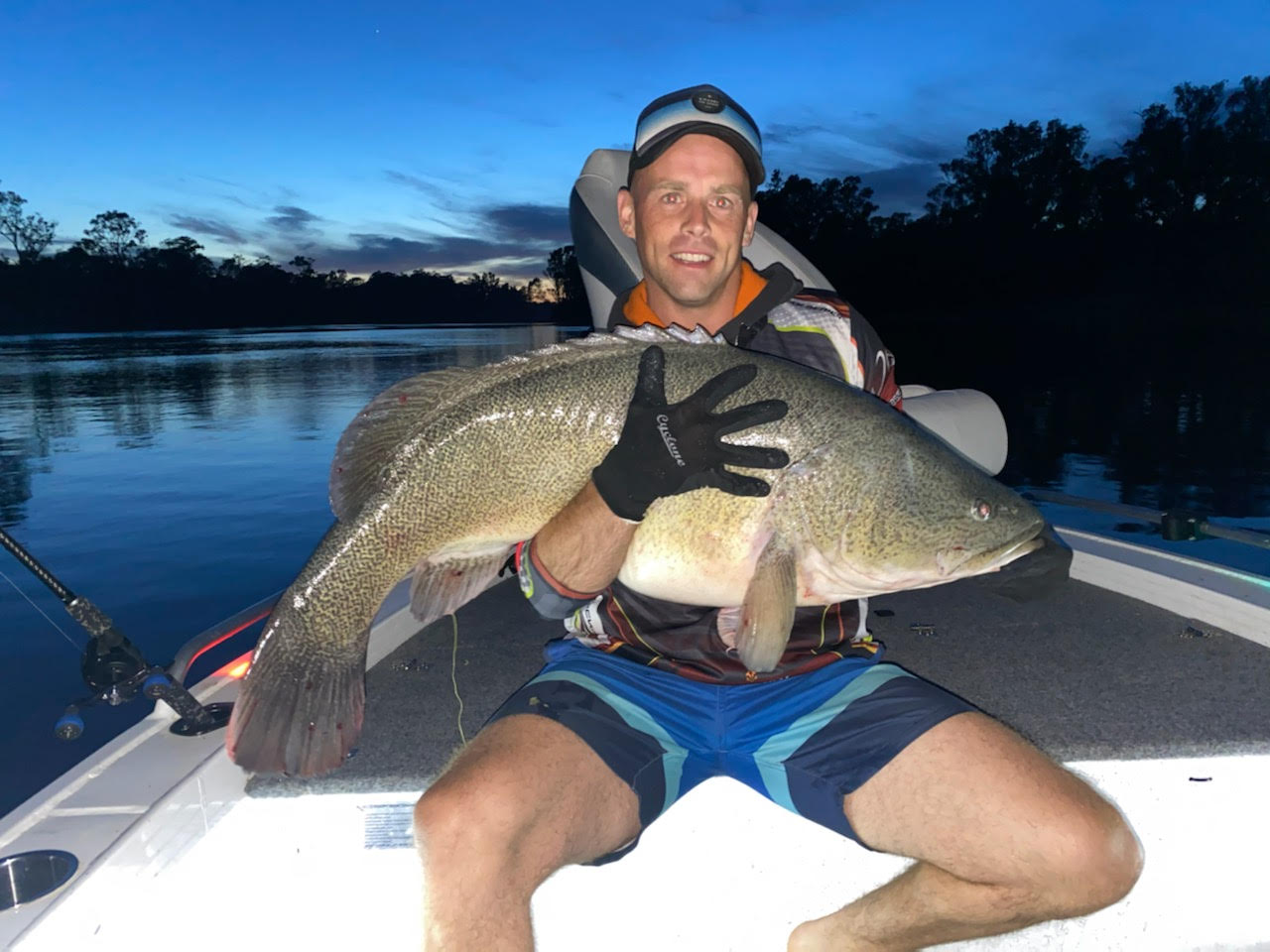 Further downstream towards Beari we’ve heard of good numbers of fish getting caught on both bait and lures. If playing the numbers game bait is your friend with Bardi grubs and chicken being the bait of choice. There have also been a few bigger fish caught while trolling size 1 stumpys around the Beari Barmah area. Further downstream around Echucathere was of a 1.10m caught on a big yabby off of a houseboat.