What a way to kick off the New Year, the local fishing at the moment has been fantastic with just about all your favourite species on the chew. Gummy Shark and Snapper remain to hold in good numbers all over Clifton Springs with the Snapper getting to around that 4kg mark, bait still remains to be the most popular method of targeting them although they are more than willing to snatch up a soft plastic too. Gulp Turtleback worms are a great lure to throw and will catch a wide variety of species including Flathead, Pike, Salmon and Whiting. 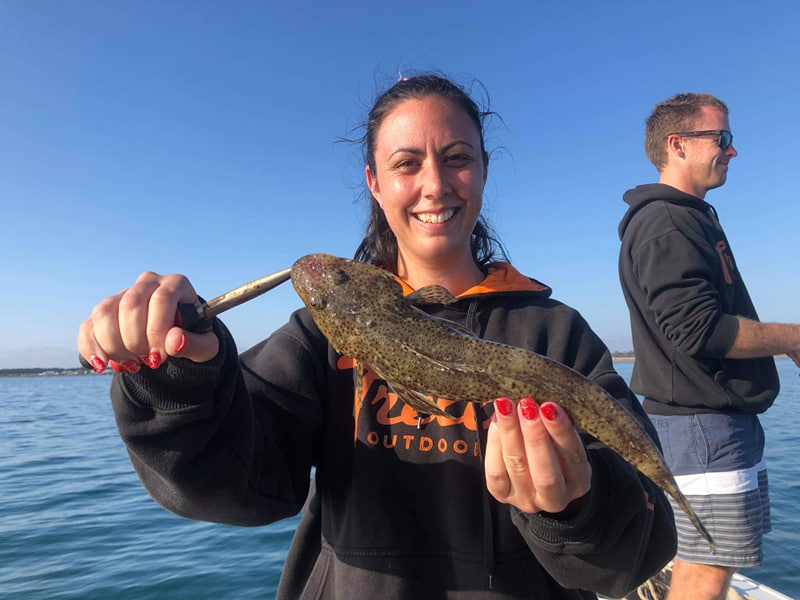 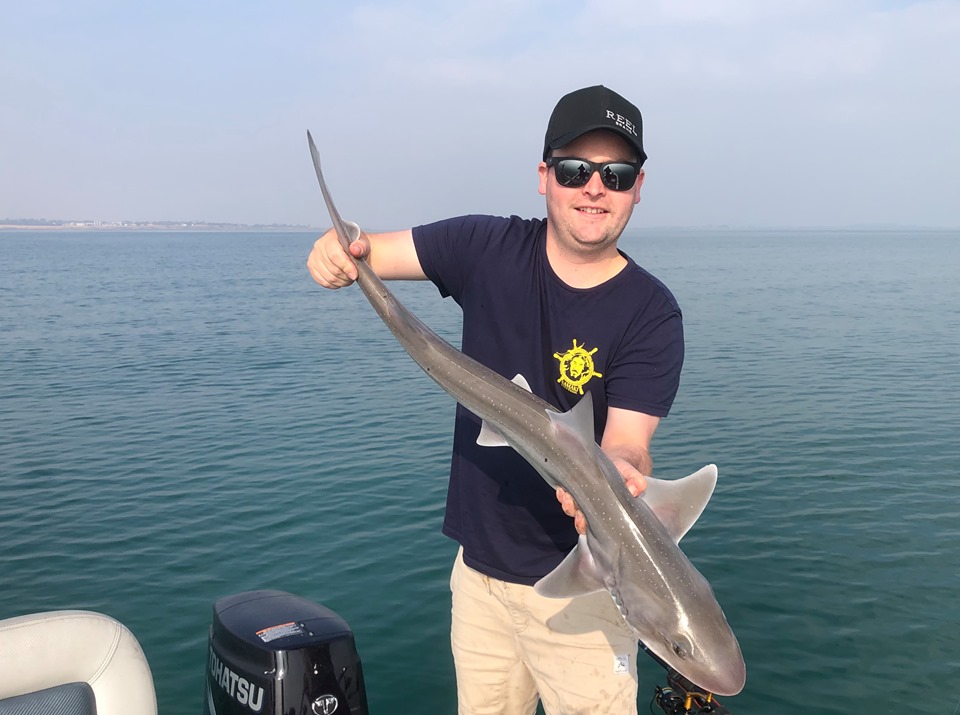 Around the corner towards St Leonards has had some great reports come through of both Whiting and Calamari, the Calamari have been a little hit and miss due to the discoloured water but if you can find the cleaner water it should better your results. The Whiting have been biting from straight out the boat ramp right down to Swan bay and even through to Queenscliff, fishing a tide change has been key to getting the better sessions. Queenscliff Harbour has been producing a nice variety of fish for the guys fishing land based with soft plastics finding Silver Trevally, salmon, Pinkies and Squid all on the chew at the slack of the high tide. 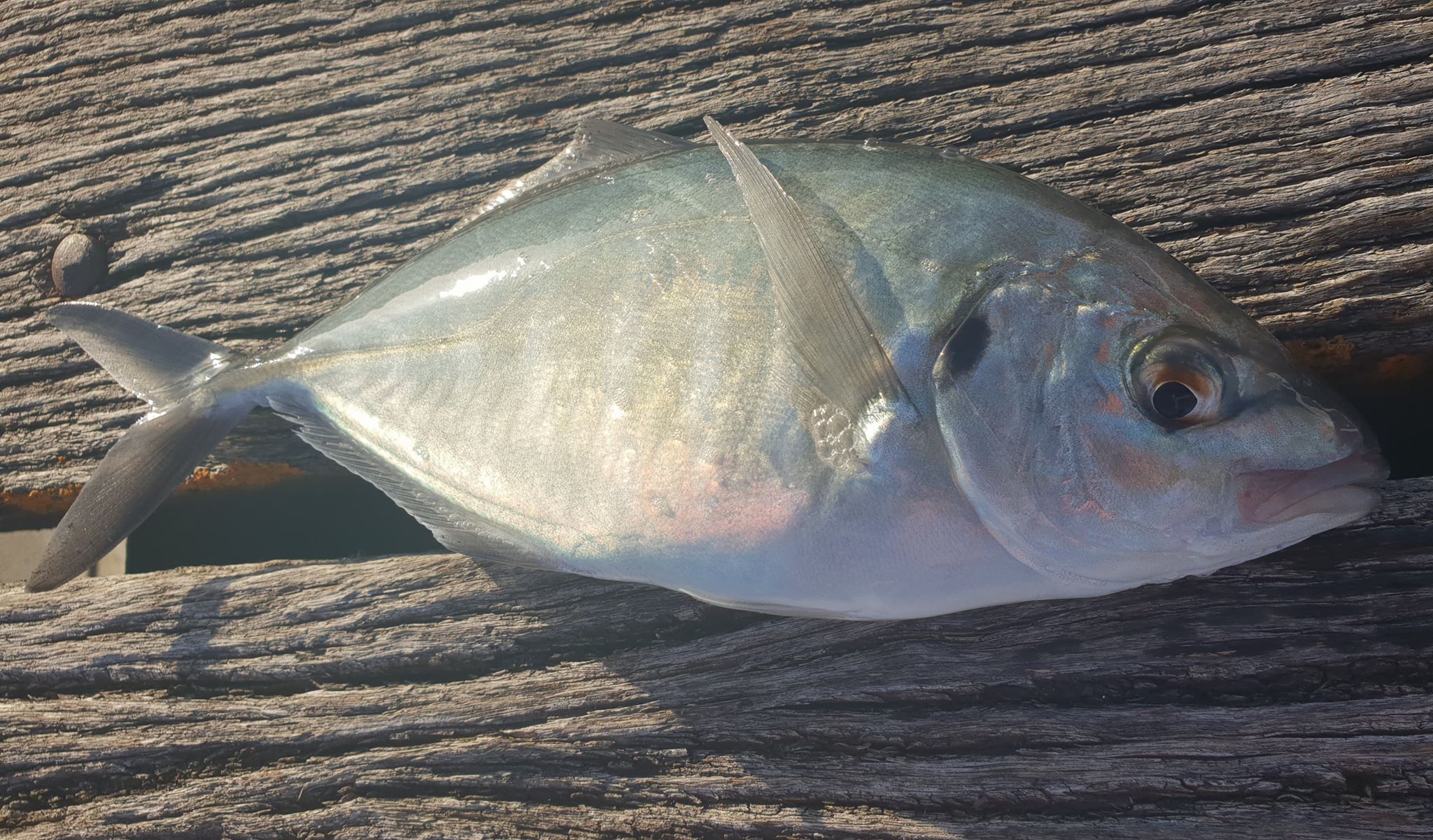 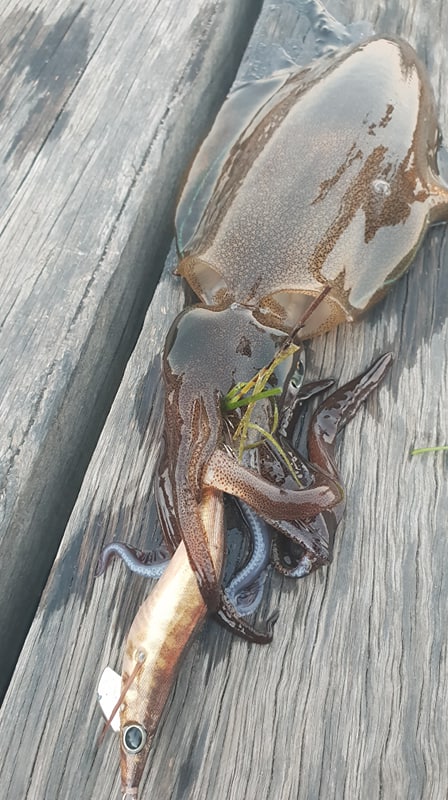 Offshore Barwon Heads has been a real hotspot over the past week, Gummy sharks have been in great numbers and are at a great size with the average fish around 12kg. Fresh baits such as Salmon, Squid and Wrasse have been getting majority of the bites. On the topic offresh baits there has been Large Schools of Australian Salmon around terrorizing baitfish and they are BIG! Ethan Solly got out during the week with a mental session of nonstop rod bending. 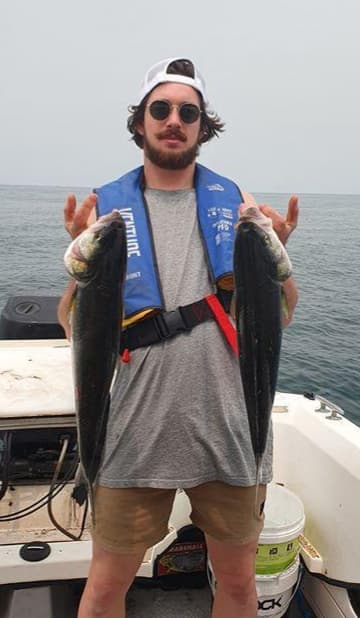 Yellowtail Kingfish reports are just starting to roll in at the moment with most of the fish being smaller rats around 60cm. Angus Illingworth managed to find himself some Kings over the weekend as well as getting bitten of by a big Mako Shark. 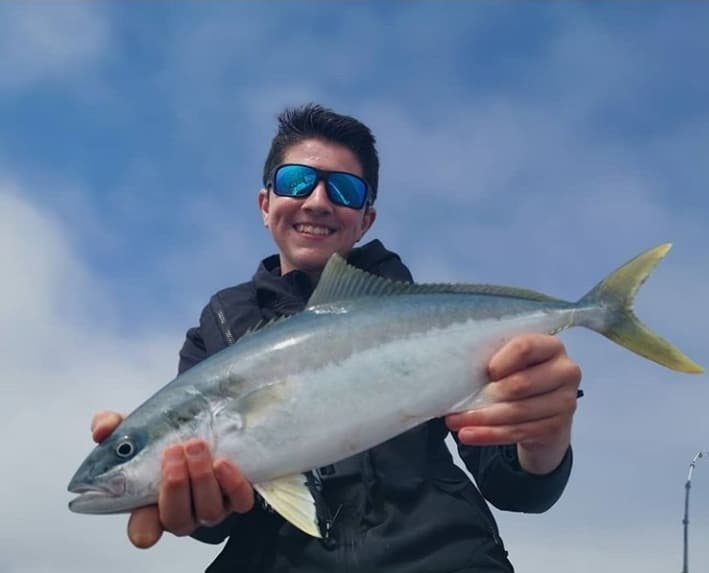 Down the West Coast has seen the summer Tuna run kick into gear with most of the reports between Portland and Port Fairy, Most boats are trawling them up however casting stickbaits and poppers can be a very effective and fun way to target them. Maxx Obic, Ante and Stipe Peric got down to Port Fairy over the weekend managed to boat some quality Tuna. There are also some Kingfish getting caught in close to Portland Harbour with some fishing getting over 10kg. 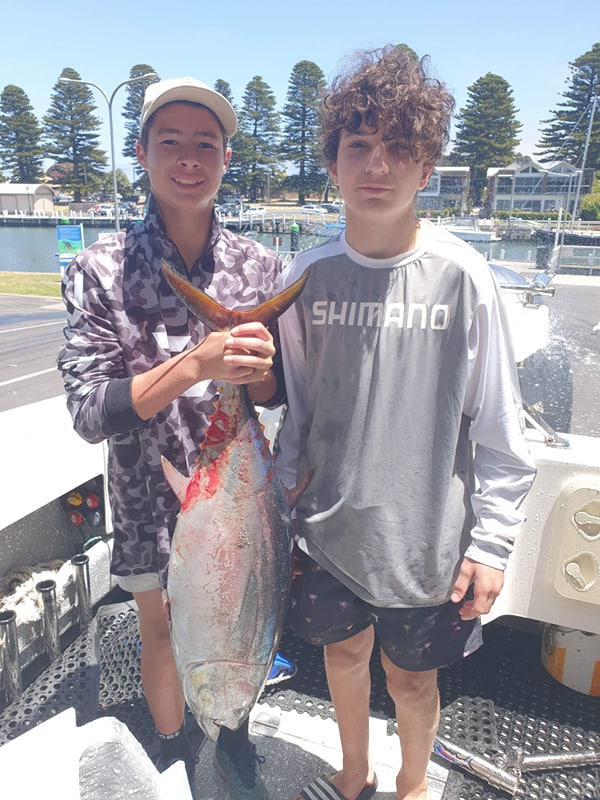 Things have really started to pick up over the past couple of weeks, the Goulburn is starting to rise again and is fishing really well. Seymour area, mainly around Northwood Road has had plenty of good sized Cod being caught, bait fishing is the standout with Cheese, Chicken and Scrubworms working well. A few Cod have been caught off the surface on Jackall Pompadours. Nagambie has fished quite well also with Yellowbelly, Redfin and Cod in the main lake, and in the River towards the Wineries. One report was 2 Cod off the surface on Codger Surface lures right in the middle of the Lake. The Yellowbelly and Redfin seem top be around the Boardwalk and Soft Plastics working well. The Cod upstream are taking big Hardbodies such as Size 1 Stumpjumpers, White Crows and Coddogs. Jackall Chibitarel’s and Gantia’s are working well for Cod around Kirwans Bridge, try the shallower water in the Mornings and Late Arvo’s, even try some surface lures, then move into the deeper parts as the Sun comes up, sometimes the Cod are hiding deep with the warmer weather/water, maybe try some Spinnerbaits when their deep. Some Redfin and Yellowbelly around the Willow Trees and Stumps, bobbing Soft Plastics and small Yabbies or Shrimp the best method, either sound up the schools of fish or move every 20 mins or so, until you find the fish.
Below the Weir is fishing awesome, plenty of Yellowbelly, mainly on small Yabbies, and some good sized Cod on Old Mate and Codger Divers, Bassman and Pirate Spinnerbaits, and off coarse the surface action has been great, Bassman Aussie Crawlers, Codger Surface Lures and Jackall Pompadours all working well, if your after the bigger fish, the Bassman Crawler is the way to go, with the bigger profile, it seems to be consistantly catching bigger fish. We have heard of over 10 Metre plus Cod caught between Toolamba and Mooroopna over the last couple of weeks on a Mixture of Baits such as Cheese, Chicken, and all styles of Lures. The hot spot seems to be Toolamba to Arcadia.

A few Redfin are starting to show their face at Waranga Basin when the wind allows you to fish it, still not getting 200 fish a session, but a good feed is a good chance. The best reports we’ve had have been from people getting out there early and finding a decent school to get stuck into before the ski boats start making an appearance. We’ve had a few people getting onto some in around 3m near the boat club and off of Harrimans point has also been fishing well. Trolling 3mtr rmg Poltergeists have been the go in these shallower areas as well as 10ft codgers in the smaller 55mm size. Shepparton regular Mario had a good session at the Basin Christmas eve getting a nice feed for the family for Christmas day. 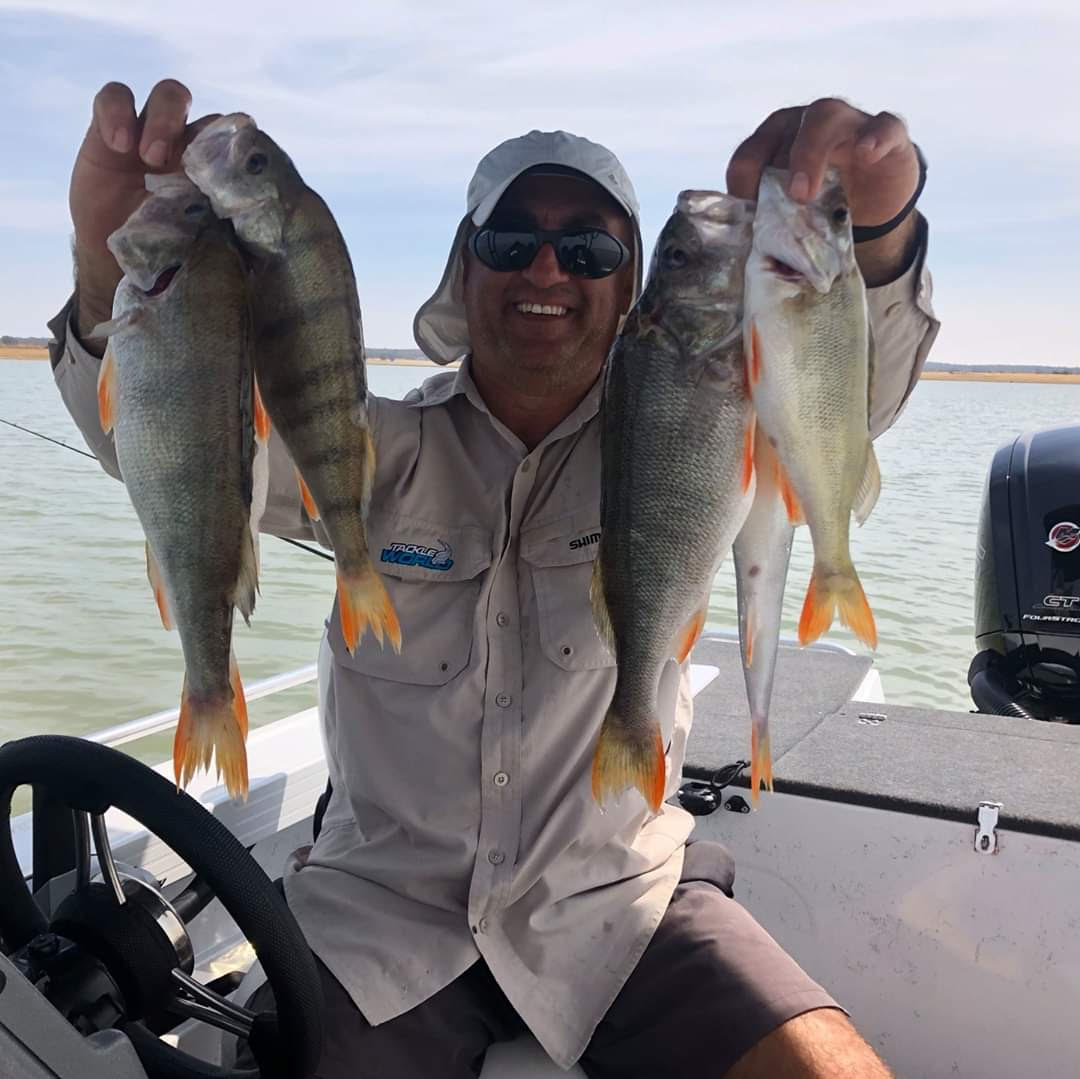 The irrigation channels in the area are fishing well, some good Redfin on T/N 60 Jackalls and baits such as Worms and small Yabbies, the main spots to try are the Western Side of Waranga Basin towards Tatura or Kyabram.
The Main Eastern channel has been to Go To, to get your first Cod, or just want to get on the board, if you spend the time anywhere from behind Wahring Station to Invergorden, and try baits such as Cheese, Chicken, Scrubworms and big Yabbies or walk the banks Spinnerbaits should result in some nice fish, we sent a young fella and his mum out their last week and he got his first, a 79cm model and his second a 57cm, both on cheese, and in the Kialla Central area.

Plenty of good sized Cod around Bearii through Cobram to below Yarrawonga, Baits such as Cheese and Chicken are the standout, but the Lure Fisho’s are having some fun on both Surface action and Spinnerbaits. Jackall Gantias and Gantarels, Balista Tremors and Bassman Aussie Crawlers are having the most luck at Lake Mulwala accounting for good numbers of Metre Plus Cod, Kiffins to the Evergaldes to best spots to start.

Lake Mulwala is fishing well with cod of all sizes falling to both bait and Lures.
Shepparton regular Mick Beale (pic) has been smashing the big girls with the new King of the Knight Gantia that he picked up from us before his last trip. Mick was fishing with his young bloke who got a mid sized cod on the Gantia. After his son had got onto some Mick had a go and scored himself a 105 and 122. 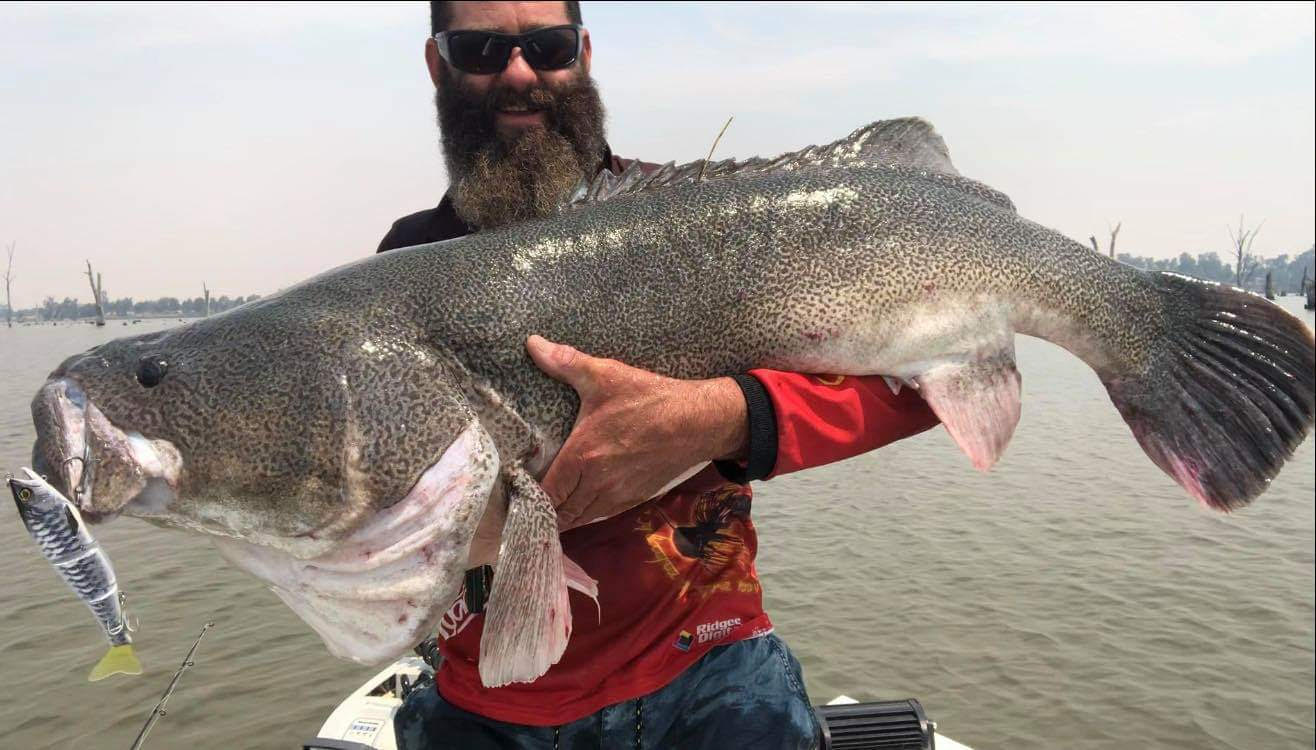 The Balista Tremor is still accounting for heaps of big Cod, James from Balista decided to put the Redfin colour through its paces and wasn’t disappointed with this ripper falling to it with the diving bib. James was fishing in the extensive backwaters of Mulwala to escape the wind last week. 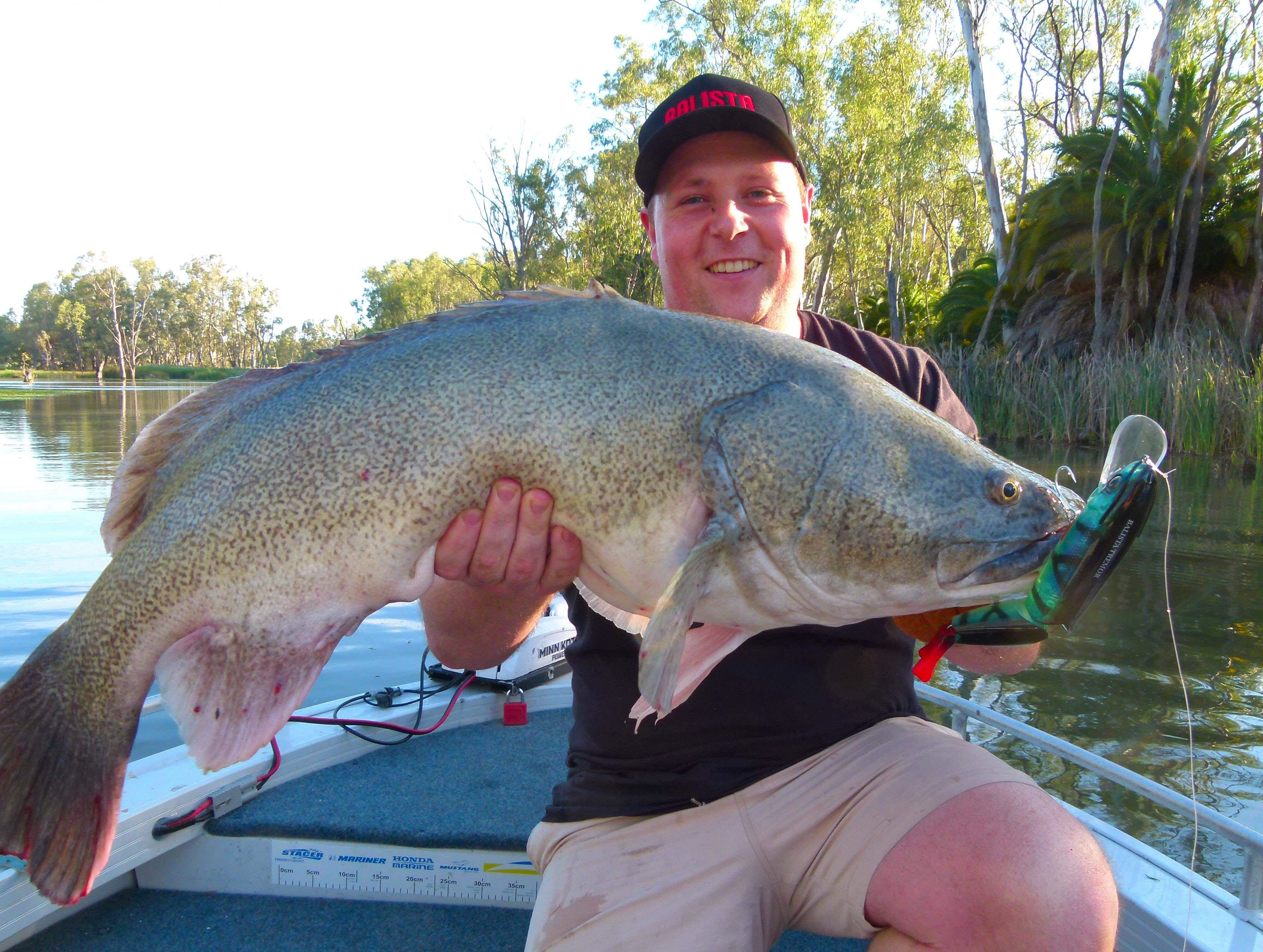