Corio Bay
After a week of windy conditions we are finally starting to see some better weather come in and plenty of reports from around the Bay. Starting in close around the Geelong Waterfront there has been some great fishing on offer, in particular the Rippleside jetty with good reports of big King George Whiting, Pinkie Snapper, Silver Trevally and even some Black Bream. Most fish are getting caught on bait however is a great spot to cast some soft plastics around. Owen Westwell snuck out during the week casting soft plastics around the waterfront structure finding himself plenty of Pinkie Snapper, Owen mentioned what they lacked in size they made up for in terrific numbers.

Out from Clifton Springs the Pinkies are still on the chew and still very willing to eat most soft plastics you throw in front of them, with that there are also heaps of Pike and Flathead in the same area. Brad Apps got out over the weekend boating himself a solid haul of Snapper along with some big Pike which make great bait. Bryce Nurnaitis, Noah Lever and Beau Allen also got out over the weekend with the trio managing themselves some pinkies and big Flathead too. There are also plenty of Whiting on the chew aswell in a bit closer off Clifton Springs, Fresh Squid or Pipis are still your best baits. 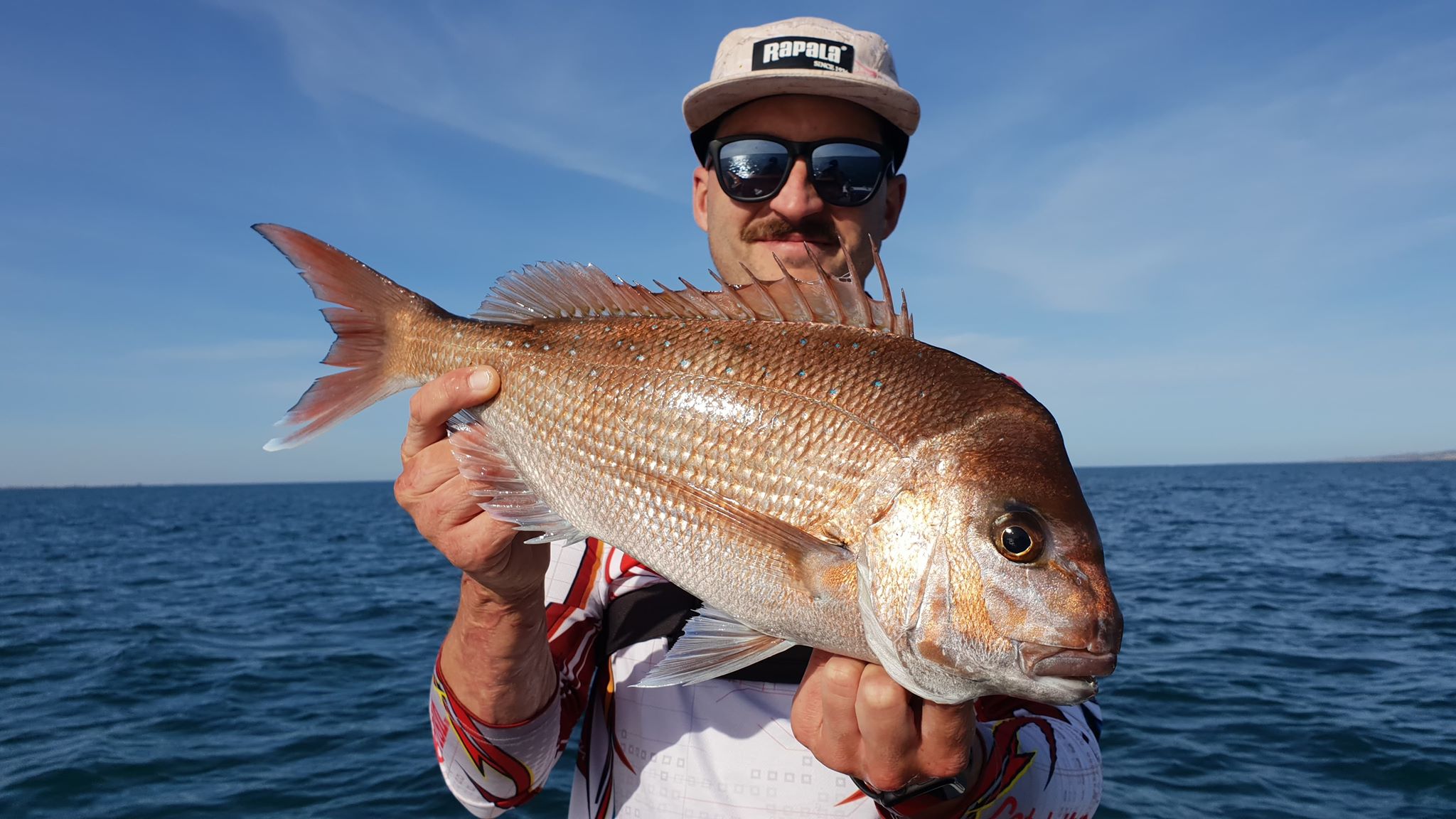 Brad Apps with a nice Pinky taken off Clifton Springs 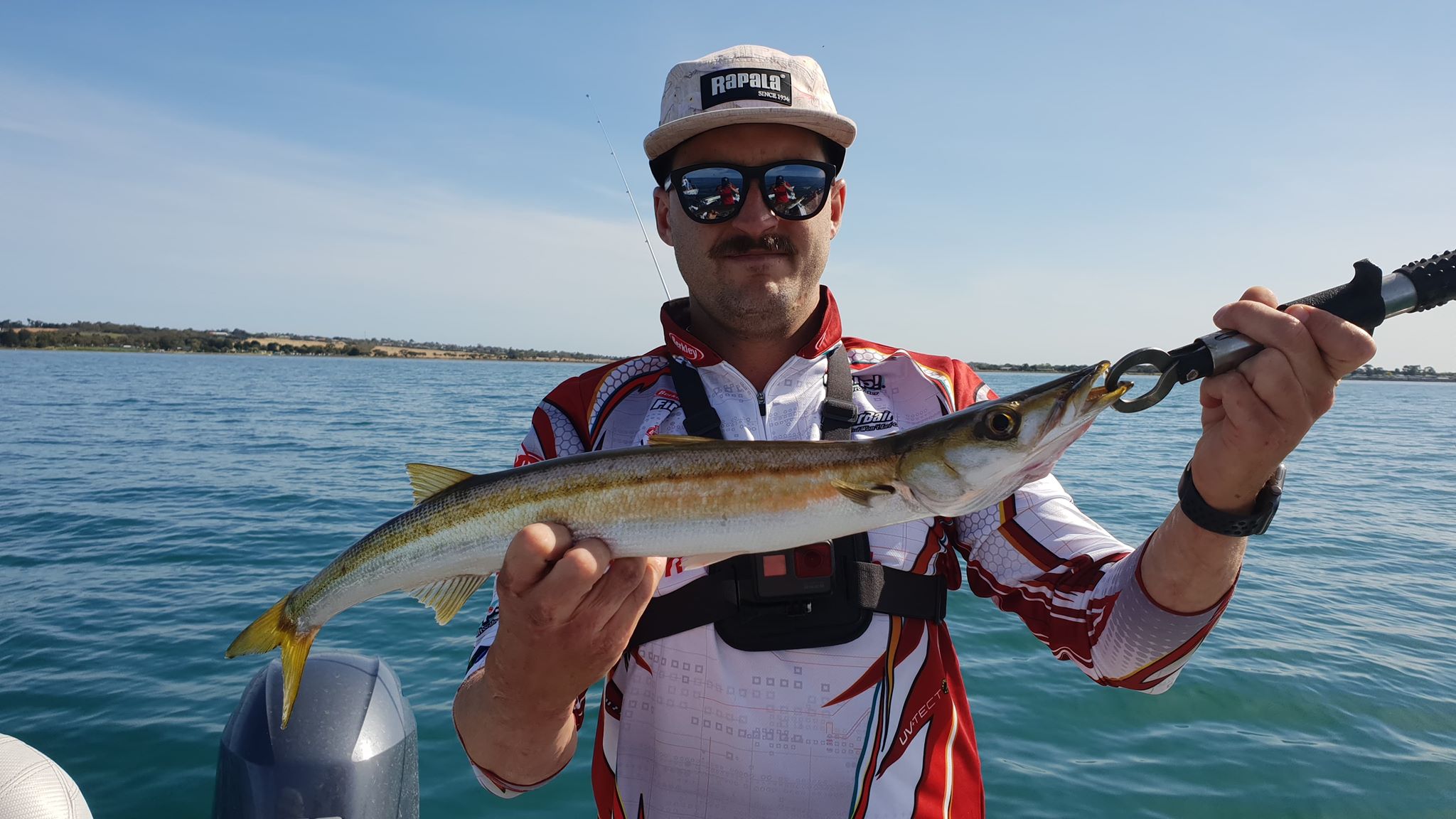 Few Pike thrown into the mix too 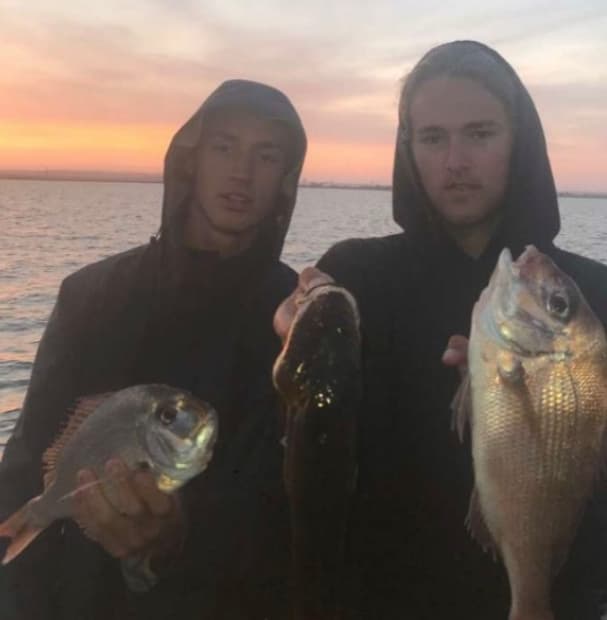 Bryce Nurnaitis and Noah Lever with some of their catch

Matt and Luka Lončarić from Trellys Geelong and Laverton ventured over to Carrum over the weekend in search of Snapper and the boys were not disappointed, the pair managed to get a bag of Snapper to 3kg with the standout bait being Silver Whiting. 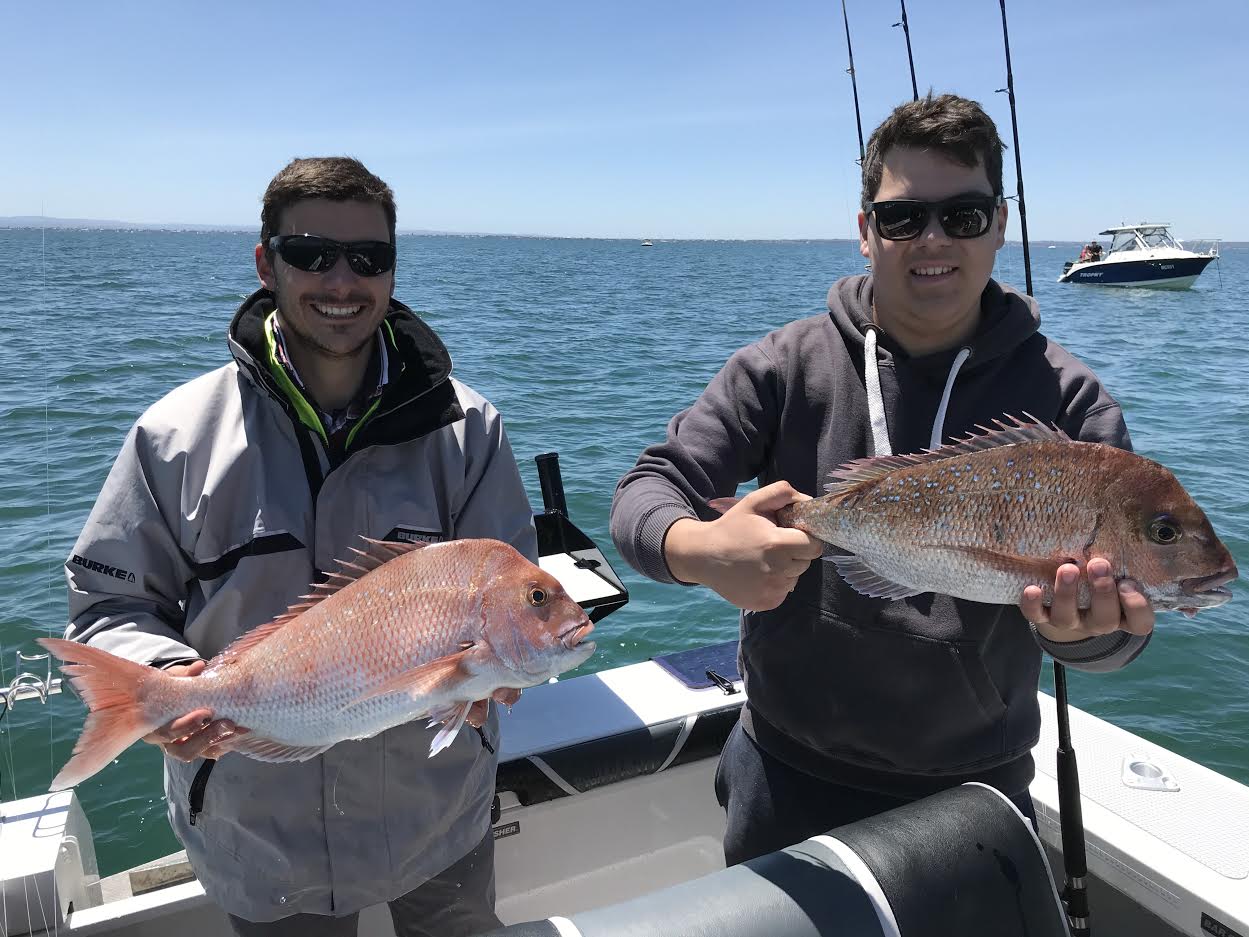 Matt and Luka getting the job done

Queenscliff is on fire at the moment for Calamari and they are big! Anglers fishing the area known as the bight with baited jigs are having no worries in scoring themselves a bag of Squid in no time. The Squid are still sitting on their eggs so if you can find the eggs you will find the Squid. Inside the harbour is still fishing very well for a whole host of species, David Le went for a flick on the weekend and found himself some large schools of feisty Australian Salmon climbing all over his lures. David also landed some cracking Silver Trevally on soft plastics to 40cm which are great fun in the fast flowing water, there are also still plenty of Pinkies on the chew in the same area. 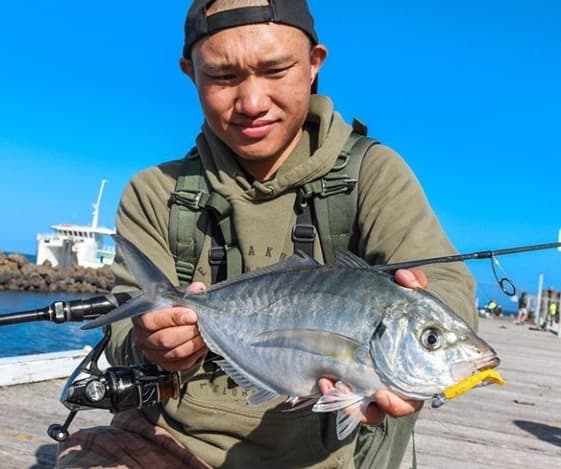 The River is on the rise at the moment, still fishing quite well, Cod have made an appearance around Seymour to Nagambie, close to Seymour township on Cheese, Chicken, Bardi Grubs and Scrubworms working the best, Bassman 4X4 Spinnerbaits in colour 19 and Old Mate colour 01 in 15ft.
As you get closer to Nagambie, around the Wineries things are really starting to heat up, Trolling big Deep Divers such as White Crows and Coddogs along the drop off near the banks the way to go, a few nice sized Cod on Surface Lures directly across from the Caravan Park near the new Boat Ramp.
I had this report emailed to me from Nagambie local Hugo
Another awesome start to the cod season around the Kirwan’s Bridge, Nagambie region with plenty of fish being caught. Most around that 45cm-50cm mark, but the odd 60cm + being landed amongst them. Most popular method for getting a few on the board has been cheese, but the bigger fish are being caught on lures. Plenty of fish active on the surface on the calmer nights with Jackal pompadours being our go to lure of choice. 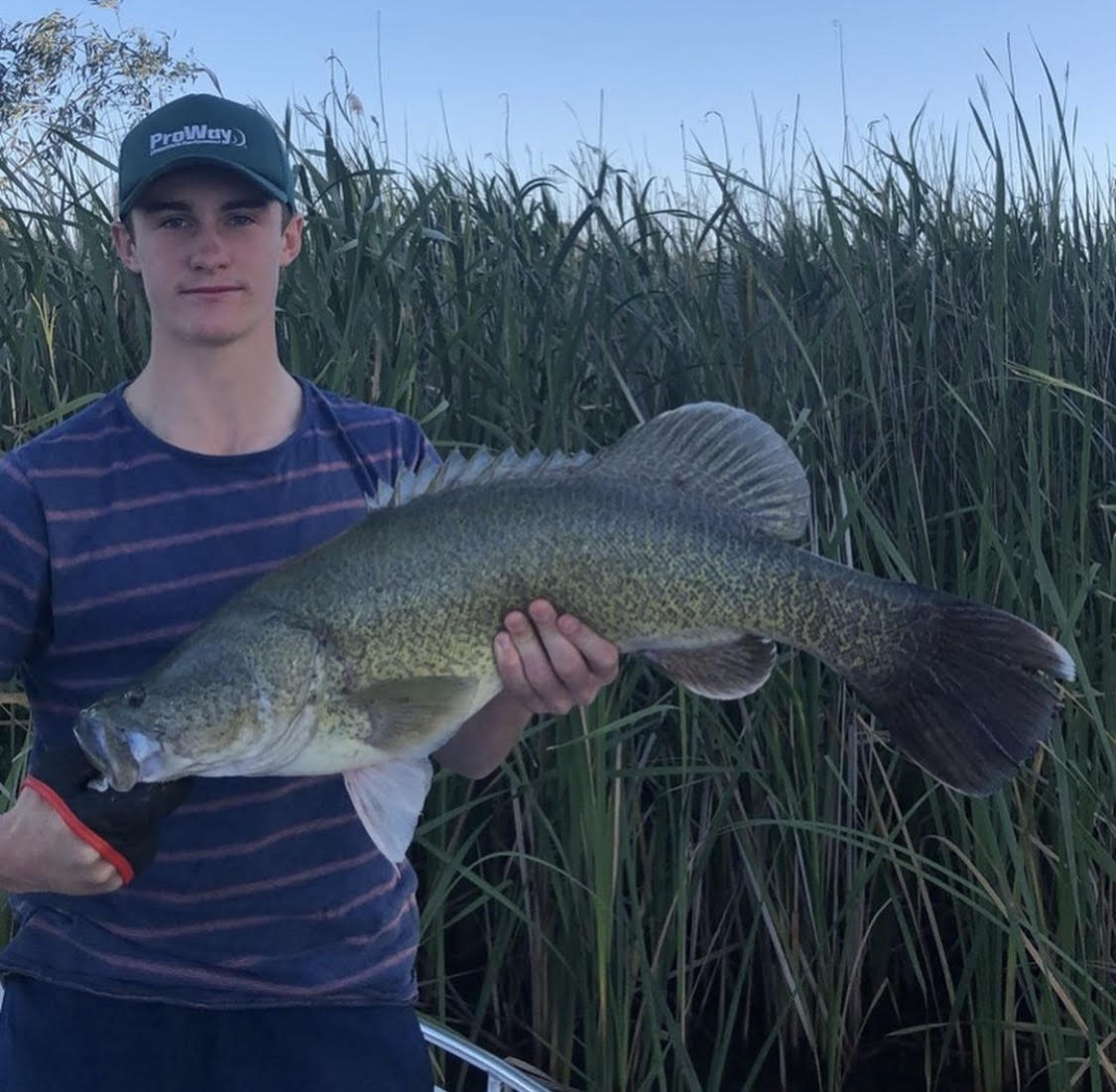 Tom Barnes with his cracking cod caught on a Westin Swimbait

Below the Weir is fishing well, the River is on the Rise and is flowing a little harder than last week, but still really fishable and there are plenty of Cod being caught, Murchison to Toolamba is the standout, try to get off the beaten track a little and try a few spots that haven't been hammered. Spinnerbaits have been working really well, cast them right into the snags, let them sink right down, watching your line for hit on the drop, then very very slowly retrieve the lure, have a variety of colours, one day bright orange and chartreuse is working well, the next natural and purples doing the job.
If things are a little tough, try some baits such as Bardi Grubs, Scrub Worms, Cheese and Yabbies will get you on the board.

When the wind drops, Waranga Basin is going alright with some good fish coming off lures and bait. Trolling around Harrimans point and the caravan park has been good for picking up some nice Redfin with some big ones mixed in with the smaller school fish. Yellowbelly have also been caught trolling near the wall using lures like 55mm Codgers and 50mm rmg Poltergeists.
The local channels are fishing well, Pro Staffers Nelson and Shane took Shane’s daughters out to the Main Eastern Channel last week with Payton getting some nice Redfin and Yellowbelly on Worms. 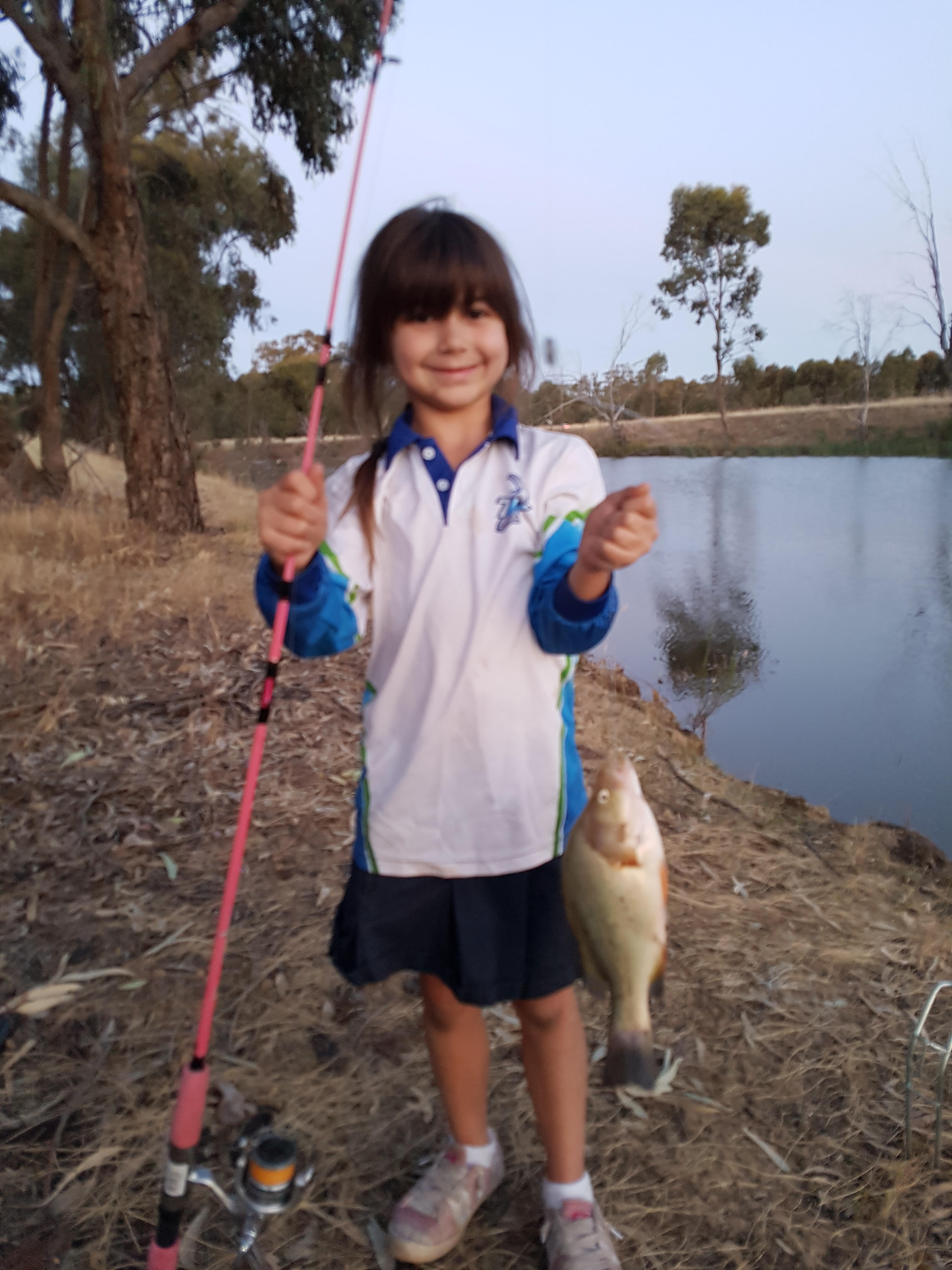 Payton putting the boys to shame with this cracking Yellowbelly

We have had plenty of Reports of good numbers of Cod, mainly on Cheese being caught right along the Main Eastern Channel. 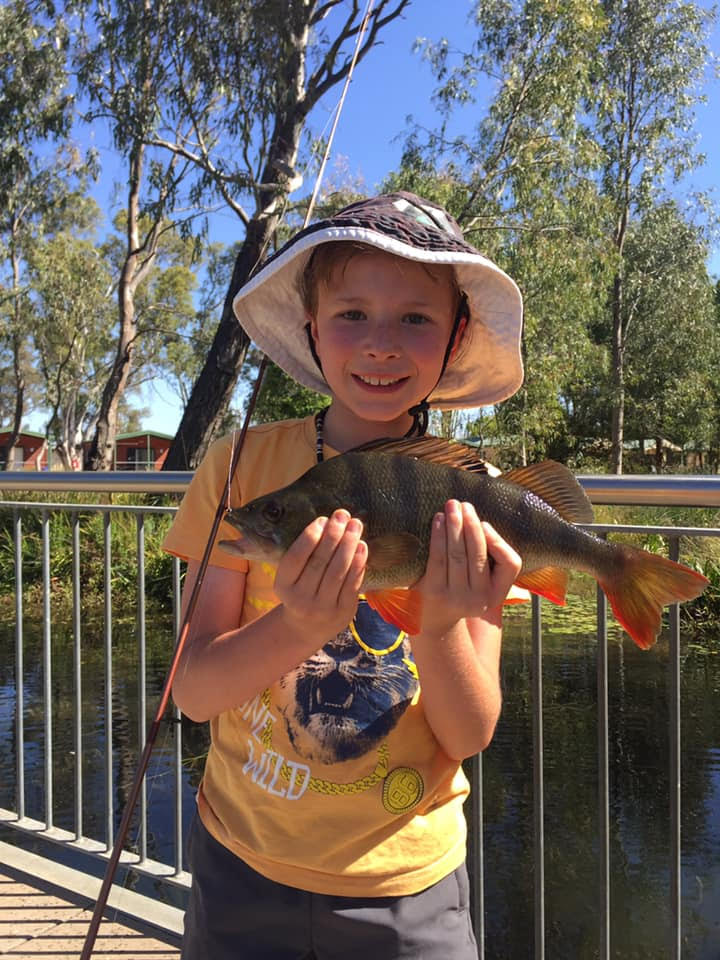 Young Zac showed his dad how its done again catching a nice looking Redfin from Lake Victoria in the CBD of Shepparton.

One of our regulars got his first metre plus Cod on a Pompadour, Black Bone in the Broken River near Benalla during the week, didn't have a brag mat, but after seeing the picture, the fish was well over 1 metre.

Reports are that as the River is rising the Cod have fired up near Echuca, Cheese and Scrubworms working well, and Trolling Old Mate’s and Codgers in greens seem to be the choice of lures. Plenty of big Cod at Gunbower Creek on Bardi Grubs, reports are that quite a few meter plus fish have been caught in the last week.
Bearii to Cobra/Wonga area’s have been fishing well, plenty of smaller Cod on Bassman, Pirate and 4D Spinnerbaits with most of the bigger Cod being caught on Surface lures such as the new Balista Tremor or big baits such as Chicken or Cheese.
After the hammering Mulwala got over the weekend, it is still producing good numbers of Cod, Jackall Swimbaits and Surface Lures working really well, fish between 45cm to 70cm common, but there has been some metre plus Cod caught on Cheese.

The Ovens is low and clear at the moment, perfect for Spinnerbaits and Surface Lures, especially between Peechelba and Wangaratta, whites and purples work well and Jackall Pompadours are the pick of the surface lures, take a Kayak if you have one to access more structure, boating is hard and you end up walking past heaps of structure you can’t access from the bank. Although most fish are between 45cm to 60cm, you will get big numbers and every now and then a shot at a monster.