The inner harbour of Corio Bay near and around the Yacht Club has been a popular spot for anglers lately trying to escape the crazy wind we have been having. Casting Soft Plastics like Gulp Turtleback Worms and Gulp 3” Minnows have been producing a great variety of fish such as Pinkie Snapper to 2kg, Flathead, Salmon and the odd Bream for some anglers. Fishing from a boat has been working best however there are still great results of these fish taken land based in the same area. There has also a great run of big Winter Snapper at the moment at night, bait fishing is working best and some of these fish are pushing 10kg. 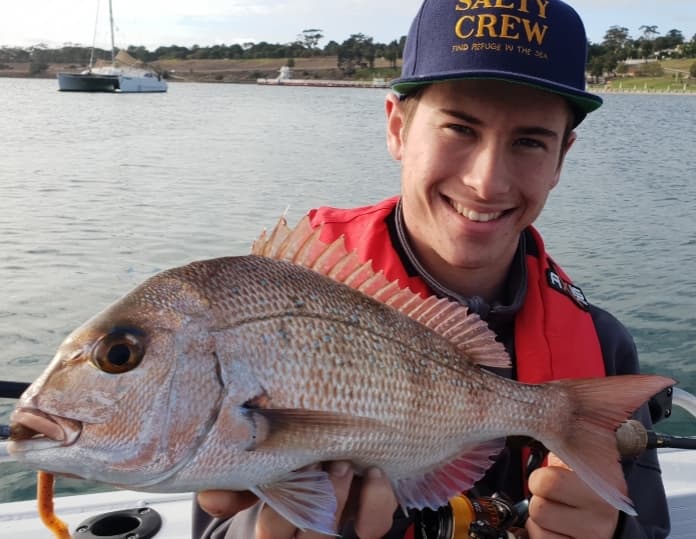 Anglers that have been able to get out over the past week have been getting onto some great Whiting. From Clifton springs all the way through to Queenscliff. Fishing a tide change ideally on an evening has been producing near bag limit captures for some Anglers and some of those fish are getting to 48cm. Queenscliff Bight has had a few reports come in with some large Calamari fishing the slack of a high tide with the cleaner water.

Gummy Sharks continue to be fishing well from Werribee all the way through to Queenscliff. St Leonards is still holding plenty of Sharks in 20 meters of water to around 10kg but there is still every chance of a much bigger one smashing up one of your baits. If you are chasing a bigger Shark the South Channel is still fishing well for them and even a few School Sharks in the mix also. Fresh bait has been working best such as Salmon or Pike cut into chunks, Fresh Calamari Heads and hood into Strips, even frozen Pilchards are working well too. Fishing a Running sinker rig is ideal and when fishing the tidal areas its pays to have a variety of different sinkers to accommodate the tide.

Tuna have still been going well along the West Coast from Port Fairy to Portland. Not many boats have been getting out due to the poor weather but those who have been have had no trouble getting bag limit captures on School Blue Fin. Trolling 3 – 5” Skirts and Diving lures have been producing the best results. There is still a few reports on Barrels out of Portland and Cape Bridgewater with fish getting well over 100kg.

Moorabool Reservoir has been a bit of a stand out as of late with Brown Trout Being taken up to 5lb. Casting a wide range of lures like Divers, Spoons, Plastics and even Fly have all been working well so it helps to go with some variety to find out what they want on the day.

Lake Bolac has been a bit hit and miss as of late, however persistent Anglers are still getting onto some nice Rainbow Trout. Fishing the banks with Powerbait or Pilchard fillets on a light running sinker rig has been the standout way to target them.

Still flowing quite hard and is very high, but surprisingly looks clean making, so Cray fishing is really difficult, however they are still around in big numbers, you just have to find some deeper fishable water, probably around the bends where there is less flow and the sticks and leaves are building up, otherwise the old stick with a string and a scoop net method working well also. Same with the fishing, some good sized Yellowbelly holding in the slower water, but it is really hard work with the flow, bobbing Worms and 3 inch Black Grubs working well.

Waranga basin has risen a little and the Blue Green Algae alert has been lifted for a while, and when the wind drops, has been fishing quite well for some good sized Redfin trolling small divers and bobbing 3 inch soft plastics once you have found a school, best spots are from the Wall to the Yacht club in the deeper water.
Quite a few nice sized Trout being caught in Victoria Lake on Powerbait 30cm under a float on a size 2 baitholder hook and the Fly fisho’s having a lot of fun as well. The main areas to focus on are from the big grass hill near Aqua Moves and along the Western Bank to the boat ramp. I did hear of a nice Cod in really shallow water in the Main Eastern Channel on cheese, so definitely worth walking the bank with some Spinnerbaits anywhere from Wahring Station to Invergordon.

Lake Mulwala is still the standout in the region at the moment, most fisho’s getting a few shots at some quality fish, nice to see a few coming off the top over the weekend again, but shallow Divers and Swimbaits are still the standout. Luke Rimato showing Jo Jo Rizzeri how it’s done , catching his PB 84cm Cod on a Koolabung Codcracker over the weekend, great work Luke. 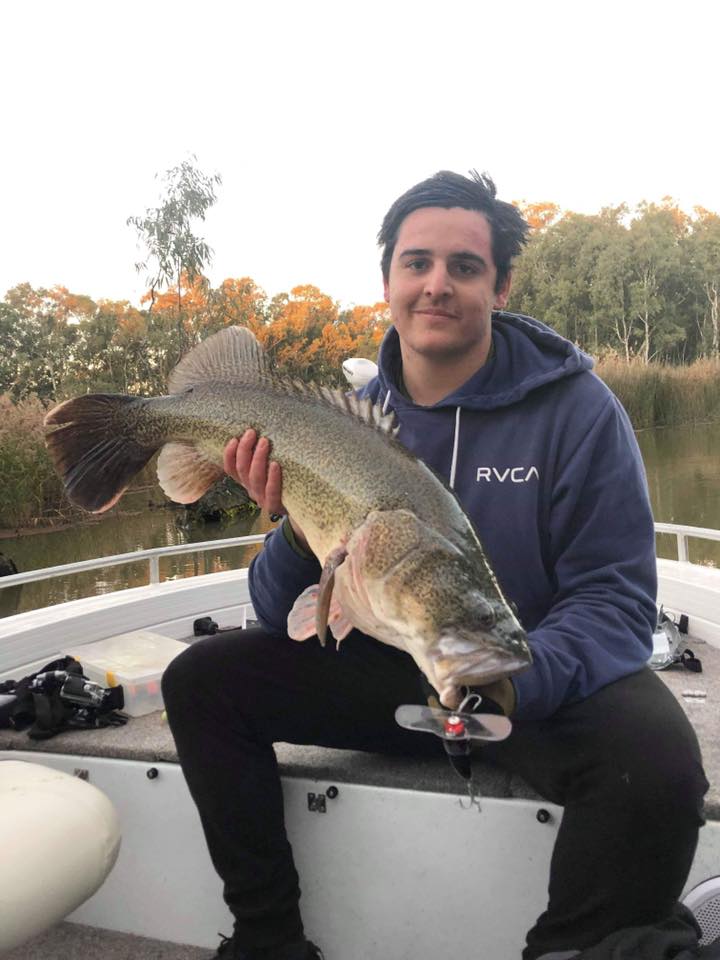 Water clarity has improved in most sections of the river. A few yellowbelly have been caught around the bridgewater area on Jackall tn60 an tn70 in darker colours such HL Black an TG Razor. Larger spinnerbaits an chatterbaits has produced a few quality Murray Cod for the few that have put in the hours. Upsizing lure size has been key to getting bites from the bigger cod.

Has been the slowest spot around but still the odd Cod being caught by fisherman using mainly chicken as bait. Has been a great season on the Campaspe things are looking great for cracking fishing once it finally warms up.

Trout have been getting caught in good numbers on powerbait trout nuggets and Gulp Alive Salmon Eggs on light running sinker rigs. Spinning with 13.5g Tassie Devils has produced a few fish aswell.

Slow rolling soft plastics close to the bottom plastics most sizes upto 3inch working well on light jigs heads no heavier than ¼ ounce. With white colours being the stand out with redfin patterned paddle tails being very affective also.

Schools of Redfin can be still found in the main basin best method being trolling until the school is located and then targeting them with icejigs, blades and softplastics fished vertically. Fishing baits of worms an yabbies would also be worth fishing over the schools.

Redfin are still being caught but they are very deep 7m – 10m the key has been finding the schools which are on the bottom. Slow rolling 3inch paddle tail softplastics on ¼ jigheads keeping the plastic bumping the bottom.