All the talk this week is the big winter snapper currently biting in Corio Bay. Jovica John Uzur ventured out under the cover of dark to try his luck in the inner harbour, he was rewarded for his efforts with 4 winter reds ranging in size from around 6kg to a whopping 10.58kg monster. Anglers hoping to try their luck at these fish should consider fishing after dark over a tide change with very light rigs or even unweighted where possible as the winter fish can be a lot fussier than the fish we see later in the year. Baits like silver whiting, pilchard and squid strips are all worth trying. 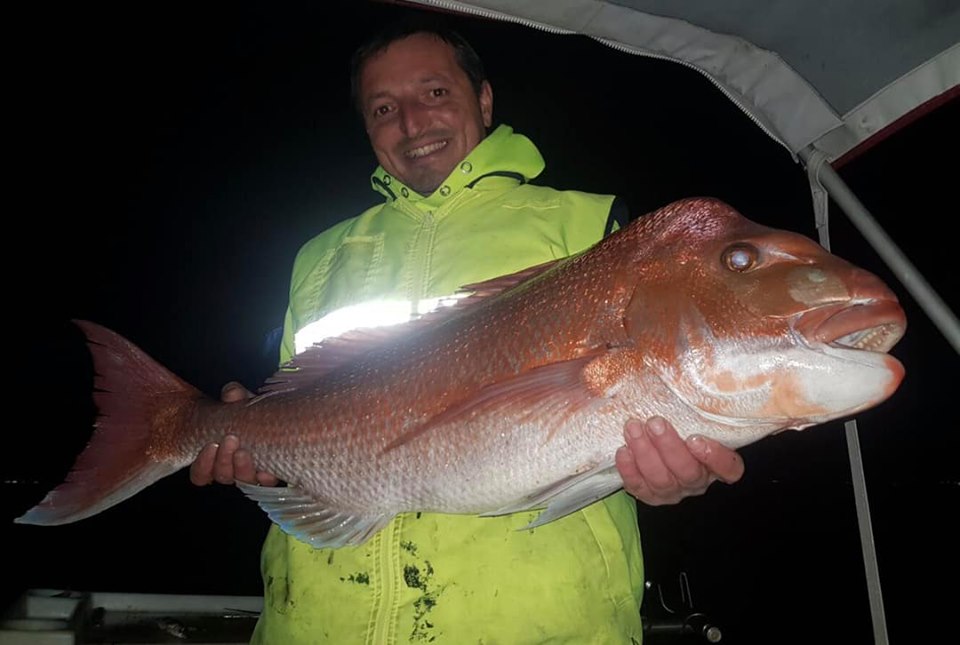 Still inside the inner harbour and King George whiting have appeared in good numbers throughout Stingaree near Limeburners boat ramp, using pippie on a light paternoster rig saw some anglers take a dozen or so fish pushing 40cm.
Bellarine peninsula

Squid were caught off St Leonards over the weed beds in around 3-5 meters of water. Size 3-3.5 jigs in a number of colours like pilchard, King George whiting and plain white all worked. Land based anglers chasing a squid can try Portarlington pier, Queenscliff pier and even the shallow water off Indented Heads boat ramp jetty.

Trevally were caught in the Queenscliff cut by anglers casting soft plastics around the slack water of either a high or low tide change. The Gulp turtleback worm and Z-man grub are productive plastics to try for fish close to 50cm, fishing around a tide change is essential so to work out the tides in the Queenscliff harbour, add roughly 3 hours to the Port Phillip Heads tide.

The salmon fishing along the coast was good this week with fish around 1.5kg being take from rock platforms and beach gutters. Casting 30-60gram metal lures worked well anywhere from Moggs creek to Marengo beach.

The Glenelg River at Nelson absolutely fired this week for mulloway up to around 85cm. both lures and bait worked as Cody Carruthers found while fishing well upstream of the township. Fishing through the dark using squid as bait, Cody caught a number of mulloway. Other anglers also report fantastic sessions catching mulloway, bream and estuary perch while casting lures towards the rivers edge from kayaks. 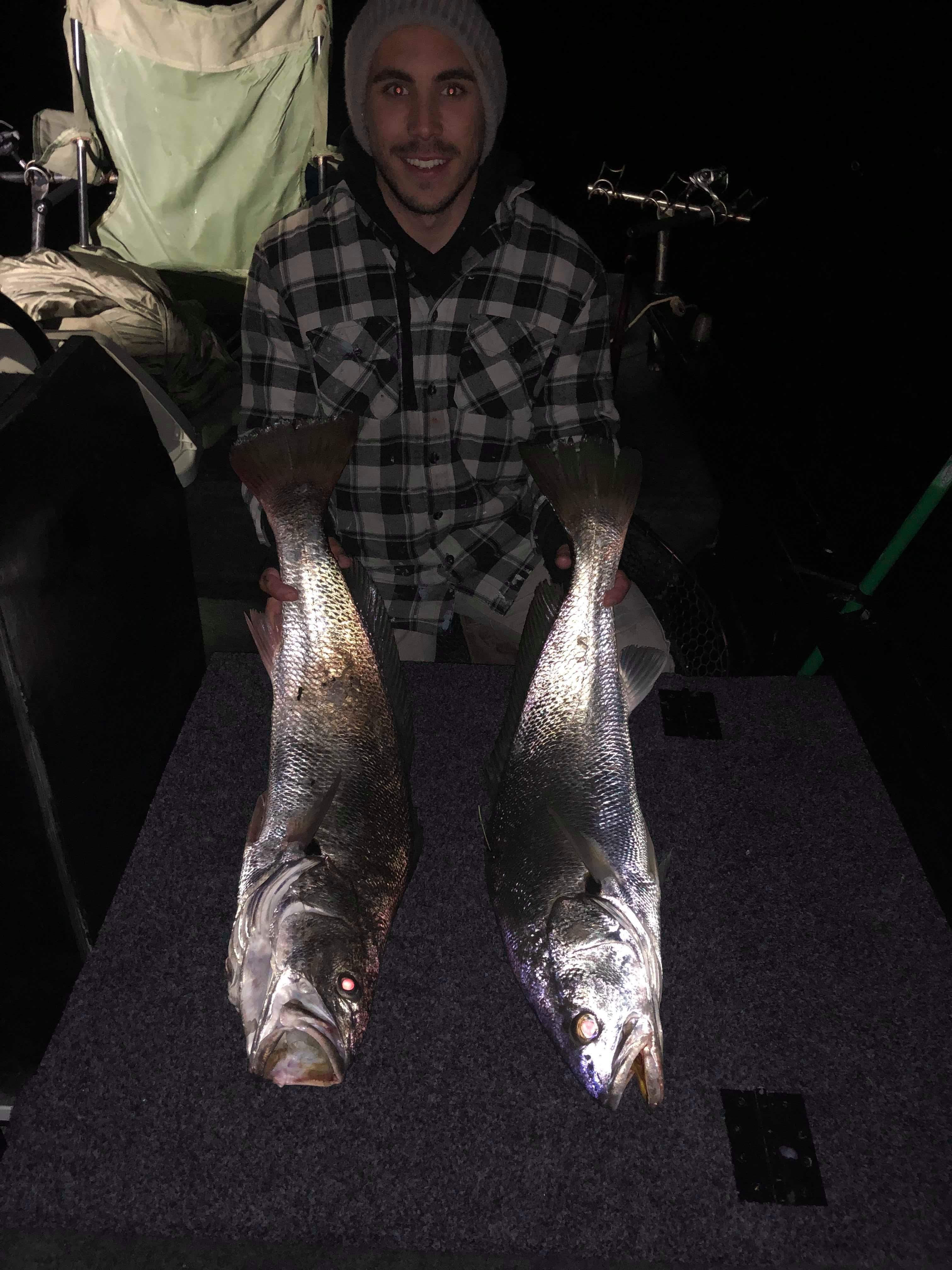 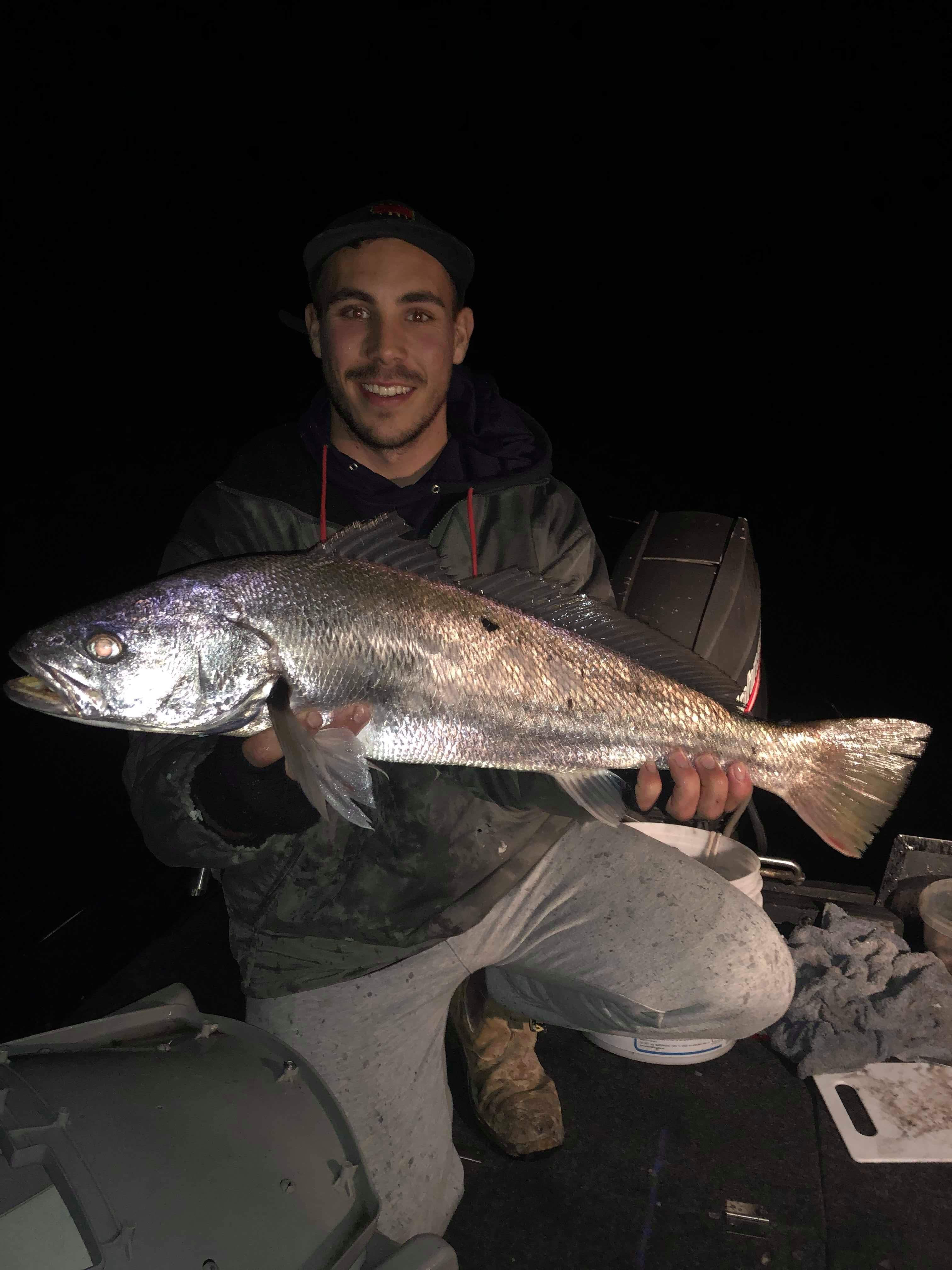 Some good Crays coming out of the Nagambie region, nets with up to 5 or more Crays not uncommon, mostly undersize or huge females, but you should be able to get your bag if you put the work in. Place your nets in the middle of the River, have plenty of rope, as the River is around 45ft deep in places, best baits are Carp chunks and Offal, and check your nets every 45 mins or so. A few Redfin on Worms and Trolling Size 3 Stumpjumpers along the Dead trees on the banks of the River. Still plenty of Crays below the Weir, especially around Murchison, the River looks great, but the Cod and Yellowbelly have been really slow, one thing is that when you find a fish, they have been above average in size, so fishing the surface with big lures will give you every chance of a monster Cod at the moment. We did hear of a few Cod and Yellowbelly around Undera, bait fishing with Big Yabbies or Scrubworms seems to be the best method.

Winter is really starting to kick in now, most Channels are nearly empty. The local lakes are getting stocked over the next week or so, wich will give the Kids a good shot at some nice Trout, Powerbait or a Worm under a float the best method. A few small Cod on Jackall Pompadours in the Broken River towards Benella, mostly fish around 45cm.

Lake Eildon has been really hard at the moment, hopefully with the Rain during the week defrosting all the snow, the Lake will start to rise and stir the fish up, we spoke to a group from Melbourne, 8 boats for 2 fish!, however Krystal Garcia  managed this nice Rainbow Trout in the Pondage. 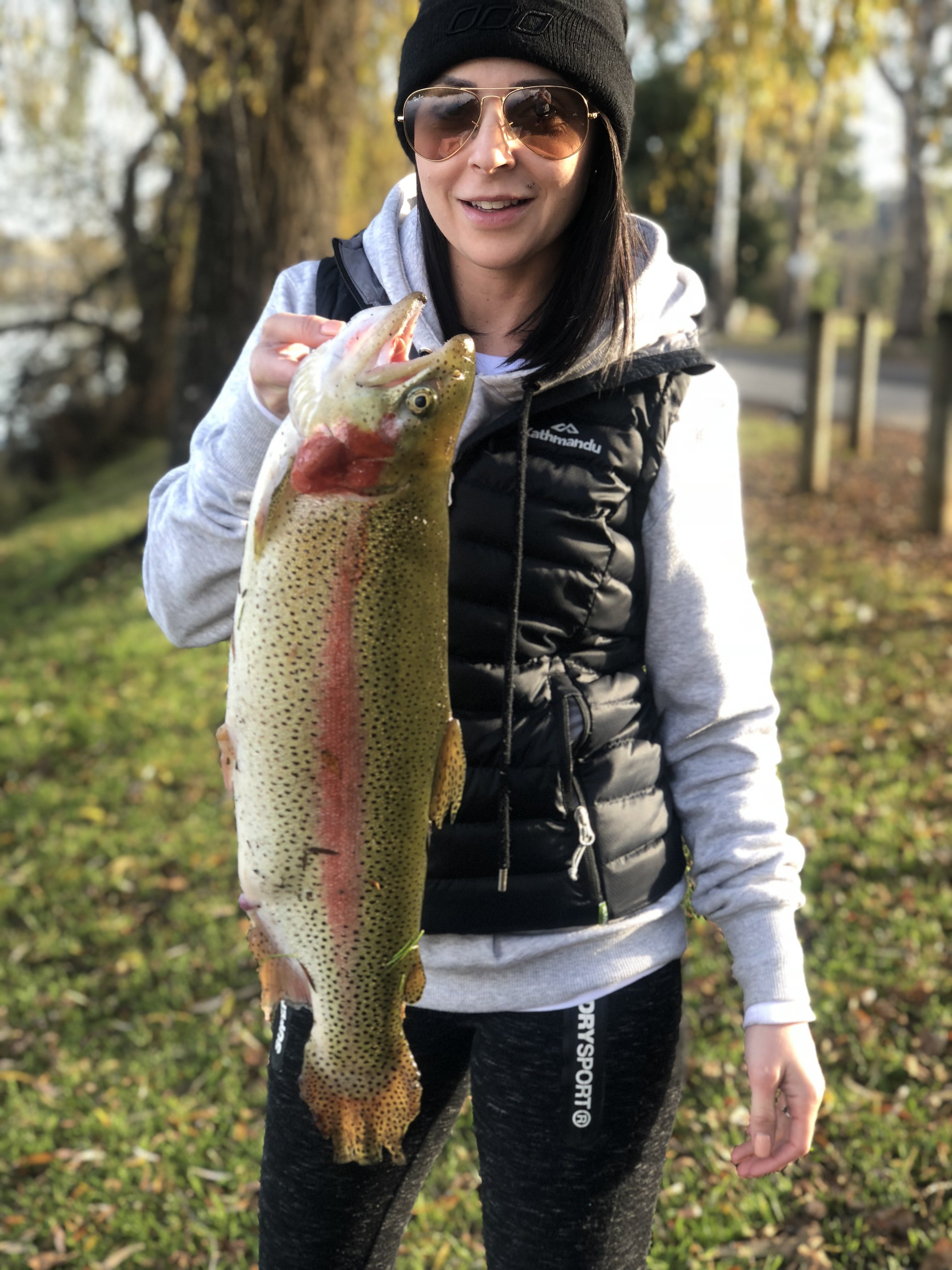 Below the Weir is quite low and clear, not huge numbers of fish, but what has been caught are big, some good Metre fish on surface lures are being caught around Barmah and Bearii. Some nice Crays around Cobram, mainly overnight fishing. Lake Mulwala has been hit and miss, once again the fish being caught are mainly big, and Big Surface lures doing the damage. Some nice Crays at Bunderlong also, and a few good Cod up the Ovens in the same area.

The Loddon River System has received a good amount of rainfall in recent weeks but as a result the water has dirtied up and the fishing has subsequently slowed down.
Fishing at Cairn Curran has been tough but there has been the odd report of Redfin and Golden Perch being caught in deeper water. Trolling small deep diving lures on light line around the 10 metre mark is a great way to target these fish and once located dropping worms, yabbies, soft plastics and ice jigs straight down will produce fish.
Downstream of Cairn Curran, from Laanecoorie to Bridgewater, there has been the odd report of big Murray Cod being caught on large jointed surface lures. But the standout has been casting medium sized hard body lures such as Codgers and AC Invaders to structure and weed beds. This has produced some big encounters for those putting in the hard yards.

The Campaspe River has been firing over the Queen’s Birthday Long Weekend. Anglers putting in the hours have been rewarded with some nice sized Murray Cod up to the 90cm mark all caught downstream of Lake Eppalock through to Rochester casting surface lures, hardbodies and spinnerbaits. For those bait fishing, cheese has been the standout with some nice Murray Cod to the 80cm mark being caught while scrubworms have been catching the odd Golden Perch. 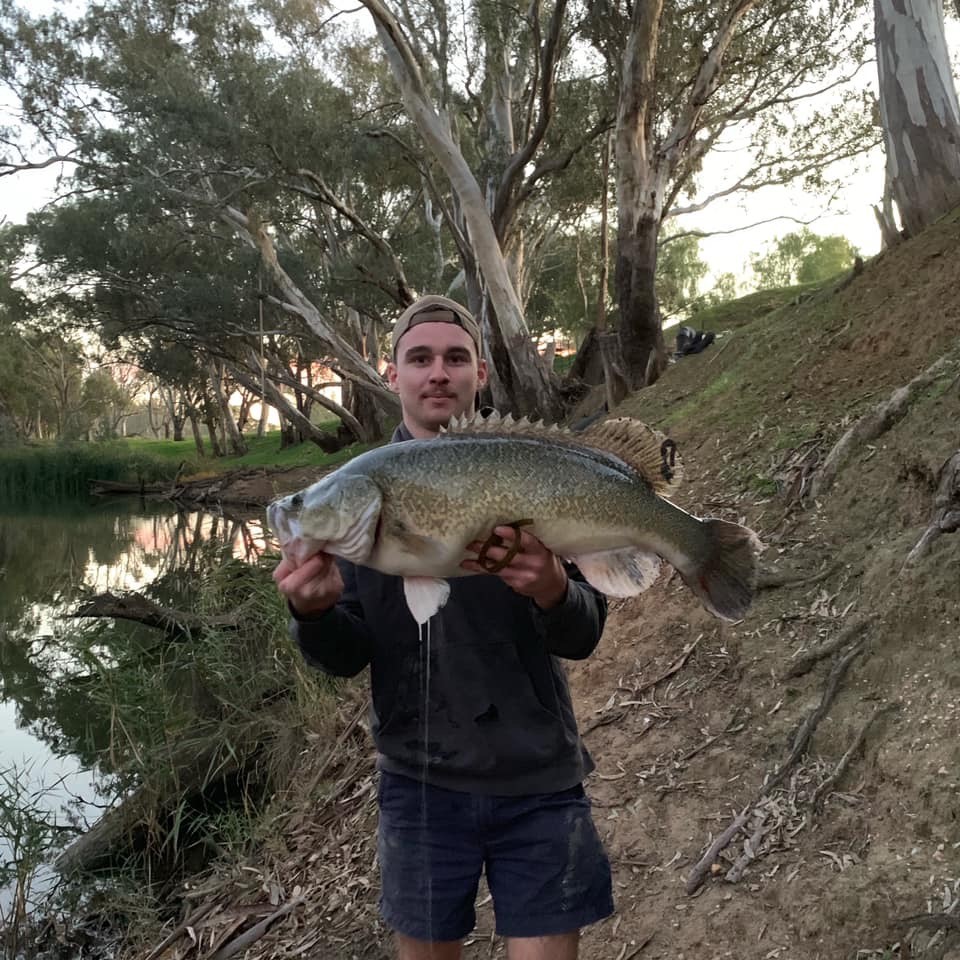 Nathan Zoch with a 90cm Murray Cod caught in the Campaspe over the Queen’s Birthday Long Weekend.

After the success of opening up Tullaroop to electric powered vessels in recent weeks the pressure on the fishery has seen it quiten off over the Long Weekend with many anglers struggling to catch a fish. The fish will have moved deep so running small deep diving hard bodies such as Halco Crazy Deeps and 50mm AC Invades with a 30ft bib on light line will be your best bet to find where these fish are holding. 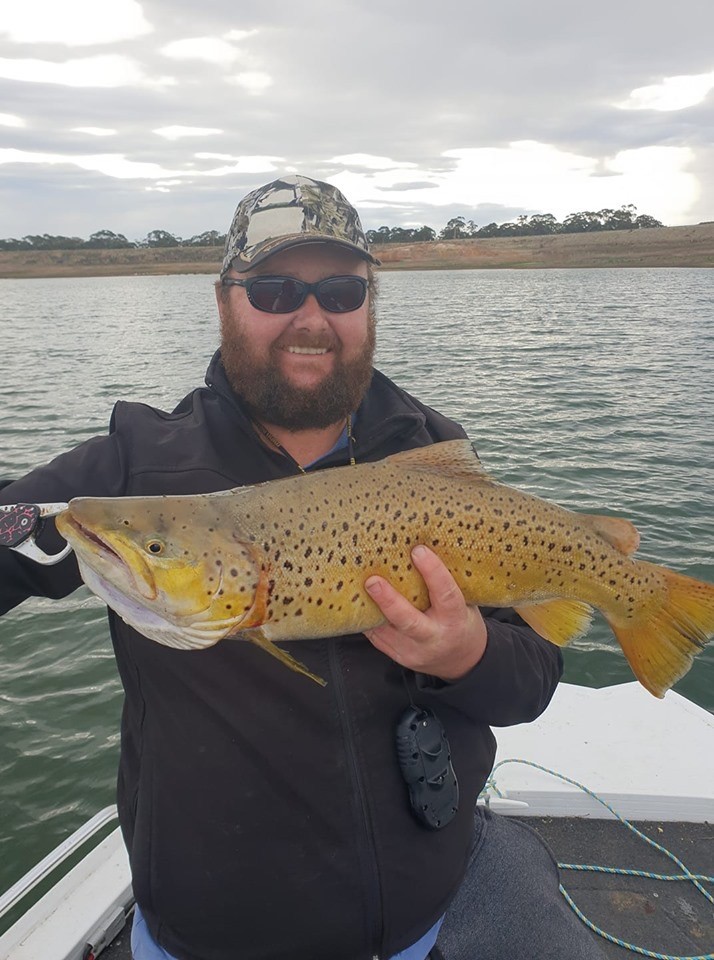 Mark Andriske with a cracking Brown Trout caught at Tullaroop

Those trolling deep diving hardbody lures up to 150mm such as the AC Invader, Old Mate and Oargee Plow in bright multi coloured and frog patterns have been landing some solid Murray Cod.

If you are heading to Mulwala, make sure you have some Jackall Swimbaits!!! The Gantia and Ganteral have been the standouts by far. A super slow retrieve with a 1/4oz chin weight and a whole lot of patience will get the best result.
Brightly coloured spinnerbaits are also enticing both Murray Cod and Golden Perch with bait fishers also having success of chicken and cheese. 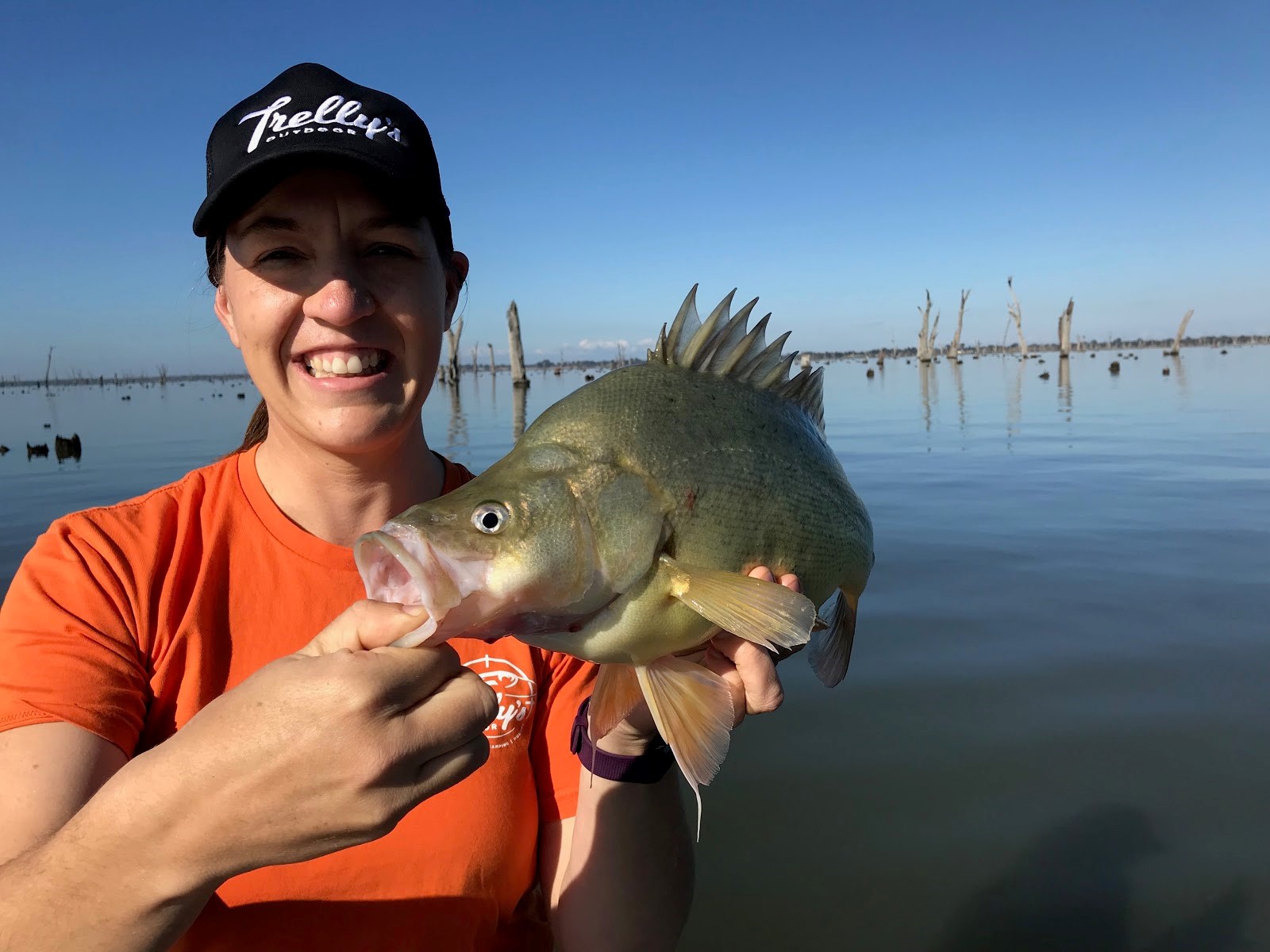