Winter got off to a great start with some fantastic trout fishing had all over the region. Lake Purrumbete saw brown trout to 8lb caught by anglers using bait or casting and trolling lures. Fishing on the outside of the weed beds on the north-east side of the lake was productive at first light where casting bigger hard body lures like the Daiwa double clutch or atomic jerk minnow caught trout while anglers fishing mudeye under a float also caught fish. It’s a good idea to target trout from first light to mid-morning then focus on redfin which are in huge numbers and happily bite all day.

Since Tullaroop Reservoir was recently opened up to kayak and electric powered boats we’ve seen some fantastic captures. One angler to do well was Damien Keirl who caught a beautiful rainbow trout of 3kg on a mudeye. He also caught a few smaller trout on trolled tassie devils and witnessed another angler land a redfin of 48cm. land based anglers also did well on tassie devils and soft plastics cast off the bank.
Wurdibuloc reservoir continued to produce big redfin close to 50cm to those casting lures of a morning. 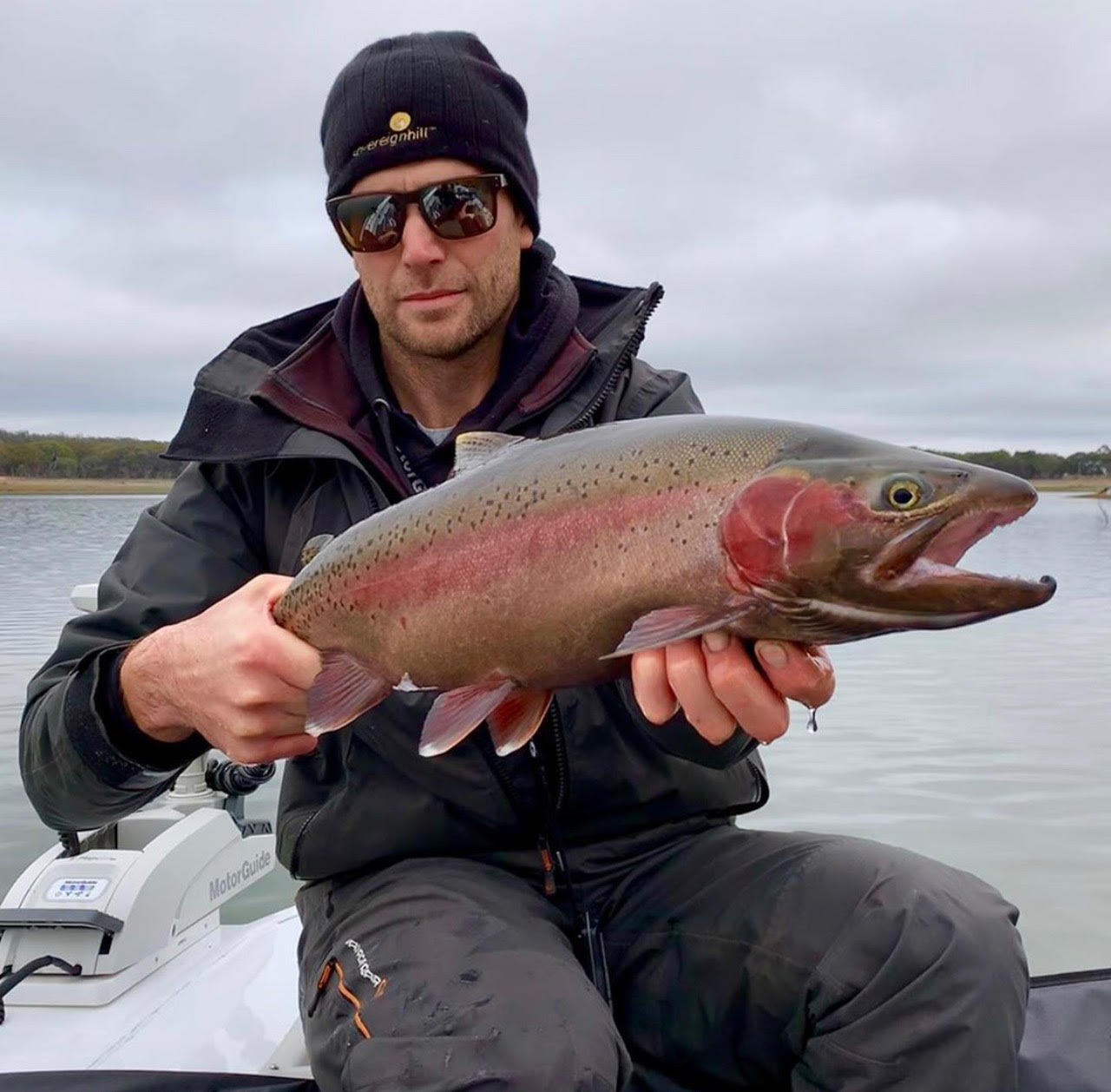 Stony creek has seen some nice sized brown and rainbow trout come on the chew with spoon style lures working a treat.

Small estuary creeks along the surf coast fished well for bream and mullet. Using scrubworms or fresh caught shrimp with a small ball sinker or even unweighted where possible was effective while using live crabs and small freshwater yabbies is a good way to specifically target the bigger fish.

ALL SAMURAI RODS 25% OFF 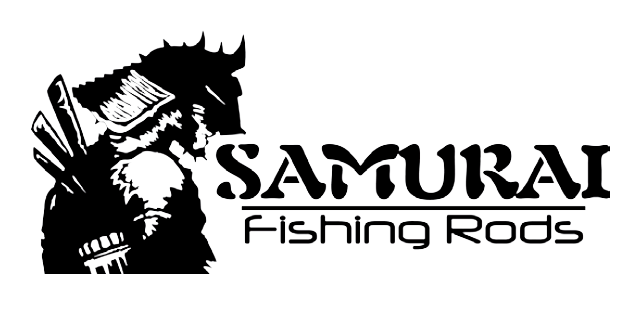 Pinkie snapper have made them selves at home right along the Geelong Waterfront and are snapping up Gulp turtleback worms. The odd school of Australian Salmon have busted up at times too.

Surf beaches from Point Lonsdale across to Anglesea saw a number of gummy shark and mulloway caught by anglers fishing after dark. James Ivens fished near Torquay during the week and caught a pair of gummy sharks within 20 minutes of fishing, the first had eaten his pilchard bait before he even had a chance to put the rod down after casting. Baits to try include pilchard, squid and fresh caught salmon fillet.

The Crayfish are abundant around the 2 wineries at Nagambie, plenty of crays on every pull, unfortunately, plenty of undersize or big females, but you should get your bag if you put the time in, a good tip is to make sure you put your nets in the middle of the River which means you will need plenty of rope as it is around 45ft in some places, any meat or carp chunks will get the job done, and PLEASE make sure you double check your regulastions. Other than Crays, fishing has been pretty hard work, only heard of 1 angler, Paul, catching 7 Cod in a session on a Jackall Chibatarel somewhere near Kirwans Bridge?, maybe smaller lures are will do the trick at the moment. Below the Weir is looking really good, Crays are fishing well around Murchison and we did hear of some bigger Cod in the 70 to 80cm mark around Shepparton CBD on Cheese, the water is cold, but is really clear and surface lures will be worth a try.

Pro Staffers Steve (Trelly) and Shane (PIC) headed to the main bridge in Shepparton and released a couple of Metre plus Cod and some smaller models along with some massive Yellowbelly in Lake Victoria with Fisheries, they were electro Fished out of the Main Channel near Yarrawonga, the reason for this is these fish would be trapped between 2 drop bars when they drop the channel for maintenance, between this channel and the Main Eastern Channel, Fisheries have released well over a hundred Natives back into the Goulburn Rivers and local Lakes. 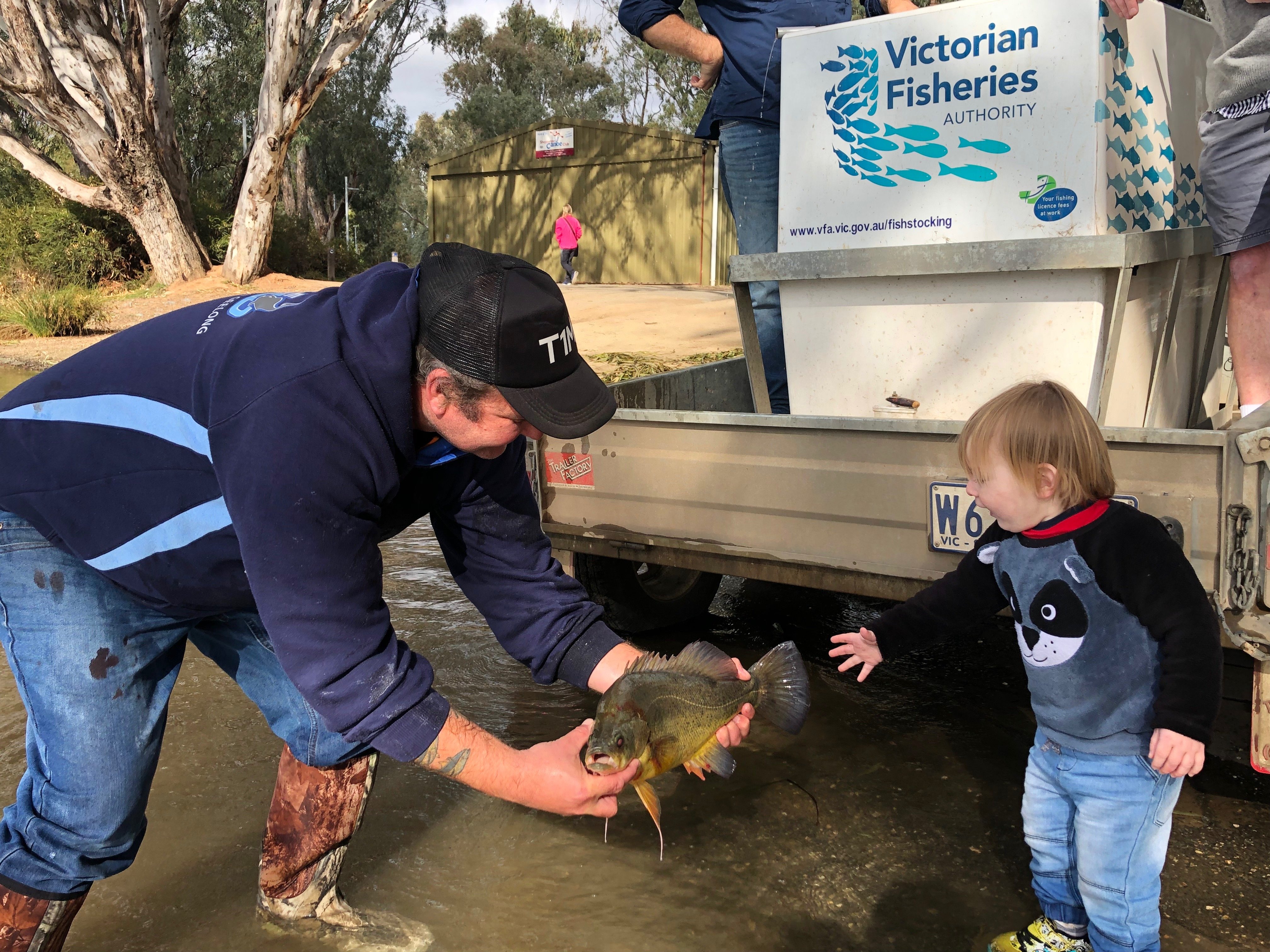 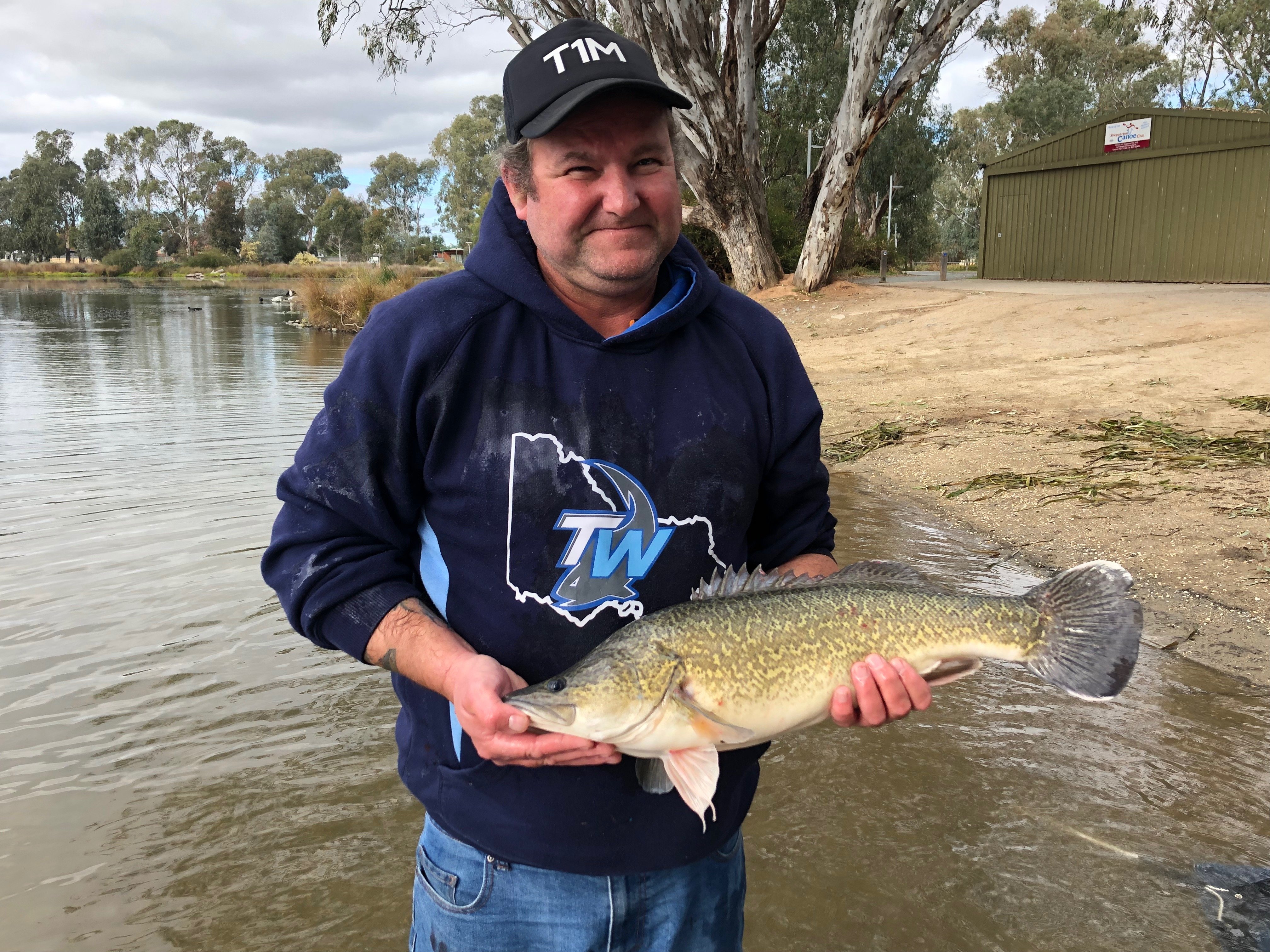 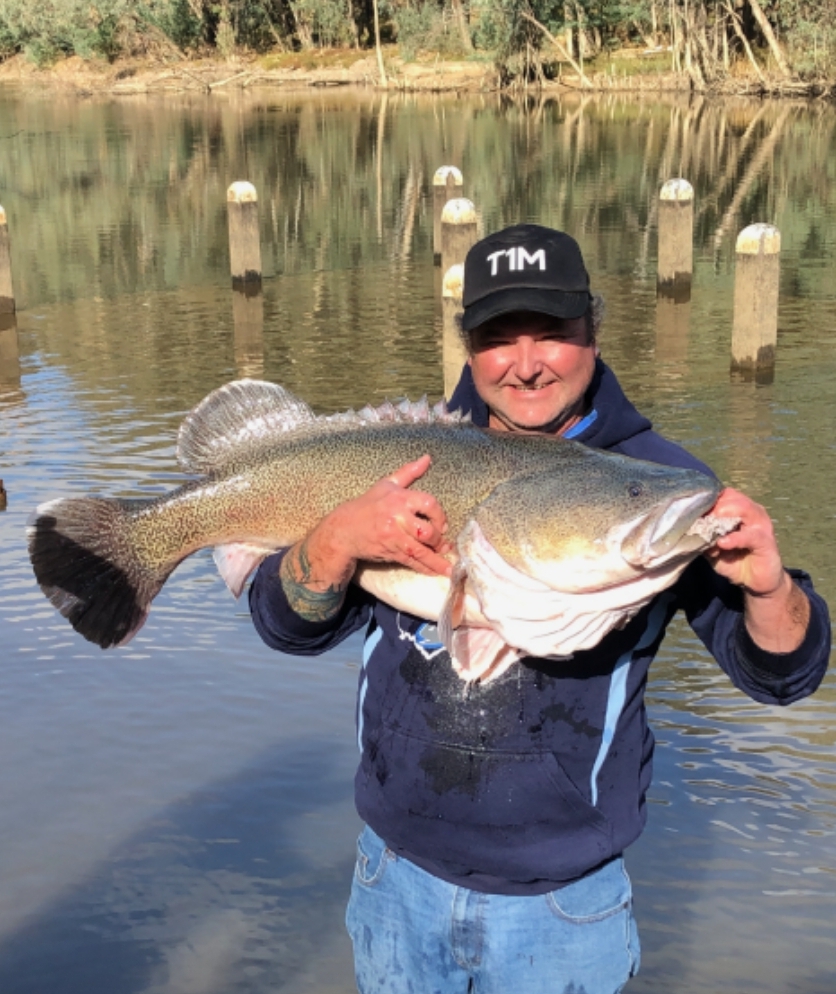 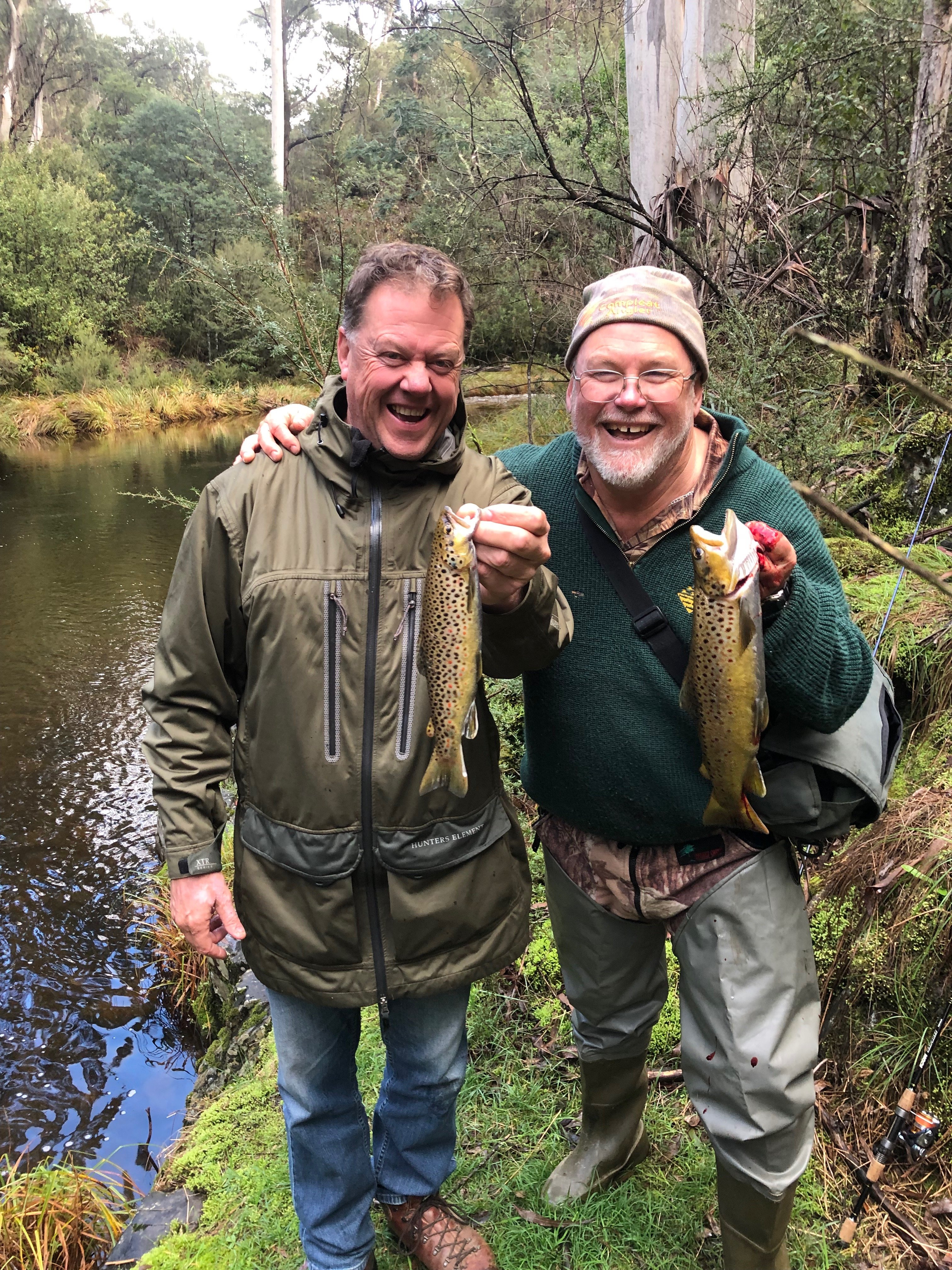 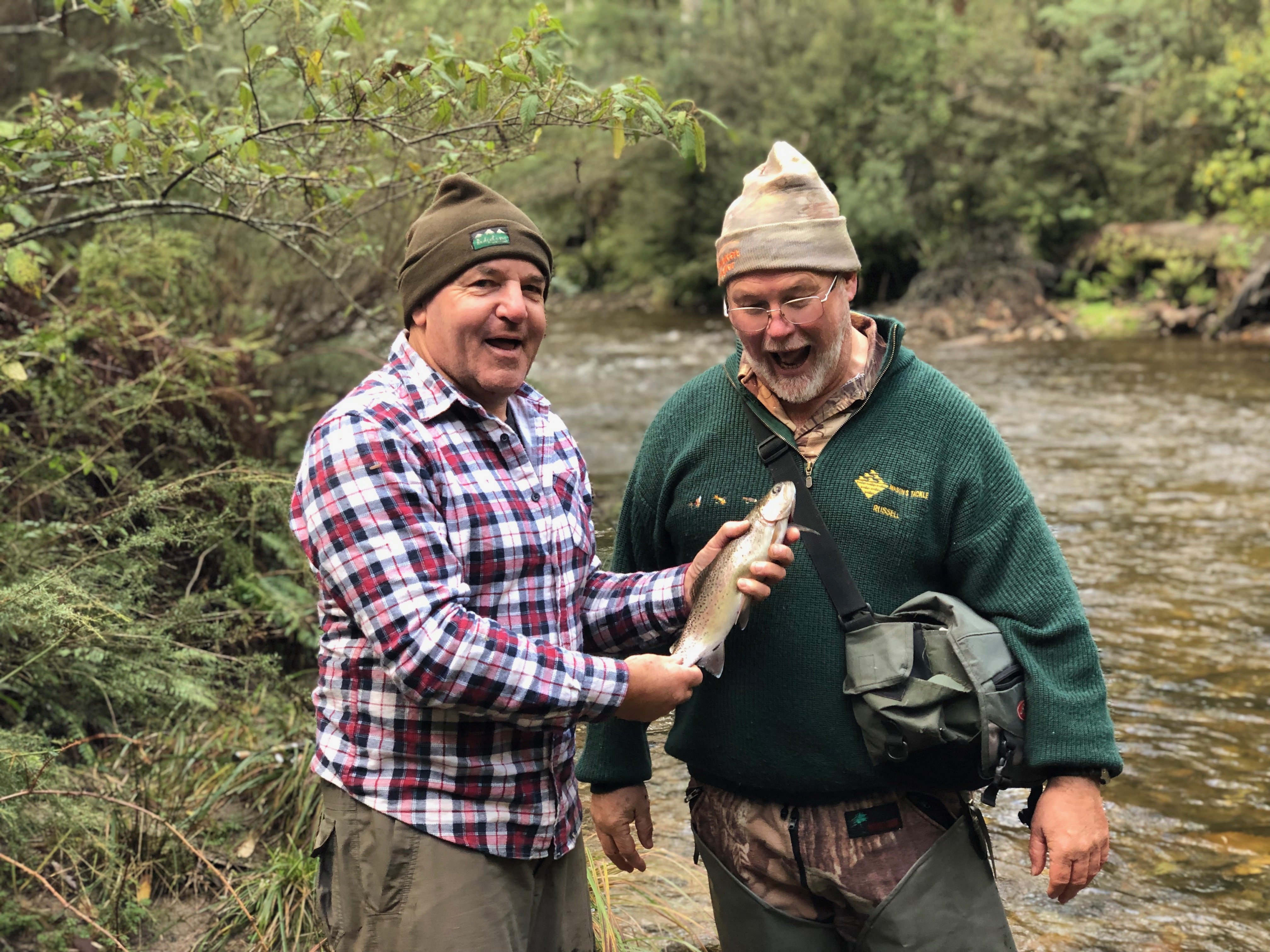 Waranga Basin still has a Blue Green Algae alert, so not too many Fisho’s have had a crack at the Redfin here for quite a while, most of the channels are slowly dropping, but still some nice Redfin and some good Yellowbelly in the one’s still holding some water, Worms seems to be the best method at the moment. A few Redfin and the occasional Trout being caught at Lake Victoria on Worms and Powerbait under a float, the great news is we released some absolute horse Yellowbelly and Cod with fisheries in the lake this week, and also Fisheries will be releasing a heap of Trout in the lake over the next few weeks for the school holidays, so get down there for as fish. A few smaller Cod on Jackall Pompadours in the Broken River towards Benalla.

The Murray and Lake Mulwala has been really hit and miss at the moment, it’s nice and clear, but fish are holding really tight on the bottom and are quite difficult to convince to take a lure, most fish we have hear out of Lake Mulwala, have been caught on Baits such as Chicken and Cheese. The River looks great below Yarrawonga, you will just have to work really hard with different lures to see what works for the day.

Pro Staffer Shane along with Jordan and Jacko headed to Port Welshpool having a ripper trip, catching plenty of Gummy Sharks, Flathead, Salmon, Calamari, Cuttlefish, 7 Gilled Sharks, Wrasse, Barracuda and lots of other bits and pieces. All the fish where caught off shore from 80ft of water towards the Cliffy Islands and inside Rabbit Island also, Fresh Trevally and Salmon the key on Snapper Snatches. The Salmon where pushing 2.5 to 3kg and holding on the inside north corner of Rabbit Island, hard up against the rocks, Berkley Soft Plastics the standout for them. 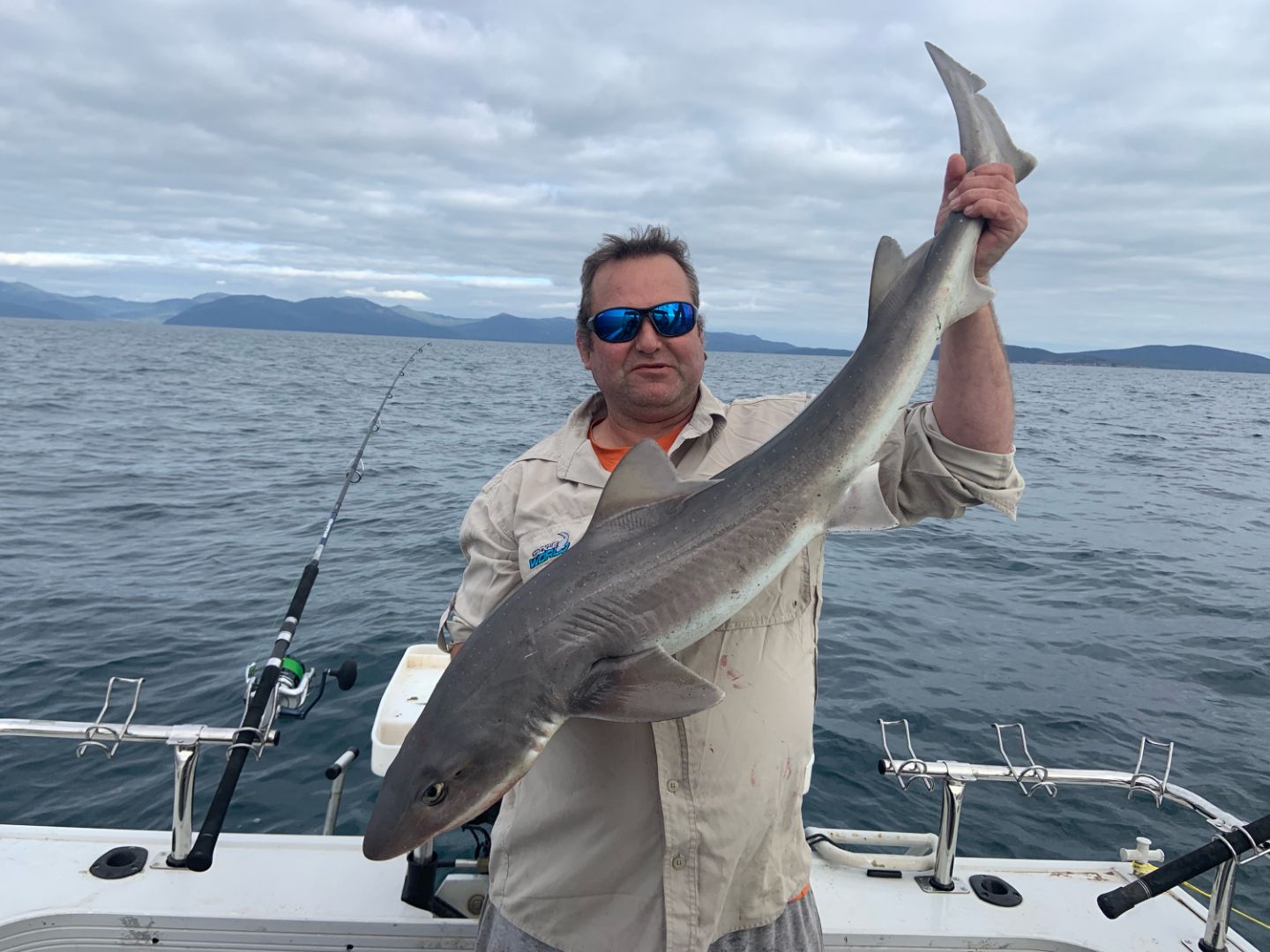 With the cooler weather upon us there is still some great fishing to be had in the Loddon River system. Cairn Curran Reservoir has been producing some solid Golden Perch. Small to medium hard body lures such as the #2 Stumpjumpers have consistently produced and those bait fishing have found success using yabbies on the bottom in approximately six metres of water.
Some great reports have been coming in downstream of Cairn Curran Reservoir through to Bridgewater with some nice Murray Cod caught casting tight to structure with hard bodies, spinnerbaits and surface lures. At the present time lures with a contrasting colour scheme are proving key with Pro-Staffer Shane landing a nice Golden Perch on a Gangster Lures Purple and Black Outcast Spinnerbait as well as two cod on a Bassman Spinnerbait in Black and Pink. As far as bait fishing goes by far the standout has been chicken with yabbies and scrub worms close behind. 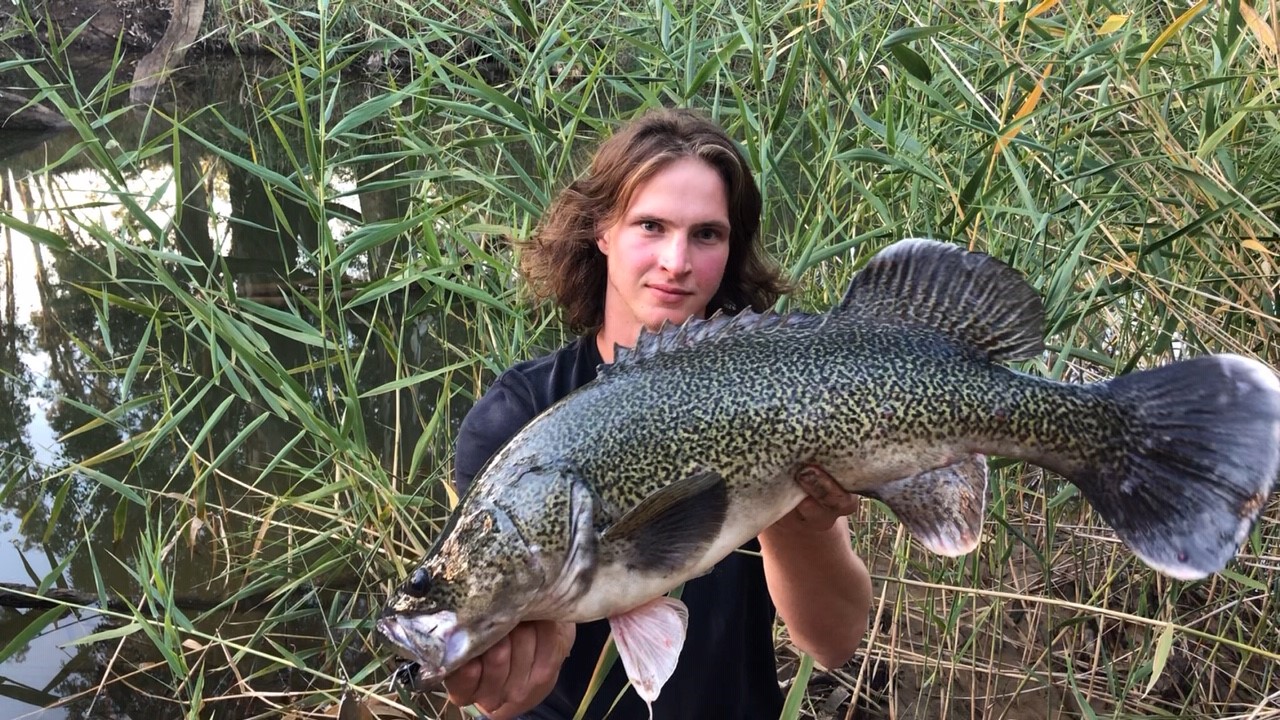 The Campaspe System has also produced its fair share of fish lately with some great fish to the meter mark being caught on surface lures such as Jackall Pompadour’s in Brown Dog and Blackbone. While brightly coloured spinnerbaits and hardbodies are also accounting for their fair share of Murray Cod and Golden Perch catches.
With Blue-Green Algae still at high levels at Lake Eppalock, it certainly hasn’t slowed the Redfin fishing down. Nice size Redfin to 1kg are being caught down deep in 8-10m of water on lures such as Jackall Mask Vibes and Squidgy Soft Plastics in the white colour variations. A great way to locate these fish is to troll small deep diving hardbodies on light line such as the RMG Halco Crazy Deep in Trelly’s Redfin Special. Once found, anchor up and drop bait such as scrub worms and yabbies or vertically jig heavy ice jigs/blades or mask vibes.

The full moon certainly got the big girls firing for some with shop regulars Wayne and Luke both landing 1 metre plus Murray Cod over the weekend. 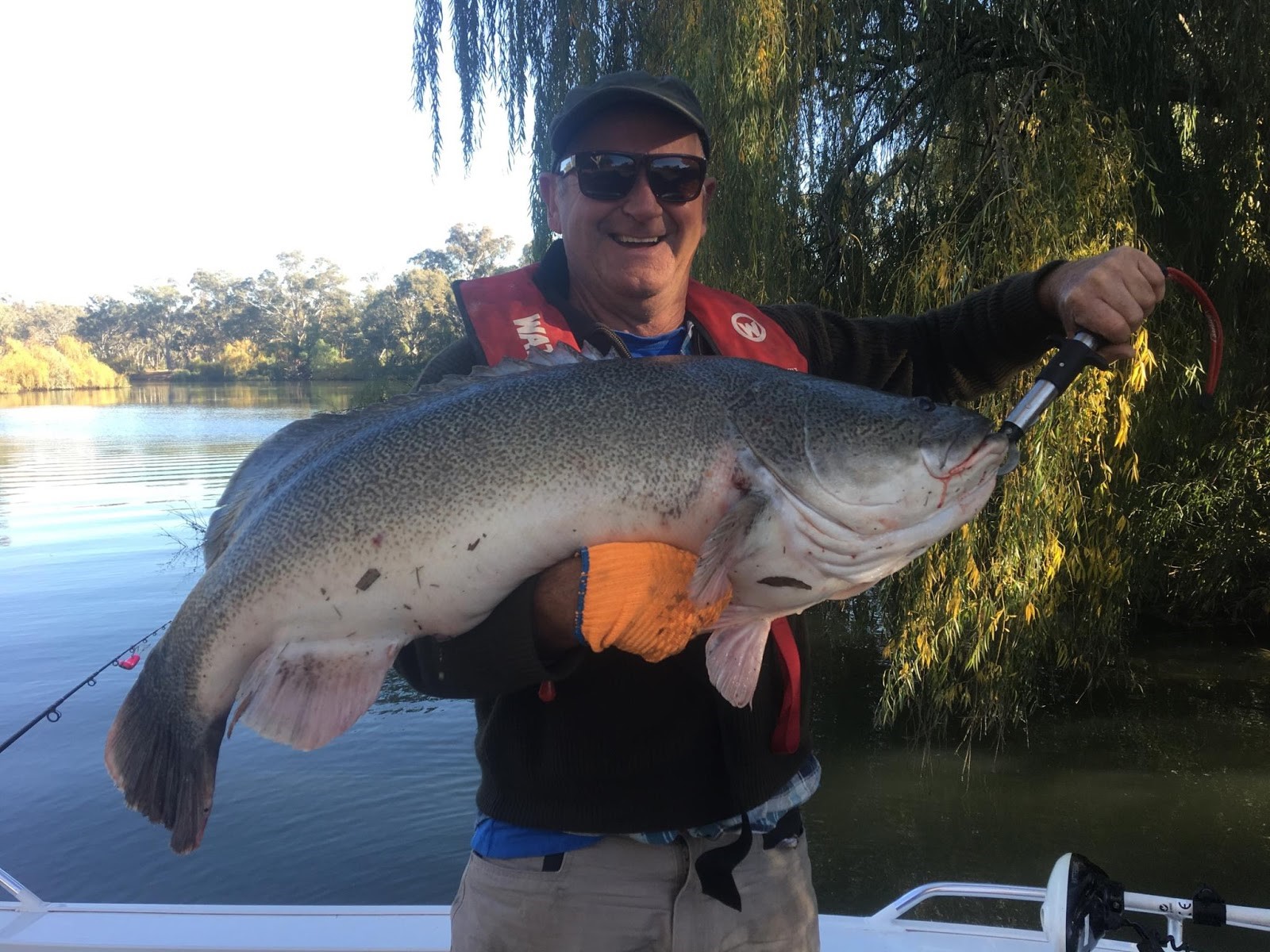 After calling past the shop en route to Mulwala, Luke Hartley didn’t take long to load up his new Venom Swimbait Rod with this cracking 102cm on a Jackall Swimbait. 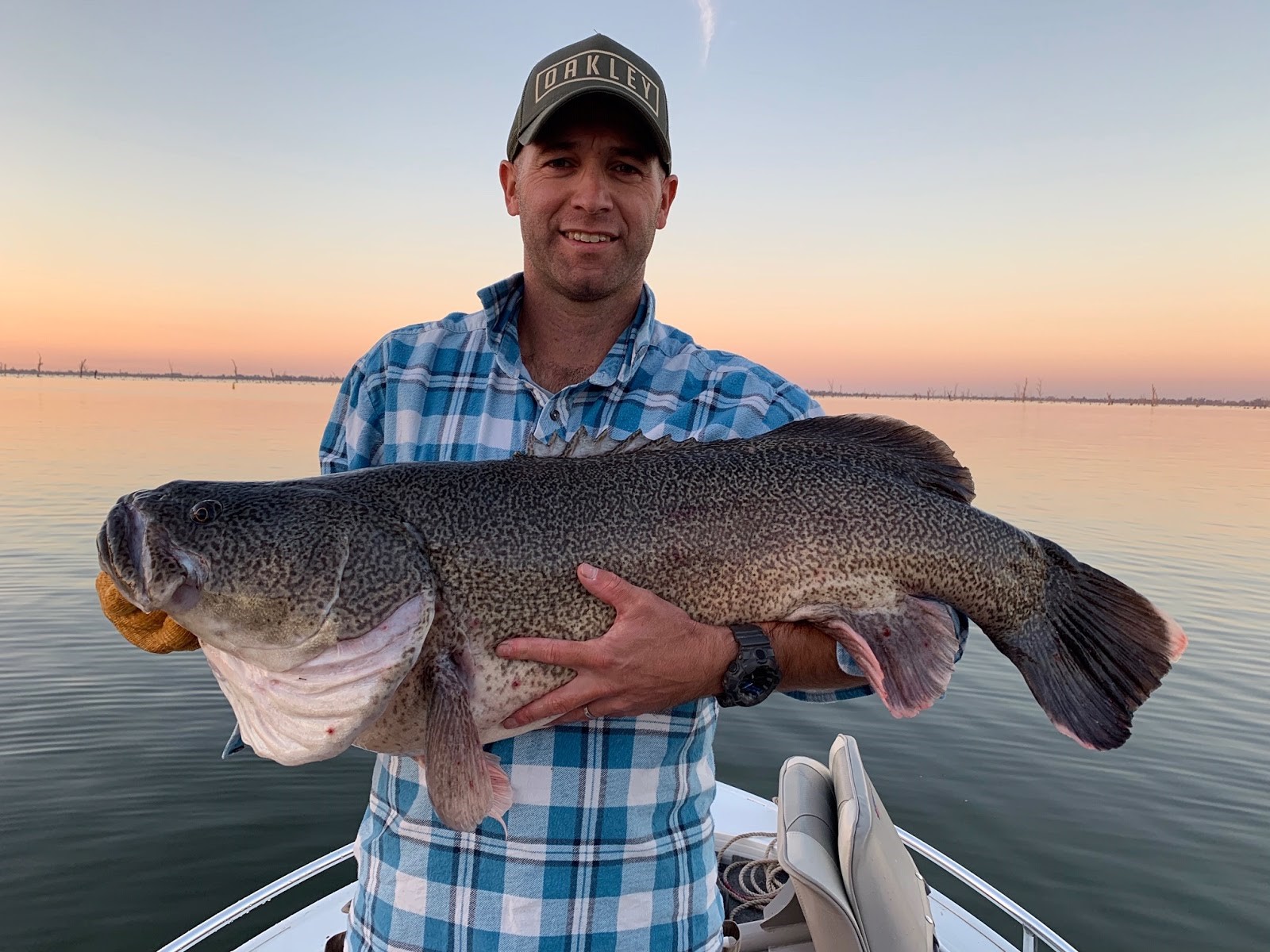