The Geelong yacht club area hosted great fishing over the last week with pinkie snapper to around 2kg and flathead to over 50cm. Peri Stavropoulos from Trelly’s Fishing World Geelong fished from the boat with friend Owen Westwell and managed a quality bag of fish while casting the Gulp turtleback worm and Gulp nemesis towards structure. To top off their outing they were lucky enough to have a big school of salmon erupt next to the boat which provided great fun of the light spin gear. The good fishing along the waterfront is also being experienced by anglers fishing from the bank where walking and casting plastics between Cunningham Pier and the yacht club has seen flathead and pinkies caught along with the odd bream. Bait anglers can expect similar results by using bluebait and pilchard. 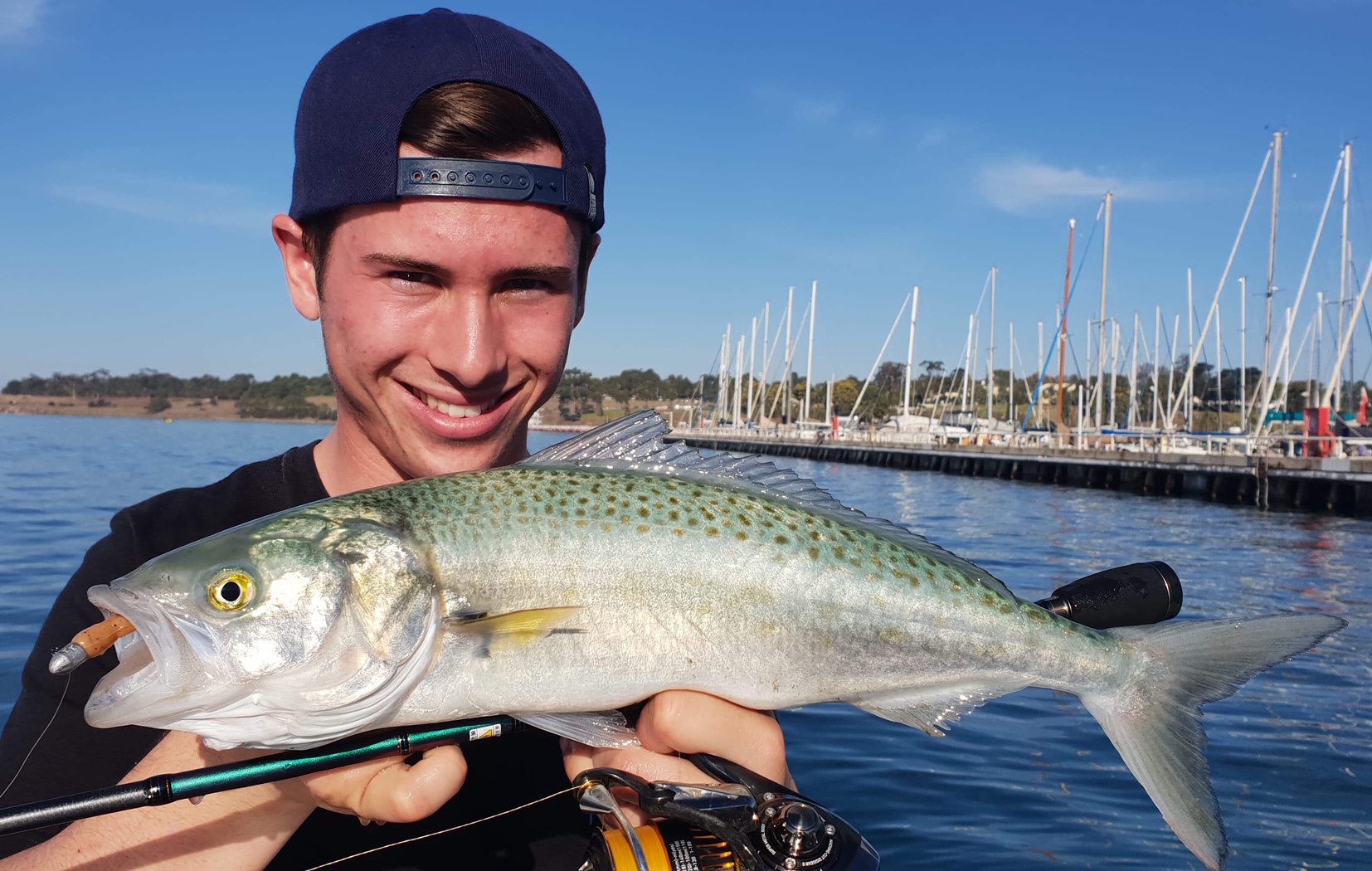 Surf fishing from local beaches has seen gummy shark, snapper and mulloway caught. Fishing from point Lonsdale to thirteenth beach produced mulloway to over 1mt with baits like squid heads and pilchards. One angler reports catching all 3 species in the space of an hour while fishing over a high tide at night. Bancoora beach and Jan Juc are also worth considering depending on which location will give you a tail wind. 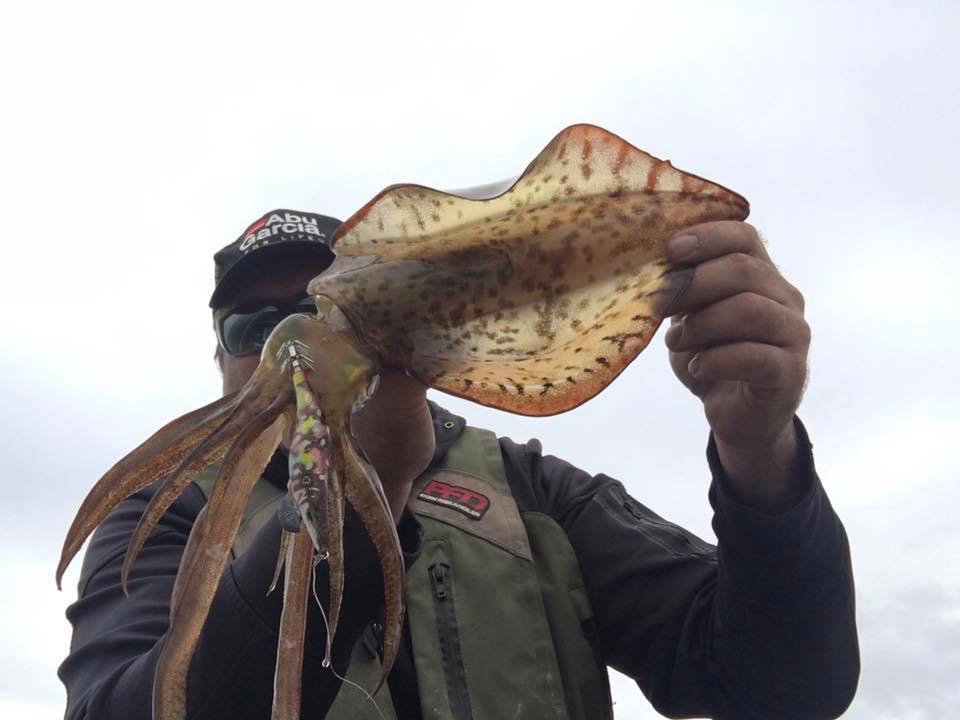 Last week Chris from Trelly's Geelong ventured out off St Leonard's and found some chunky whiting on the bite. Chris noted that the last half of the run in tide was best. 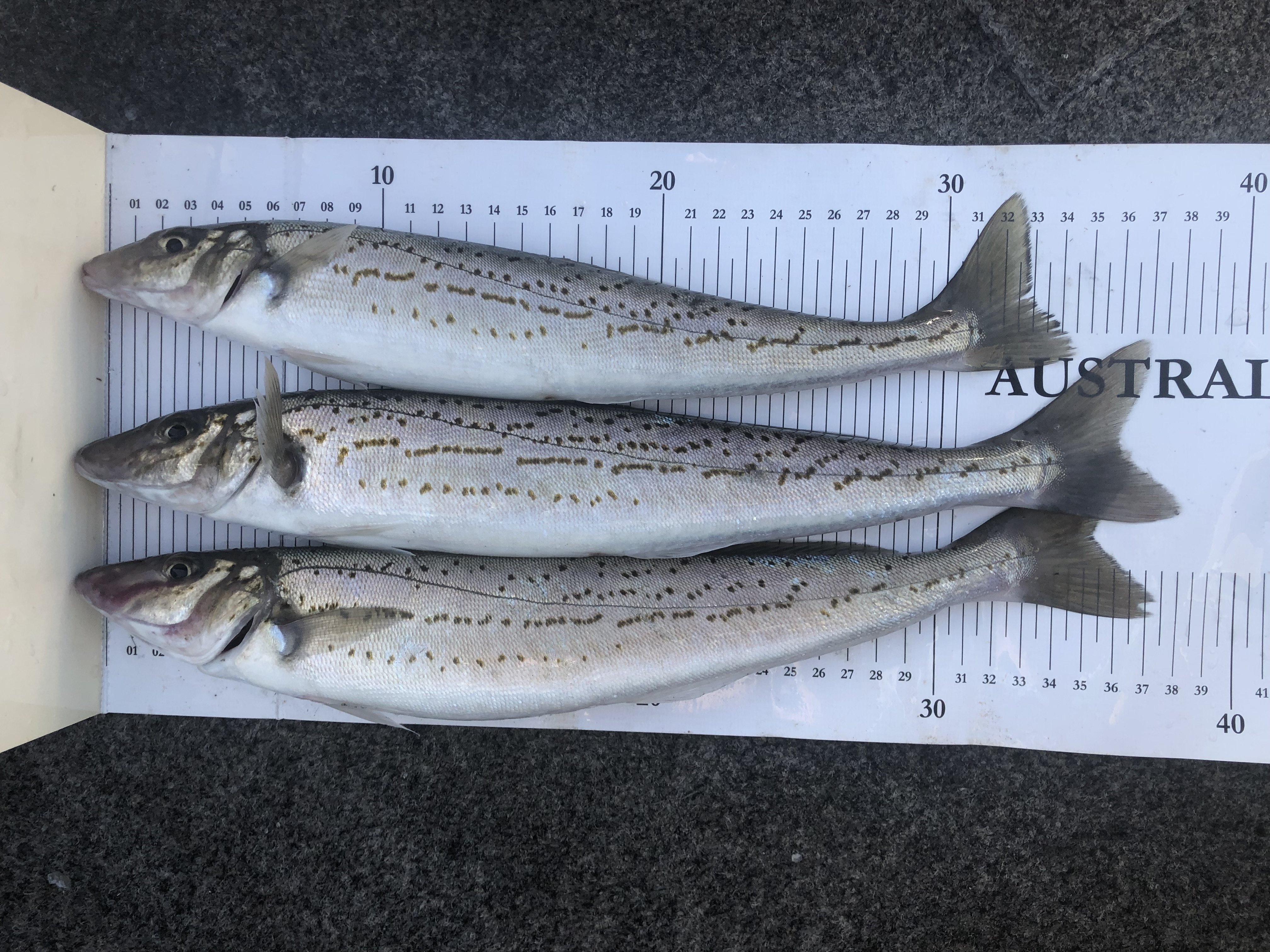 Those able to venture off shore this week can expect gummy sharks in 30-50 meters of water out from Barwon Heads. Fresh bait like salmon, slimy mackerel or squid is ideal with snapper to 3kg a likely by-catch.

Wurdibuloc reservoir has been fishing well of late for big redfin to 47cm. despite the current low water level, anglers casting metal lures like the norries wasabi spoon are able to cast into the deeper water and find the fish. Early mornings are best with the odd trout capture being reported too, the trout fishing should only continue to get better from now on as this the month of May in recent years has produced brown trout to over 8lb for keen anglers casting lures right on first light.

The River has dropped a little and slowed, it is quite clear and at about 16 deg above the Weir, we are still getting reports of some small Cod being caught on Cheese and Bardi Grubs near Mitchellstown Bridge and good numbers of Yellowbelly in the backwaters and creeks on Worms. Some Redfin and Yellowbelly around Kirwans Bridge on Worms, Small Yabbies and 3 to 4 inch Plastics bobbing around the Willow Trees and make sure you move after 15 mins or so until you find some fish. Below the Weir from Murchison East to Arcadia looks great, clear and isn't flowing too hard, plenty of smaller Cod on Baits such as Scrubworms, Bardi Grubs and Cheese, as the River drops a bit more, Lure fishing will only get better, Surface Lures, Spinnerbaits and Divers will be your best shot at the bigger Cod over the next few months. Some good Cod being caught around Bunbartha and the Undera areas, mainly on Cheese and Bardi Grubs.

Waranga Basin and outlet channels Main Western, 7, 8, and 9 all still have a Blue Green Algae warning current, so not much going on there, try Green Lake at Corop for your feed of Redfin, troll small Divers, find the fish, then bob Ice Jigs and Soft Plastics on the school. Victoria Lake in Shepparton CBD has been stocked with good numbers of  Trout for the school holidays, 2 bits of Powerbait under a float around the Western side of the lake the best method and spots to try with the Kids. Some good sized Yellowbelly in the Kialla Lakes on ZX 40's, colour doesn't seem to be important. Still some nice sized Cod in The Main Eastern Channel more towards Pine Lodge and mainly on Cheese, Big Yabbies and Bardi Grubs.

Over the last few weeks Lake Eildon has gone down a consumable amount, there is no longer any water under the Bonnie Doon bridge as the percentage sits around 39%. However The lake has still been fishing quite well, there has been a number of meter plus Cod being caught right up the Jamieson Arm on Yabbies and Cheese in some deep holes, their also popping up around the lake on the troll around the wall, in the Goulburn Arm and up Big River with the lures of choice being Bassman Spinnerbaits in the Red, Green, Purple and Pink colours on the troll along with Stumpjumper deep divers in colours like the Elton John. Yellow belly and Redfin are being caught around the trees on Yabbies and Scrubbies, RMG hard bodies and Gulp soft plastics are also working well either jigging or trolling.
That’s all for the last few weeks,
Cheers Colby Croxford-Demasi 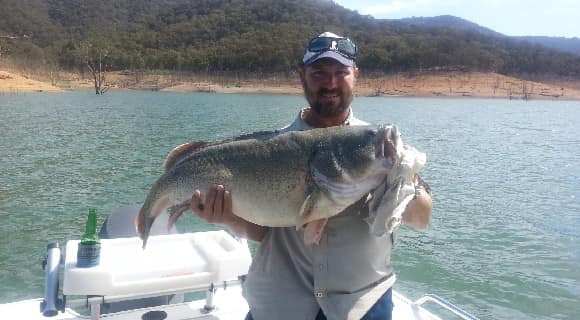 The Murray River has been the standout, and now the River is starting to drop, it will only get better, Big Surface Lures such as the Big Kingfisher, Coddogs and Zerek Stalkers for the big fish, and Pompadours and Codger Surface lures working well for the Medium Size Cod. The Cod have been taking Surface Lures early morning and late afternoon, but there has been some metre fish off the top during the middle of the day, so I guess, just give it a go and your in with a chance. Some big fish have been caught on Bait also, Mini Dim Sims, Chicken, Bardi Grubs and Cheese all getting meter fish over the last week. Lake Mulwala is fishing really well also, Clayton form Coddog Lures is still getting Meter fish on his Surface Lures, and we have heard of some really big fish on Swimbaits also. 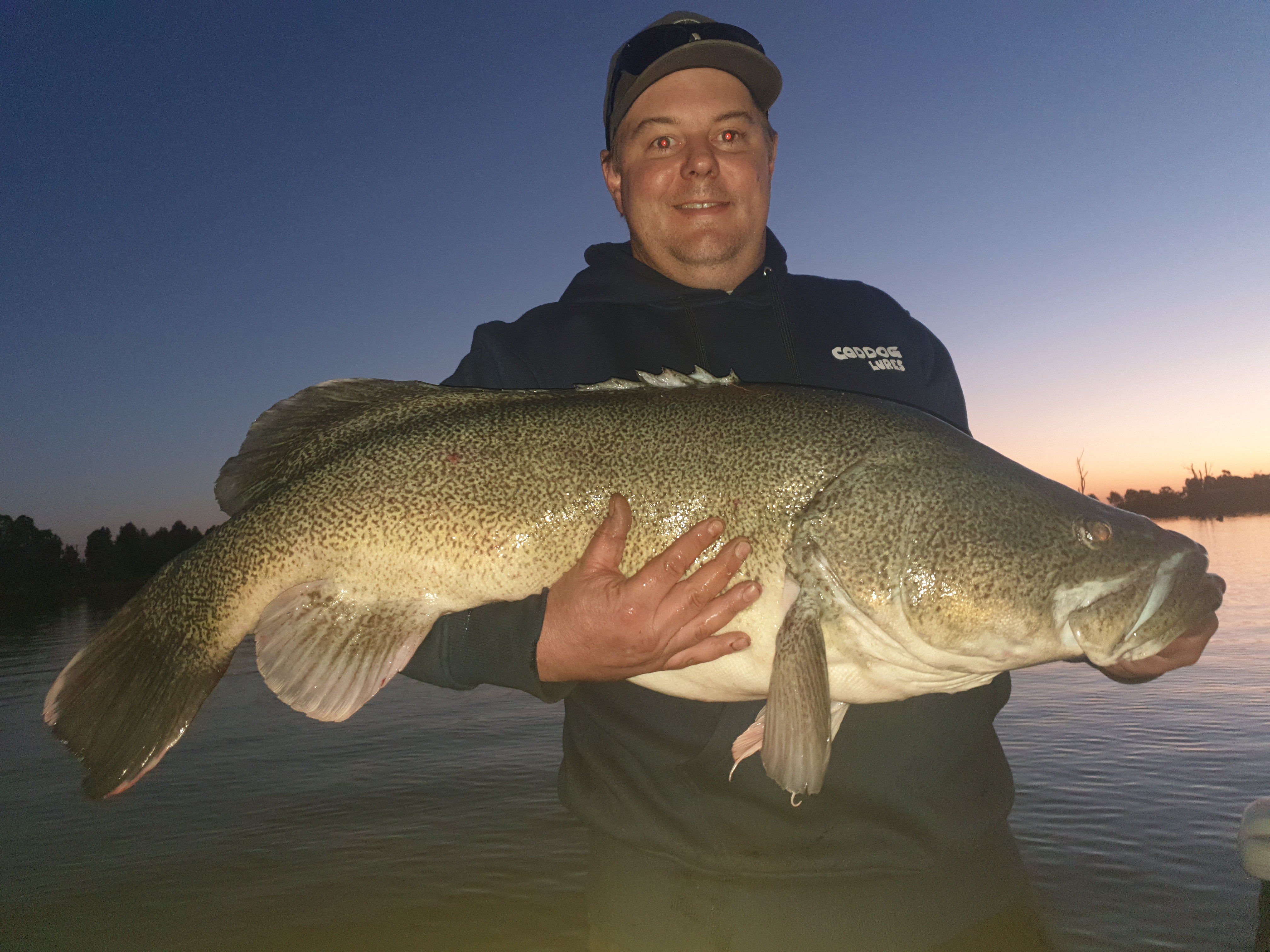 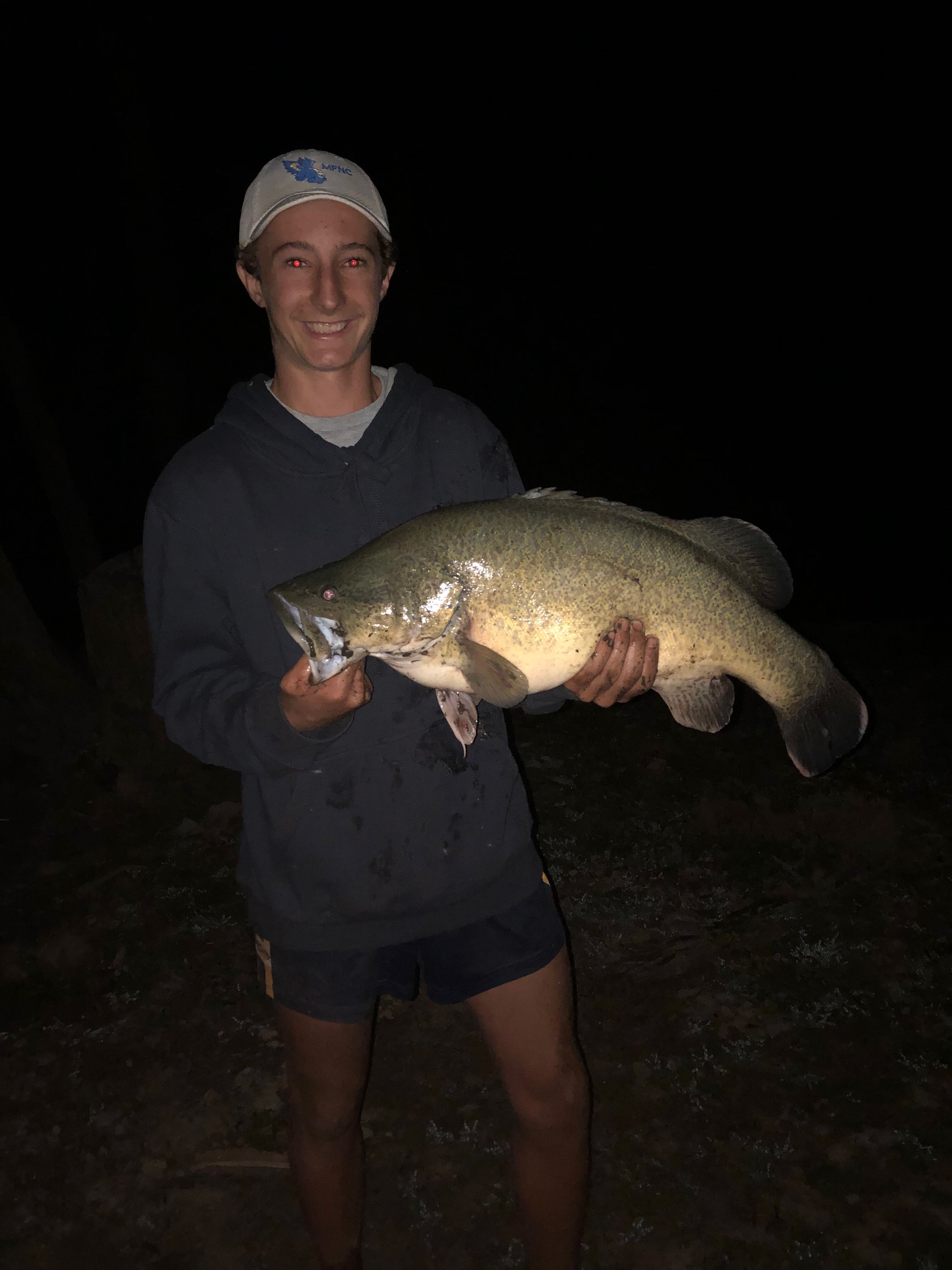