The kingfish action has only become hotter since last week with off shore and in the RIP producing fish. Sam Pitman and Jimmy Syrigos fished out off Ocean Grove with 150gram knife jigs in 30 meters of water for a kingfish each at 80cm and another one lost at the boat. Fishing in the RIP saw big kingfish caught by those using live bait like slimy mackerel and squid, even trolling live slimys dropped down on a down rigger saw big fish brought up from the depths. 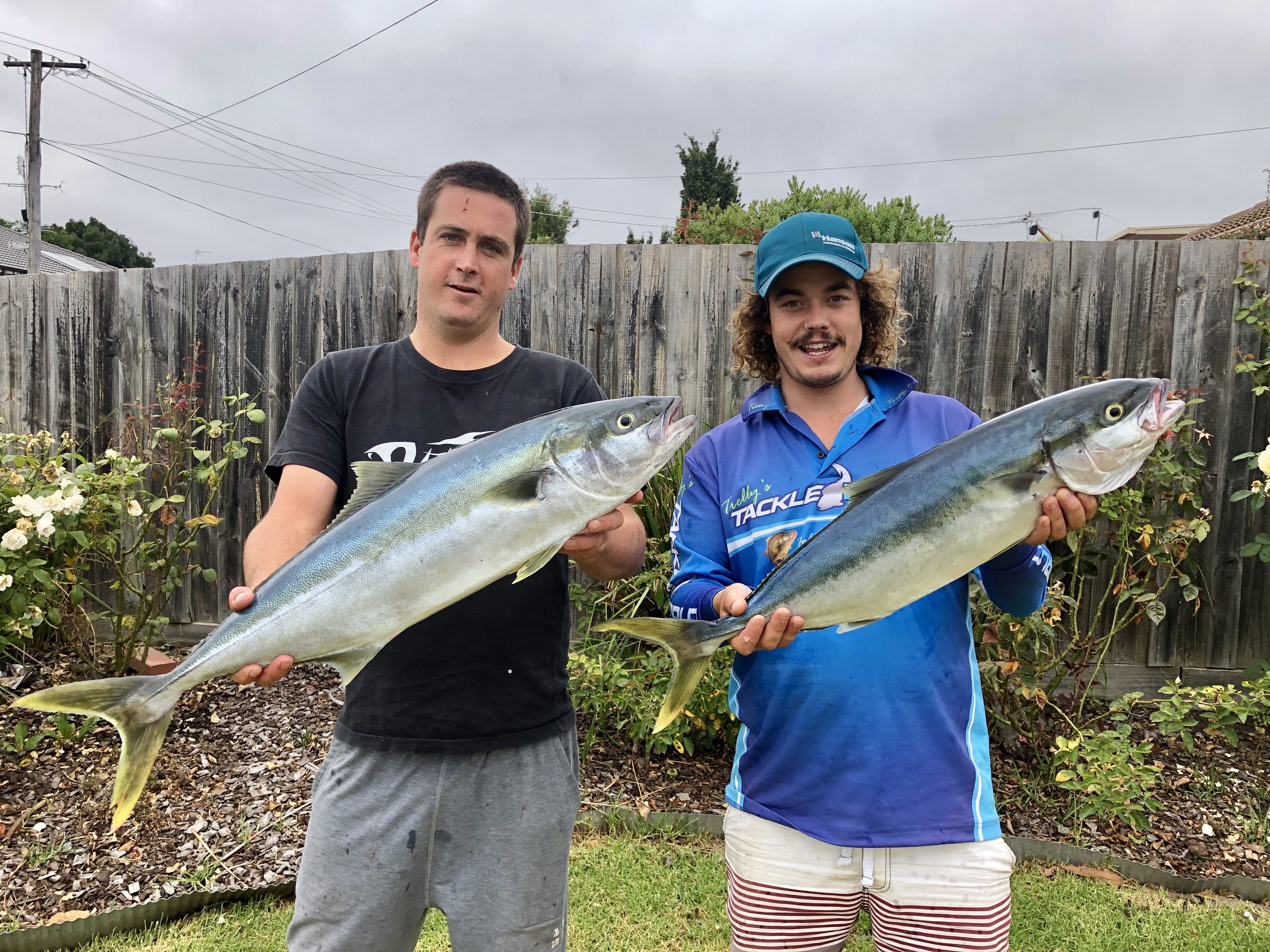 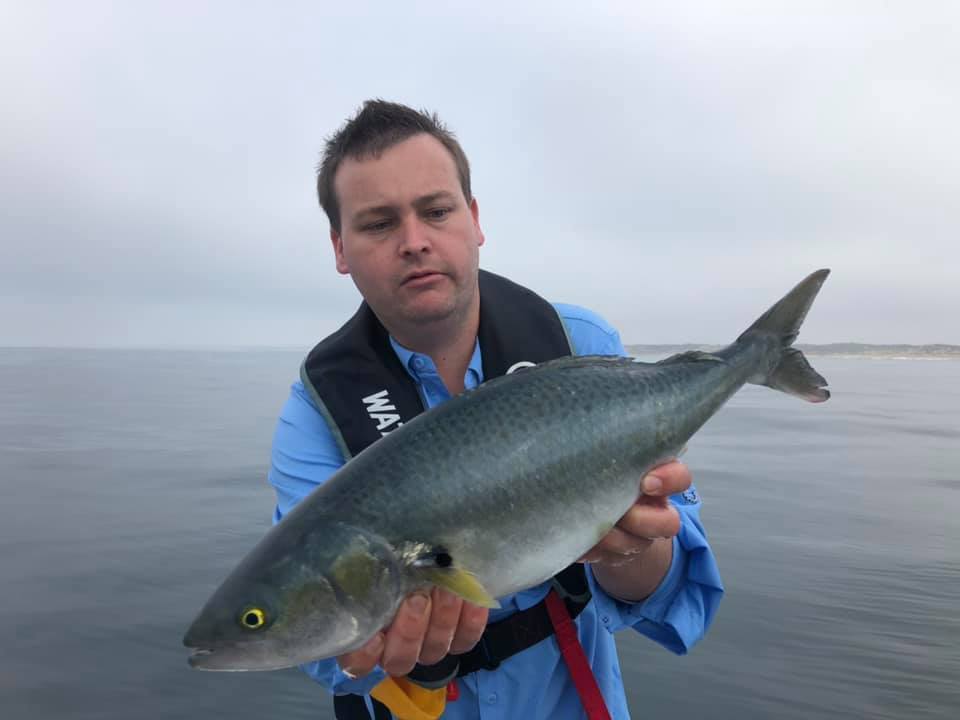 Whiting are on the bite at St.Leonards in around 4-6 meters of water, fishing the middle of a moving tide was most productive with pippies the stand out bait. Some moving may be required to find the fish but once found you can expect a good bag of fish to around mid 30cm. Clifton Springs also fished well for whiting with water from 3.5 to 7meters holding fish, from all reports this area is holding bigger fish to around the high 30cm mark.

The Grammar School Lagoon has seen quality flathead landed with some around 60cm, fishing the deeper water or the edge of the channel on the bottom with bluebait or soft plastics is effective with the possible bycatch of pinkies and pike. Land based anglers chasing a flathead should try the St.Helens boat ramp rocks or the North Shore rocks.

The calm winds across the Bellarine Peninsula have allowed anglers to enjoy clean water to chase squid off any of the piers or jetties from Portarlington to St.Leonards, casting jigs from size 3-3.5 in a white or green colour produced best results. 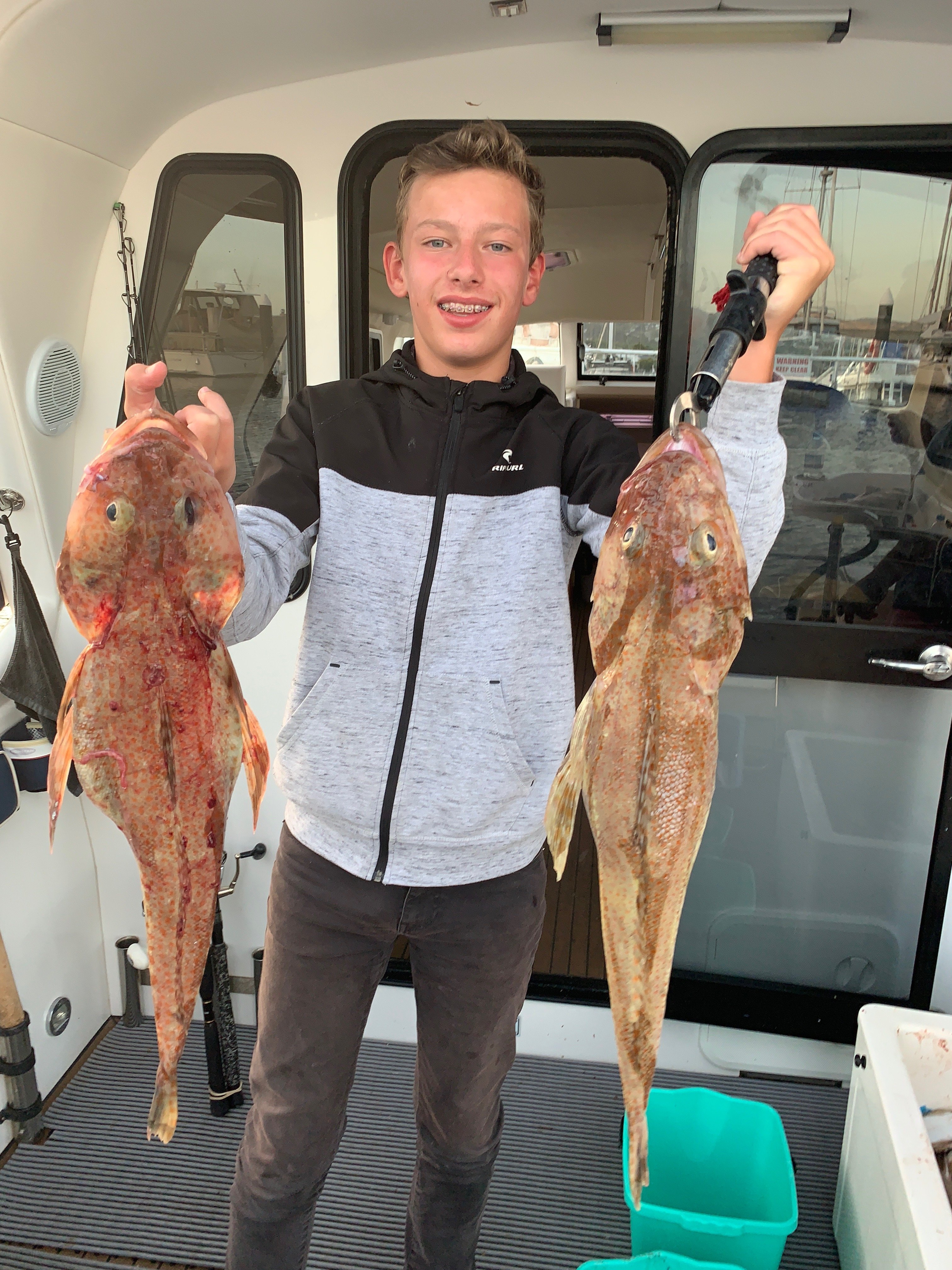 Trout at Lake Purrumbete have been caught by anglers fishing deep with down riggers or fishing mudeye close to the weeds edge on first or last light. Redfin are still in huge numbers and will respond well to soft plastics or worms and can save the day if the trout won’t play ball.

Now is a good time to take advantage of the Barwon River’s clean conditions from Queens Park to Breakwater, Carp are being caught on sweet corn and bread with redfin will take a worm or small diving lure.

Now we have got over Christmas and New Years, finally some time to let everyone know what's been going on, and it has been great, plenty of fish being caught in most parts of the Goulburn River, Cod on Divers around Trawool, some Yellowbelly and Cod around the Seymour township, baits such as Bardi Grubs, Cheese and Worms doing the most damage and the River below the 2 pubs is worth a try. Closer to Nagambie and things a really starting to heat up, Nagambie young gun Hugo (pic) and his mates are catching plenty of Cod, this is a report Hugo sent me,

We have had a cracking start to the new year with another fantastic session on the Murray Cod, Landing 18 fish from 4:00pm onwards. Cheese was truly the stand out bait, catching multiple 60cm plus Cod. Also in the same session, a few of my mates and myself went out in the boat, just on dark and caught one off the surface on a Pompadour. It’s good to see the fish are very active at the moment. Cheers Hugo.

Below the Weir has been great also, everywhere from Murchison East through Toolamba, past Shepparton to Undera is all great, bait has without doubt been the standout, maybe with the River flow at the moment being a little high and fast, bait fishing is a little easier? but Cheese, Bardi Grubs, Shrimp, Yabbies and Scrubworms are all working really well, Pro Staffer Graeme has been getting up to 30 fish in a session around Arcadia, mostly on bait, but the 1 lure he has had success on, are the Old Mate Divers.

Waranga Basin is interesting, we are getting lots of mixed reports, some fisho's smashing it and some donuts from others? I guess the one thing common in the Fisho's catching the Redfin at the moment, is good Sounders, they are not wetting a line until they sound up fish, once they find the fish, bobbing Worms, Yabbies, Ice Jigs and Plastics all working well, even with people swimming around the boat at the same time! The fish seem to be bigger with Redfin over 40cm not uncommon, we did hear of a fisho not having any luck on the Redfin, but found a patch of Yellowbelly and ended up leaving them biting just before a storm a week or so ago. The Channels are all fishing good, Worms and small Yabbies working well in most of the Mains, number 6 from Kiota Road through to Lancaster is probably the standout with nice sized Redfin and the occasional Yellowbelly and Cod being caught.
Austin Laurie (pic) from Rochester has been catching plenty of Cod and Yellowbelly on Bassman Spinnerbaits in the Campaspe River around Rochester in his Kayak.

The Main Eastern Channel along the Shepparton Euroa Road has been a bit of a standout over the last few weeks, baits such as Cheese, Bardi Grubs and Yabbies working well on Cod, and Bassman Spinnerbaits working well for both Cod and Yellowbelly, its a great place to get the Kids their first Cod, easy access, and limited snags and most fisho's are getting some fish most sessions, which gives them a great chance.

The Murray is Fishing quite well, already this season, there has been lots of 1 meter plus Cod caught on a mixture of Bait and Lures. Clayton form Coddog lures (pic) getting a 118cm on a Coddog surface lure and they followed it up with a 120cm on a diver a week later in Mulwala. Most places from Echuca to Yarrawonga are producing fish, so definitely worth a trip up to the Murray, Liam (pic) and I fished Mulwala, Majors Creek side, getting a couple of 55cm models on the Bassman Codman Series, Chartreuse/Orange colour Spinnerbait, the main thing was dodging the Boat/Jetski Traffic, great fun!