Corio bay inner harbour was again host to some fantastic fishing. This past week saw tailor make an appearance, they were caught by a number of anglers targeting Australian salmon that are currently in great numbers right across the western beach, waterfront and Eastern beach area. Both species will respond well to bait fish imitation soft plastics or a metal casting lure. Still in close and pinkie are still abundant with some pushing 60cm. Soft plastics fished deep has been the preferred method with bait anglers using blue bait and pilchard also snagging their share. Chris snagged himself plenty of Australian Salmon around the 1kg mark Sunday afternoon. 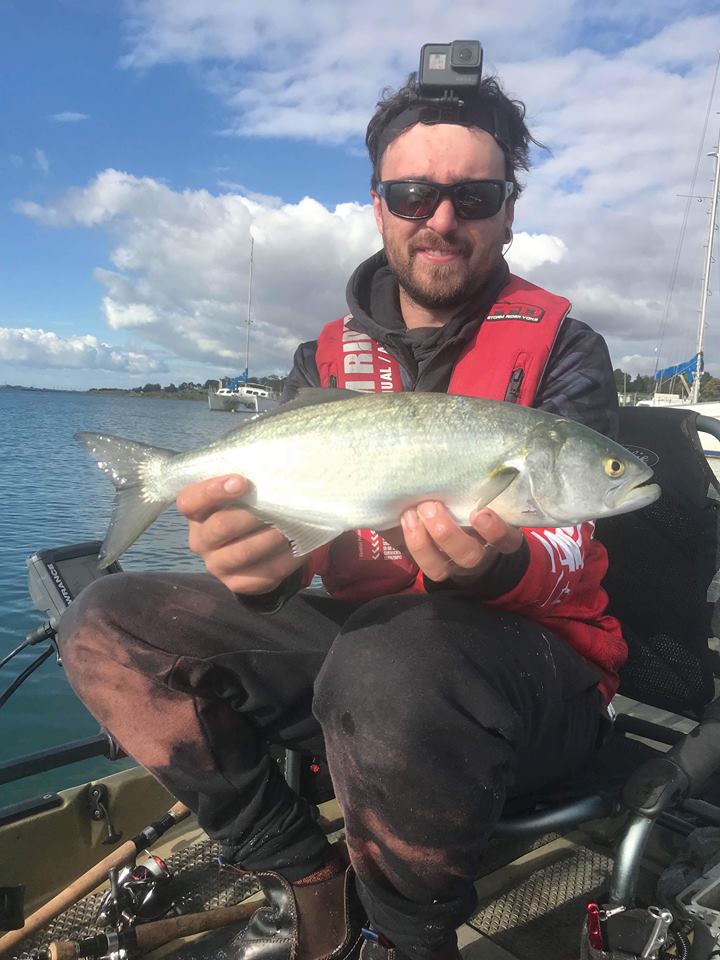 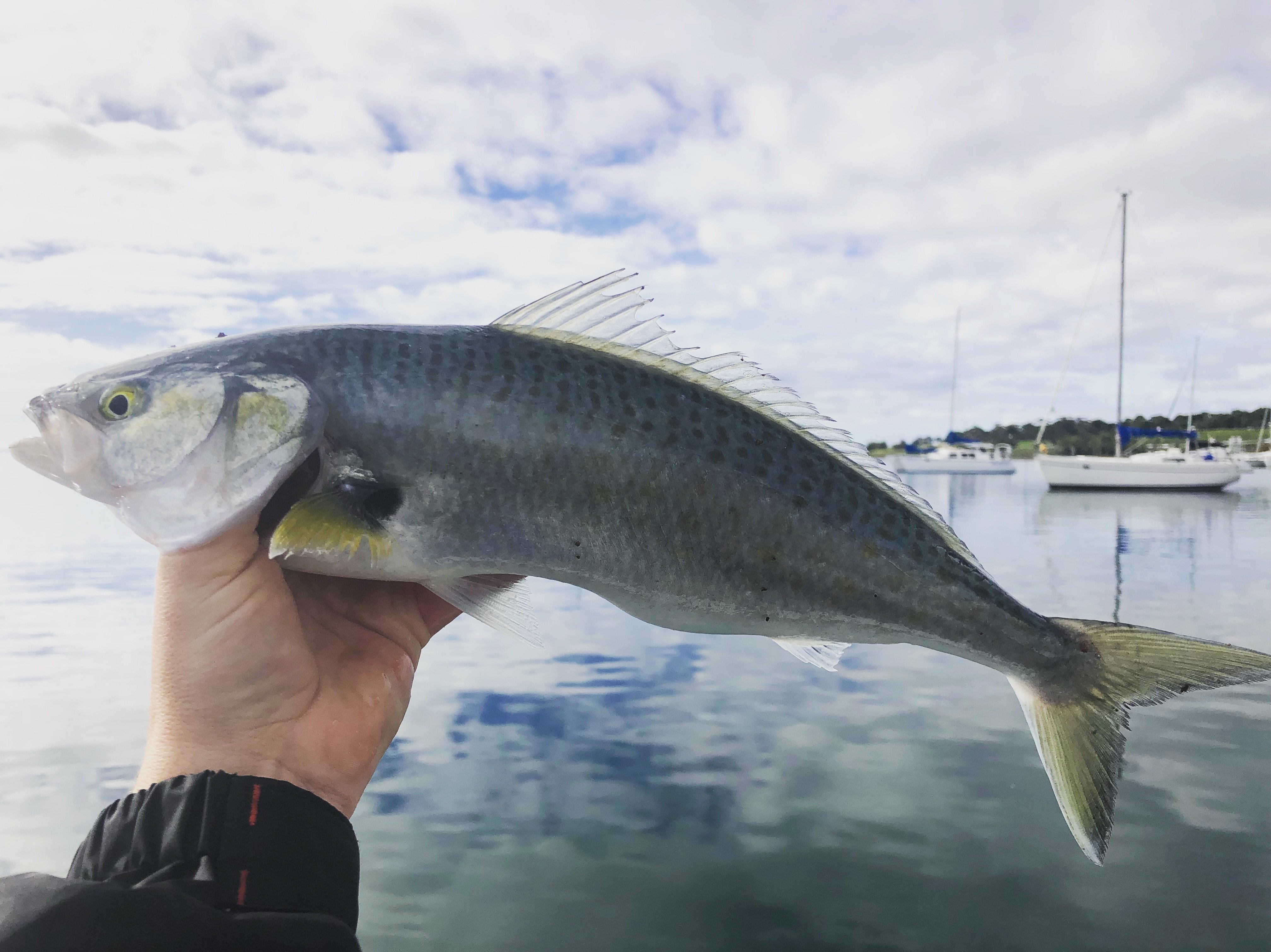 The garfish action has fired up in the bay with many anglers bagging out on big gars, a good burley trail is a must for keeping the schools of fish in your area and if you’re restricted to bank fishing then try your luck at St.Helens or Limeburners boat ramp.

Out off Clifton springs has seen the whiting fishing improve on the last few weeks with some good reports of fish taken on pippie and squid bait, the action seems to be also present at St.Leonards and Queenscliff with squid to be caught too at the same locations.

Fishing offshore between Barwon heads and Torquay has been fantastic of late for those chasing small snapper. 40-80 gram knife jigs and octo-jigs have resulted in some great captures in 30-50  meters of water, you’re also a good chance of some tiger flathead. Those using bait such as salmon or trevally fillet can expect gummy shark.

Pinkies are still being caught in large numbers behind the footy field in 4-7mtrs. A large variety of the 4-5 inch soft plastics in a variety of colours have been having  great results. Salmon have still been schooling in large numbers around Williamston. Fisherman having best success and most fun on metal lures ranging from 15-30grams and trolling a wide variety of hard body lures.

Pinkies are still present on the shallow reefs. Plenty of fish to size and those willing to put a bit of extra time will be rewarded with bigger specimens up to 2kg at time. Those using bait, the good ol’ pilly tail or cube lightly rigged is hard to pass. Those choosing to through lures, plastics are always fun. Berkley Gulp soft plastics are consistently reliable. Turtle back worms and 6” sand worms in red or camo are always a good starting point. Like everywhere in the bay, calamari are every present. All the shallow reef areas around Altona are producing. Red foil base jigs and darker colours have been good choices. Having said that, any jig in natural colour or colour you feel confident in will most probably work with the amount of calamari around.

Calamari have been caught in large numbers around the RAAF base pier aswel as Whiting in good numbers in the shallow water around the wedge spit. Fisherman are finding best results using berley, aswel as  strips of squid and  pippies  on 01-1/0 black magic kl hooks or whiting snatchers.

Tuna are still being caught when weather permits from Portland to Apollo bay with some reports even as close as Lorne. From all accounts the fish appear to be out near the shelf.

On to freshwater and lake Wurdibuloc has seen good trout caught on metal casting spoons, Sonnie Hovey landed a very nice brown trout while casting a paco spoon from the bank. Redfin of good size have also been caught in good numbers. 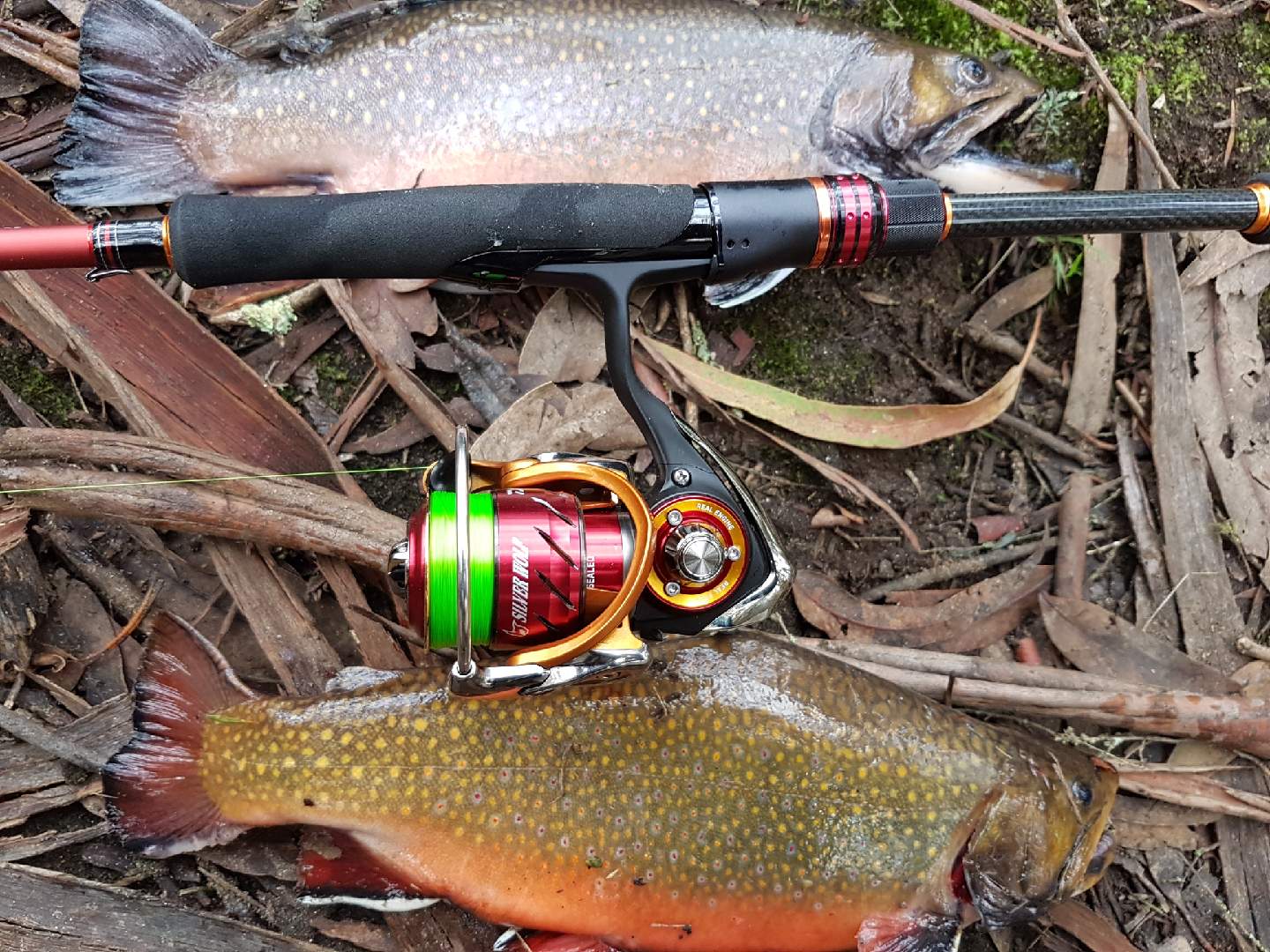 Those wanting to catch a trout in a stream or river will have until midnight on Monday 11th june as the season comes to a close.  The patchy rain and cooler conditions have really had a positive effect on the small Otway trout streams but we will only have this weekend to make the most of it. The fish are biting well and will happily attack any small shallow diving minnow lure in most of the rivers from Lorne around to Aire river.

As far as fishing Seymour to Kirwans Bridge at the moment, it's all about the Crays, plenty being caught around the deep water near the Wineries and along Northwood Road areas and around Chainman's Bridge and from the Nagambie Lake to the Weir. A few Redfin on small Yabbies and Worms for the Fisho's waiting to check their nets. The River below the Weir from Murchison to Shepparton looks really good, casting Spinnerbaits and Hardbodies as well as trolling working well for Cod and Yellowbelly, also some nice size Cod around 60 to 67cm on Scrubworms behind Aqua Moves in Shepparton, and some Nice Crays being caught also, standout area's have also been Murchison East, Cemetery Bend Old Toolamba, and Arcadia.

Still plenty of Redfin in Waranga Basin, trolling small RMG's and Size 3 Stumpjumpers, casing 3 to 4 inch Soft Plastics and bobbing Worms and Small Yabbies working the best, if you have a good sounder, trust it and search for the schools before fishing, try straight out in from of Harrimans Point and also along the wall. Most of the channels have been really hard work, plenty of Carp for the kids to have fun, but otherwise very slow, some Crays in the bigger Channels that have water in them, try dropping some nets off the bridges in the main channel along McEwen Road. Still some small Trout being caught on both Fly and Rooster Tail Spinners and also Powerbait under a float around the Western/River side of the Lake.

Lake Mulwala is starting to become very hard to launch, before the recent drop in the last week, Fisho's have been getting most of the bigger Cod over near the wall in the shallower water using Swimbaits and Surface Lures. Steve (Trelly) had a great day with James from Balista Lures in Mulwala about a 45 minute run up the River from the Yacht Club catching plenty of Cod mainly on the Balista Juggernaut 90's. The River below the Weir has been fishing really well, mainly from Cobram to Tocumwal, plenty of bigger Cod around the 80 to 90cm with the occasional 1 metre plus model with them, Two of the Highlight fish over the last week according to Sam fro Cobram Outdoors was the 134cm Cod caught casting a Size 1 Stumpjumper and a 121cm Trolling also, Sam also mentioned the both the Big and Standard Old Mate Lures have been working really well. The fishing from Beari to Echuca has been a little hit and miss, you may spend a day working hard for donuts, then get 2 big fish the next, trick is to just spend the time and have 1 million casts! Bait fishing throughout the Rive seems to be quiet for Cod, have only heard of 1 fish caught on a hotdog, but quite a few Yellowbelly have been caught on Worms and Yabbies. 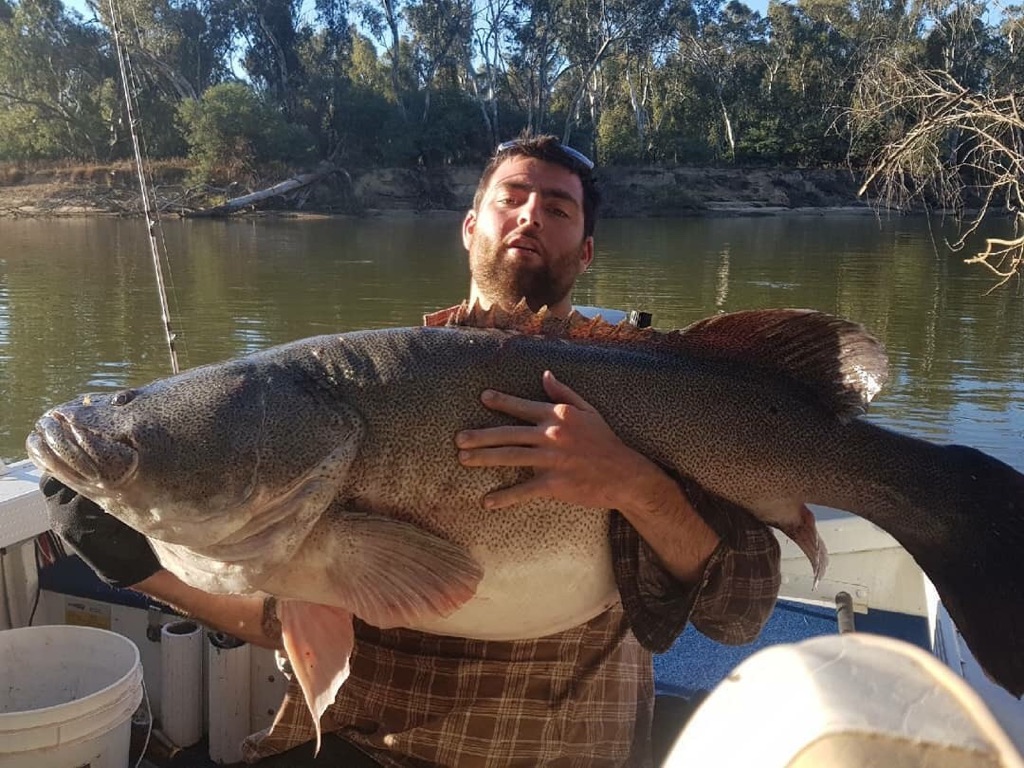 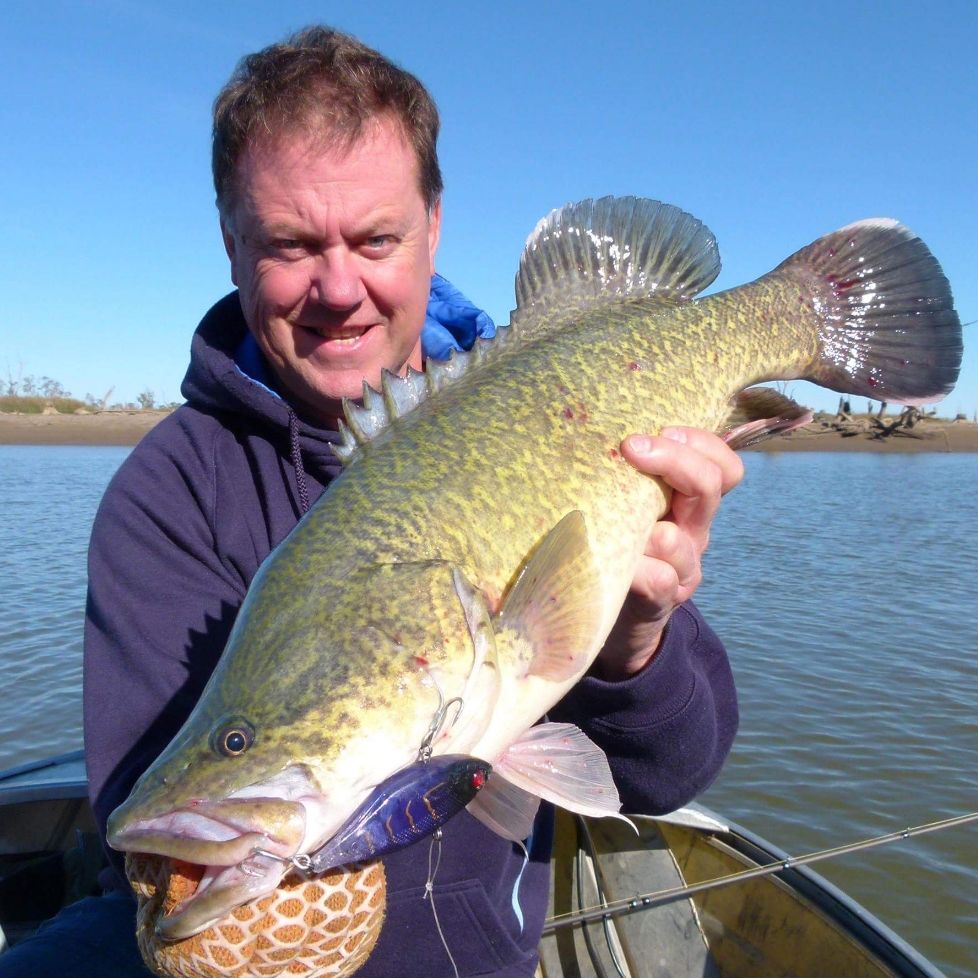