Starting offshore this week and anglers were greeted with mostly calm conditions. The thirty meter mark out from Ocean Grove / Barwon Heads was loaded with gummy shark to 15kg. Fresh Australian Salmon on a flasher rig work best. There is also still plenty of surface commotion going on too Australian Salmon erupting in a surface frenzy, along with the odd school of Bluefin tuna still lurking around. Trelly’s Geelong’s Peri Stravropoulos got stuck into any number of pinkie snapper to 50cm out from Barwon Heads last week along with a blue devil fish which was released. 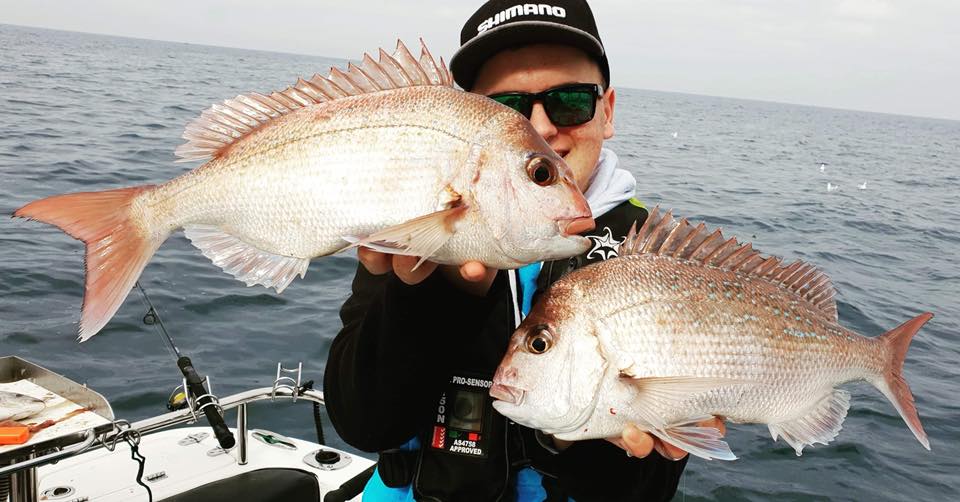 The beaches from Point Lonsdale to Bancoora are also taking part in the Australian Salmon action with blue bait on a paternoster rig working well. Casting metal lures is another sure tactic and has been very successful on a run in tide. Of a night gummy shark have been a common capture with fresh fish fillets the best baits.

Inside the Corio Bay a wide variety of species are on offer with squid, whiting, salmon, pinkies, flathead and even the odd report of an elephant fish. Soft plastic anglers snagged pinkies, flathead and Australian Salmon from around the moored yachts along Western Beach. Gulp turtleback worms and 3” minnow on a 1/8oz jig head did the trick nicely. Limeburner’s boat ramp was a land based hot spot with garfish in excellent numbers and responding well to silver fish under a lightly weighted float.

Clifton Springs was squid central size three jigs allowed to sink almost to the bottom resulted in bag limit captures. Whiting held over the Curlewis Bank in six meters of water. Snapper made an appearance with anglers finding the odd larger fish along the Point Richards Channel. Jimmy boated a huge Clifton Springs squid during the week. 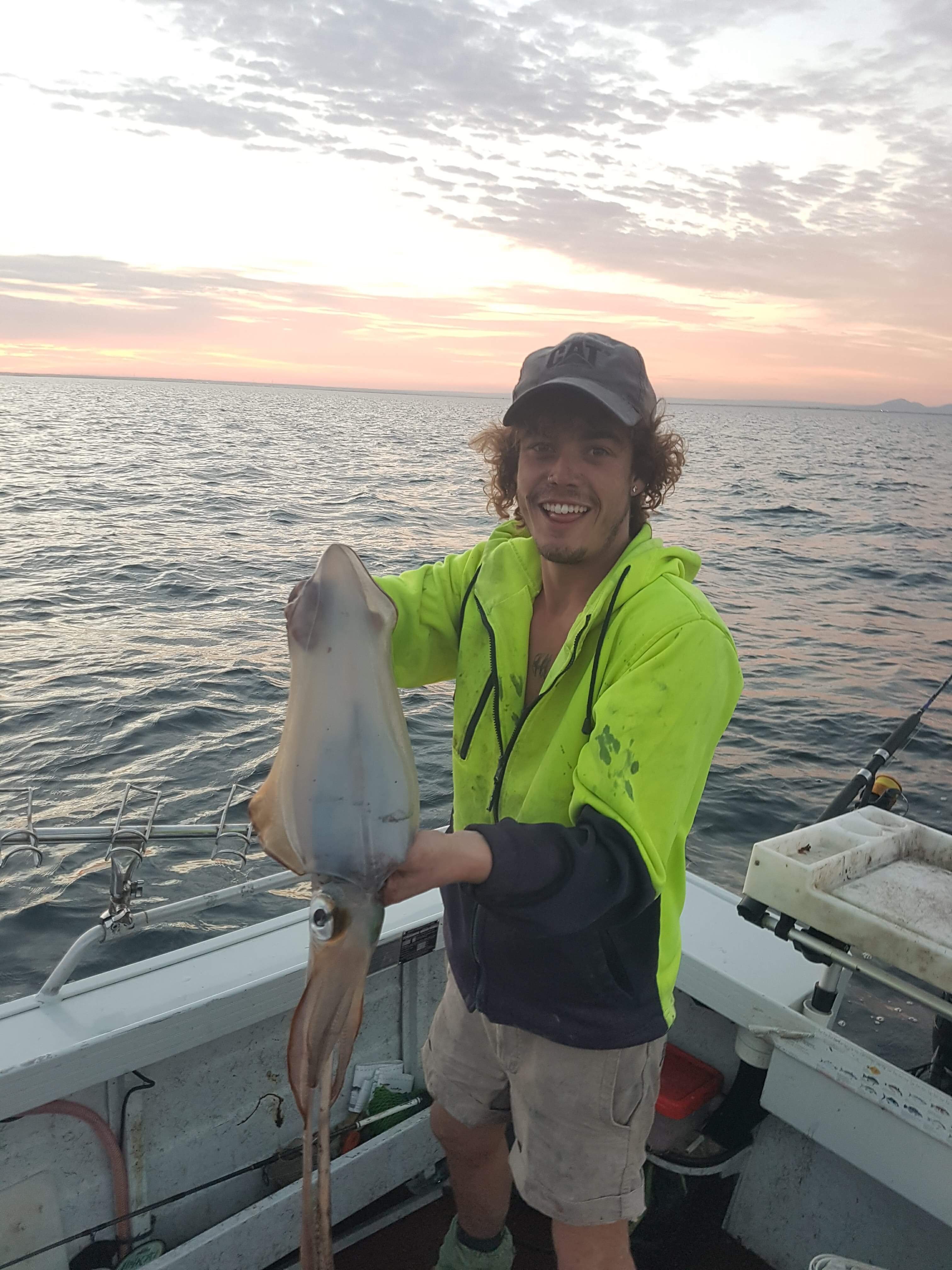 Inside the Barwon Estuary elephant fish were on the chew with a liking for squid rigged on a running sinker rig. Plenty of smaller model Australian Salmon kept anglers busy. Bream in the upper reaches of sheepwash were snapping up live bass yabbies.

Peri & Adam ventured west during the week snagging some awesome bluefin tuna that were in incredible numbers. Peri mentioned that the tuna were keen on devouring Sea Iron pelacus lures and Bassday Bungy casts. 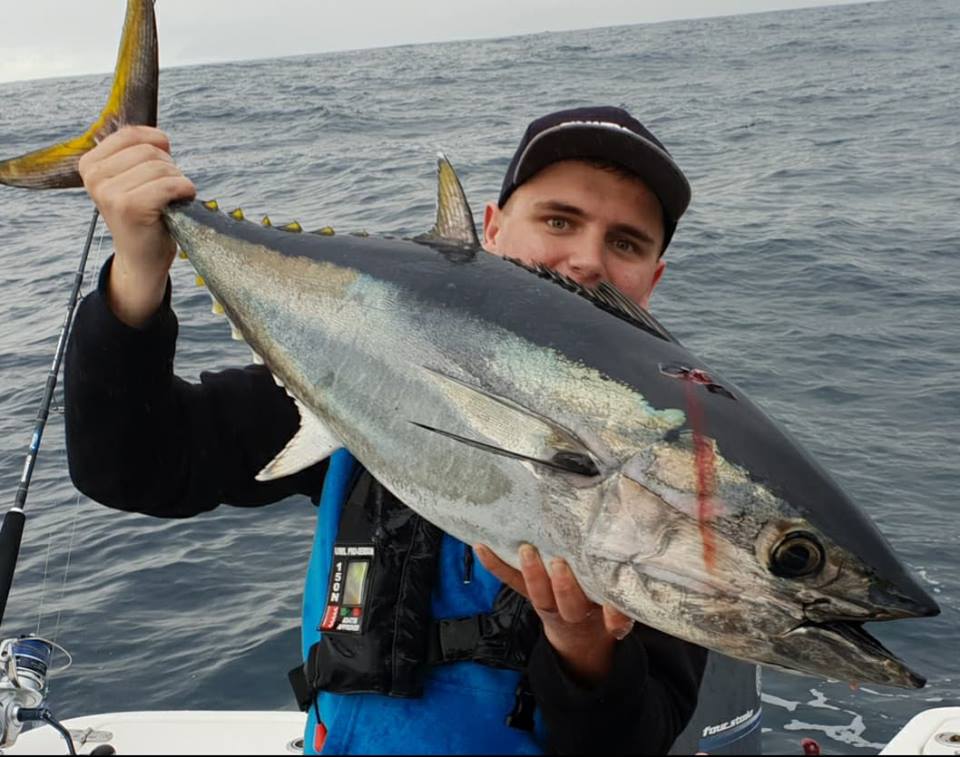 Michael Evans from Victorian Inland Charters South West along with Tim Beusmans caught some trophy estuary perch from the Hopkins River during the week. 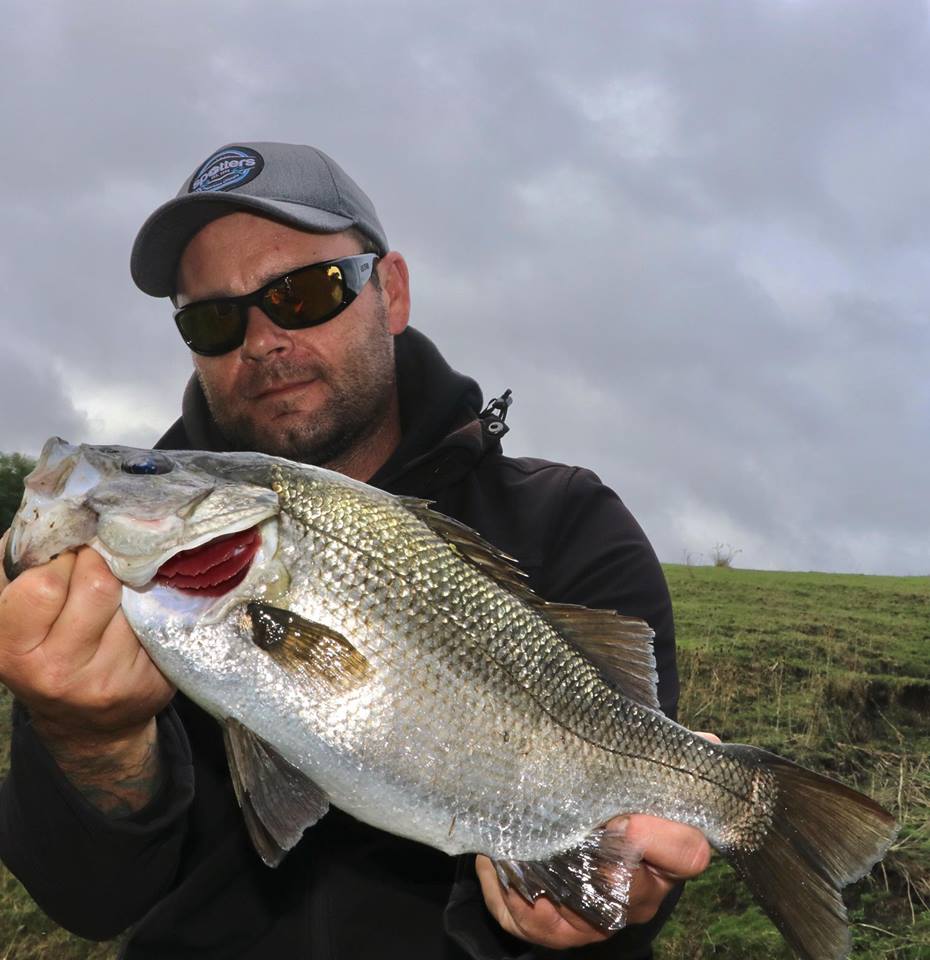 The freshwater scene saw Lake Purrumbete give up the odd large brown trout to almost 10lb along with large numbers of redfin. Trolling tassie devils down about 10 meters during the day is ideal at present but as the weather continues to cool flat line trolling all day will work fine.

Wurdee Boluc was constant for redfin to 35cm and at times saw trout of just over 1kg take pegron tiger minnows cast from the main rock wall.

The River from Seymour to Nagambie has slowed a little, the result is a few Cod have starting biting again, I witnessed around a 90cm Cod caught and released at Mitchellstown Bridge over the weekend, caught on Cheese, the fish was in amazing condition showing the state of the River in this region, fishing is only going to get better every year, with the depth in this area, big deep hardbodies such as AC Invaders, Coddog's and White Crow's all working well, greens, whites, purples and red's have been the standout colours. Casting 5/8oz or 1oz Spinnerbaits and Mumblers in white, purple or orange, letting them sink down deep along the bank and SLOW rolling them back in working well also. Bait fishing the middle of the day with Cheese, Scrubworms, Yabbies and Shrimp working well also. If surface and swimbait fishing is what your after, try the Kirwans Bridge area, fish the Willow Trees, and keep moving until you find the fish, bobbing black or white softy plastics in the same area's will give you a good chance of  Yellowbelly and Redfin. Below the Weir from Murchison, Toolamba, Shepparton and Undera looks really good, plenty of Cod being caught, most fish are arouind the 45 to 55cm, but you will get a good sized 55 plus most sessions if you put the time in. The River has dropped a little and is quite clear, so Hardbodies (Old Mate's and Codgers), Spinnerbaits (4D and Pirate)and Surface Lures (Codger) are all working well. We have heard of a few Yellowbelly on Spinnerbaits, but not the same numbers as last year.

Waranga Basin is still producing big numbers of Redfin, although I'm still getting reports all the usual methods are still working, RMG Poltergiest's, Size 2 or 3 Stumpjumpers and Squidgy Slickrigs drop bear colour and 3" white grubs, I have had some customers saying the only thing they have had success with is the Powerbait 3" Gotham Shad in Native Brown colour, so will pay to have a little variety. Lake Victoria in Shepparton CBD is fishing really well, plenty of Trout, Fly fishing or Powerbait under a float the best method, small vibes and soft plastics resulting in some nice sized Redfin, and small surface lures such as Halco Nightwalkers have been getting some small Cod, the best area is from the boat ramp at the North end of the lake, all the way along the Western side to the other ramp, If you have a Kayak, stick to the middle and get away from the weed.

Still getting great results from the Murray, after visting our Shepparton Store, Andrew White left with a Coddog Surface Lure, Purple with a Pink Butt, landing an impressive 112cm Horse of a Cod, we are constantly getting these stories in store, most fisho's are getting a shot at a metre plus fish every session and anywhere from Beari to Yarrawonga, Mulwala to Bunderlong. Divers such as Codgers, Old Mates, Coddogs and White Crows are all working well also, Green and Red are the standout colours. Kel Williams and Graeme Saunders had a great weekend at Mulwala landing heaps of Cod, best method was casting Codger Currawongs and 2 or 3 quick winds to get it down a little, then SLOW, as SLOW as you can wind back in. The other standout lure was the Jackal Doozer, basically cast to the structure and the SLOWEST retrieval you can do. I guess what I'm saying is whatever lure you are using in Mulwala or the Murray at the moment, the longest you can keep it in the structure by the slowest retrieval possible and jerk and flick and roll whatever it is your using, the better the results will be. Hope this helps! 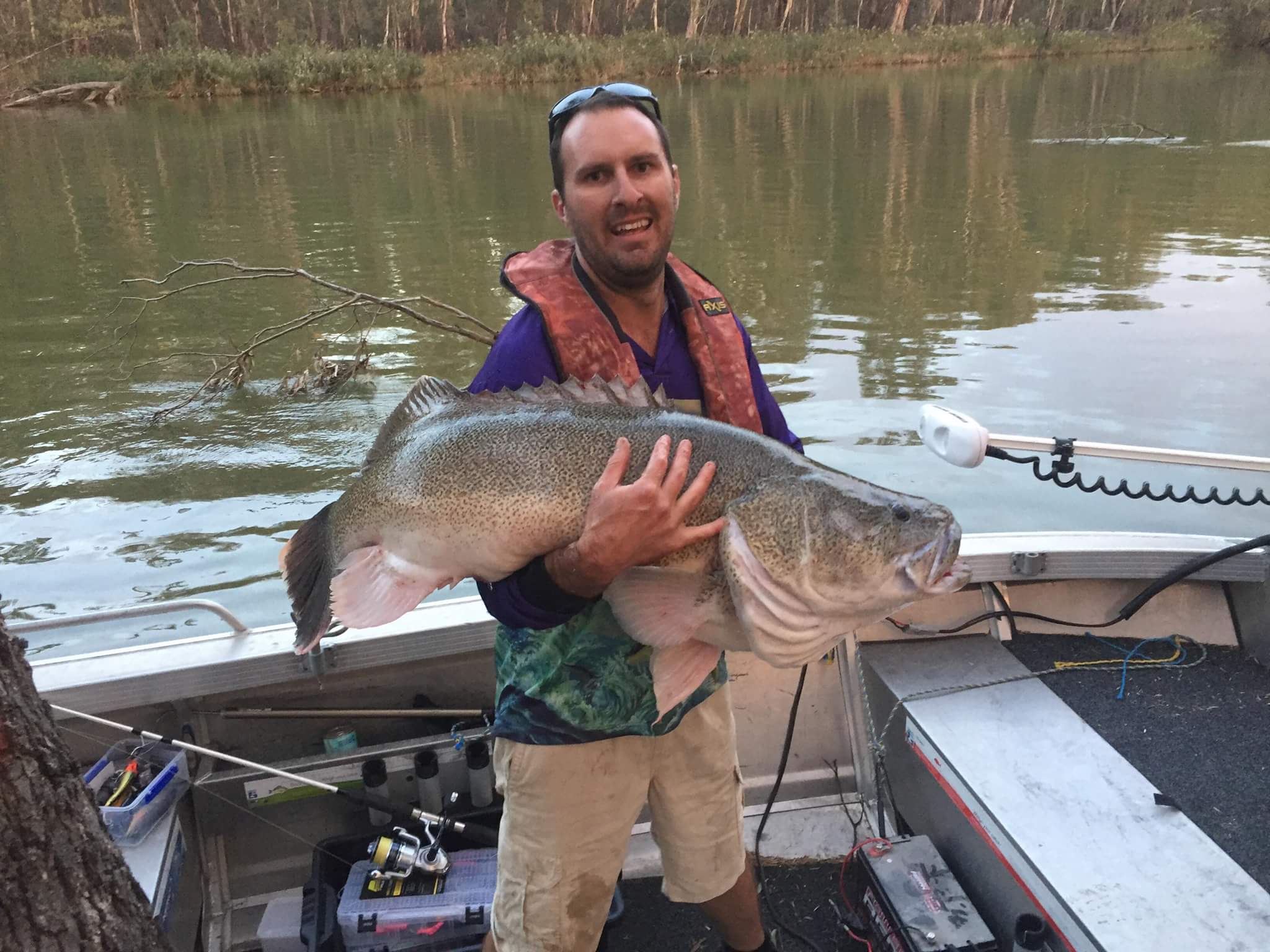 Shepparton Shop regular Jason (Jacko) Varcoe has had a great trip to Port Macdonnell, weather was a bit rough, but they managed plenty of Bluefin Tuna averaging 15kg, Crays and some nice Blue Eyed Trevally 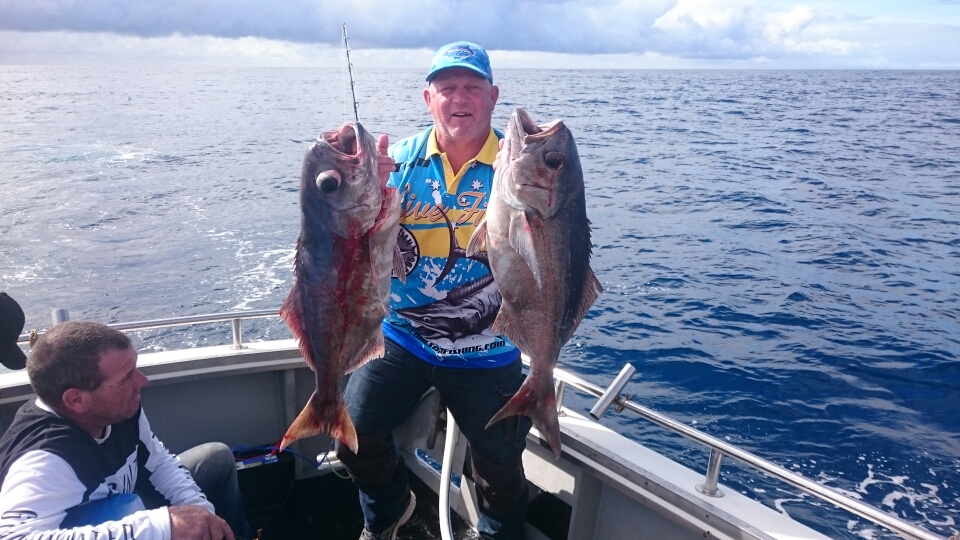