Corio Bay was one of those locations offering some protection and the rocks from St Helens saw plenty of pinkie snapper along with flathead come to blue bait fished on a paternoster rig. There was also the odd report of elephant fish from St Helens. Over at Limeburners garfish were still responding well to a strong berley trail from the rocks. A light float rig with a size 12 longshank hook was a perfect rig when baited with small baits like pippie or silver fish. Casting soft plastics from the boat saw plenty of action for anglers chasing pinkie snapper. The outer wall of the Geelong Yacht club along with the Western Beach mooring areas were definite hot spots.

Heading down the Peninsular and just out from Point Richards boat ramp in six meters of water was ideal for King George whiting of an evening.  Even towards the edge of the mussel beds for a productive location for a few whiting along with a by catch of pinkie snapper and flathead.

Over at Swan Bay, the channel offered some protection from the winds and on the run in tide silver trevally and whiting kept anglers busy.

Queenscliff saw some awesome squid fishing from the main pier along with Bell Reef. Again larger 3.5 sized jigs worked best. Out in the RIP the kingfish are still hanging around and are on average a much better size. Drifting with fresh squid baits our even down rigging them is the way to go. Kingfish to over 10kg are not uncommon.

Offshore was a challenge with the weather but when able to sneak out gummy shark were in fantastic numbers. Large baits like fresh Australian salmon worked a treat on gummy shark to 15kg. There is plenty of schools of surface feeding Australian Salmon which make for great sport or fresh bait supply.

Freshwater reports slowed, with some of the best fishing coming from Lake Purrumbete as the redfin were in large numbers and responded well to a soft plastics jig in front of the school.

Stony Creek was consistent for brown trout to 1kg with pink #55 13.5 gram tassie devil the most effective lure.


Last Sunday a celebration day was held at the Leopold angling and aquatic club for the ending of netting in Corio Bay which was a great success. Plenty of fisho’s turned out to take part in the day even the trying weather conditions could not turn people away.

Had some really mixed reports from the Goulburn River this week, wether the terrible weather we had on the weekend had a part to play? or changing water levels? I'm not sure but either wouldn't have helped! Some Redfin being caught around Yea, Nagambie Lake and Kirwans Bridge, worms the best method. Surprisingly some small Cod being caught near Chainman's Bridge on Cheese, even with the cool water, your still in with a chance, a few nice sized Cod still being caught at Kirwans Bridge, mainly on Surface lures and Spinnerbaits. Below the Weir has been hit and miss pretty much anywhere you try, some days resulting in good numbers of good sized Cod on a mixture of Old Mate and Codger Hardbodies, Bassman and Pirate Spinnerbaits and Codger Surface Lures, then some days Bardi Grubs and Scrubworms working well. Murchison to Toolamba fishing well, Arcadia to Shepparton has been hard work, but Undera to McCoy's Bridge has been fishing really well. The River looks really good everywhere, so get out and enjoy some nice Autumn weather that is on its way.

Waranga Basin is still producing big numbers of Redfin, most small, but a few keepers amongst them, Trolling small Hardbodies, even up the size to Size 2 Stumpjumpers to weed out the smaller fish, same with the soft plastics, uping the size to a 70mm Slickrig or 4 inch Berkley Nemesis in white picking up a few more bigger fish. Still plenty of small Redfin in the channels from Tatura to Kyabram, mainly on small Yabbies and Worms, the occasional Yellowbelly and Cod being hooked around the channels in the Tatura area on small plastics and Hardbodies intended for Redfin. Try Punt Road area.

Once again another great report from Colby, Hi Shane, over the last week there has been a good amount of fish caught in Eildon with the more dominant species putting on a good show for some lucky fisho's. Although the lakes dropping quickly at the moment it doesn't seem to be effecting the fishing to much with plenty of Redfin still getting caught, some getting up around the 3lb mark, scrubbies yabbies, bobbers and soft plastics are all still doing the job well amongst the trees near Woolshed Inlet, Italian Bay, Beattie bay, and the main Goulburn Arm. There has been a couple of Murray Cod caught getting up around 76 and 86cm on spinner baits near Jerusalem Creek and a fat 96cm was caught up in the Big River Arm on cheese. A few local fellas landed 20 trout in the space of a couple of hours on assorted Tassie Devils just trolling in some deep water and a few Yellowbelly are also being picked up unintendedly by anglers chasing the Reddies.
that's all for this week, sorry no report for Nillahcootie as it has been very quite.
Cheers Colby Croxford-Demasi

The Murray is still on fire, plenty of Big Cod and most Fisho's getting at least 1 shot at a metre fish every session, good news is we are starting to get some really good reports from the West, South Australia to Mildura to Swan Hill all starting to get some big Cod, Big Hardbodies working the best, Coddog 165 Deep the standout with multiple metre fish being caught over the last week or so. Further East and Beari, Ulupna Island to Cobram fishing really well, Coddog Surface Lures catching an absolute horse over the weekend. Sam from Cobram Outdoors said there are plenty of good Cod and Yellowbelly being caught around Cobram on Old Mate Lures, quite a few Metre fish amongst them. Lake Mulwala is still fishing really well also, mainly over the Eastern Side, surface lures and Jackal swimbaits such as Chibitarels and Gantarels starting to work really well. Storm RIP Shads and Curl Tails working well also. 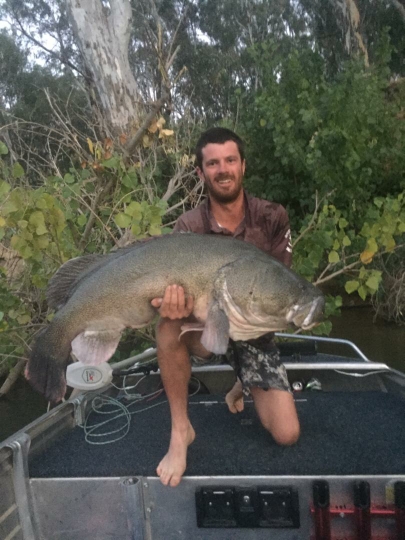 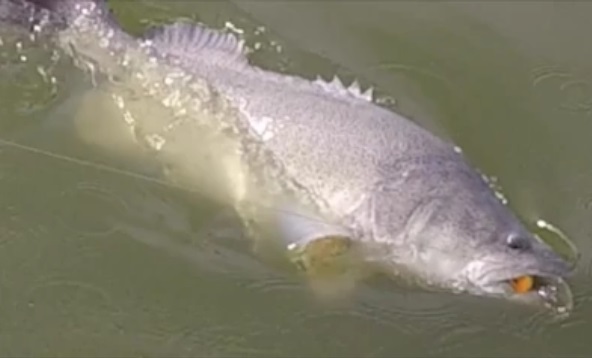