Starting off inside Corio Bay the pinkie snapper were intent on hitting bait and lure that crossed there path. The spoil grounds out from Limeburners boat ramp saw plenty of pinkies along with some thumping big 50cm plus flathead. Garfish responded well to a beryl trail from the rocks at Limeburner’s and similar tactics worked well at ST Helens too.  The key was to get the wind behind you as to allow proper presentation of your float.

Clifton Springs was a hot spot for whiting anglers with the Curlewis Bank in 6 meters of water out from Herlsy Rd a very popular location. Squid continued to show up in fantastic numbers and a handy bait supply. The calm nights last week allowed for floundering walking the shallows with a light and spear. Anglers banked some very impressive flathead, squid and Garfish with the flounder proving hard to come by.

Just around the corner at St Leonard’s the whiting continue to improve with bag limit captures now likely. Out deeper in 20 meters of water anglers have found gummy sharks to just over 1 meter in length along with the odd snapper. Pilchards or fresh squid strips work best.

Queenscliff Harbour has some nice sized silver trevally on offer in the harbour. Casting Gulp turtleback worms on a slack tide is a great way to cross paths with these guys. Out around Bell Reef squid and some well-conditioned ones too were on the chew. Casting larger size 3.5 artificial jigs worked best here.

Fishing offshore was on fire last weekend, Fez Sepic ventured out from Barwon Heads Sunday morning. Anchoring up in 30 meters of water Fez dropped some baits down, not having to wait long Australian Salmon busted up all around the boat making for some great sport and handy bait supply. Baiting up with fresh salmon Fez was straight onto an awesome gummy shark of around 14kg. Trelly’s Fishing World Geelong’s Peri Stravropoulos and his mate Josh Whitford were anchored up only about 100 meters away where they too boated a gummy shark of the same size.  Anglers have also report schools of Southern Bluefin Tuna still hanging around all though they are very hard to tempt. 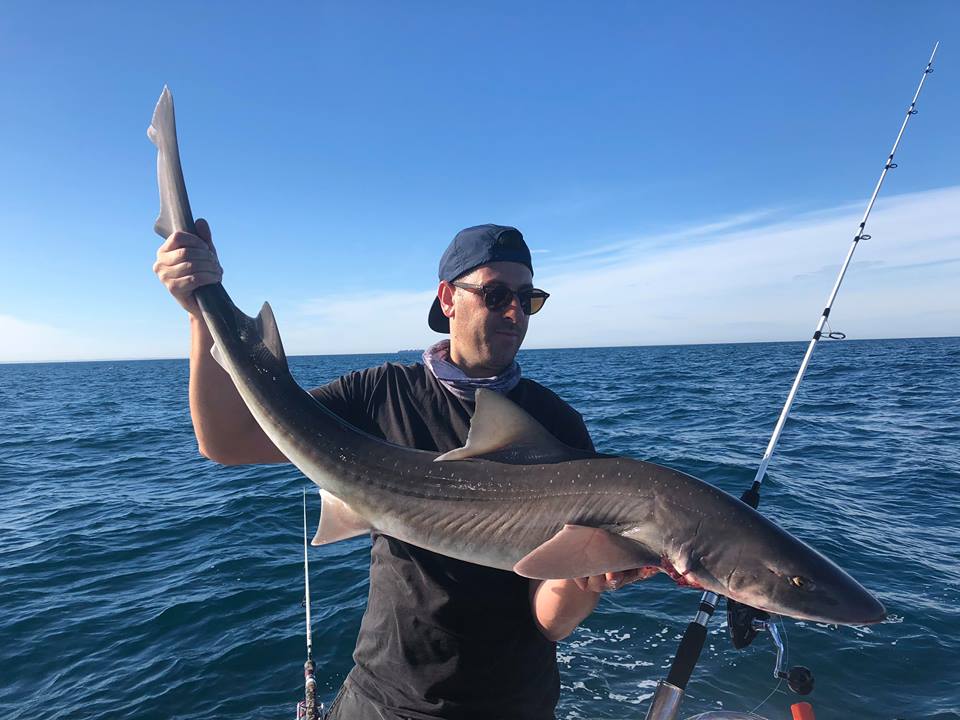 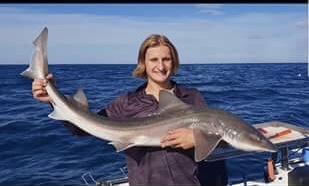 Heading down the coast and anglers spinning the beaches and rock platforms have found the salmon fishing really start to improve. Beaches like Bancoora also produced gummy shark for those fishing into the night.

Freshwater anglers still persisted with Wurdee Boluc and found some monster redfin on the go. Long cast with spoon type lures aided in tracking down quality redfin. The odd trout was also taken as a by catch.

Stony Creek was a safe bet for brown trout to just over 1kg with similar tactics to Wurdee working well.

Anglers had fun on carp in the Barwon River with break water a popular location. Carp to over 6kg were gobbling up most baits with super sweet corn kernels the best bait.

There has been some mixed reports from above the Weir in the last week, some good reports of Trout and Redfin around the King Parrot Creek area and Goulburn Park in Seymour and Redfin and still a few Cod being caught around Nagambie Lake and further south to the Wineries and Horse Studs. Kirwans Bridge is still fishing well, surface fishing is producing some nice Cod and Bobbing Shrimp and Soft Plastics such as 3 to 4 inch black grubs around the Willow Trees is producing a few nice Redfin and Yellowbelly, not the same numbers as a month ago, but still some nice fish around. The River below the Weir has dropped and in quite clear and looks really good, Bait fishing, Trolling, Casting Spinnerbaits and Mumblers and Surface Lures are all working really well and fishing from Murchison to Up Stream of Undera all looks great for the rest of the season, the fish sizes seem above average this year compared with last season. Bait fishing is consistant, Shrimp, Scrubworms and Cheese all working well. Area's to focus on would be Murchison East, in from Dargalong Road, Arcadia, Bunbartha and Fidge Road Undera.

Still good numbers of Redfin being caught at Waranga Basin on the usual, Trolling Size 2 Stump jumpers and RMG Poltergeists 50's, finding the schools, then bobbing 3 to 4 inch white/red soft plastics and Ice Jigs or Shrimp working the best. Still a few Redfin being caught in most of the Main Channels around Rushworth, Tatura and Kyabram, target the Drop Bars along the Tatura/Rushworth Road and McEwen Road to Kyabram.

With the water cooling, Trout are starting to be caught in Victoria Lake, Powerbait under a float and Fly Fishing the best methods at the moment and focus the area from the grass hill near Aqua Moves to the Boat Ramps. Some big Yellowbelly being spotted, but not hooked yet. Redfin are being caught in Victoria and Graigmuir Lakes on Soft Plastics, small Vibes and Worms. Plenty of Cod and the occasional nice sized Yellowbelly being caught in the Main Eastern Channel, reports saying there are big schools of little Redfin around the Invergorden area, so I would try any Imitation Redfin plastic, spinnerbait or hardbody, and focus that area in  particular.

All I can say is WOW, some cracking fish caught and lost over the last few weeks and is only getting better and better over the next few months, if you want to catch that metre fish, the next few months will be a great chance. Anywhere from Turrumbarry to Yarrawonga, Lake Mulwala, Bunderlong and up the Ovens, all places to give a go and all producing good sized fish. There hasn't been one particular technique or area that has stood out, Bait Fishing has produced good numbers, Surface Fishing working well, and the trusty Spinnerbait probably the most consistant so far, I would think that Swimbaits and Big Soft Plastics will start to work well as the water cools. A great example of what to look forward to is Kyle Hippisley having a great weekend at Mulwala with his Dad, after missing 4 or 5, 1 over a metre Saturday, landing this 123cm Horse on the Sunday on a 4D Spinnerbait. Orse Studs alond Northwood RoadH 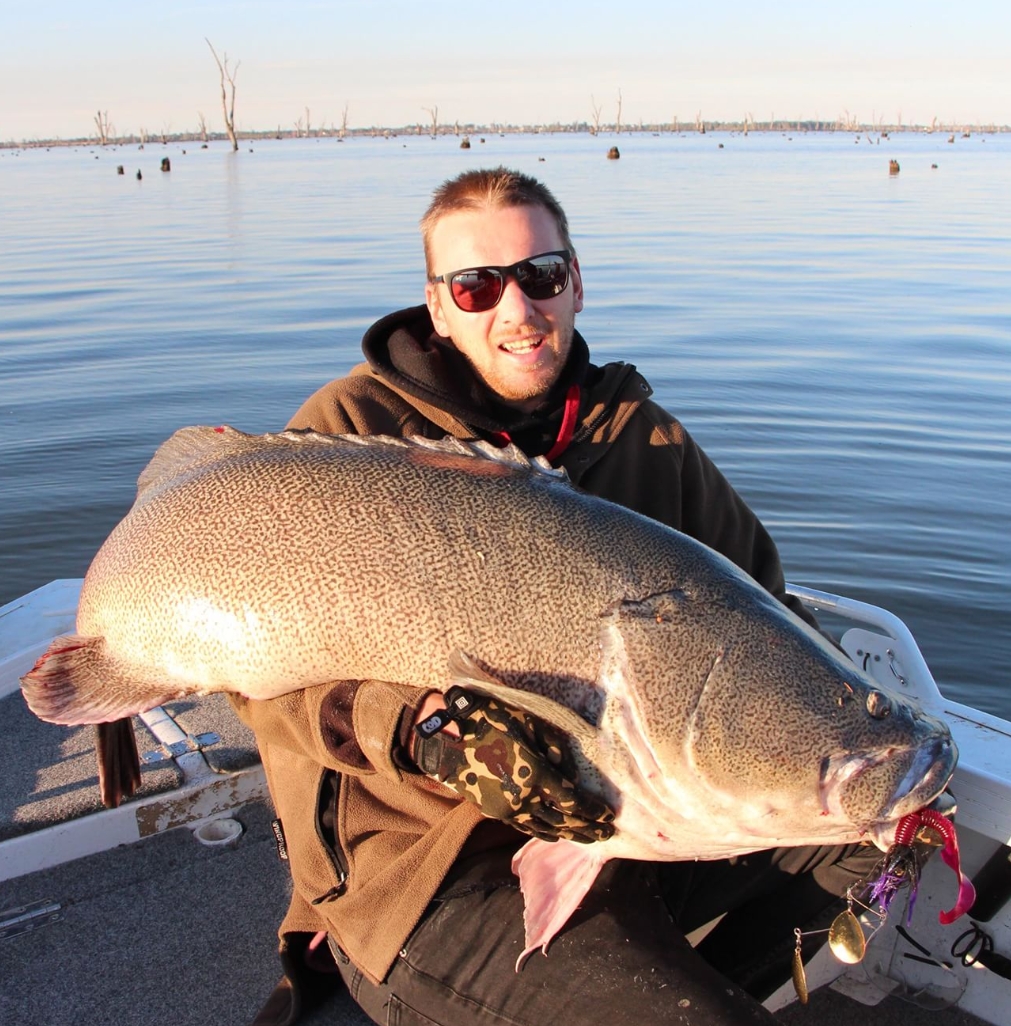