Anglers did not waste one second of the nice weather over the Easter break with a spectacular verity of fish on offer.
Right on the Geelong door step Corio Bay was a fantastic location giving up pinkie snapper to 45cm along with flathead locations like the rocks at Limeburner’s boat ramp and Cunningham Pier were most productive. Soft plastics or pilchard fillet did the job nicely.

Heading down to the Bellarine Peninsular and the fishing was sensational Clifton Springs saw plenty of squid between the boat ramp and down towards Hermlsy Rd in three to four meters of water ideal, jigs of choice were a size three in a white colouration. Out just a touch deeper in six meters of water whiting were snapping up pippie with anglers finding bag limit captures possible. Drifting near the channel was a sure bet in securing a feed of flathead. Floundering on a nice night has also been productive. 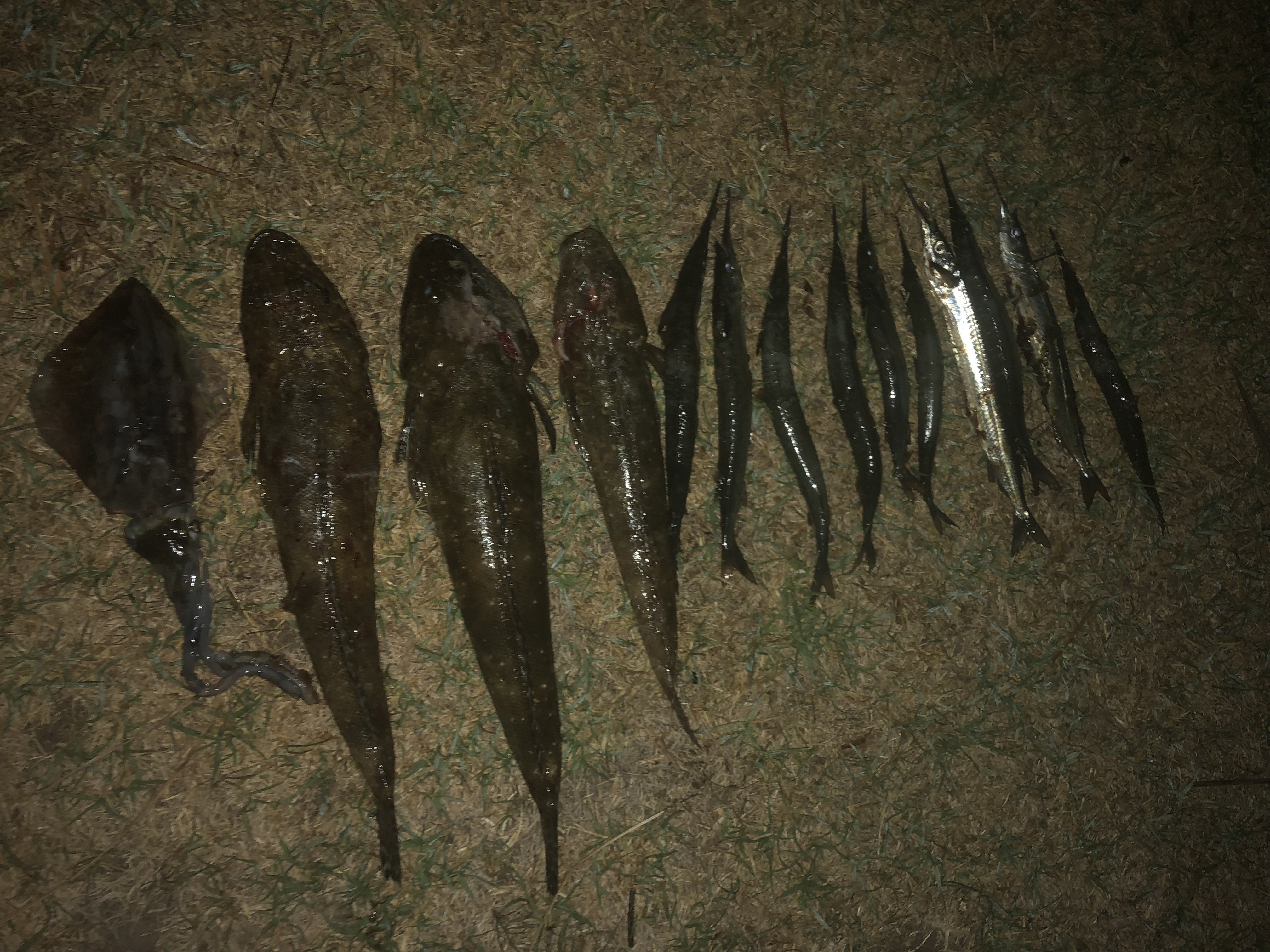 Over at St Leonards whiting was a safe bet along the well know section called Bourke St. But in a little closer over the weed beds some thumping big squid were on the chew. Fishing the last of the run in tide was most productive time with larger size 3.5 jigs. Trelly’s Geelong Kevin Hunter snagged himself a few squid Saturday afternoon over at St Leonards. Inside the Swan Bay channel flathead, pinkies, silver trevally and garfish kept anglers entertained again on the run in tide. 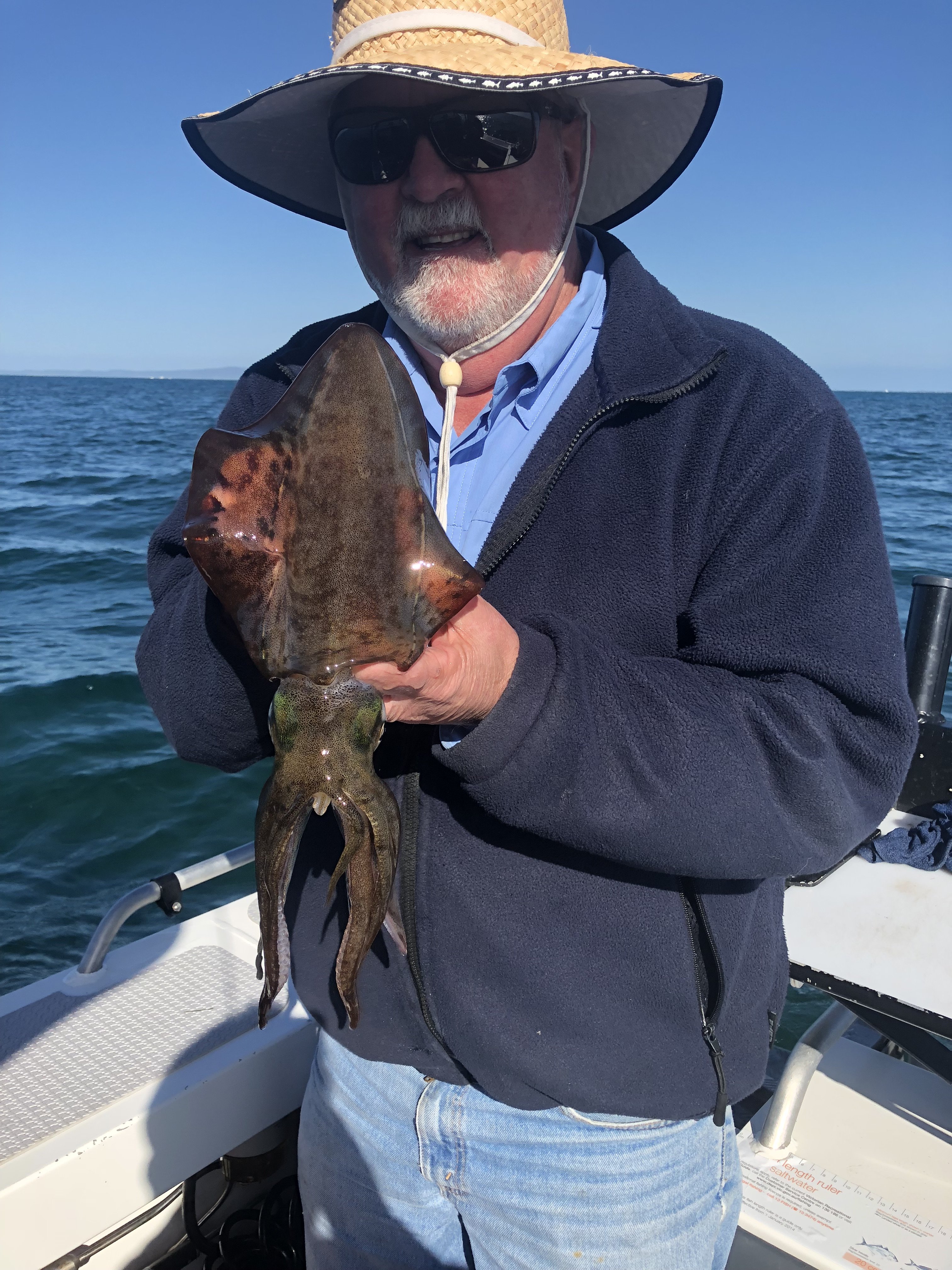 In the RIP kingfish were still there for anglers fishing the right times. Jigging or fishing fresh squid baits boated fish of around 10kg. Reports of tuna were still popping their heads up too at times.

Offshore some impressive captures were recorded with Peri Stavropouls dropping a bait down in thirty meters of water out from Barwon Heads boating a 16kg gummy shark. 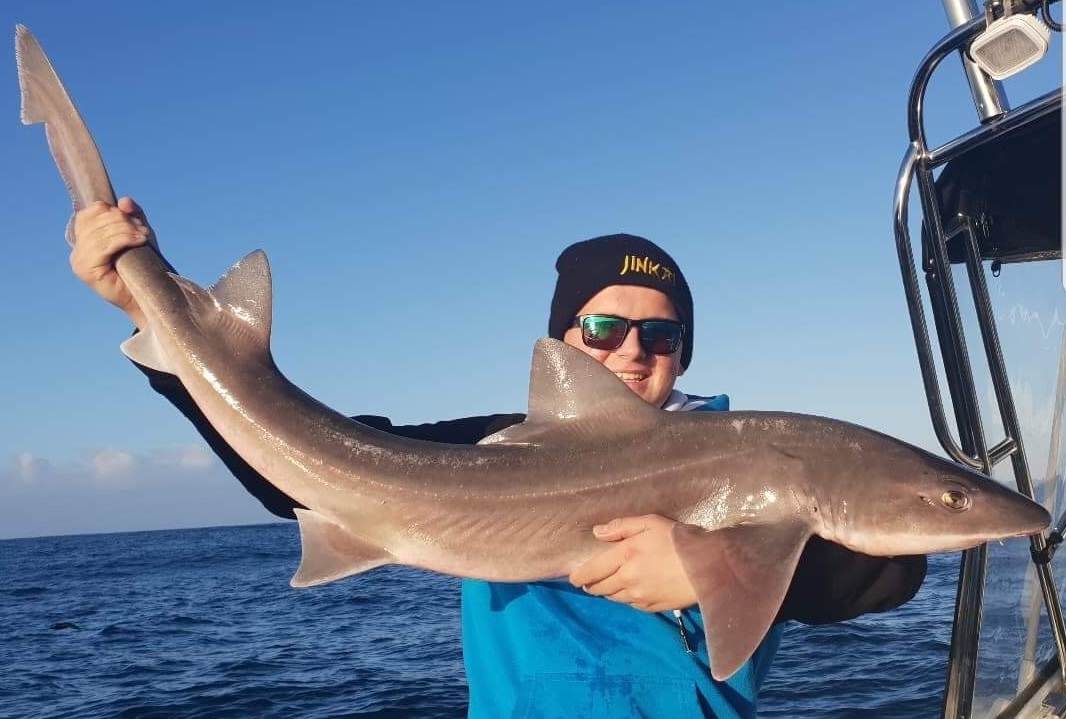 Chris from Gone fishing charter ventured out a little further and guided his clients onto an awesome mako shark that gave them a run for their money. 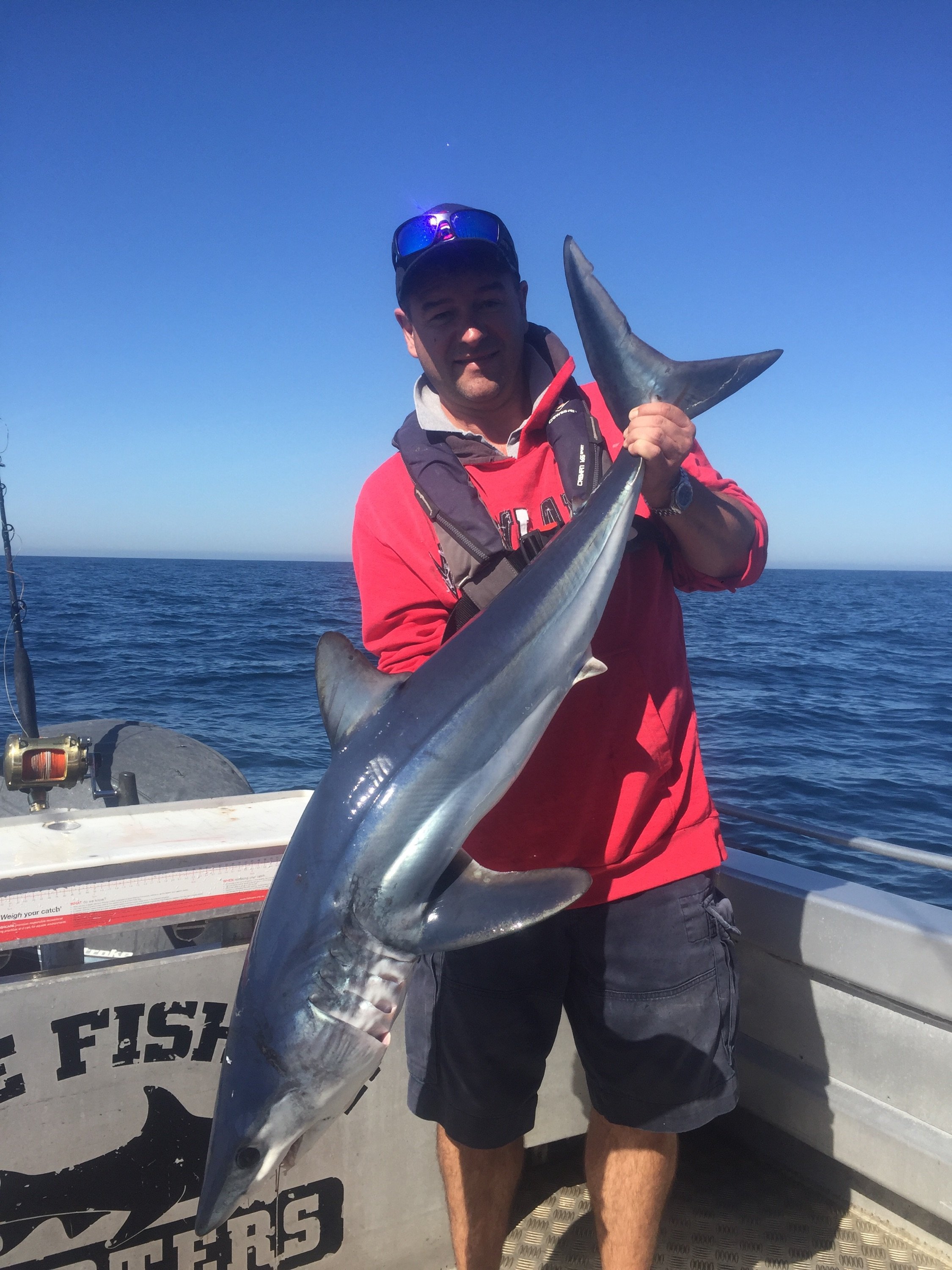 Inside the Barwon Estuary the elephant fish have made an appearance. Daniel Baden and I spent a few hours Monday afternoon on the run in tide fishing fresh squid and pilchard as bait were we encountered some elephant fish. Of note the bite time was small, but some impressive silver trevally to 40cm made up for the wait. 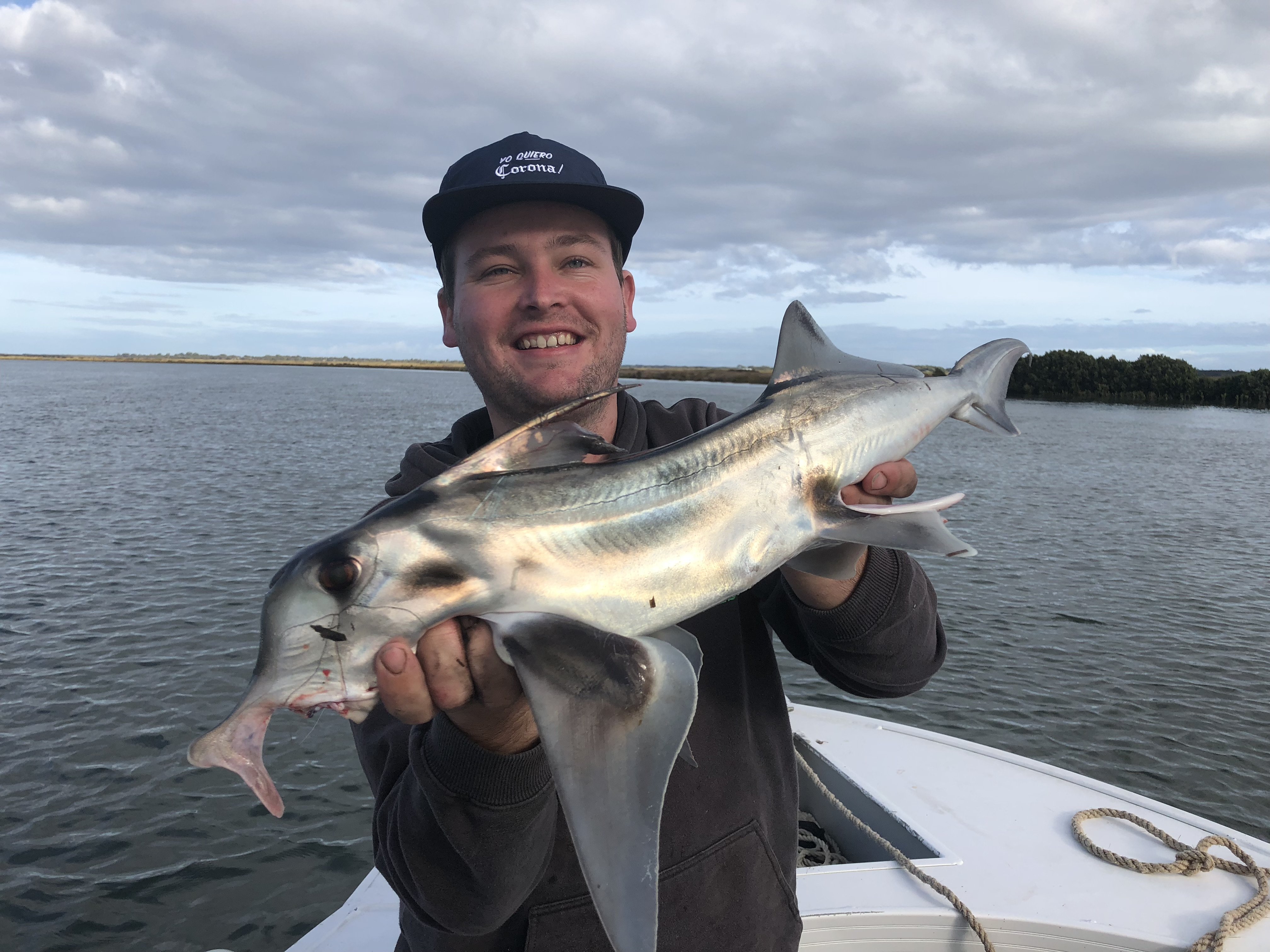 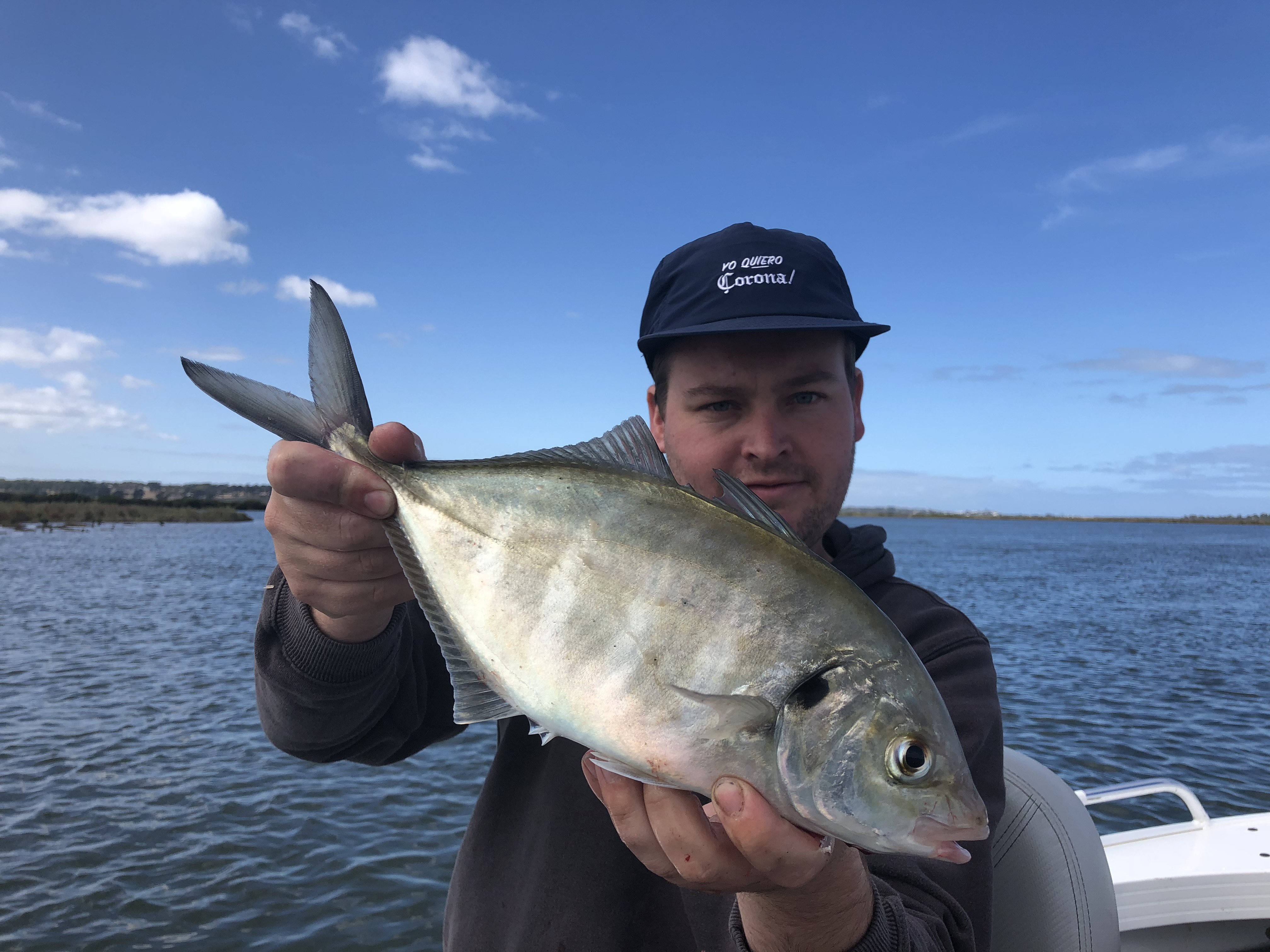 Down the coast spinning for Australian Salmon was very effective with numerous fish hitting the beaches. Inside the small estuary systems bream were devouring scrub worm as bait or Z-Man motor oil 2.5” grubz.

Freshwater fisho’s found Lake Purrumbete fishing well for a mixed bag with both brown and rainbow trout making it into the boat although not always trophy fish. Redfin were able to be taken in large numbers once a school was located.

Closer to home the Barwon River is still the place to target redfin on small hard body lures with Queens Park area around structure an ideal place to start.

The Estuary Perch were well and truly on the chew down west for Matthew Hearn and Tiffany Newton. 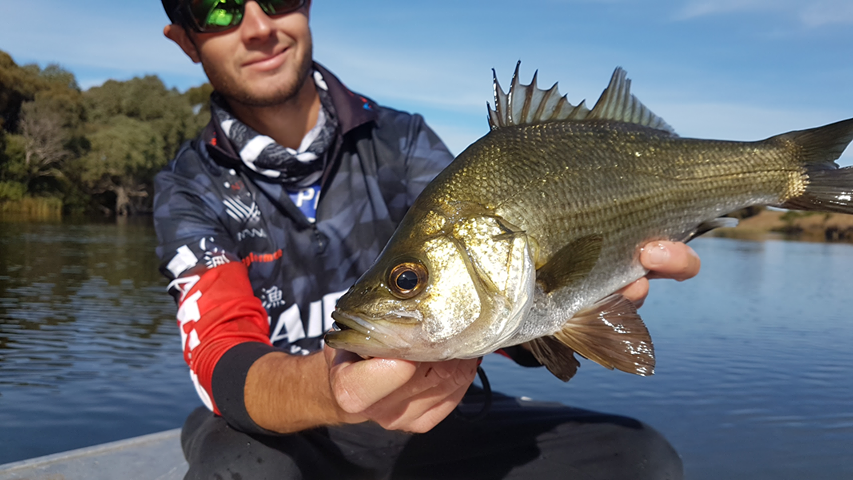 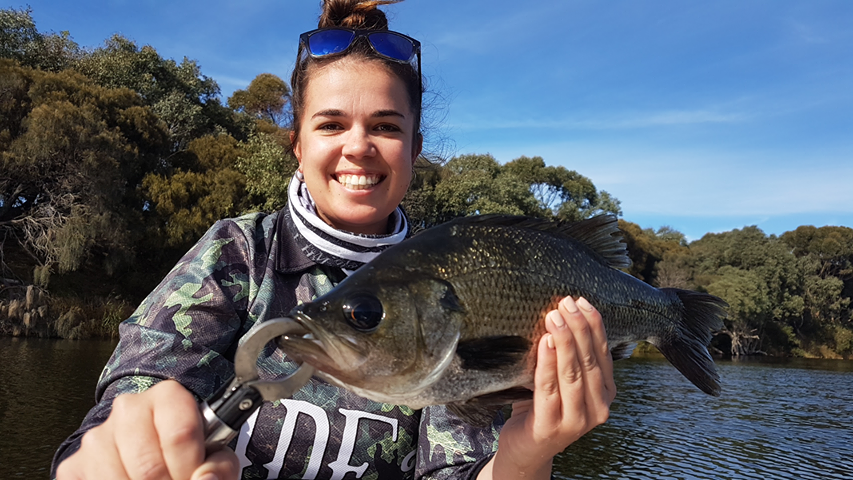 A few Trout and Redfin being caught in the River between Yea and Seymour, Worms and small Yabbies getting the Redfin and small Hardbodies such as TD Minnows, Tassie Devils and Mapso and Rooster Tail Spinners getting the Trout. A few Redfin between Seymour and Nagambie, water is very cool, so the Natives have gone quiet, with the exception of the Kirwans Bridge area, still a few good Cod being caught on Surface Lures and Spinnerbaits. Below the Weir and towards Shepparton is fishing really well, the River has dropped slightly and is really clear making lure fishing really good, Trolling Hardbodies such as Old Mates, Codgers and Stumpjumpers, Casting Pirate, 4D and Bassman Spinnerbaits and some Surface and Swimbait fishing all working really well, one fella casting a modifying a Zerek 5.5" Live Mullet in Temmy colour by adding a set of Harrow Willow Blades to it, changing the Treble to a set of assist hooks managed a Metre Cod within only a few kilometres of the Shepparton CBD in the Goulburn, and with plenty of other customers catching a lot of Cod between 55cm to 80 odd cm's there is plenty of Big fish to be caught and we are getting similar stories from Undera way also.

The Trelly's fished Echua way over the Easter break were Mary landed this well conditined 47cm silver perch tipping the scales at 4.5lb. 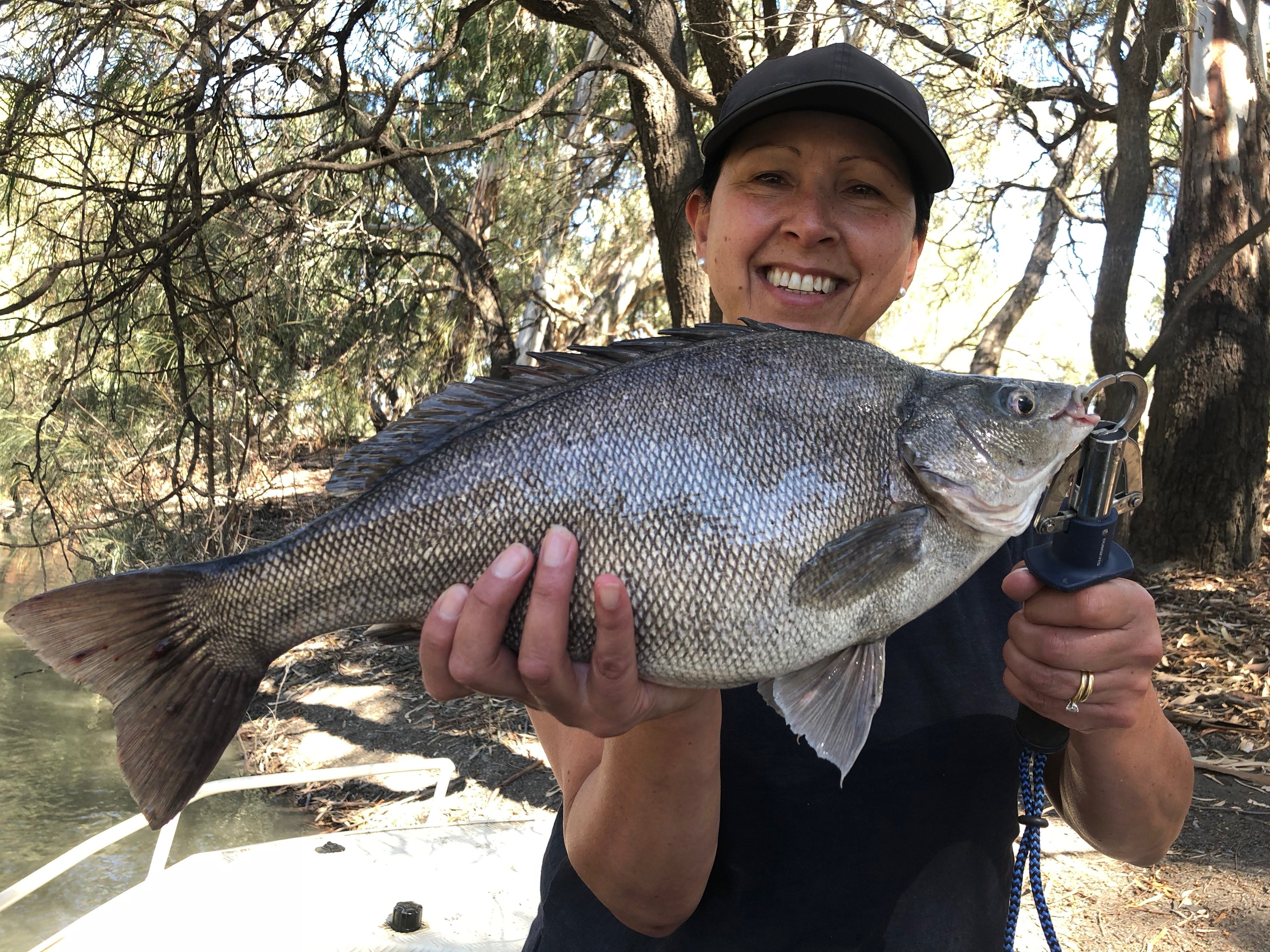 The Waranga Basin has certainly fired up even more, with huge numbers of small Redfin and a few bigger fish being caught lately, double Hookups on the same Hardbody not un-common, 55mm Codgers in Red, and the White RMG Poltergeist the standout lures, Glen Wilson catching well over 200 fish to get his feed over the long weekend. A similar story for most of the Main Channels, mixed in with the Redfin arte some nice Yellowbelly and if your fishing the Main Eastern near the Weir, there are a few Cod being caught also and are great fun on the lighter gear. 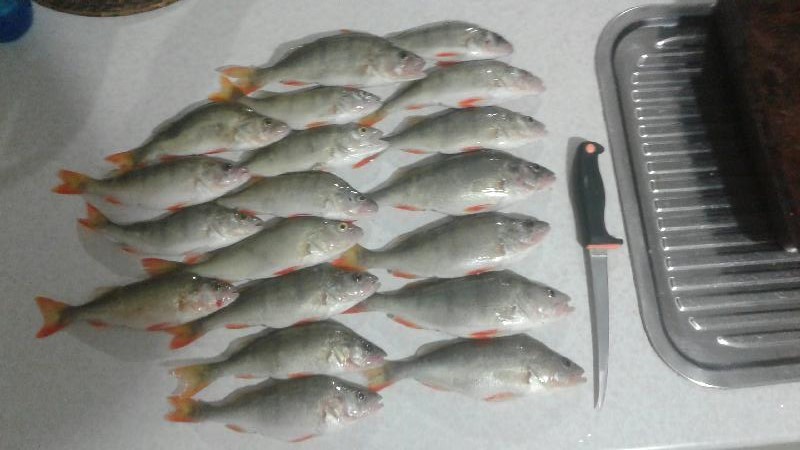 Besides the great Cod being caught in the River, a few smaller Cod are being caught on small Vibes and Plastics in Victoria Lake by fisho's chasing Redfin and Trout, some big 60cm plus Yellowbelly are being spotted in the shallows of the lake, but none have been taking any lures yet, maybe try some 3 inch black plastic grubs to try to entice them the bite. The Main Eastern Channel towards Euroa/Shepparton Road is still producing some nice Cod, mainly on Cheese.

Another great report sent to me from Colby at Mansfeild,

The last two weeks in both Lake Eildon and Nillahcootie have been reasonably good with good fish being caught in both, for the last two weeks Eildon has supplied some nice Murray cod in the Goulburn arm around Goughs Bay in about 5m of water on stump jumpers in the purple and green just on the troll, there was five caught the smallest being 76cm and the biggest 86cm. Good sized redfin are being caught in large numbers near Italian bay, woolshed inlet, Beattie bay, Darlingford reach, Big River arm and Burn creek inlet, scrubbies the odd yabbie,soft plastics and ice jigs have all been the go around trees in about 5 to 8m of water. Yellow belly are taking the same bait but reports have said that majority of the strikes have been occurring when the bait is being retrieved.

In lake Nillahcootie there has been some nice yellow belly getting caught just below the wall in the pools, a couple of mates and I decided to go for a walk flicking spinner baits and jackalls into the pools and ended up pulling 4 nice yellow belly out all around 40cm on the jackall Doozer's and TN 70's in the darker colours. Nillahcootie is reasonably low but there is still cod getting caught right up in the sandy creek on bibbed hard-bodies and spinner-baits in and around structure on the cast. That's all for the past two weeks cheers Colby Croxford-Demasi.

Stories of heaps of big Cod being caught over the long weekend, everywhere from Echuca to Mulwala to Bunderlong, a lot being caught on Surface Lures, Spinnerbaits and Trolling all sizes of Hardbodies, the only common element we can see at the moment is that Early  Morning has been the best time and the bigger fish have been in water less than 2 metres deep, we have heard of 3 different fisho's within 60 metres of  each other near Cobram catching a fish over a metre each within a 10 minute period in the Morning on Lures. Surfacew fishing at Night in Lake Mulwala and Bunderlong area is fishing well for big Cod also, the fishing in the Murray is only going to get better, the River will be probably low and clear like it was in the last few months of last season, so we feel it will be a great opportunity for fisho's that haven't caught that metre fish to get up over the next few months and have a go, if you put the time in, you will get one. 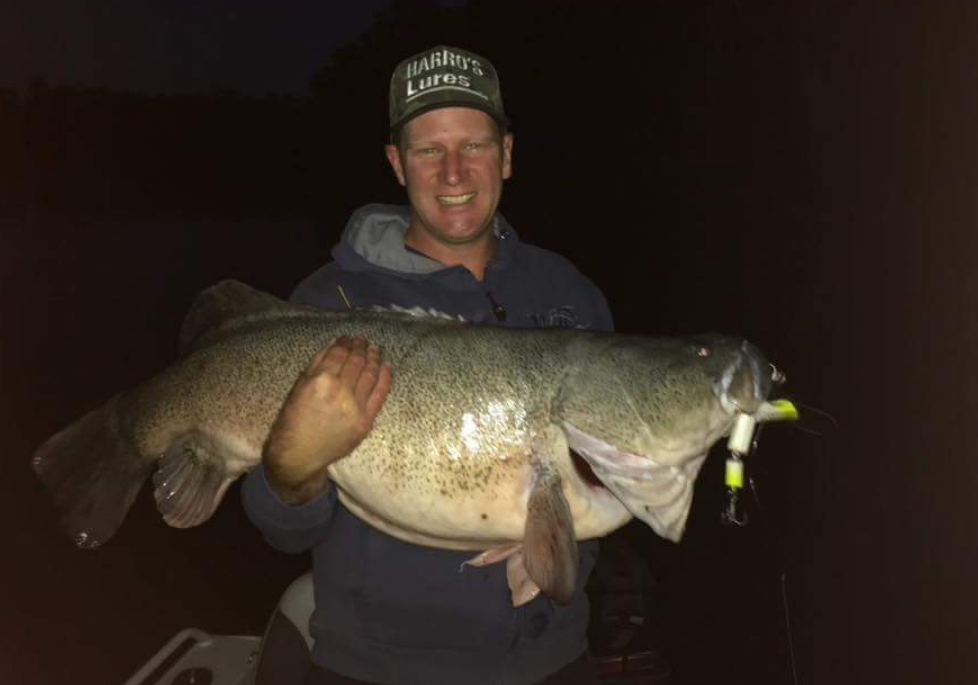 Next Week with what looks to be some calm condtions make the most of the offshore fishing and give the kingfish one last crack or maybe drop a bait for a gummy shark. The Barwon Estuary is going to be the best place to cross paths with an elephant fish. Head down to the new Portarlington Harbour and cast a line out of the rocks for a whiting or pinkie.