Off shore from Barwon heads had schools of southern Bluefin tuna that were visible in the calm conditions. Although they can be hard to tempt at times, the Gulp 7inch jerk shad in white was a stand out lure for a number of anglers who were able to entice them to bite with long casts into the schools of fish. Other techniques such as trolling small skirts are also a productive way of targeting our local tuna. Chris Pitman from the shop and his friend Daniel Baden ventured out in Saturday mornings glassed off conditions in search of a tuna and before long were hooked up to a bigger than average school fish after sight casting into the commotion, using light gear they fought the fish for an hour before losing the fish at the side of the boat. Despite losing the tuna, they still had a fun and productive days fishing with some big Australian salmon taken as a by catch. 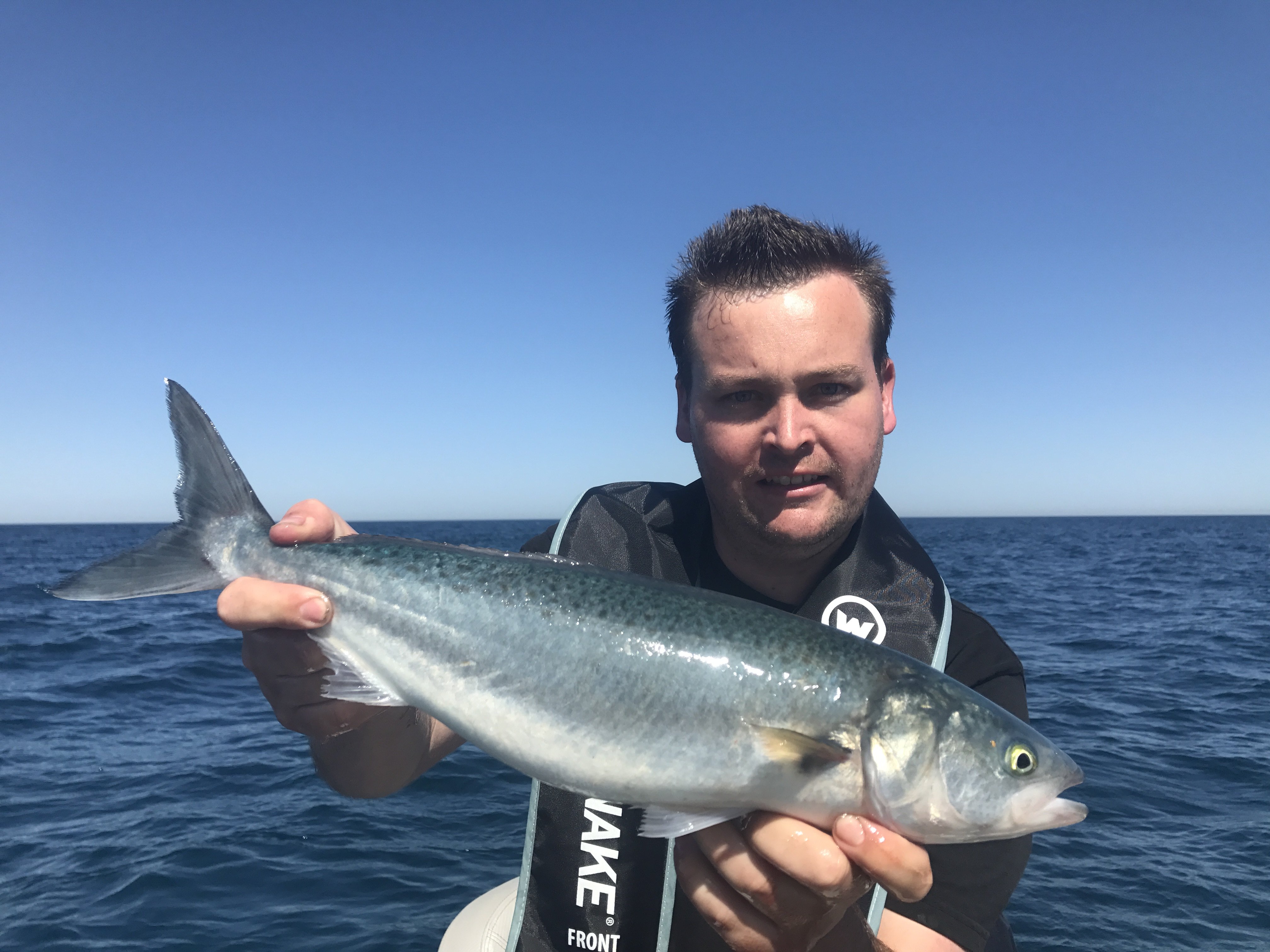 Still off shore, there are kingfish and salmon in good numbers to 2kg. Hugh Hanson and Neil Slater got out on the weekend and tangled with a nice kingfish that ate their squid tentacle bait, while out there they noted plenty of Australian salmon around. They ended up with a mixed bag for the day consisting of kingfish, arrow squid and flathead. 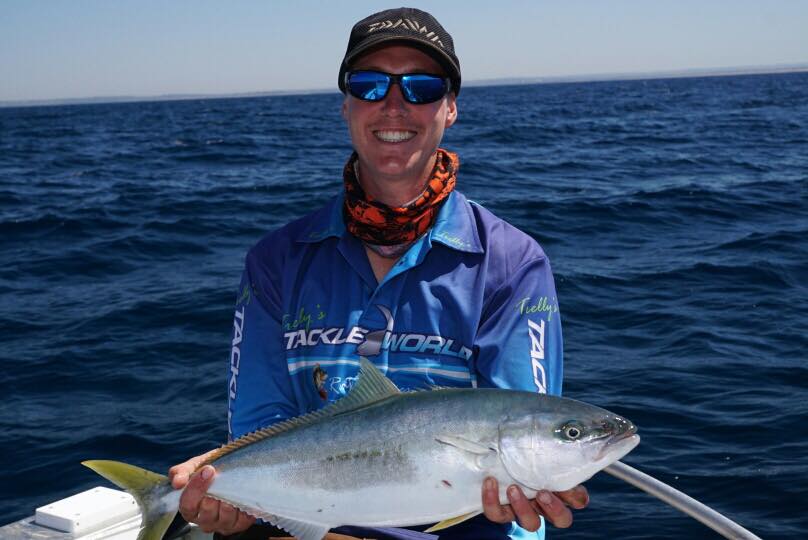 Fez and his mates had a ripper session on some serious Kingfish out front of the RIP last saturday. 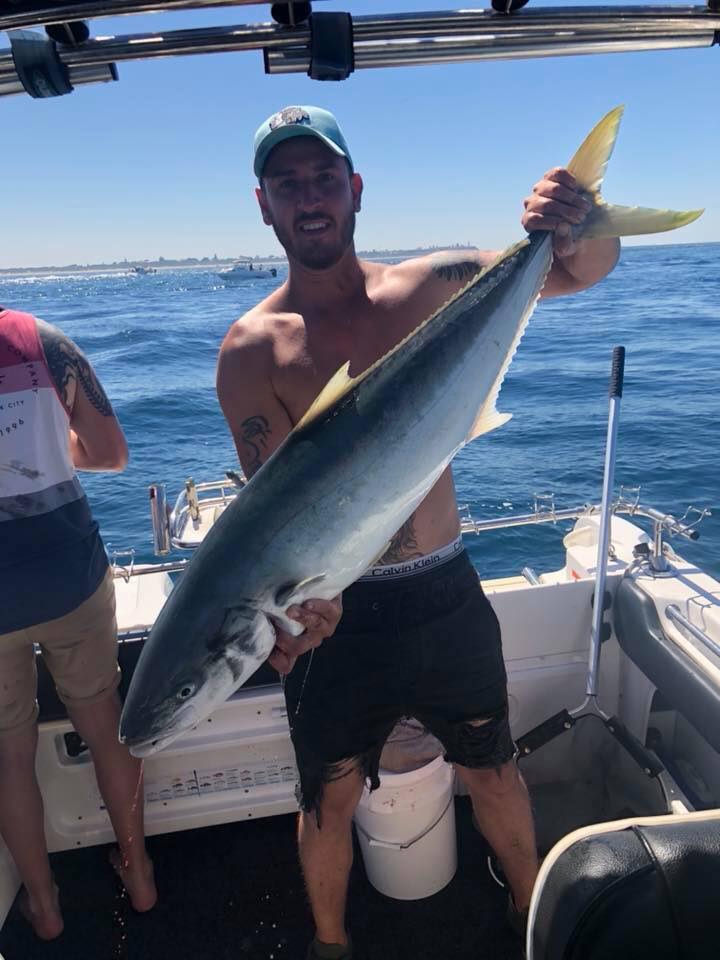 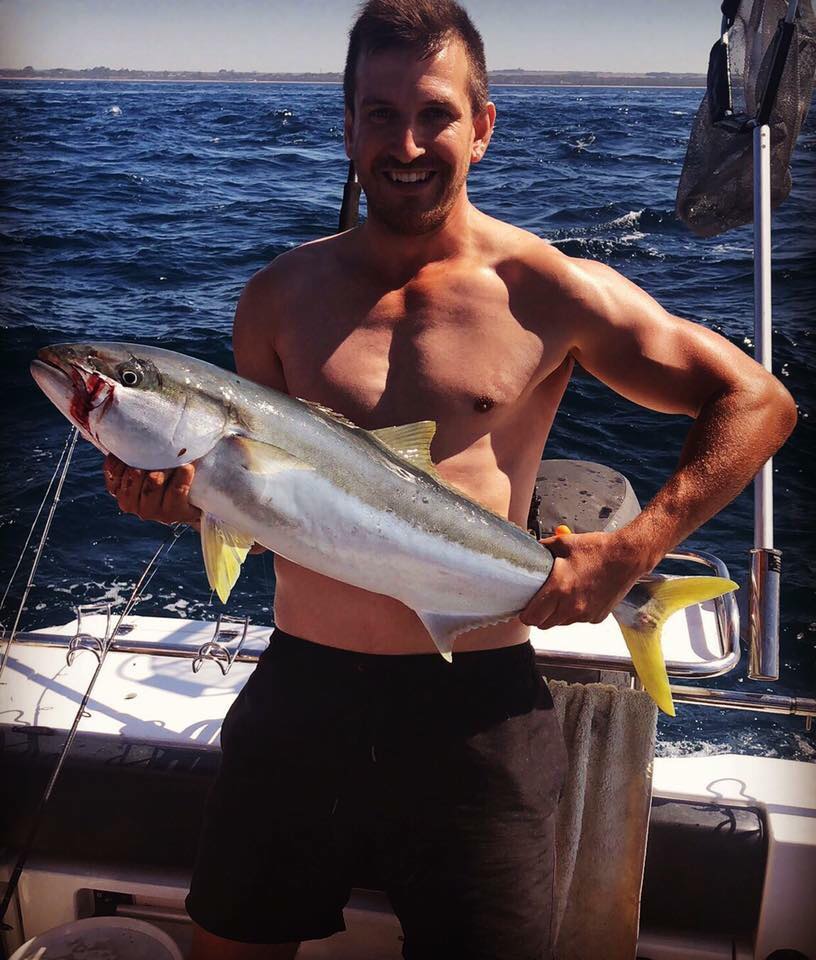 Corio bay inner harbour has also produced some quality mixed bags with snapper/pinkies, squid, flathead and whiting all to be caught.

The Alcoa spoil grounds produced snapper to 2kg for anglers drifting while casting soft plastics, flathead were also a welcome by catch. Those chasing a bag of squid didn’t have to venture too far from the Clifton springs boat ramp with some anglers reporting bag limit captures only 200 meters from the ramp.

The Geelong waterfront is back on the map this week with reports of pinkies on the bite from the Geelong yacht club area right across to the north shore rocks. The best bait seems to be pilchards or blue bait with casting soft plastics also a productive method of landing a pinkie or two.

Steven took the kids out in Swan Bay where they had a excellent trip boating large pinkies and garfish. 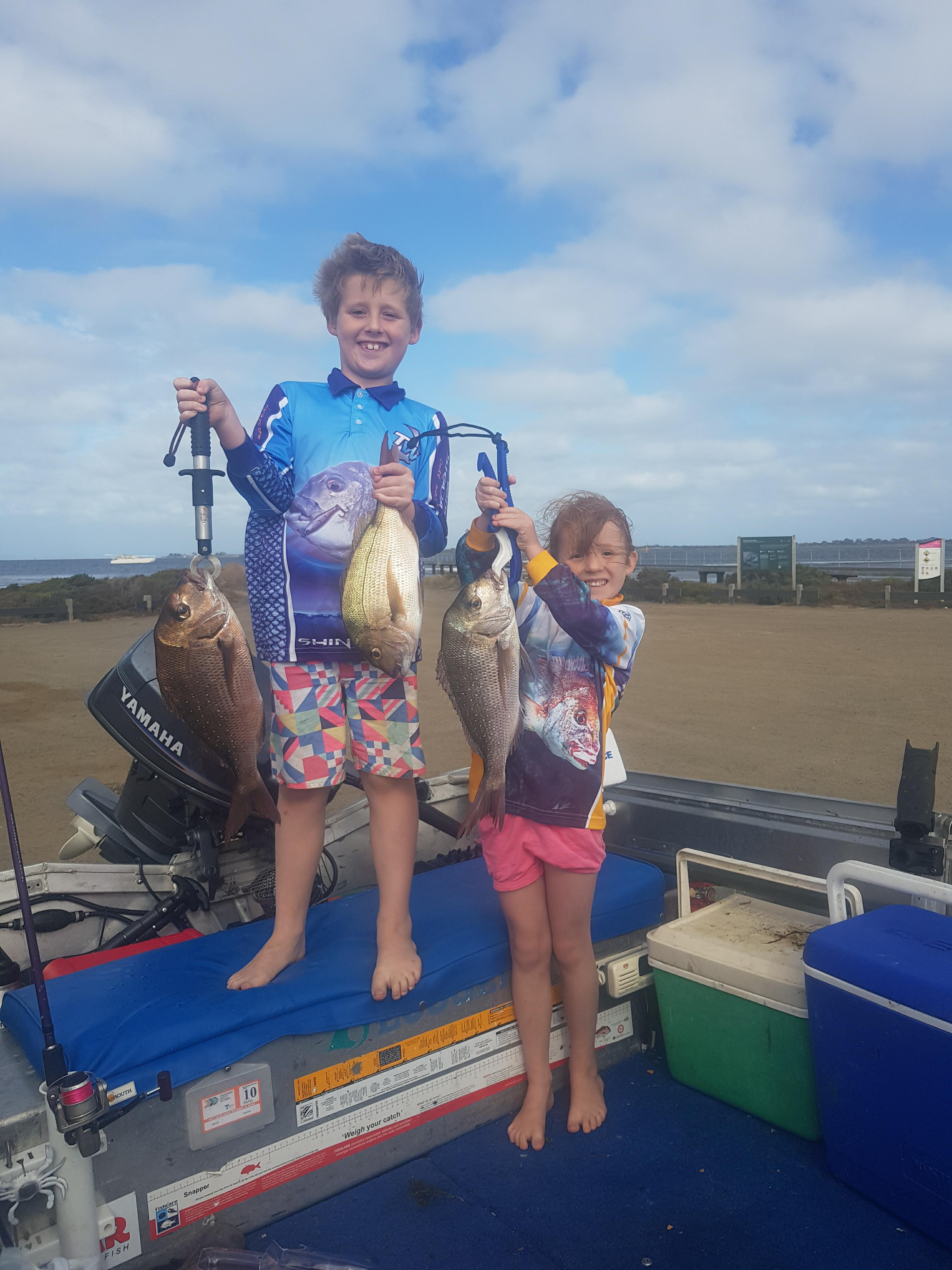 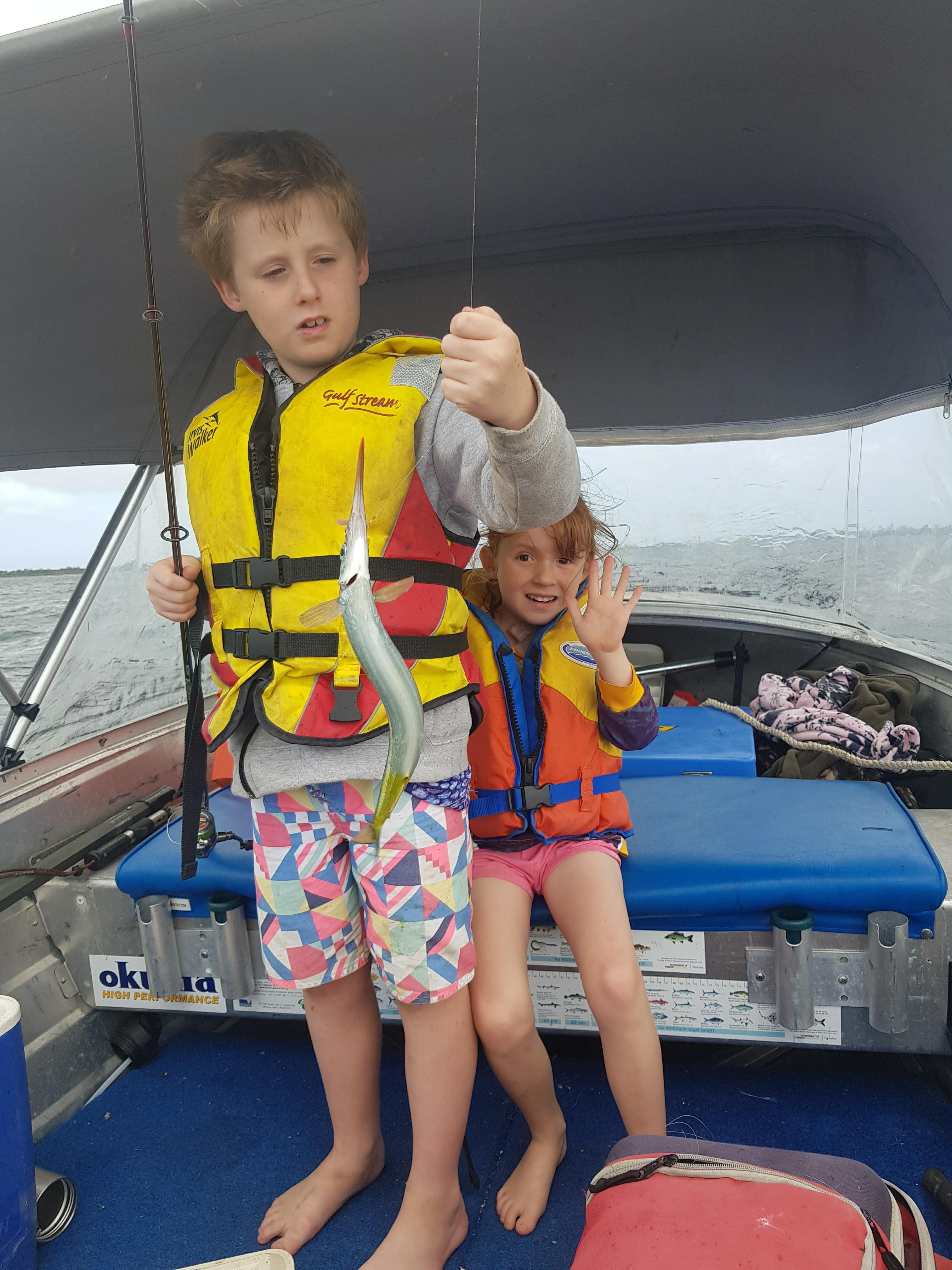 Those chasing a bream at the moment needn’t travel too far with most of the creeks from Torquay to Apollo bay all fishing well. Baits such as prawn and scrub worm are ideal for bream of any size but if you’re looking for those bigger fish, try small freshwater yabbies on a very lightly weighted running sinker rig.

Cesare took a trip up on the marlin encountering excellent fishing taking this nice model. 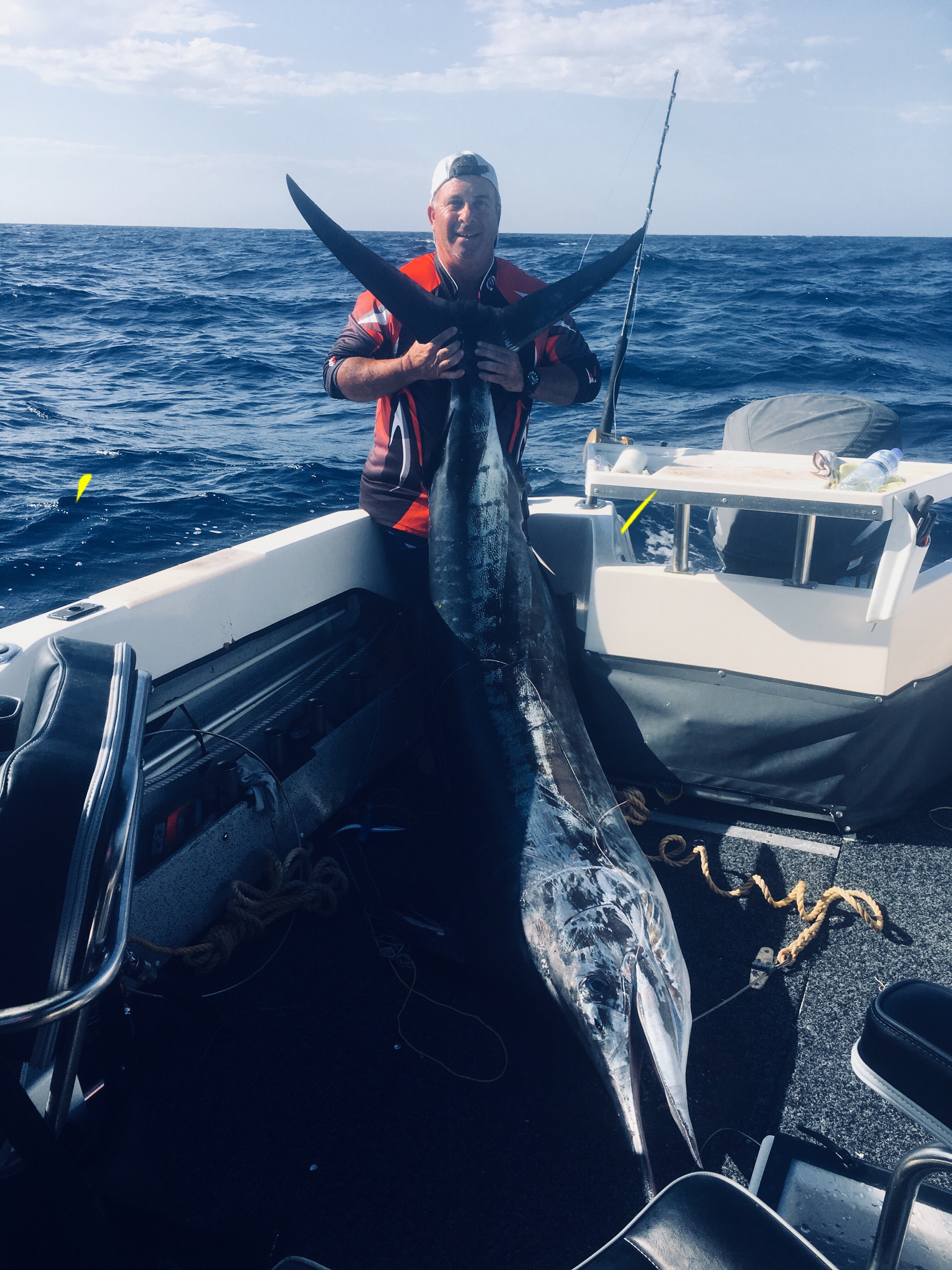 Freshwater fishing at the moment is still hot with redfin and trout the main focus locally. Wurdi Bulloc reservoir saw redfin in decent numbers on the bite. Although the big ones are yet to appear in good numbers, fish around the 30cm mark seems to be the average size at the moment. Casting lures and covering as much water as possible is the ideal method of targeting these fish, those wanting to use bait should have luck with scrub worms or yabbies.

The Barwon river is running slow and clear at the moment after a break from the rains and as a result the fishing is fantastic. Redfin again are hot on the bite with 3 to 4 inch lightly weighted minnow or grub style soft plastics working a treat as well as any diving minnow style hard body lure. The lack of flow at the moment will allow you to use a light burley and bring in a carp to your area, baits such as bread and sweet corn are proven favorites for Barwon river carp.

The River from Trawool to Nagambie and to Kirwans Bridge has quietened a little, there has been a lot of water travelling down from Lake Eildon and cooled the water temp and slowed the fish biting, still a chance of a Cod, Yellowbelly and Redfin, but probably focus on the Backwater and Creek areas that still hold some warmer water. Below the Weir is still running high and is fishing well right through Murchison, Toolamba, Arcadia to Undera. Bait fishing with Shrimp, Scrubworms, Cheese, Yabbies and Chicken working well for Cod around the 45cm to 68cm, and Bassman, Pirate and 4D Spinnerbaits the standout with the Lure Fisho's, Purples, Whites and Oranges the colour of choice.

Waranga Basin still fishing well for smaller Redfin on small Deep Divers, Ice Jigs and Soft Plastics, you will need to work hard and put the time in to get the bigger fish. A few Yellowbelly on Jackal T/N 60's, dark colours in the Main Western Channel at Middle Road area, and huge numbers of small Redfin with the occasional keeper size fish on worms and small yabbies in the outlet channels towards Tatura and Kyabram, focus on the structures such as bridges and Drop Bars. For a litrtle bit of fun, there are plenty of big Carp in all the little channels the feed off the mains, great fun for the kids and us on light gear, best method in lightest sinker you can use, cast near the edgers of the banks, size 6 hooks and the humble worm, Nathalia Crawlers.

Another great report from Colby at Mansfield, keep them coming, thanks mate;

The long weekend has brought a solid amount of good fish for lake Eildon, however lake Nillahcootie has been surprisingly quite for the past week. Eildon has supplied some really nice Murray cod with a couple being caught on the slow troll with spinner baits and deep divers reaching up to the 76cm mark, there has also been a few caught on yabbies and worms ranging from 30cm to 68cm with young cod whisperer Tom Dunstan from Mansfield landing the 68cm on a worm off the back of a house boat just around the Eildon wall, There has also been a few getting caught at the wall off the bank with cheese, yabbies and scrubbies all doing the job. Redfin are still going off with plenty getting caught on pearl white Samaki vibes, mask vibes, Zerek fish traps and scrubbies, the reddies are playing hard to get but If you work the trees you will soon find a good school and be kept busy if your lucky you may even get a yella with a few getting caught in amongst the reddies.
Cheers Colby Croxford-Demasi

With the water cooling there has been some absolute horses caught in the last week or so, Brother Anthony and Shane catching a few in the River on a mixture of Surface Lures such as Luckycraft Rats and Zerek Stalkers. Mulwala is fishing well right throuh to Bunderlong and up the Ovens River, Jackal Ganterels, Storm RIP Shad plastics, Bassman 4X4 Spinnerbaits and Mumblers and Jackal Mega Pomperdores, Mudeye Paddlers and Codger Surface lures all working well, a lot of fish around 60cm to 80cm with the occasional horse amoungst them, one report was a young fellow,we won't mention names, snagged his surface lure, after some time of pulling and flicking to try top get it off, a huge mouth popped up and grabbed the lure, snapped the branch, and due the the rubbing o the branch on the leader, won the battle and scored himself some jewellery! 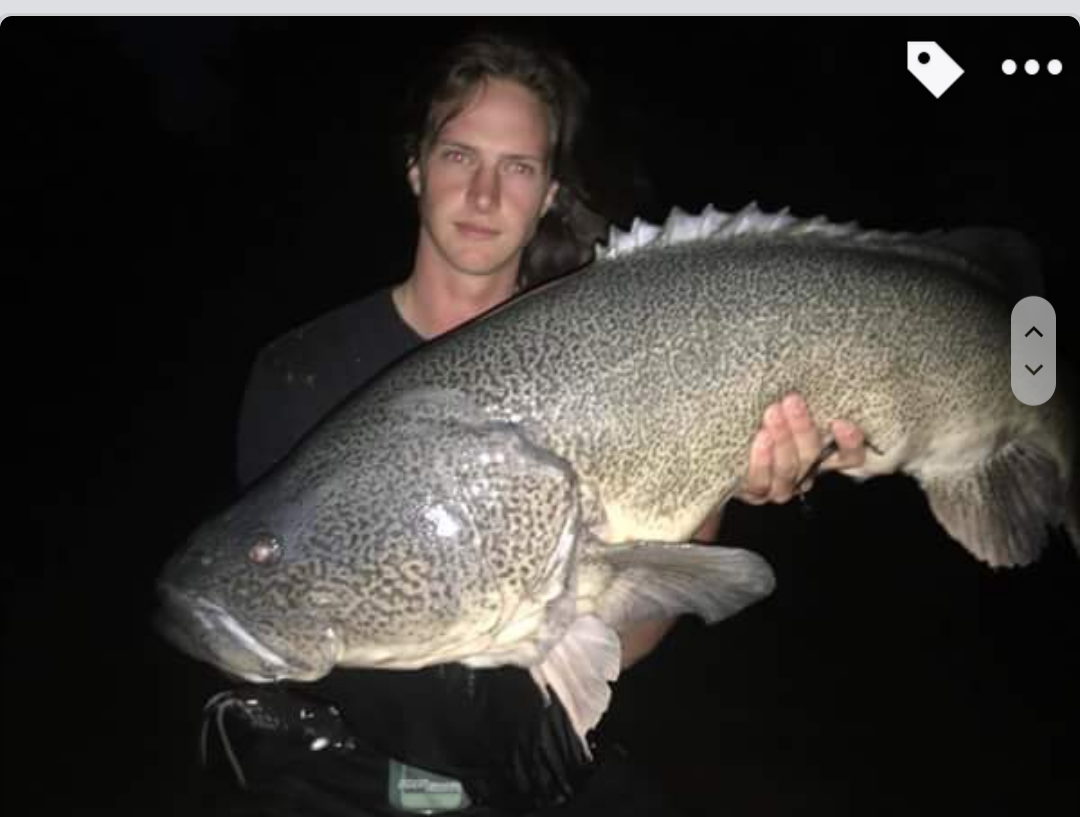 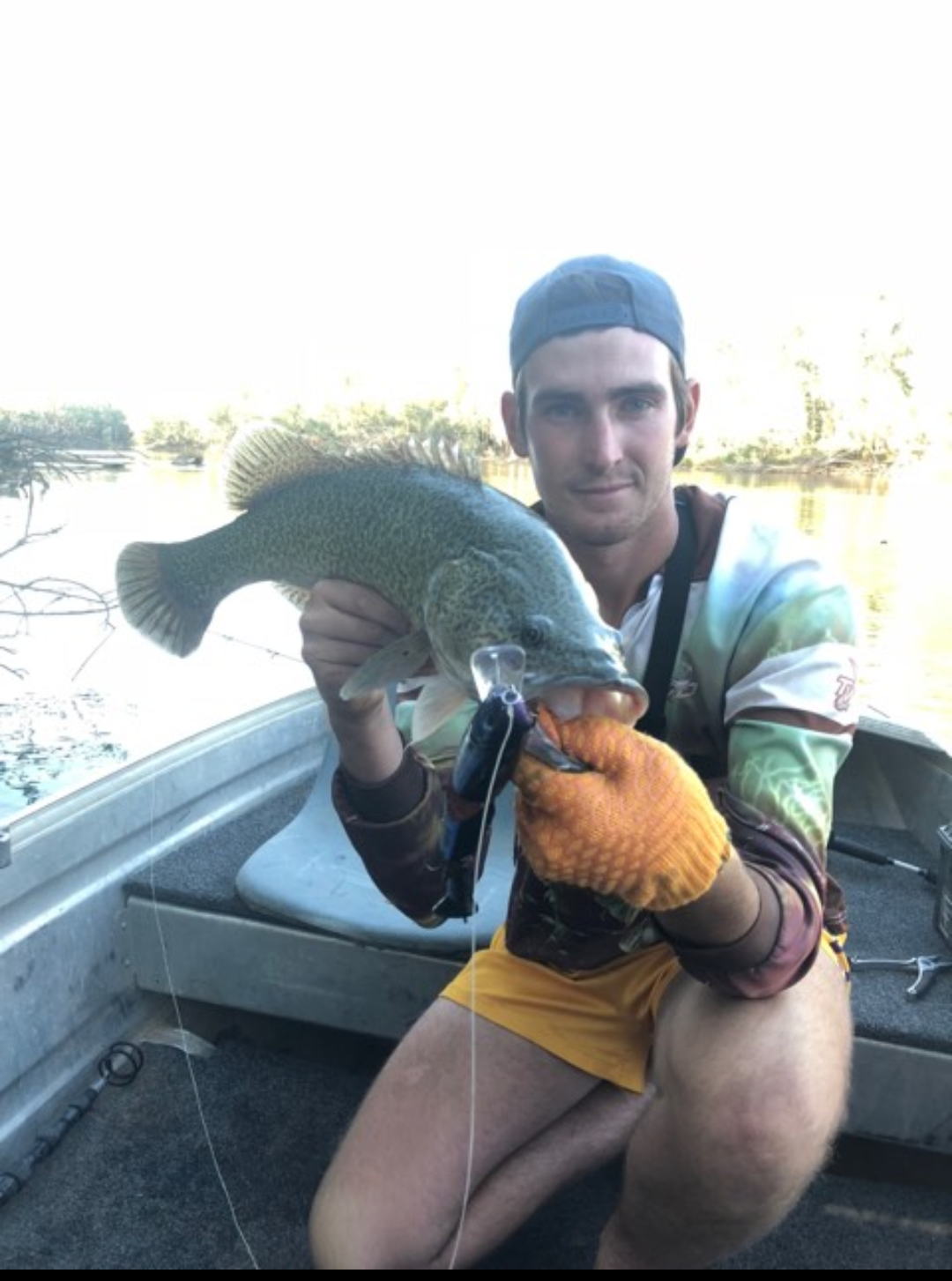 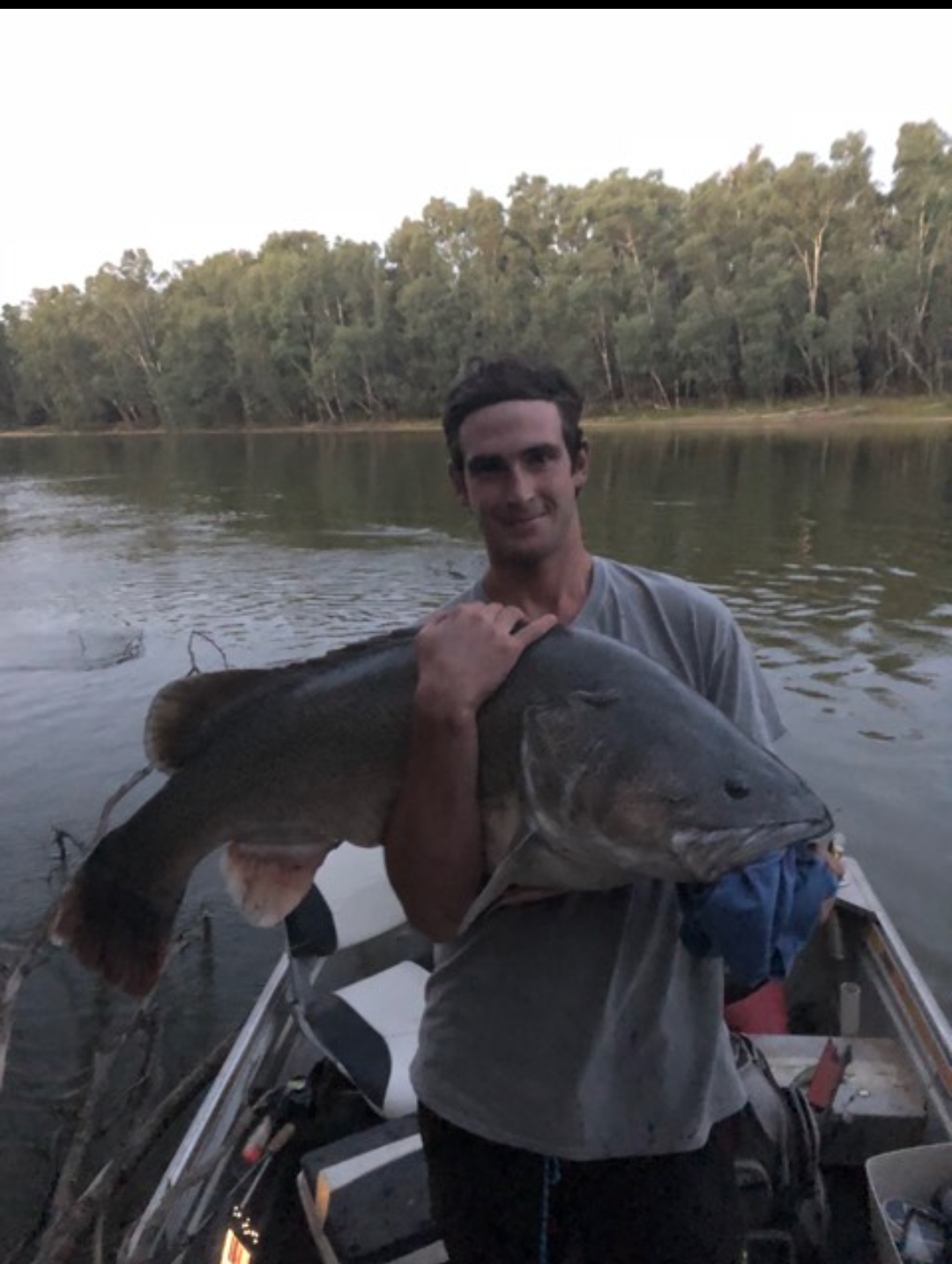 Hi when is the next fishing report going
To be posted ?