Anglers only had to venture down to the Geelong Waterfront to get stuck into some piscatorial action. Pinkie snapper to 45cm started to school up in large numbers around any structure in deeper water. Casting out soft plastics was ideal with gulp 3” minnow very effective. The odd large flathead was also taken as a welcome by catch. 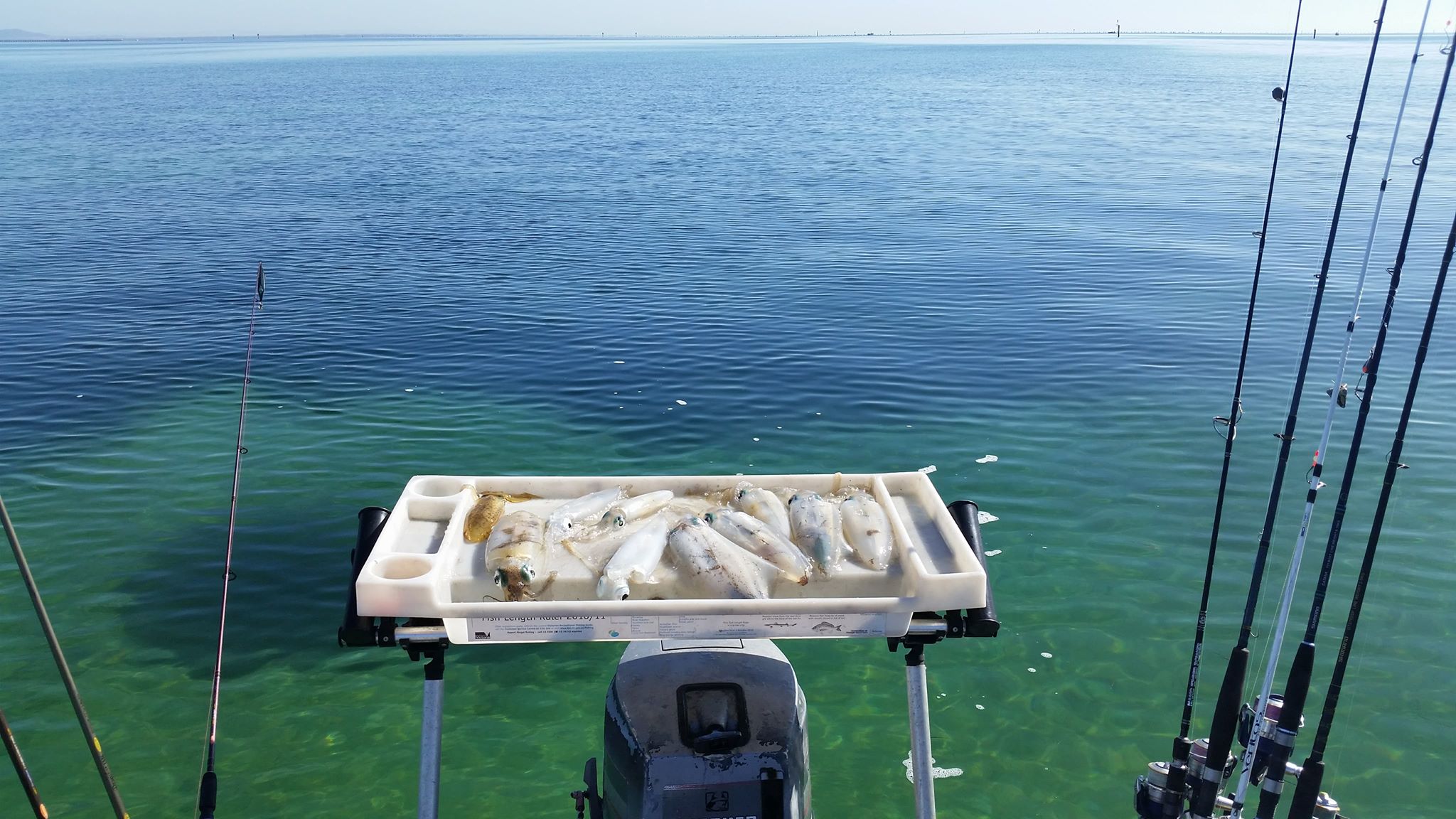 
Whiting continued to be patchy along the whole Bellarine Peninsular but St Leonard’s still produced some quality fish to over 40cm. Squid were in numbers around St Leonard’s Pier casting size three artificial jigs. Evening saw anglers bank most fish. Daniel boated a trophy snapper off St Leoanrds during the week that tipped the scales at an impressive 9kg. Daniel then went onto catch two more 6kg snapper along with a 5.5kg gummy shark. Indented Heads boat ramp is another great location to have a cast for a squid or two again of an evening. 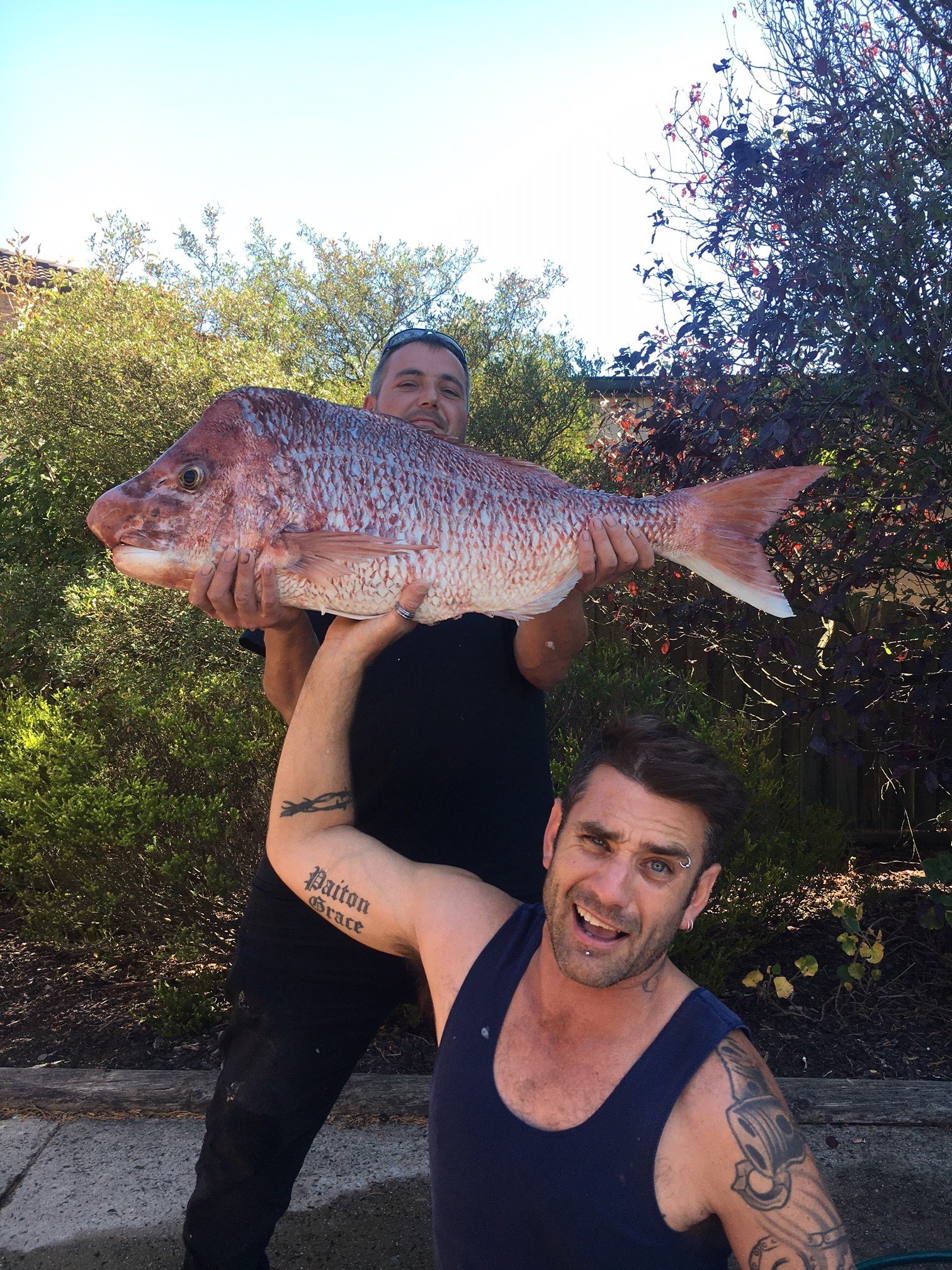 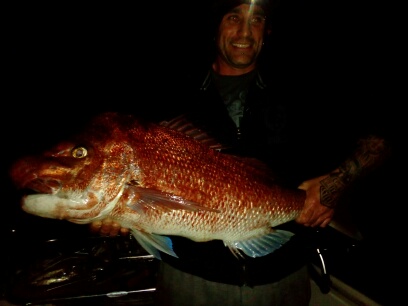 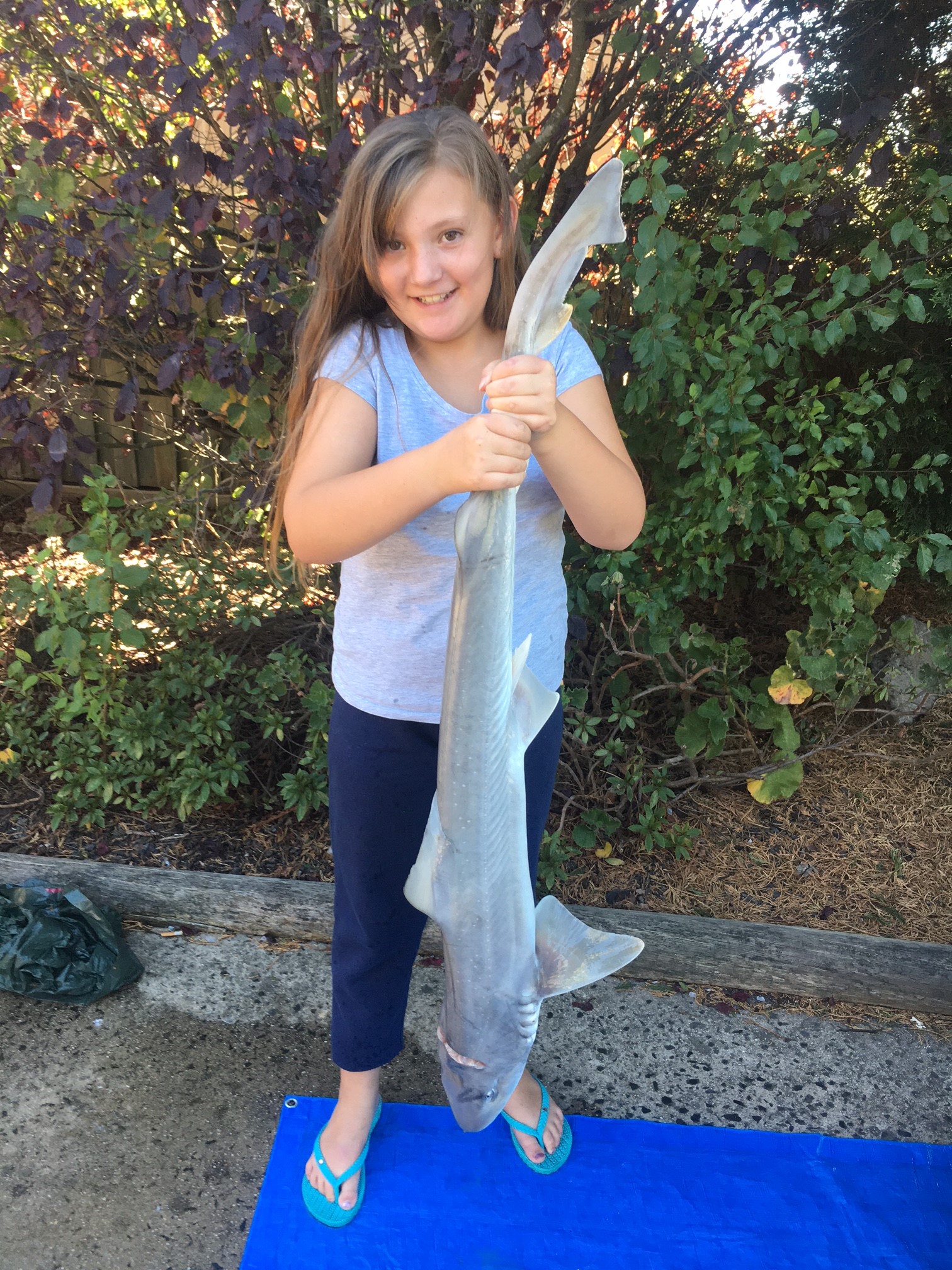 Inside Swan Bay on the run in tide anglers had a ball boating numerous pinkies and flathead. Most tactics produced fish and once a school was located the action was fast paced. Fishing into the night saw anglers tempt gummy shark to 8kg fresh squid strips or salmon fillet was the best bait for this job. Steven and his son had a ripper trip out in Swan Bay snagging some thumping big pinkie snapper and flathead. 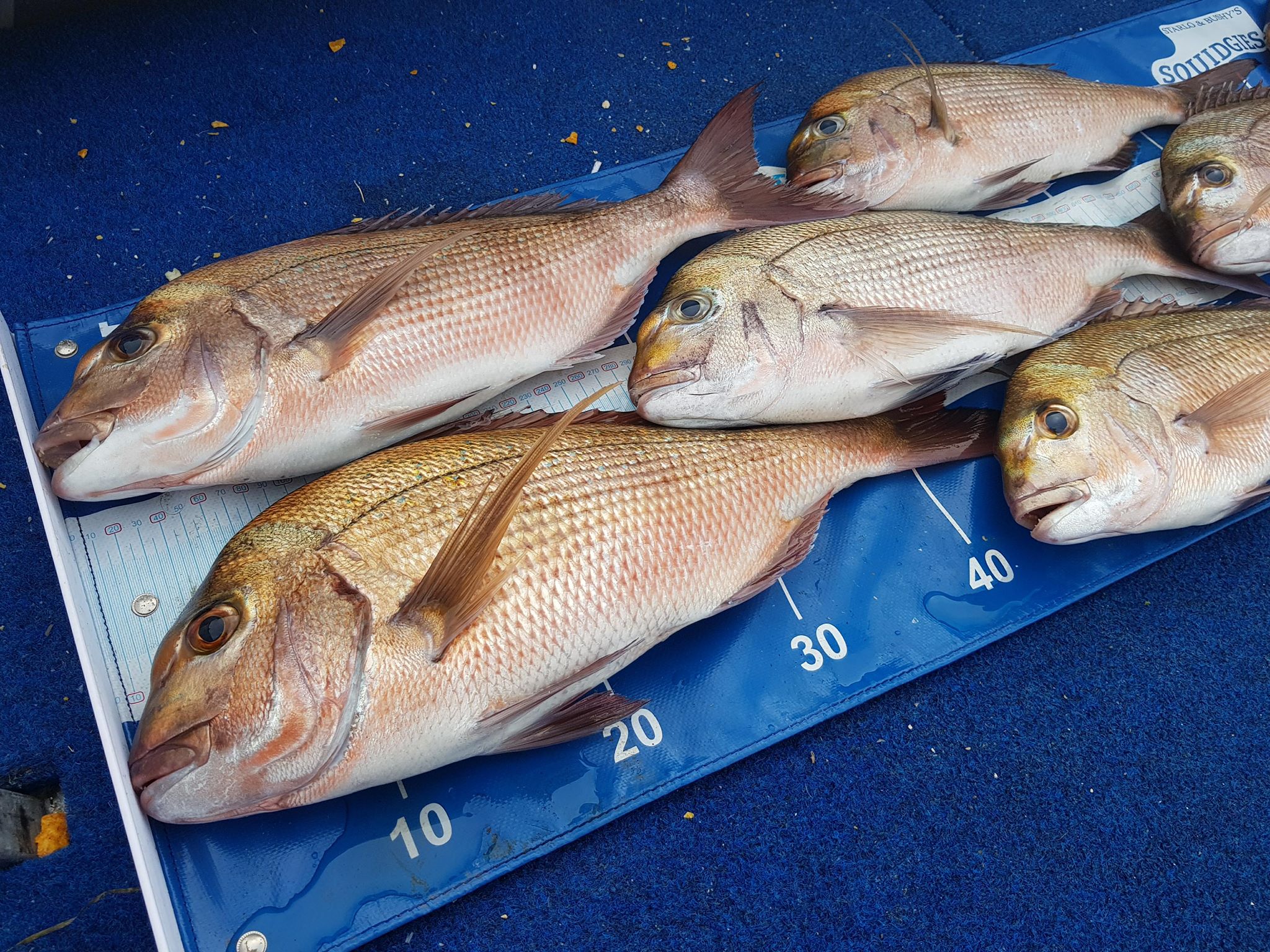 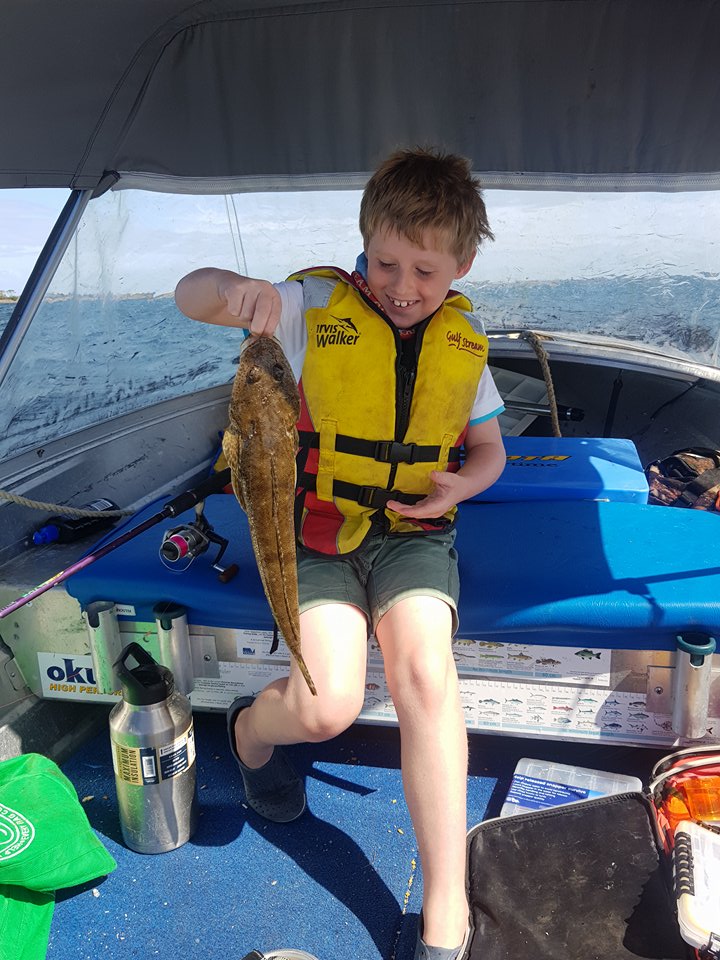 Over at Queenscliff Kingfish still stole the attention of most anglers with the RIP a reliable location. Dropping squid baits down proved effective along with working knife jigs in 150 gram to 200 gram. Australian Salmon still erupted on the surface in a feeding frenzy snapping up most lures that crossed there path.

Offshore from Ocean Grove / Barwon Heads southern Bluefin tuna continued to be taken from a variety of tactics. Trolling white 4.5” ocky skirts around the schools of fish worked extremely well as did casting smaller profile stick baits and soft plastics with again white proving a effective colour. Bait fishing offshore saw anglers find reasonable numbers of pinkie snapper to 50cm with reef sections in 10 to 15 meters of water ideal. Don’t be surprised if a big gummy shark devours your bait as there has been the odd one around.

On the freshwater scene Lake Bullen Merri still dominated reports with chinook salmon on the bite. Again lightly weighted pilchard fillets did the trick. Hopefully the rainbow trout should fire up as we move further into autumn.

Stony Creek was a great place to stretch the legs and go for a walk casting a Tassie devil or spoon type lure with brown trout to just on 1kg hanging around. Monster redfin call Stony creek home but do prove hard to tempt.

The lake of 1000 cast Wurdee Boluc saw increased captures of redfin with soft plastics pitched on a lengthy cast doing the job. Again as the weather cools we should see a trout or two come on the bite.
Redfin remain a solid option in the Barwon River between Breakwater and Queens Park small hard body lures are ideal for this task.

Some good numbers of Cod being caught around Nagambie area, best spot seems to be around the 2 Wineries and down Northwood Road, Trolling Size 1 and 2 in colour 25, Old Mate’s colour 9 and 1, as well as bigger deep divers such as 165mm Coddogs and 130mm White Crows working well, casting Bassman 4x4’s, orange or white at the structure along the bank. Bobbing bait’s such as Shrimp and Worms or 3 to 4 inch soft plastics around the trees is resulting in a few Redfin and Yellowbelly right along the River from the Wineries to the Caravan Park. Kirwans Bridge area is still the highlight, with the cooler nights, surface lures and swimbaits are working really well, work the willow trees and grassy banks with lures or bobbing bait is giving you a great chance of Redfin, Yellowbelly and Cod. Murchison to Toolamba is fishing really well for Cod and Yellowbelly, mainly on Baits such as Scrubworms, Shrimp, Yabbies and Cheese and a few of Bassman, 4D and Pirate Spinnerbaits. Bait fishing has been the preferred method from Shepparton to McCoys Bridge for reasonable number of Cod and Yellowbelly. 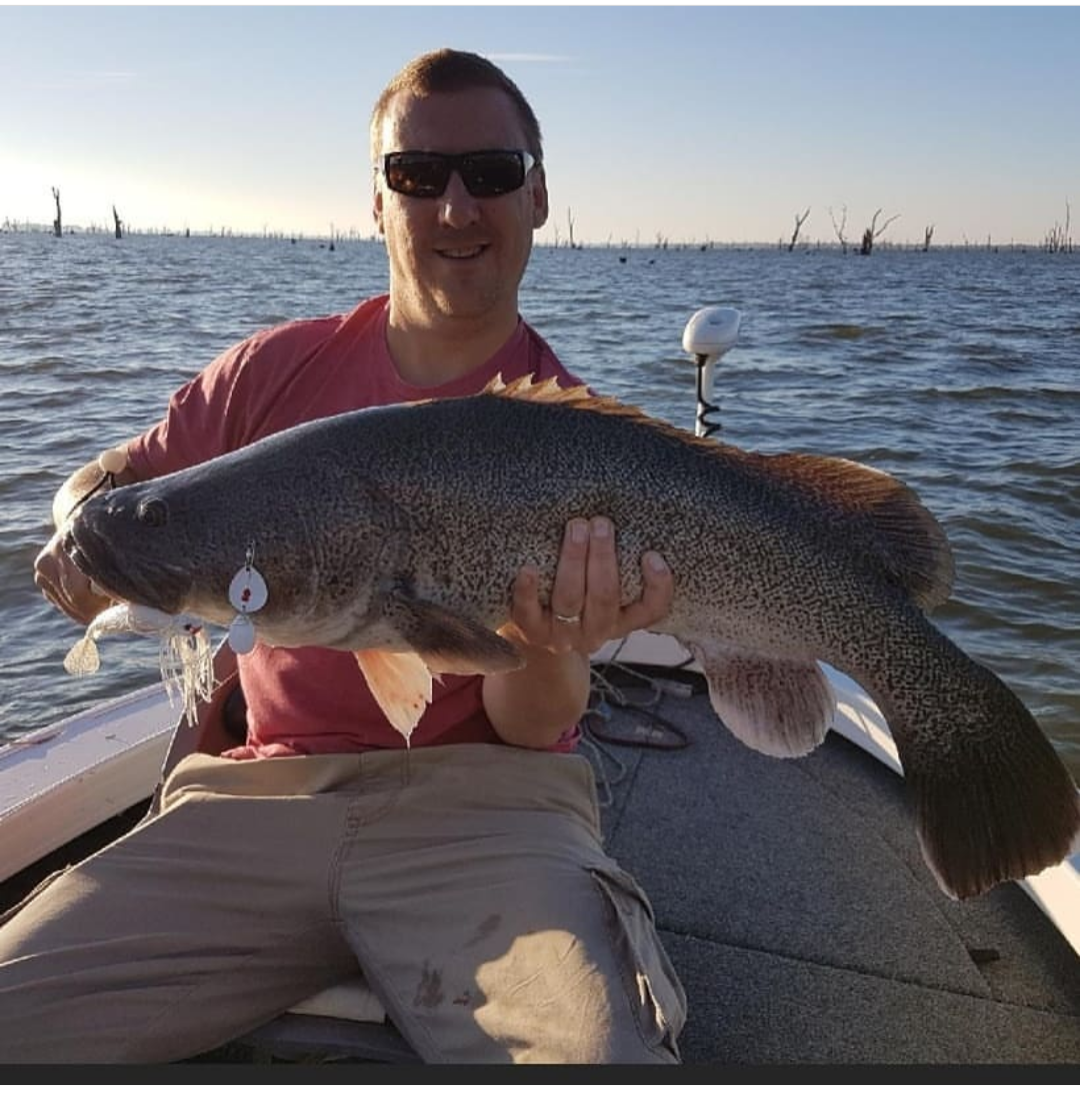 The channels around Waranga Basin are still fishing well, plenty no small Redfin on Worms, great fun for the Kids. Waranga Basin still has big numbers of Redfin being caught, most are small, you do have to work hard to get a good feed, maybe 10 keepers for every 100 caught, trolling RMG Poltergiest 50 in the white, Ghost and Green Balista Smoke 65, Squidgy Slickrigs in Drop Bear and Green Grunter and Bobbing Ice Jigs and Shrimp and small Yabbies still the best method. Using the same methods at Lake Eppalock is working much the same, the Redfin arew a little harder to find, but when you do the results are bigger fish, Mario Rizzeri  having a cracker session last week with good numbers of Good sized Redfin. 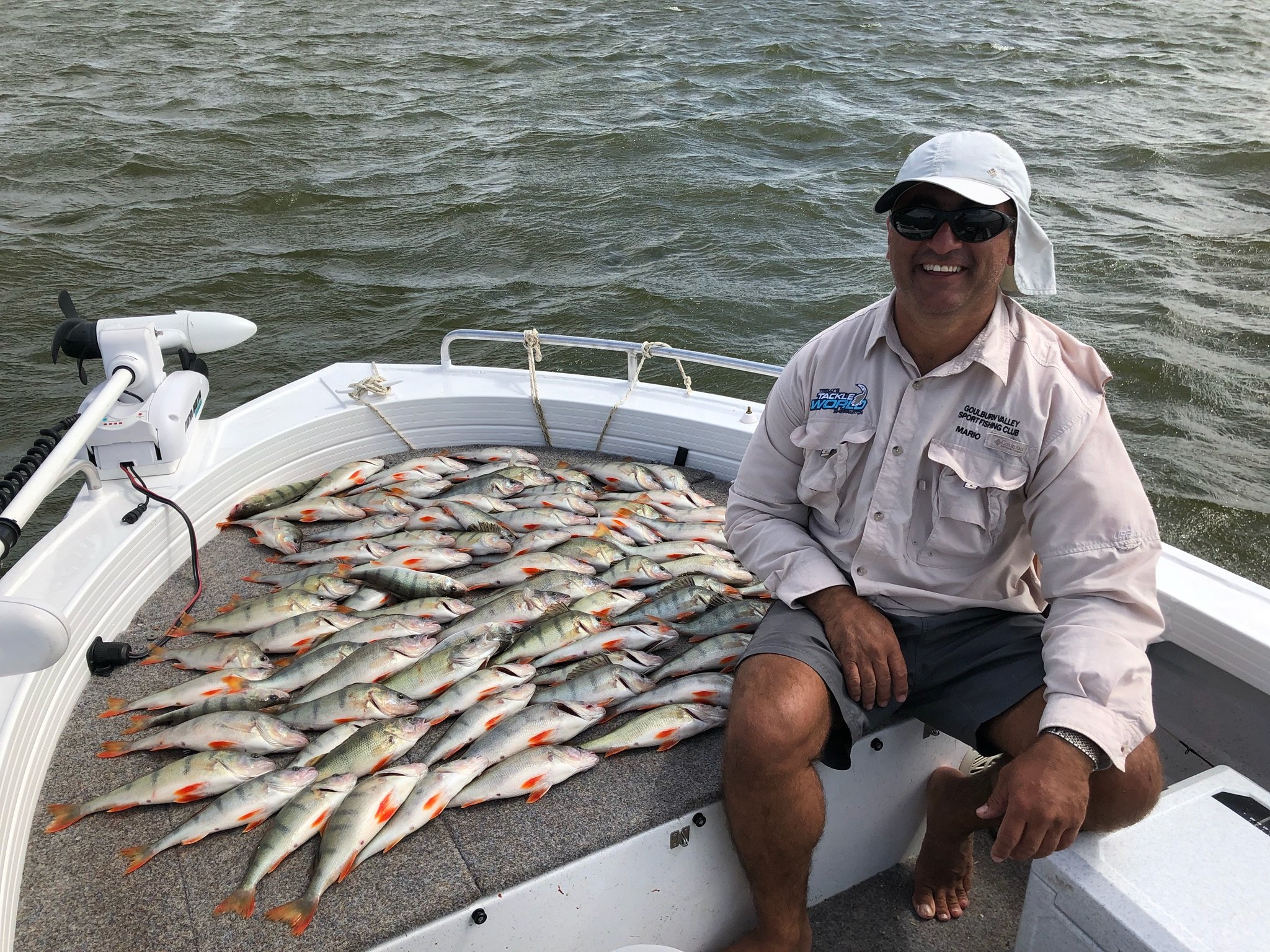 Besides the River, the Main Eastern Channel is still fishing well for Cod, mainly on Bait such as Cheese and the area around the Shepparton/Euroa Road the place to go. A few Redfin on white soft Plastics and Trout on Powerbait under a float in Voctoria Lake, focus on the area from the Grass Hill near Aqua Moves to the Boat Ramp.

Once again got a great little report from Colby at Mansfield, love his work;
Hi Shane, Colby here fishing in lake Eildon has been going quite well, There has been heaps of redfin getting caught around Bonnie Doon in the Brankeet arm and in the burnt creek inlet just off the Delatite arm, they have been taking a liking to anything white with the white Sakami soft plastics getting them every cast, Murray cod and yellow belly have been a bit quite due to the challenging conditions but there has been a few being caught on the dam wall near the Alliance boat ramp using scrubbies and yabbies. A nice 60 cm Murray cod was caught trolling a black and gold stump jumper and there has been some small yella's being caught on Australian crafted lures on the troll near Goughs bay, Nillahcootie on the other hand has had a little bit of activity with a nice 65cm cod getting caught on cheese and some small yellow belly and cod getting caught with lures on the troll in the main arm not to far from the bank.
That's all from this week cheers Colby

Things are really starting to pick up with the cooler weather, big Cod and big numbers of good sized Yellowbelly are being caught anywhere from Torrumbarry to Bunderlong, big surface lures, even during the day, Bassman, 4D and Pirate Spinnerbaits and Jackal Swimbaits are starting to work well in the Ovens near Bundelong. Trolling Old Mate’s, Codgers and Stumjumpers are working well Cobram to Yarrawonga, Bait fishing Berri producing good numbers of Cod and Yellowbelly also. Spinnertbaits and Surface fishing has picked up at Mulwala also, great sign for thing to come. Matt Walker got a 62cm Cod on a Codger around Berri, Steve Cannon  and His wife having success in the His and Hers Comp at Mulwala using 4D ¾ oz white double Colorado spinnerbaits. 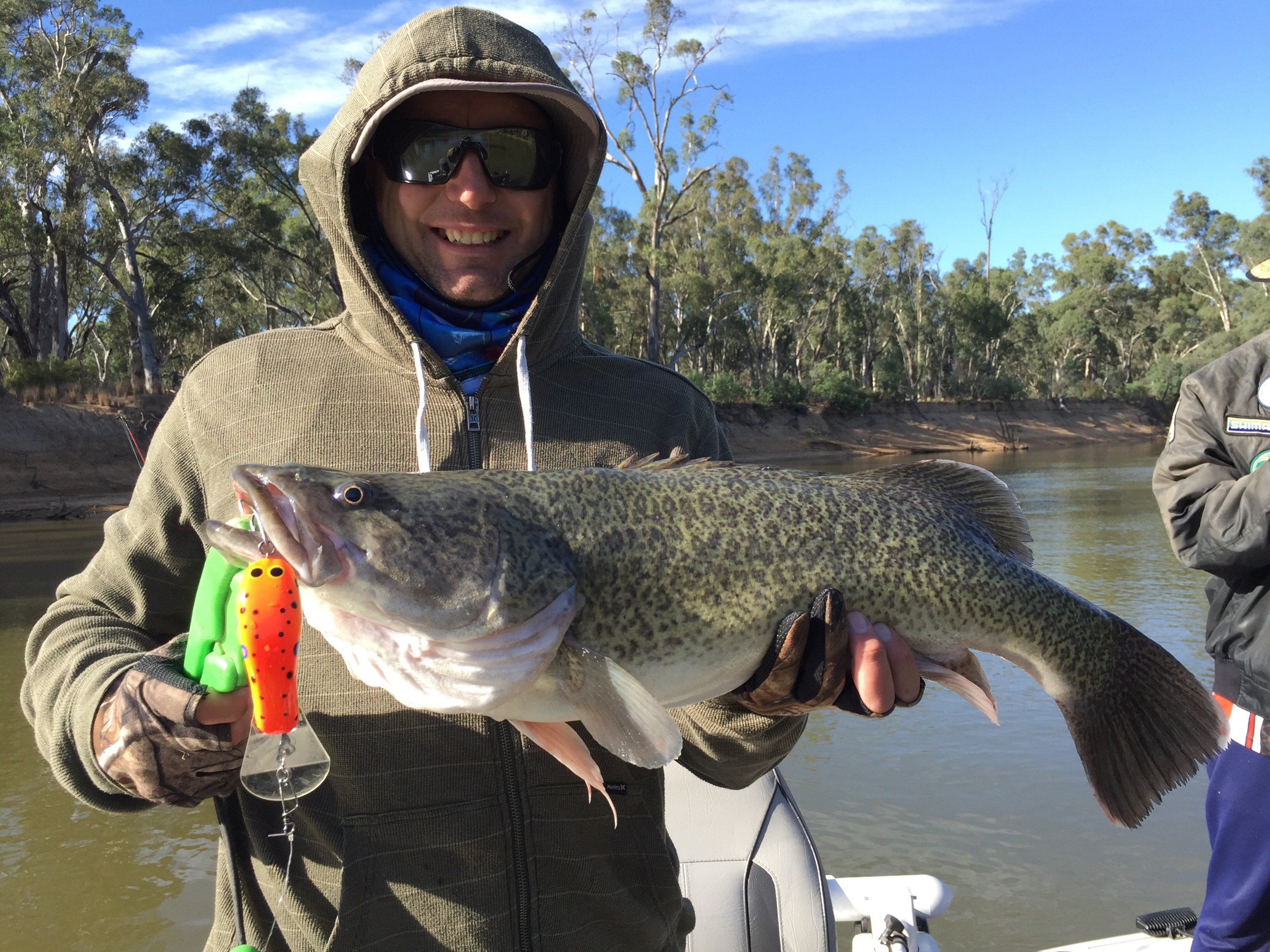