Heading out of Clifton Springs and motoring down towards Leopold the spoil grounds were ideal for those casting soft plastics with pinkie snapper and flathead in great numbers. On the edge of the spoil grounds anglers bumped into reasonable numbers of King George whiting with running sinker rig baited with pippie doing the trick nicely.

Indented Heads saw those fishing in five to six meters of water find a mixed bag of whiting and squid amongst the reefy sections. Heading out to deeper water and gummy shark to 8kg were devouring baits of fresh squid and pilchard. A strong berley trail helped lure in the gummy shark.

Over at Queenscliff anglers found the main pier to still be producing great quality squid. Fishing of an evening was better but there was squid to be caught during the day. The harbour was another great land based location for silver trevally, whiting and Australian salmon. The run in tide fished best with a paternoster rig baited with pilchard fillet the best. The RIP was kingfish central seeing huge models takien almost daily when the weather allowed. Knife jigging and live bait again proved the number one tactic when chasing kingfish.  Large schools of surface feeding Australian Salmon still kept anglers entertained when the kingfish were playing hard to get.

Heading down the coast and the surf fishing was on fire with Australian Salmon to 2.5kg hitting the beaches and rock platforms. Casting lures was ideal but bait fishing with squid or blue bait also resulted in salmon. Fishing into the night anglers beached gummy shark too with the average size about one meter long.

Peri Stavropoulos travelled back down to the Otway streams chasing wild brown trout on fly. Peri managed to land a ripper brown trout in stunning condition.

Lake Bullen Merri still has fantastic numbers of Chinook salmon on the go. Trolling with down riggers has started to become abet more effective with the larger model salmon responding well to Rapala F-7 used in conjunction with a down rigger. Fishing pilchard fillet is still a safe bet in getting numbers of fish.

Wurdee Boluc has seen increased captures in redfin for those making long casts with spoon type lures. Over the next few weeks the redfin should really start to come on the chew.

Stony Creek up past Anakie is consistent for brown trout to about 1kg, most effective lure has been a 13.5 gram Tassie devil in #55. Some surprisingly big redfin have also been banked for a few lucky anglers.

The Seymour area is starting to clear up and towards Nagambie also, both areas are fishing ok for Cod, Redfin and the occasional Yellowbelly. Cod are being caught trolling Size 1 Stumpjumpers and 85mm Codgers and the best bait has been Bardi Grubs and Scrubworms, Redfin are taking bright coloured small Hardbodies trolling the edges of the River or Worms and small Yabbies. The Yellowbelly have been caught bobbing Worms around the bases of the big trees along the deep banks from Chinaman’s Bridge to Tahbilk Winery. Further north to the Kirwans Bride area is still fishing quite well, early mornings and late afternoons till dark the best time, Bardi Grubs, Scrubworms and shrimp the best bait for Cod, Surface lures such as Jackal Pompadours and Bassman Spinnerbaits working well also. Yellowbelly and Redfin are mainly caught using worms and small yabbies and shrimp, mainly around the willow trees, you might need to try a few spots to find them. Murchison to Arcadia is probably the best part of the Goulburn in our region for Cod at the moment, the rivert is still running high and will do until after Easter with the Interstate Water Transfer going on, but fishing well, bait fishing with Bardi Grubs is the standout, Scrubworms working well also, try the Cable Hole area along Morningside Road and Cemetery Bend area or any of the tracks down to the River opposite Kiota Road around Toolamba. Pro Staffer Graeme fished at Arcadia during the Week, catching 22 fish in a short period on Bardi Grubs and Bassman Spinnerbaits, most fish Undersize, but did mana.ge some fish over 60cm Shepparton to Undera is still hard work, a lot of cast between fish, bait fishing with Bardi Grubs and Scrubworms should see you catch a few Cod, mostly small, but the occasional 55cm plus fish amongst them.

Waranga Basin is still the place to be for a goods feed of Redfin, sounding up the schools or finding them with deep diving small hardbodies, then bobbing either worms or Ice Jigs on the schools. The channels from the Basin to Kyabram are still fishing well, Jackal T/N 60’s in the main western channel in the Middle Road area working well for good sized Yellowbelly, and Hogbacks and worms catching plenty of Redfin in most of the other channels in the region.

The Main Eastern Channel from the Euroa/Shepparton Road is good for Cod, mainly on bait such as Bardi Grubs, Scrubworms and Cheese. Plenty of good sized Yellowbelly on Jackal T/N 60’s in the Kialla Lakes, Greens and Dark colours working the best. Soft plastics are producing Redfin in Victoria Lake from the Grass hill to the boat Ramp.

Lake Mulwala is fishing really well, either trolling 2-3 metre divers or casting Jackal Gigantrels or Koolabung Surface lures should result in some nice fish, quite a few fish over 1 meter lately. Reece Nicholas caught a nice sized 64cm Cod on the Mega Pompadours at Bunderlong over the weekend, missed a few also. Trolling Old Mate and Codger Hardbodies in bright colours a at Cobrawonga (Cobram to Yarrawonga) has resulted in plenty of nice sized Cod and the occasional Yellowbelly. Berri fishing well, plenty of good sized Cod on Bassman 4X4’s and Big Shallow Hardbodies such as 110mm White Crow’s in 3 mtr Divers.

Shane Bergamin (PIctured below) and his brother setting there new PB, both with fish over a metre this week! This one caught on the Live Target: Field Mouse 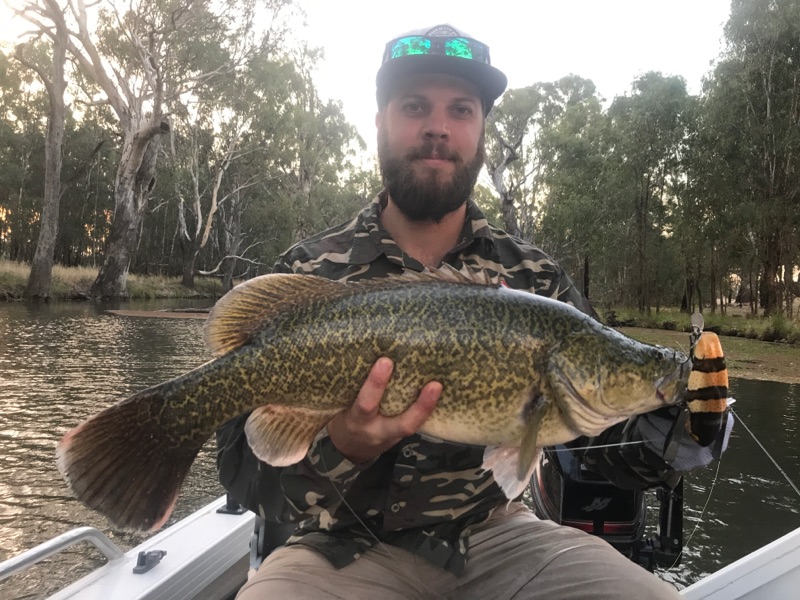 Pro Staffer Pip Clement had a cracking weekend away with Rod Mckenzie catching some monster Cod up north somewhere? Probably a hatchery?? But all seriousness it was in the Western part of the system and is showing that after the Black Water event a while ago, things are starting to come back.
Peter Case caught his pb Barra last week in the Territory with a 94cm silver beast. 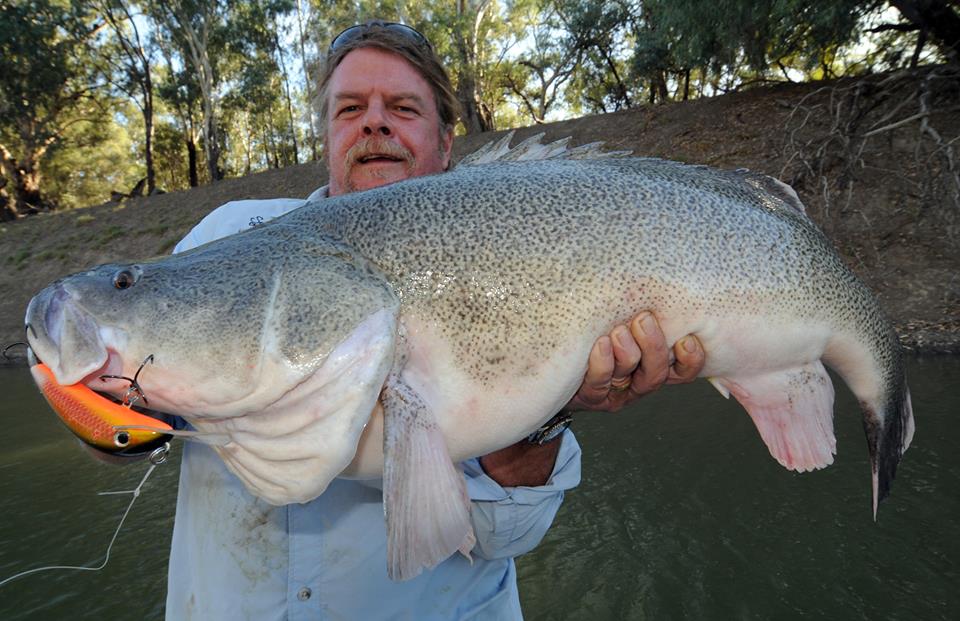