Starting off inside Corio Bay anglers had no trouble in finding good numbers of flathead drifting over the spoil grounds out from Lime burner’s boat ramp. Casting Gulp Turtleback worm soft plastics numerous flathead to over 45cm in length hit the deck. The odd large pike also featured amongst anglers bags along with pinkie snapper.

On the outer Harbor Clifton Springs remained a solid option for squid with the Curlewis Bank holding excellent numbers. A key to success was making sure the water clarity was high. Whiting were sitting deeper in 6 to 7 meters of water and mussel or pippe worked as bait.

The Swan Bay channel on a run in tide was a hot spot for a mixed bag. Trevally, whiting, salmon, flathead, pike and gummy shark were all on offer. The trick is to find a time the weed is not fowling up your line, the run in tide is most likely your best time to fish.

Over at Queenscliff the Pier is fishing very well for squid, Trelly’s Geelong Peri Stavropoulos bagged himself a great speciesism one evening last week casting artificial jigs. The Harbour still has good numbers of silver trevally for those working soft plastics on slack tide. The grass beds to the east of the Harbor entrance have been a little hit and miss for whiting but when on, they are producing fish to 45cm in length. The RIP is showing no signs of slowing down for Kingfish. Knife jigs, live bait and trolled lures all accounted for fish to 10kg. 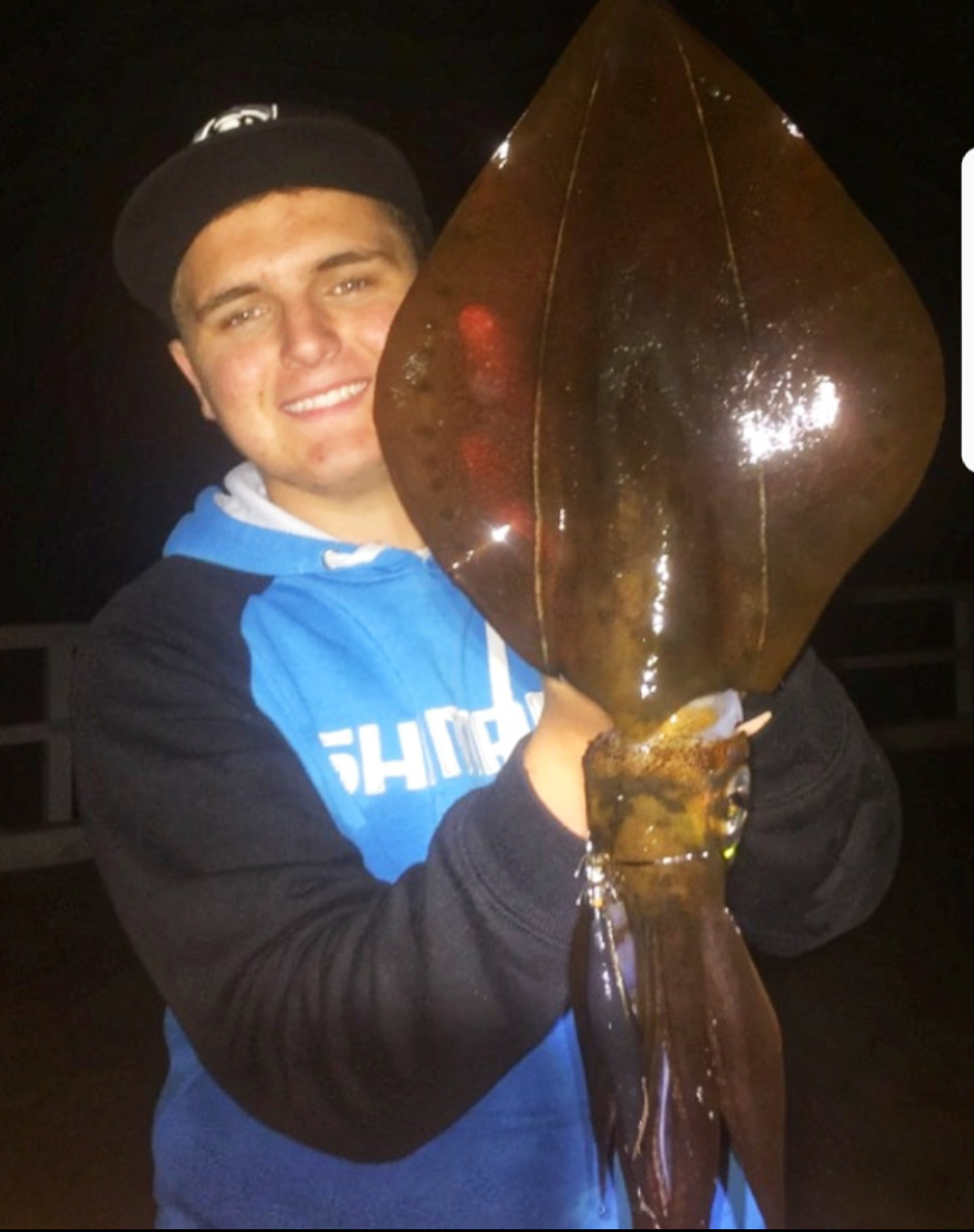 Out from Barwon Heads anglers again encountered kingfish, looking for birds working schools of baitfish was key in locating fish. Casting a stick bait into commotion was ideal tactic.

Surf anglers found Australian Salmon snapper up baits and lures along the coast. Bancoora Beach was a hot spot but the rock platforms either side of Lorne also produced fish. Twenty five to thirty gram lures were ideal and best baits were pilchard fillet or blue bait.

On the freshwater scene the Crater Lakes are not showing any sign of slowing down. Bullen Merri has large numbers of Chinook salmon, they are responding well to lures trolled down 35ft. Bait fishing with light weighted pilchard fillet amongst a strong berley trail is the best tactic account for salmon to 2kg.
Next door Lake Purrumbete is at times giving up the odd trophy brown trout but remain consistent for rainbow trout and redfin.

The lake of 1000 cast Wurdee Boluc has flown under the radar but is giving up the occasional big redfin for those using spoon type lures.

The Barwon River saw the redfin really fire up and keen on hitting small hard body lures in red colours. The monster carp are still there for those fishing corn kernels on a running sinker rig.

A few Cod being caught around the back of the POW pub along Emily Street in Seymour, Bassman Spinnerbaits and Cheese and Scrubworms. Some nice Cod around the Horse Studs along Northwood Road towards Nagambie. Kirwans Bridge area is still a standout with plenty of Yellowbelly bobbing worms and shrimp around the trees and some Cod on Spinnerbaits and Size 1 Stumpjumpers. Some Redfin on Shrimp, small Yabbies and Worms around Kirwins also. The River below the Weir is starting to look good, still o0n the drop, but easing so definitely worth a fish, try around Murchison and Toolamba. Some nice sized Cod on Bardi Grubs and Cheese around the Rafety’s road through to the Boulevard. Some nice Cod and Yellowbelly around Undera, Purple Codgers abd 4X4 Bassman spinnerbaits working well and Bardi Grubs, Shrimp and Scrubworms the best bait.

Waranga Basin still fishing well, plenty of Redfin on the troll using Size 3 Stumpjumpers and Halco 50 Poltergeist in the White, Red or Gold. There has been a few good Sized Cod caught lately, so worth throwing out a Size 1 Stumpjumper every now and then, especially around the Wall side. All the channels are fishing well for Redfin and a few Yellowbelly in the main one’s. Some nice Yellowbelly and Cod on Old Mate and Bassman Spinnerbaits in the Campaspe River at Rochester.

Tim Carter from Halco and Dave and Gaye Silva from Wilson had a cracker trip to Lake Mulwala, catching plenty of Cod on Lures, Bassman Spinnerbaits and Halco Poltergeist 80's the standout lures. 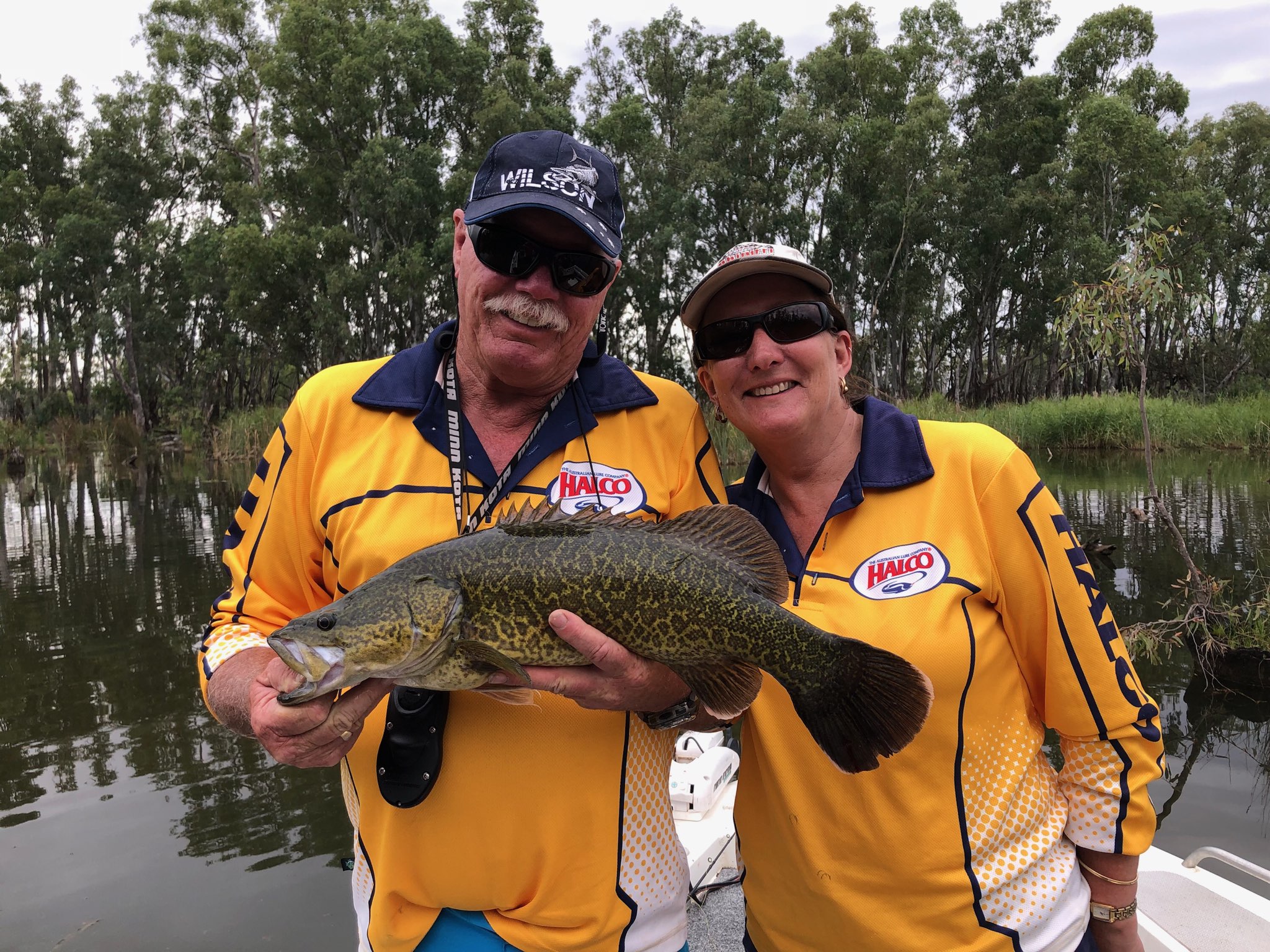 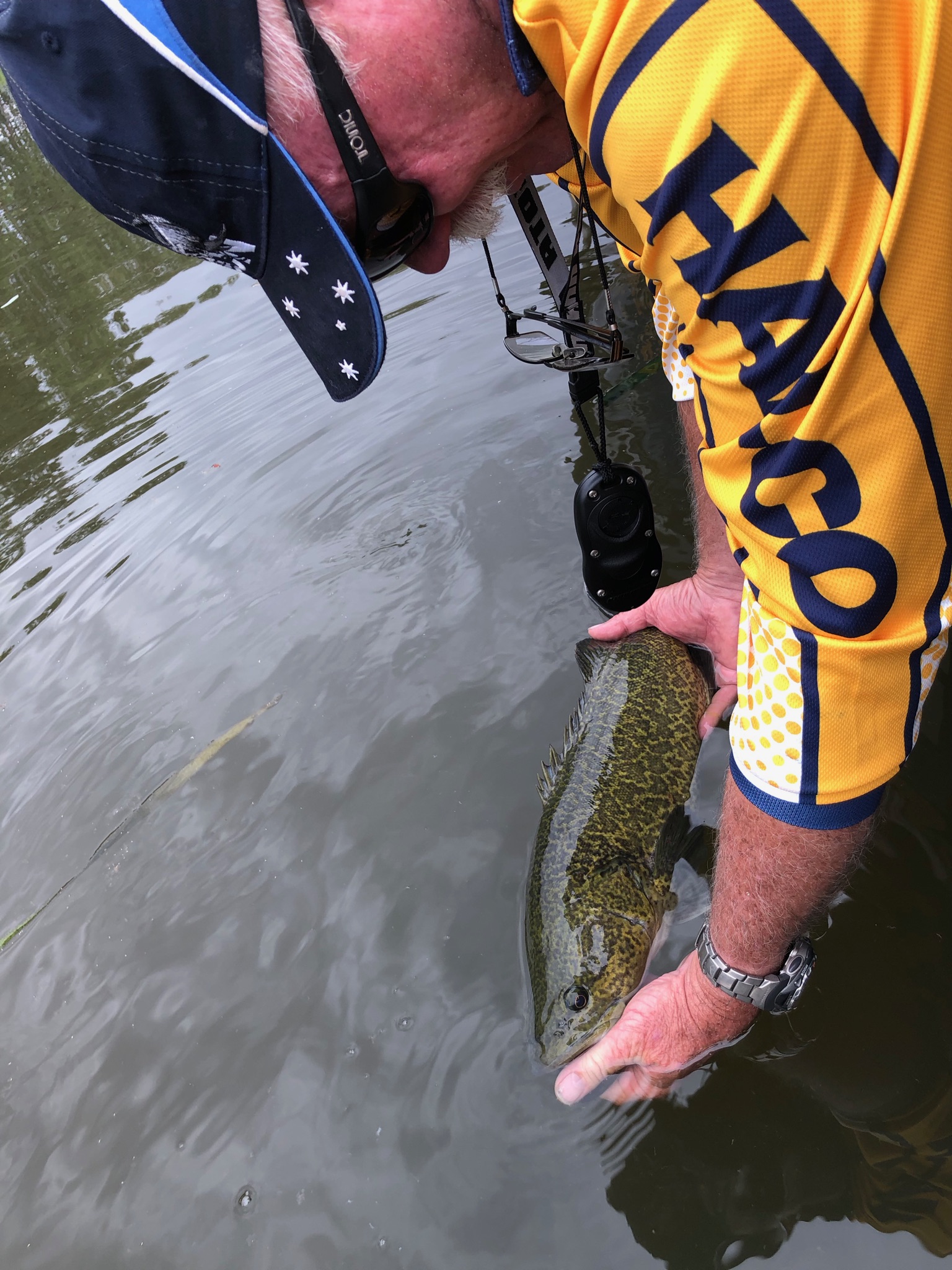 Kialla Lakes is fishing well for Yellowbelly on Jackal T/N 60’s. A few Trout and Redfin on fly in Victoria Lake as well as some nice sized Redfin on Soft Plastics anywhere from the Grass Hill  to the Boat Ramp. The Main Eastern Channel around Invergorden to Wahring is fishing well with bait for Cod, Scrubworms, Cheese and Bardi Grubs the standout.

LAKE EILDON- I had this sent to me from one of our young guns from Mansfeild; I have heard a few different people saying they have been getting multiply boof's on the surface however not hooking up to many fish in Nillahcootie. Eildon however is going reasonably well with the redfin going off around the trees and being caught on yabbies, scrubbies, soft plastics and small hard bodies. There has been some medium sized cod getting caught around the Eildon wall on spinnerbaits and hard bodies right on dusk and a couple being caught on surface lures like the pompadour. There has been some small rainbow trout being caught in the big river arm on scrubbies. The yella's have been pretty quite in Nillahcootie and Eildon lately but hopefully they get going soon. The Eildon pondage is also teaming with trout as always with some nice brown trout being caught on power bait and mud eyes with the fish ranging from 4 to 9lb, There has also been some nice small rainbow trout being caught on power bait. Cheers Colby.

DENILIQUIN- Pro Staffer Shane fished the Deni Comp with his Family and a few shop regulars, working really hard to catching a few small Cod, the standout lure was the Bassman 4X4 in Orange, basically the only lure that caught fish for them, the winning fish was a staggering 122cm, junior winner 119cm, female winner 92cm with another 116cm caught and numerous fish over 80cm caught over the 2 days, great weekend away with great results.

Next week those looking to wet a line keep an eye on the RIP and chase a kingfish or two. Just remember to adhere to all safety and boating regulations. The Barwon Estuary should see elephant fish make an appearance. Walking the banks of the Barwon River is perfect for a redfin casting hardbody lures.
Share Share on Facebook Tweet Tweet on Twitter Pin it Pin on Pinterest
Trellys Victorian Fishing Report
Loading