Starting off at Clifton Springs anglers found a quality mixed bag of flathead, pinkies, pike and whiting. The Curlewis Bank was on fire producing most of the species mentioned above but what was great to see was the quality of the fish with flathead to over 50cm on the chew. Fishing near the mussel beds at Clifton Springs was also a great option with again some thumping big flathead and whiting snapping up baits.

Indented Heads to St Leonard’s over the reef / weed patches was ideal for squid. Casting artificial jigs worked with bag limit captures possible. Of a night when the weather allowed the Indented Heads Boat ramp jetty was a hot spot for squid.  Bourke St (the section of water just out from St Leonard’s yacht club) produced some nice sized whiting to 40cm. Pippie or tenderised squid was the bait of choice. Out in the deeper water Gummy Shark to 6kg were about with fresh squid bait or pilchard doing the trick. The Swan Bay channel on the run in tide of an evening was also another Gummy Shark producing location during the week.

The RIP saw some seriously big kingfish taken either live baiting or jigging with knife jigs. Kingfish to over 1 meter long were about. Huge Australian Salmon still erupted on the surface in a feeding frenzy taking lures indented for a kingfish or tuna. Chris from Gone Fishing Charters guide his clients onto some outstanding Kingfish and Tuna in the RIP during the past week. 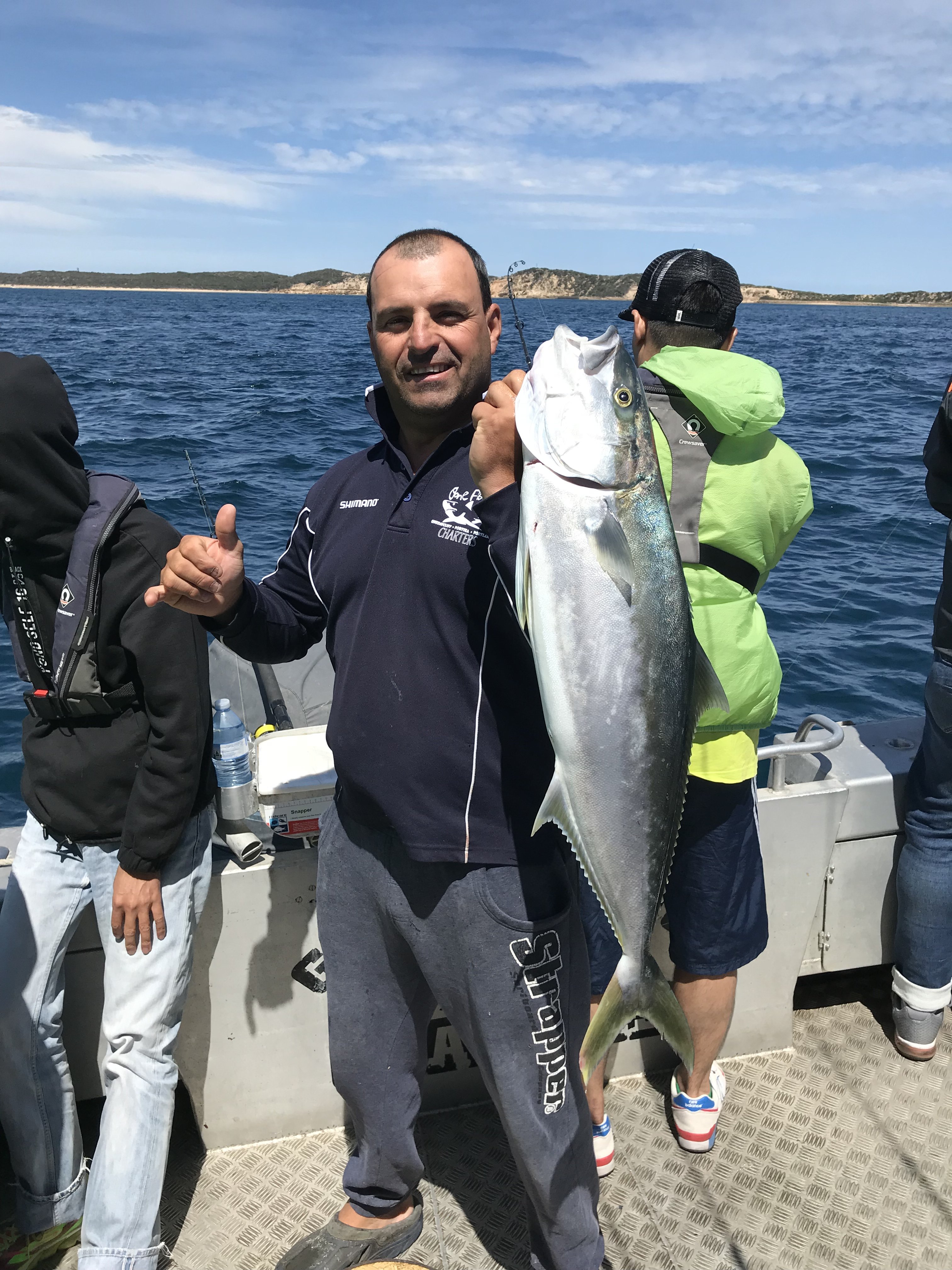 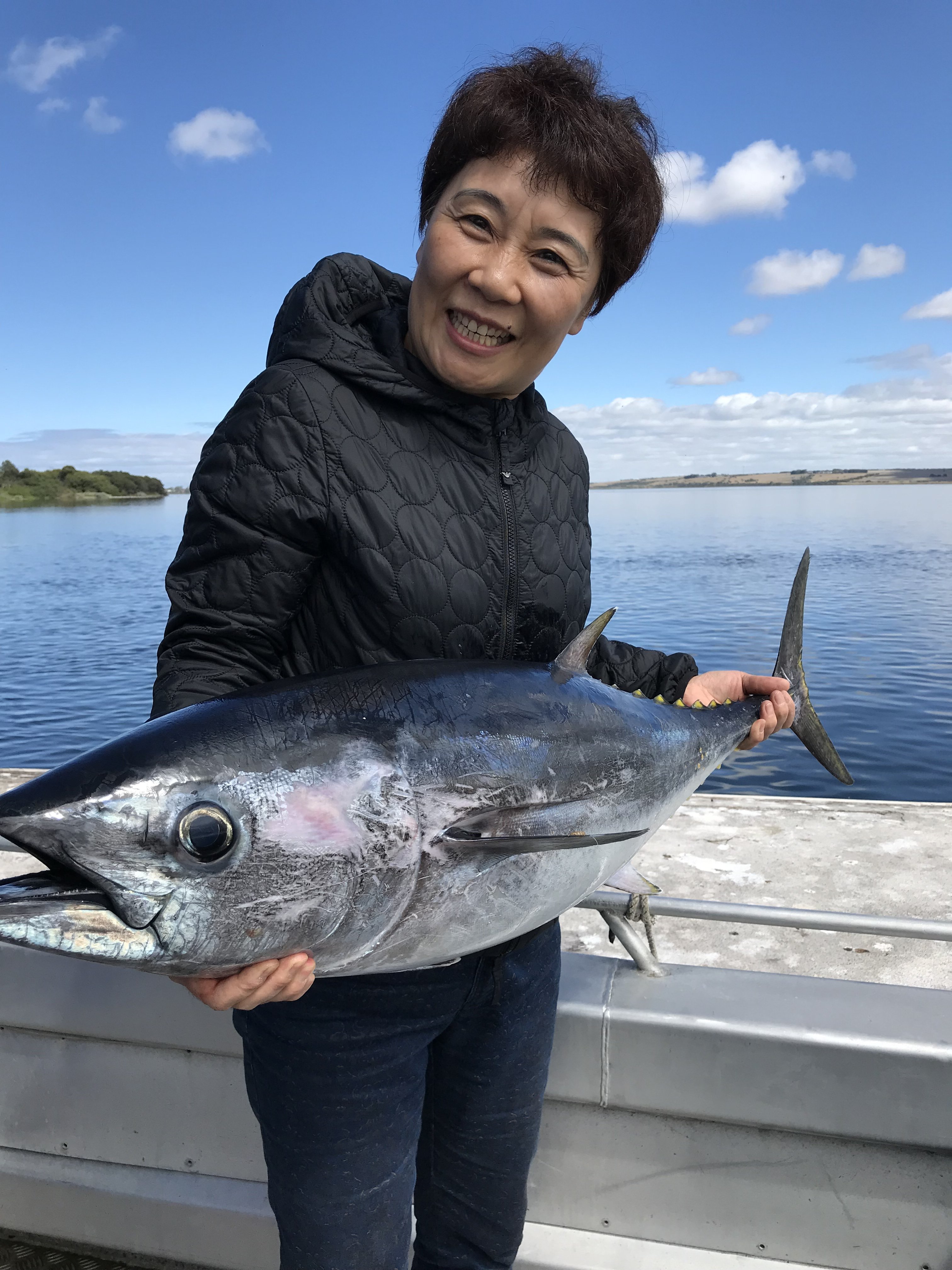 Offshore the back of Point Lonsdale to Barwon Heads saw anglers tangle with Kingfish averaging about 6kg in weight. Offshore trolling white ocky skirts with a squid strip on the end in a great way to cover ground and find feeding fish.

The Barwon Estuary was a great place to fish land based with lots of smaller model Australian Salmon, whiting and mullet all keen on devouring prawn on a running sinker rig. Mulloway were about for anglers prepared to play the waiting game with fresh baits.

Heading west Steve and Ross Threlfall from Trelly’s Fishing World are doing well fishing at Nelson on the Glenelg River. The guys are catching well-conditioned bream and Estuary perch. Cranka Crabs and unweighted Frozen Pilchard doing the damage. If you're looking for a boat to hire and some local fishing knowledge head to Nelson Boat hire or the owner of the pub has a few tricks up his sleeve too. 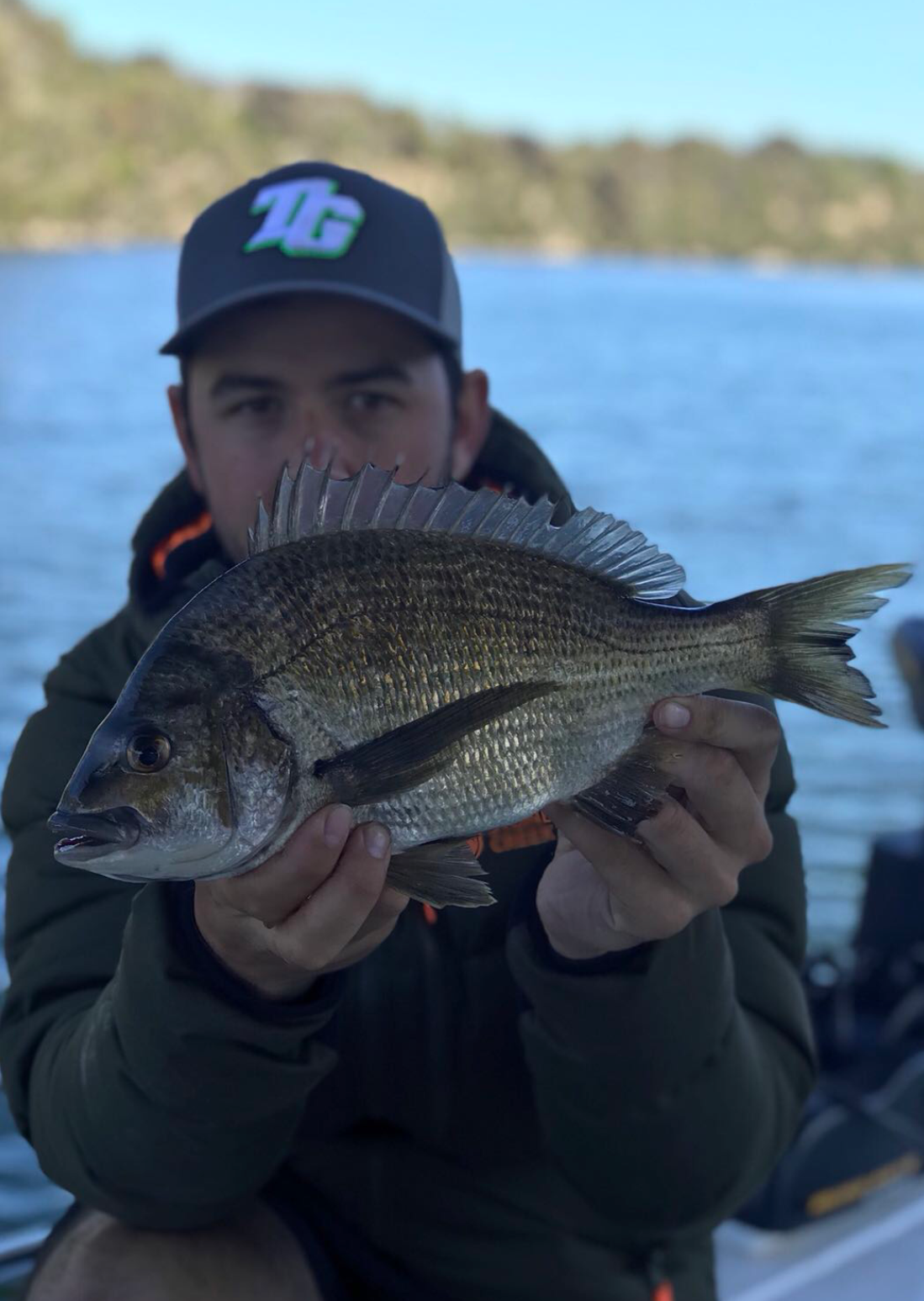 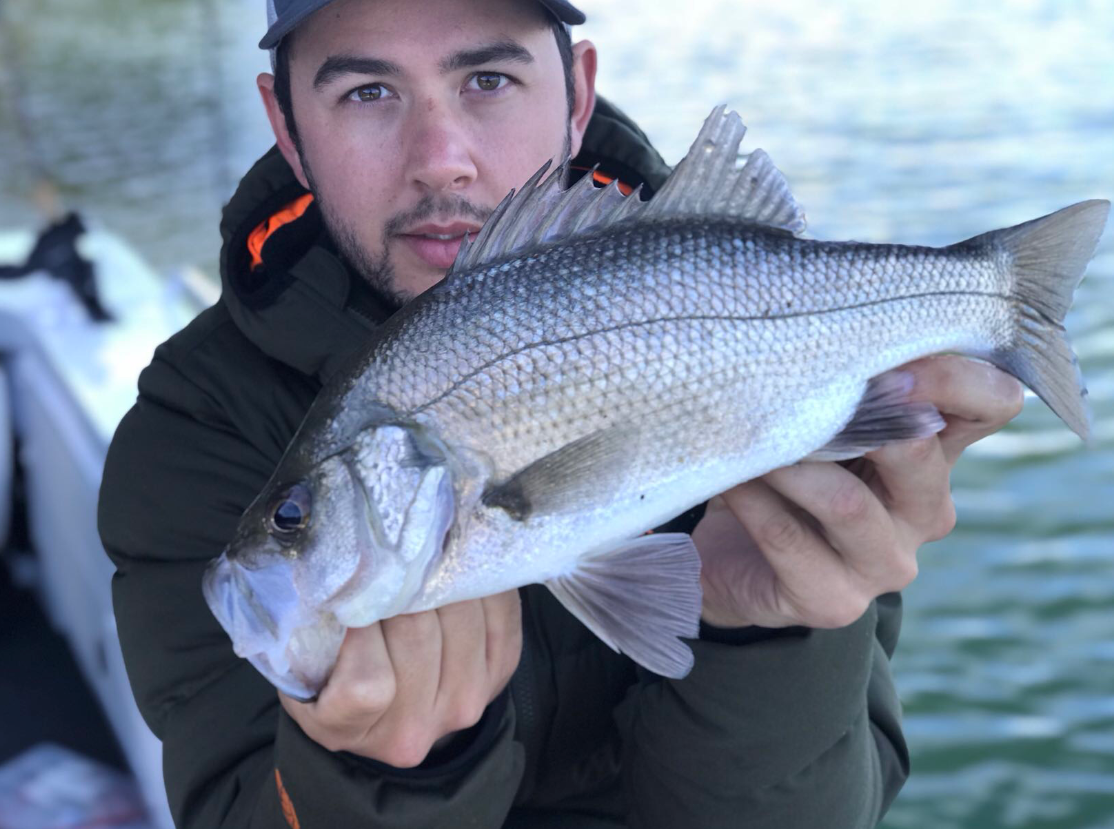 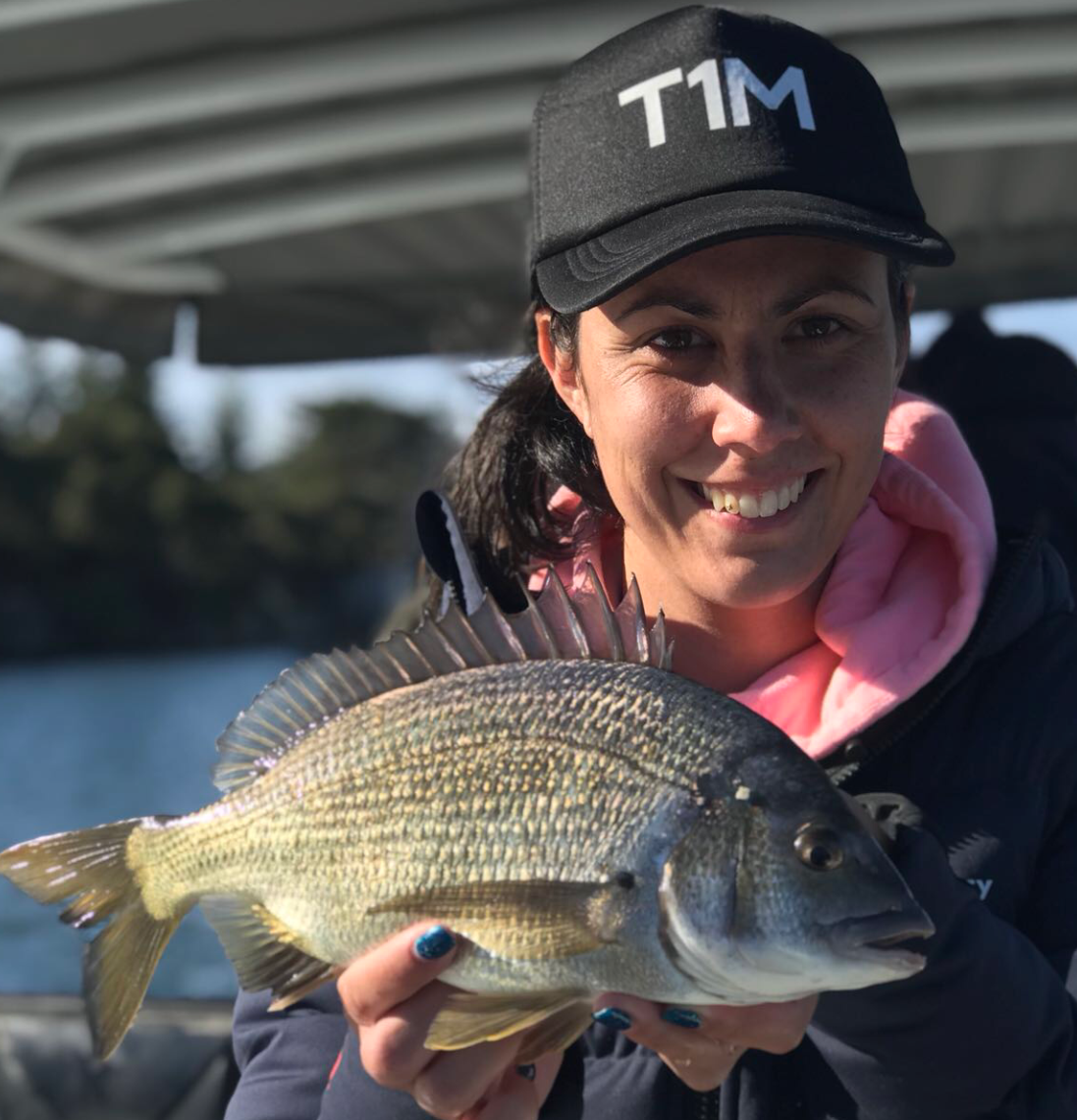 On the freshwater front Lake Purrumbete and Bullen Merri are going from strength to strength. Large chinook salmon over 60cm in size have come from both lakes with anchoring up and fishing pilchard fillet amongst a berley trail most successful.  Trophy brown trout are still making an appearance from Lake Purrumbete with down rigging Tassie devils the key to success on the big browns. Numerous amounts of redfin at Lake Purrumbete too for those jigging with soft plastics.

Closer to home and the Barwon River from Buckley Falls to Break Water producing some serious carp and redfin. Casting small hard body lures such as Atomic Shad in colour #17 was a solid producer on the redfin to 35cm. Carp were reaching almost 8kg in size and all that was needed to catch one of these mud marlin was a running sinker rig with a piece of corn or two.

Trelly’s Geelong’s Peri Stavropoulos and Adam Van Der lugt took a run down to the Great Ocean Road streams. Peri tried his hand at fly fishing which worked a treat landing a nice brown trout on a nymph. 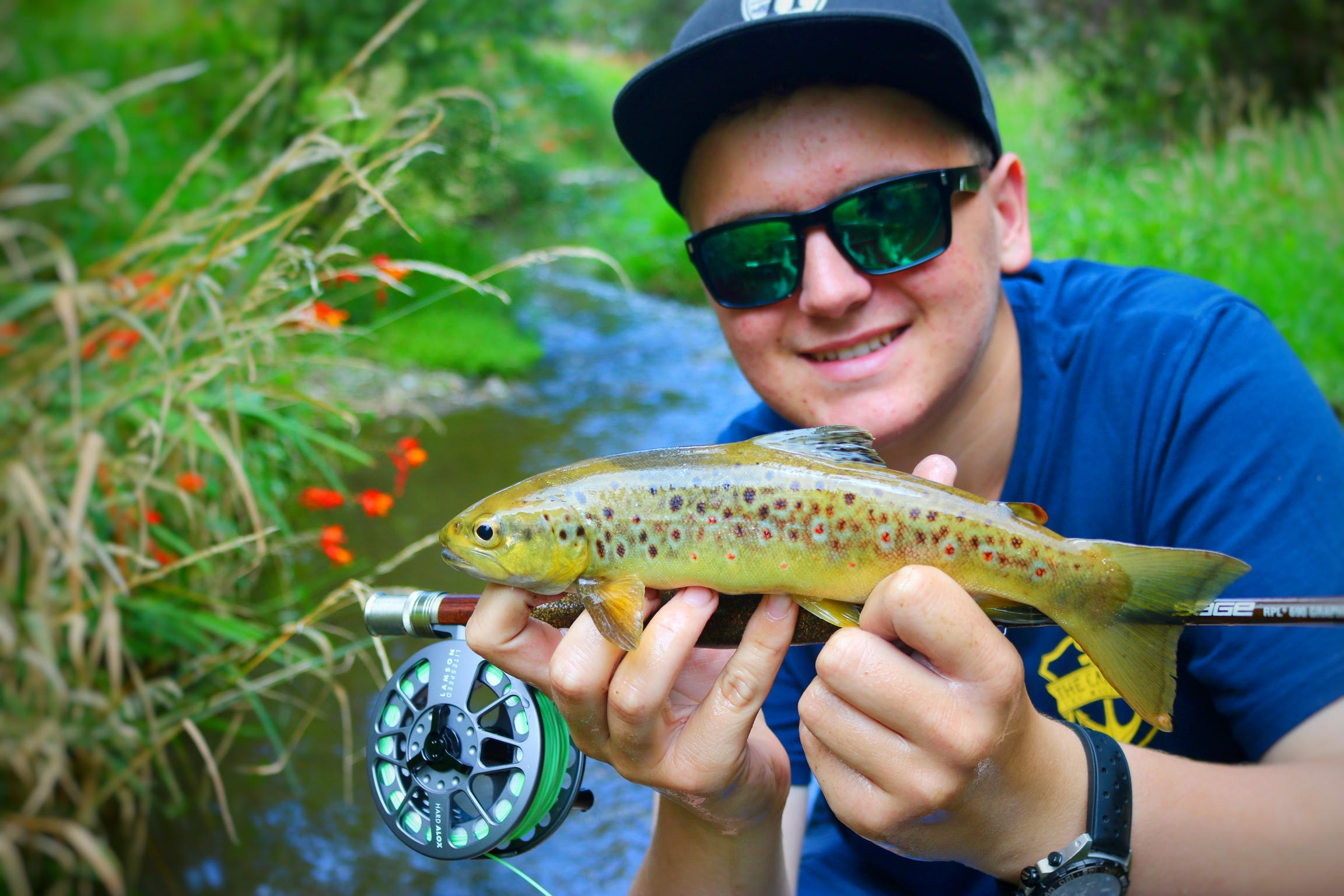 Quite a few Cod being caught in the Goulburn River around Trawool trolling deep divers, the Koolabung 6 meter in orange has been working well for fish around the 60cm mark, most of the Cod around Seymour have been caught using bait, Cheese and Bardi Grubs the standout, most fish small, but the occasional 55cm plus fish around also. Some Trout on Rooster Tail spinners around Goulburn Park in Seymour. The goulburn River around Nagambie is fishing well, with Cod, Yellowbelly and Redfin readily available. Trolling a mixture of Big Deep Hardbodies to small Size 3 Stumpjumpers the best chance of getting a good mix of fish, casting 1 oz Mumblers and 4 X 4 Bassman Spinnerbaits towards the snags around the edge of the deeper water working well for the bigger 75cm plus Cod. Kirwans Bridge area is still the Standout for good numbers of 40cm plus Yellowbelly, most fisho’s getting their bags pretty quick and releasing plenty more, bobbing small Yabbies and Shrimp around the Willows near the Island and along the bank of the deeper parts the best method, as little weight as you can use and keep the baits moving the key, keep moving location until you find the fish, by catch has been some nice sized Redfin and some Cod over 60cm using the same methods.

The Goulburn River has started to settle and is looking pretty good, lots of small Cod, Trout Cod and Silver Perch on bait, and a few bigger Cod on Bardi Grubs, big Yabbies and Scrubworms. The water colour is clearing allowing the lure fisho’s to start to catch a few more fish, trolling Old Mate’s and Codgers, brighter colours, and casting purple 4 X 4 Bassman Spinnerbaits the best method. The best areas are the River at the end of Dargalong Road Murchison East, Cemetery Bend Toolamba and Bunbartha area out of Shepparton. The Main Eastern Channel at Pine Lodge area has been fishing well for Cod on Cheese, fish between 60 to 75cm not uncommon. A few Yellowbelly in the Kialla Lakes on peacock coloured Jackal T/N 60’s. Redfin in the Victoria Lake on any 3 to 4 inch Soft Plastic you throw at them, the Grass hill near Aquamoves and the Boat Ramp at the Yacht Club the best spots to try.

Still big numbers of small Redfin being caught at Waranga Basin on small Deep Hardbodies and 60mm Drop Bear Squidgy Slickrigs, and also had some good reports of plenty of big Yellowbelly also, along the wall and at the entrances of both Inlet Channels. All the Channels on the Outlet side and towards Kyabram are fishing well, plenty of small Redfin on worms, and the occasional bigger fish over 40cm on Yabbies around the 3cm mark, throw a few big Carp in the mix and great fun on light gear and for the kids.

Getting some great reports from Lake Mulwala, plenty of Big Cod on Big Surface Lures such as 170mm Koolabung Codcrakers and the New Mega Pompadours, the Bundalong area at the mouth of the Ovens has been a good place to start. Yarrawonga to Cobram has been fishing well, most fish caught on the Troll, both smaller Old Mates and Codgers as well as the bigger AC Invaders and Coddog hardbodies working well for Cod around the 60cm mark.

The Ovens is looking really good, Peechelba Local, Russell Handley has been catching plenty of Cod between 50 to 65cm mainly on Cheese around the township, he also got smoked by a metre Cod last weekend, saw the fish but just could not stop it!, The River between Peechelba and Wangaratta is definitely worth a trip, it is a great area to try your luck using surface lures, spinnerbaits and even fly.
Share Share on Facebook Tweet Tweet on Twitter Pin it Pin on Pinterest
Trellys Victorian Fishing Report
Loading