Guys tell your ladies to check out the squid specials bellow for fathers day. "Set the hook"

Corio Bay was a sort after location at times due to its protection from strong winds.  Landbased anglers fishing from St Helens found large numbers of Garfish willing to take small amounts of silver fish suspended under a float. Walking the waterfront and casting soft plastics has seen anglers cross paths with pinkie snapper and the odd Australian Salmon to 40cm. Matching your plastic with a jig head heavy enough to make a decent cast will see you land more fish. 1/4oz is ideal when using 3” to 4” plastics.

Over at St Leonard’s anglers casting size three artificial jigs from the pier banked squid in reasonable numbers fishing into evening was once again most productive.  When safe to venture out anglers boated limited numbers of whiting fishing along the section of water know as Bourke St.

Queenscliff saw a few large squid boated but with the wild weather anglers were held back. Over the next month or two the Queenscliff Bight right through to the entrance of swan bay will see fantastic sized squid snatching most jigs that come their way.

Surf beaches continued to produce large numbers of Australian salmon for those casting metal lures or bait fishing with pilchard or blue bait. Bancoora was the standout location with Jan Juc and rock platforms between Anglesea and Lorne also a popular destination. Winter typically sees good gummy shark and mulloway caught on these beaches at night as well.

Freshwater anglers who ventured down to Wurdee Boluc managed to land some well-conditioned redfin.  Long cast helped anglers to achieve better numbers of redfin. Graeme Findlay landed a beast of redfin that went 41cm on a TD-95 Minnow. 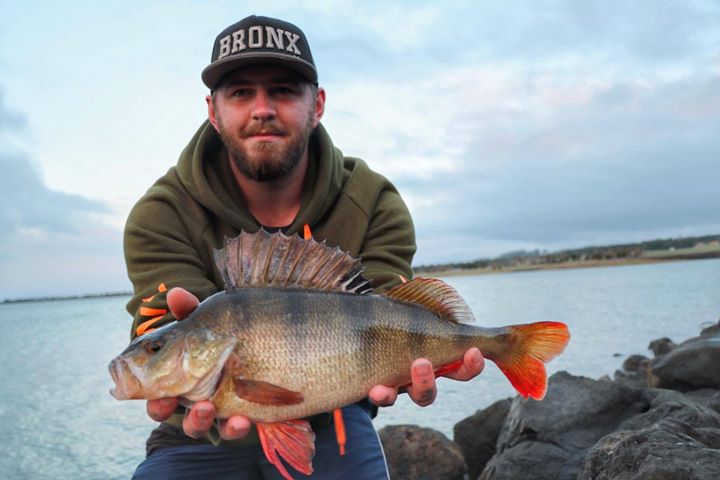 Closer to home the Barwon River is seeing a few redfin to 30cm with a liking to soft plastics and small hard body lures.

Still a few Crays being caught around Nagambie, mainly upstream towards the Wineries, putting the nets in the deepest part of the River and Bullocks Liver and cut up bits of Carp working best. A few Redfin and the occasional Yellowbelly in Nagambie Lake and Kirwans Bridge area. Worms and small Yabbies the best bait, and small Hardbodies such as size 3 Stumpjumpers and RMG Poltergiest in the Frog green colour working well. There is still a few Cod and Yellowbelly being caught just below the Weir and towards Murchison, mainly on bait, Scrubworms and Bardi Grubs the best by far. A few Crays around Toolamba, Cemetery Bend area the best to try your luck, always worth a surface fish whilst your waiting to check your nets also.

With the Irrigation season about to kick off, all the Channels are starting to fill up, most areas around the Drop Bars are fishing well for Redfin and some nice sized Yellowbelly, Jackal T/N 60’s, small 4D Chatterbaits and small Bassman and Pirate Spinnerbaits working the best. Waranga Basin is still producing plenty of Redfin, average size is around 20cm with a few bigger fish amongst them, Crazy Deep RMG Poltergiest and Mini Hunches working well. Greens Lake is producing the bigger Redfin, just not in huge numbers.

With the terrible weather over the weekend, reports from Mulwala and the Murray where few and far between and quite mixed, some anglers had no luck and some caught a few smaller Cod. Jackal Pomperdores and big shallow divers such as extra shallow 110 and 165 Coddogs and shallow 130 White Crow Warthogs working ok.

Pic for this week

This weeks photo’s are of Leon McCabe from Mooroopna having a great time up at Copeton during the week catching this 107cm Cod on a Bardi Grub. 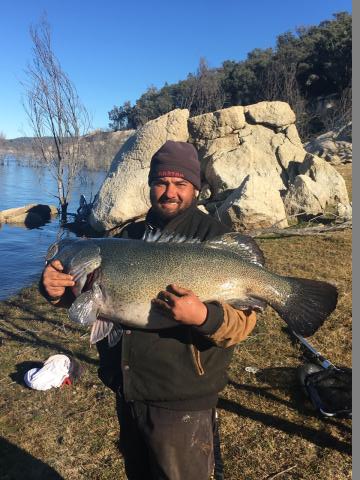 Next week if the weather fines up its time to have a look for some big squid at Queenscliff. Freshwater anglers keep casting away at Wurdee Boluc. 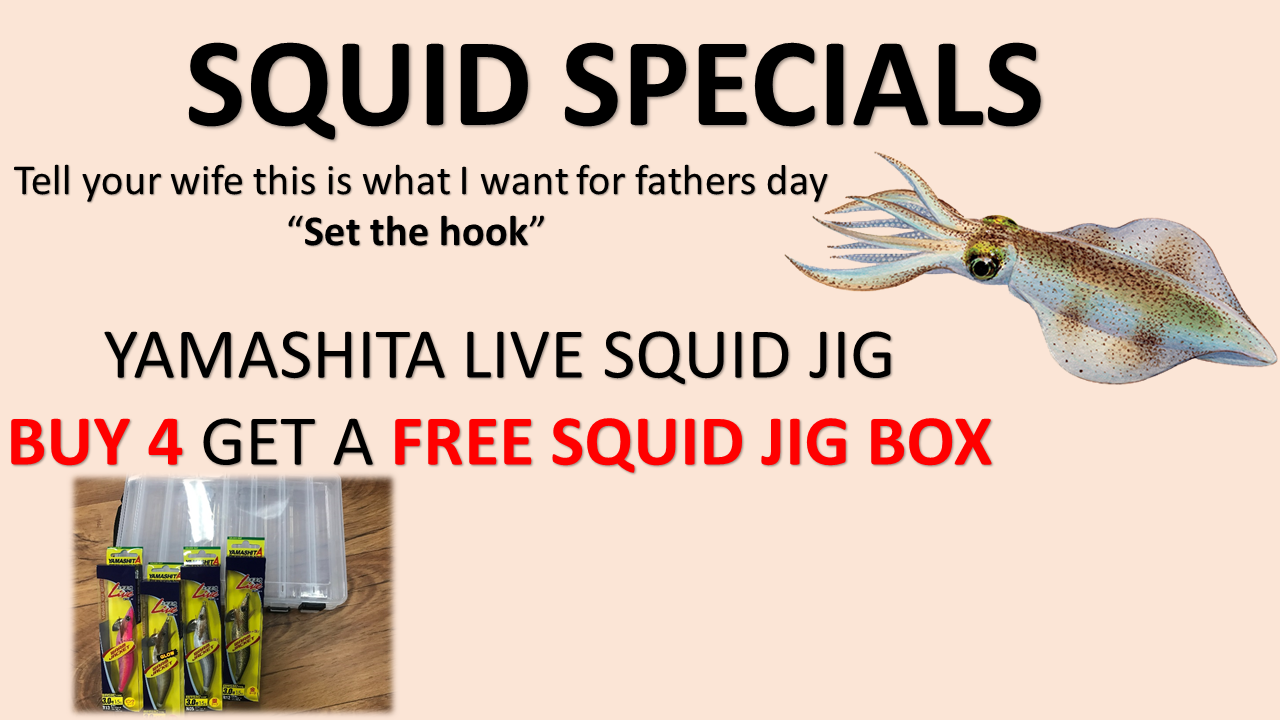 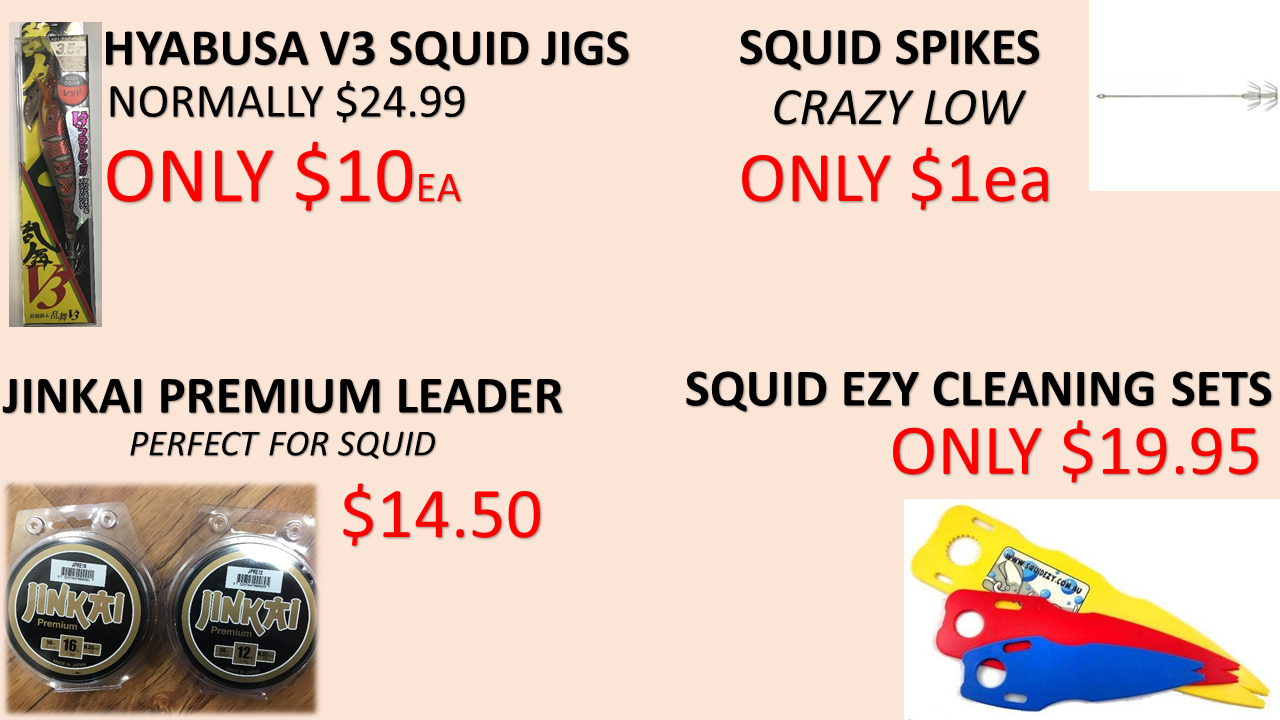 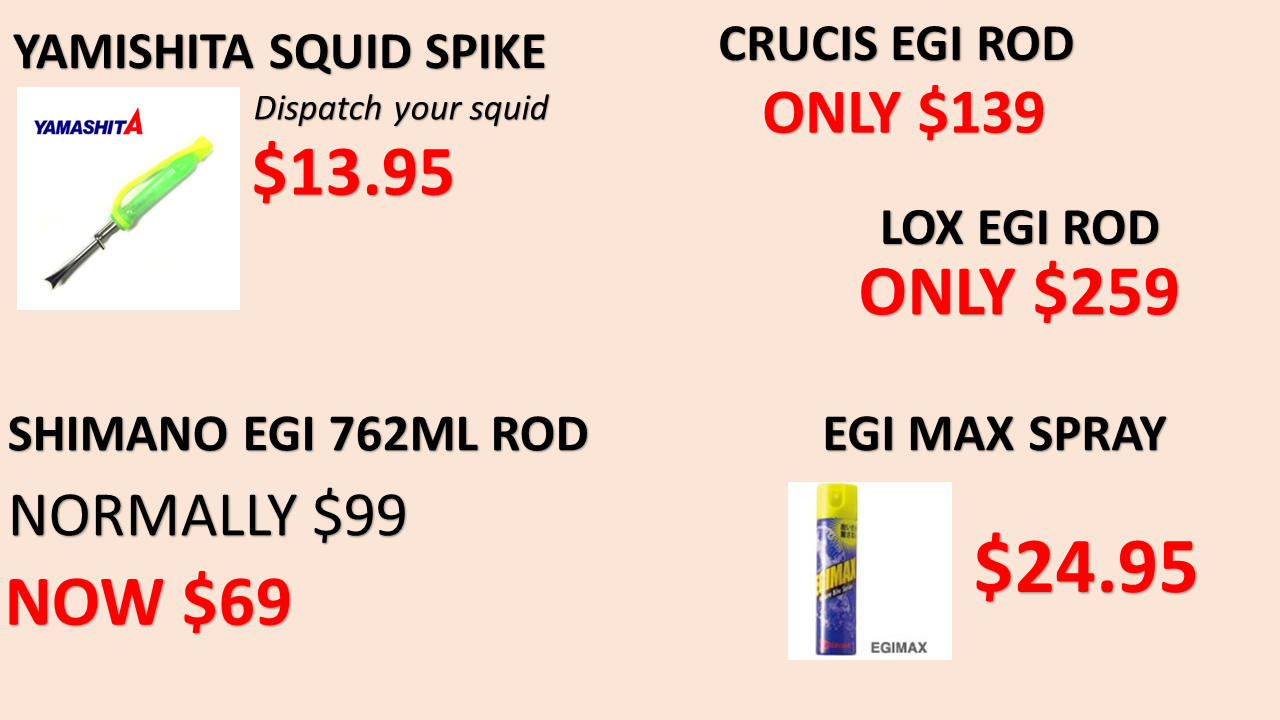 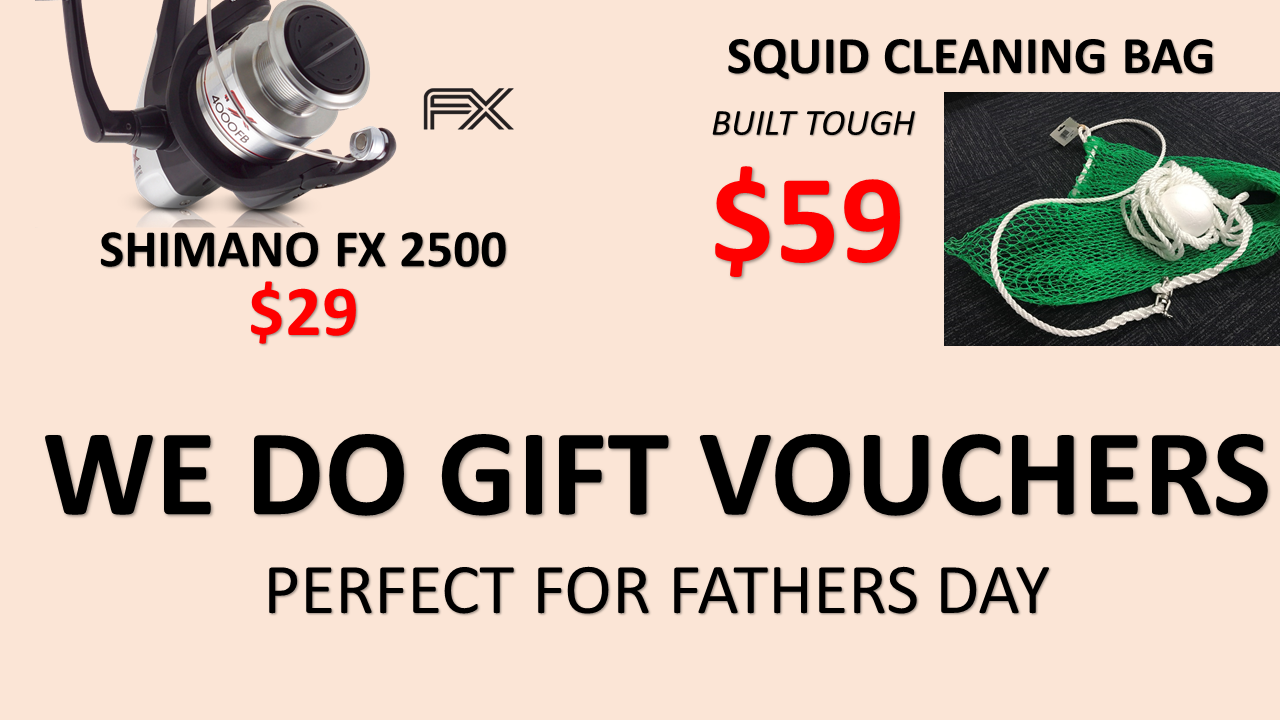 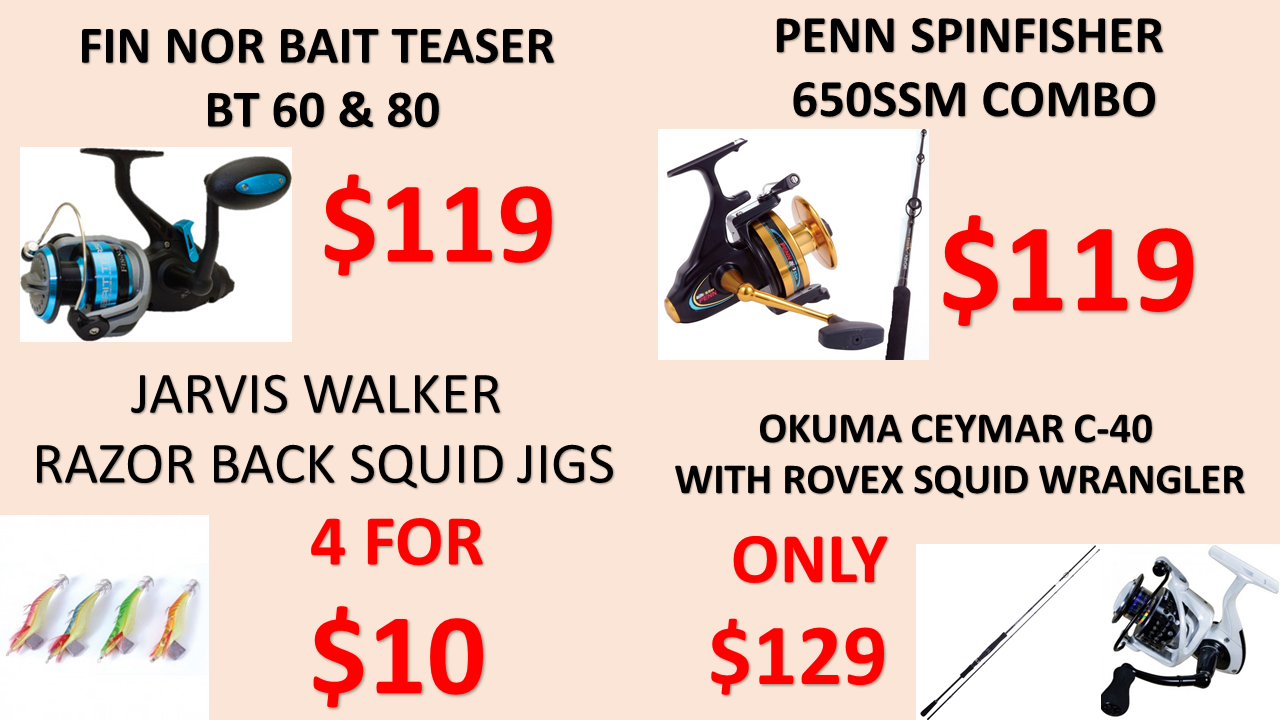 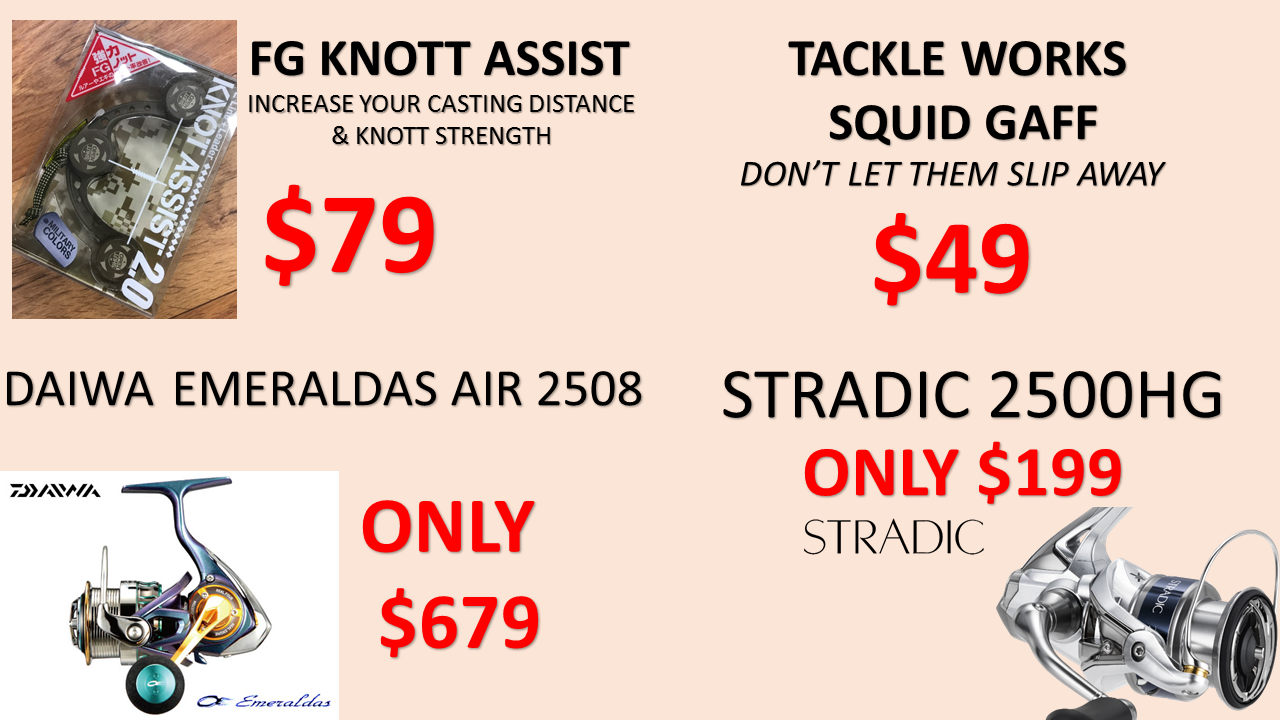