Setting out onto Corio Bay proved worthwhile for soft plastic anglers with such a mixed bag on offer. Fishing from the rock at Limburners boat ramp anglers crossed paths with numerous garfish that had a liking for small amounts of silver fish baited up under a float. On the spoil grounds just out from Limrburners pinkie snapper, pike and flathead kept anglers busy with 3 or 4 inch gulp minnows working a treat. Of note anglers have managed a few King George whiting on soft plastics over the past few weeks with worm style plastics the most effective.  Nathan Wright made the most of the nice weather setting out on his kayak on the Grammer School Lagoon. Casting lures around the moored yachts Nathan landed a number of nice sized black bream that gave him a run for his money on light tackle. Nathan kept casting away and hooked something solid that fought a little different to usual bream, the culprit turned out to be a large estuary perch, a rare catch for Corio Bay. 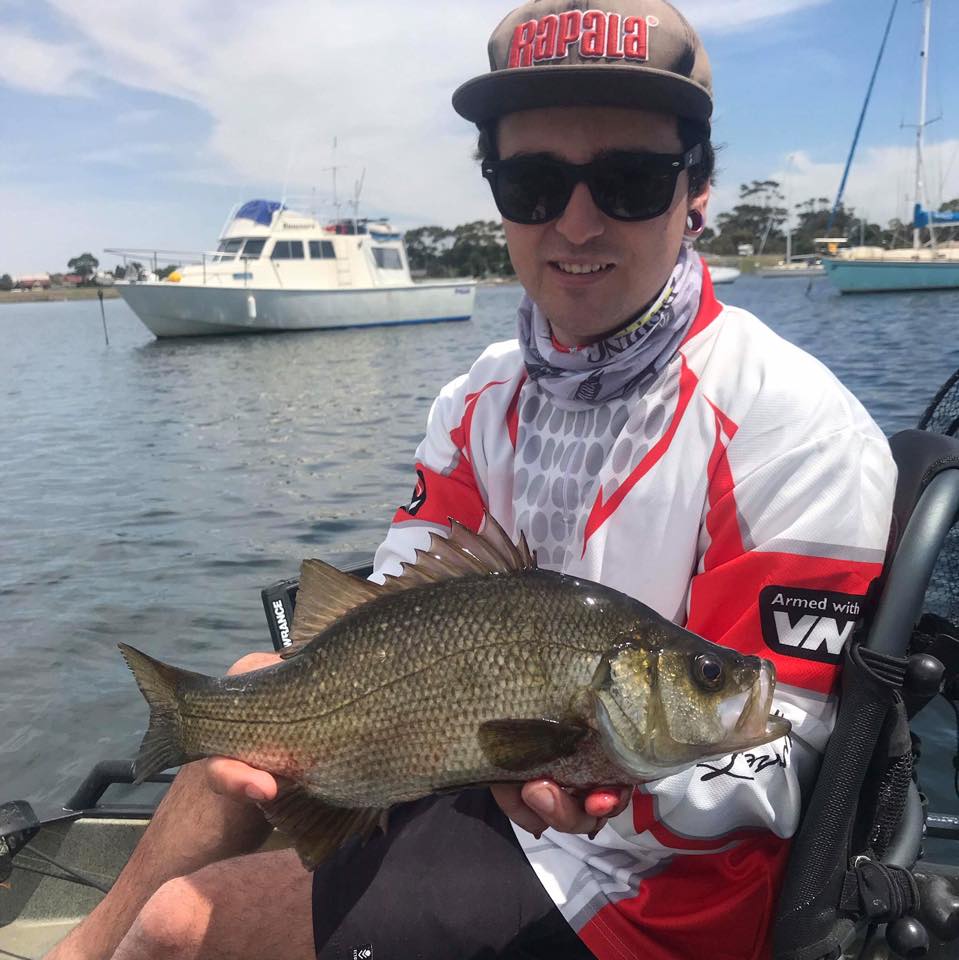 Heading over to St Leoanrds and whiting captures only increased. The usual haunt Bourke St was a safe bet on the run in tide. If you’re looking to beat the crowds over the Christmas break on the whiting all you need to do is find an area in depth of about 4 to 6 meters with some nice sand patches mixed with a bit of weed and keep moving if only 50 meters or so until you find a patch of feeding fish. Squid were on offer over most the weed beds between St Leonards Yacht club and the mouth of Swan Bay. Size three jigs in a white colour or King George whiting pattern did the trick. Fishing the deeper water out from St Leonard’s resulted in a few gummy shark to about 6kg.

Queenscliff held larger sized whiting on the grass beds but were more temperamental. The Harbour was productive for silver trevally and squid around a slack tide again soft plastics was an ideal tactic. The Rip at times saw Australian Salmon erupt on the surface in a feeding frenzy. Over the summer chasing salmon busting on the surface is exciting fishing, try casting 4 or 5 inch white coloured soft plastics into the feeding frenzy.

Heading out off shore and reports have started to filter in of Kingfish with some respectable fish to 8kg being taken by those marking them over structure and then sending a knife jig down or well-presented squid bait down. Trelly’s Geelong Kevin Hunter took a run off shore last week and boated a healthy bag of tiger flathead.  There is also still plenty of snapper and gummy shark in the 30 meter mark.
Out west all the estuaries fished well for bream, perch and even Mulloway. Off shore Portland had a few Kingfish make an appearance.

Lake Purrumbete shows no sign of slowing down with anglers snagging trophy brown trout. A variety of methods will work but trolling Tassie devils at first light along the East bank hard to beat. Using a down rigger during the day to reach the depths will increase your bite time. Mudeye under a float will be a great choice to boat a mixed bag of brown, rainbow and brook trout too. Tim Beusmans boated a absolute trophy of a brown trout of 4.45 kg just the other day. 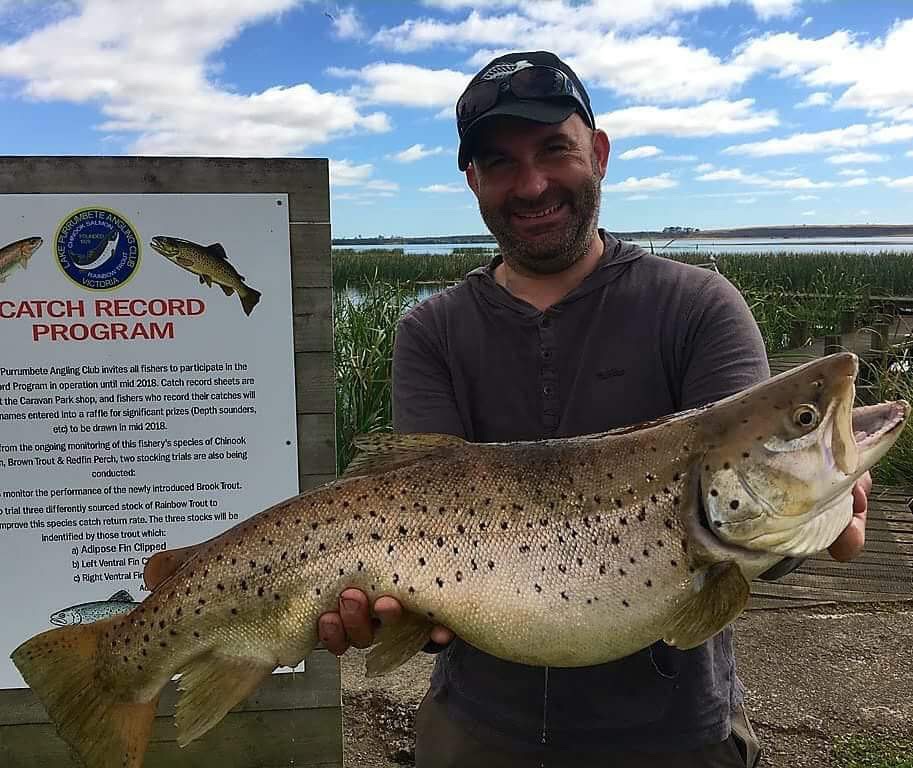 Just up the road Lake Toolirook still has rainbow trout snapping up Tassie devils on trolled lures.
The Barwon River around Queenspark saw redfin devouring small hard body lures. If you want to try something different use a Megabass siglet which is a surface lure and great for avoiding the snags.

The Goulburn River in the Nagambie region is still a little dirty but from the horse studs on North Rd to the Wineries is fishing well for Cod, most fish are around t he 45cm with the occasional 60cm plus amongst them. Trolling deep divers such as size 1 Stumpjumpers in colour 7 or 25, and small deep divers such as Old Mates and Codgers working well also, Casting 1oz Bassman Mumblers and 1oz 4 X 4’s at the trees along the banks working well also. Bait fishing with Bardi Grubs, Scrubworms, Cheese and Yabbies working well also. Murchison to Toolamba is still dirty also, but probably the best area to try at the moment, Bardi Grubs are by far the best method and most fish are undersize, but with some patience, you should catch a Cod over 60cm. Surprisingly there are a few Cod and Yellowbelly caught on lures, not as many as bait, but still worth throwing some spinnerbaits and surface lures around. The River around Arcadia and Shepparton, besides being dirty, looks really good and certainly worth a fish and even though as few fish are being caught, it will be certain to fire any day now. Undera area is fishing well, just a little hard to get the boats in with the muddy banks, Purple Codgers and Bardi Grubs and Scrubworms working the best.

The local lakes, Victoria, Kialla and Graigmuier are all fishing ok, some nice Yellowbelly on Jackal T/N 60’s peacock colour and some nice Redfin on Red Tailed White 3 inch plastic grubs. Cod in the Main Eastern Channel on cheese anywhere from Pine Lodge and south to Dargalong Road.

No surprise that Waranga Basin is still the place to catch Redfin in our Region, still huge amounts of small fish, out of 150-200 fish, you might get a couple of dozen keeper sized fish, but great fun for the kids, Trolling RMG Crazy Deeps and small Balista Smokes in green or white working well, then Drop Bear Squidgys doing the damage once the schools are found. All the main channels are really dirty so bait fishing the preferred method at the moment. Some bigger Redfin at Greens Lake and some reports of Yellowbelly near the inlet channel on dark Jackal T/N 60’s even though the channel isn’t flowing.

We are starting to get some really good reports from Lake Nillahcootie, fisho’s catching up to 20 odd Yellowbelly and Cod in a session, and some fisho’s even managing to find some Redfin. Mansfield youngfella’s Colby and Sam have got Cod to 61cm on Yabbies, smaller Cod on the surface using Pomperdores, 40cm Cod on Old Mate Spinnerbaits and some nice Yellowbelly on dark coloured 50mm AC Invaders. The lake looks a little like a cup of Tea, but hasn’t slowed the fish down, certainly worth a trip over the holidays. 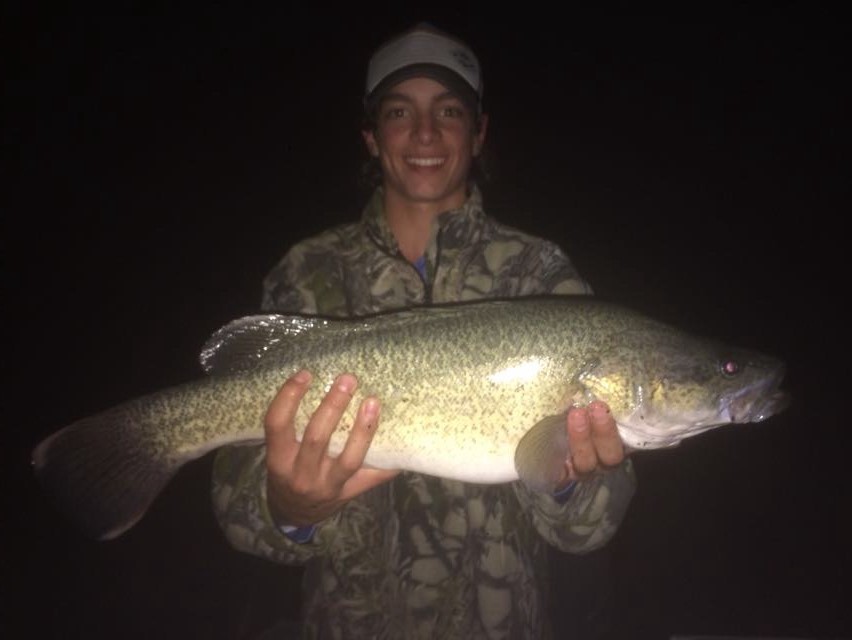 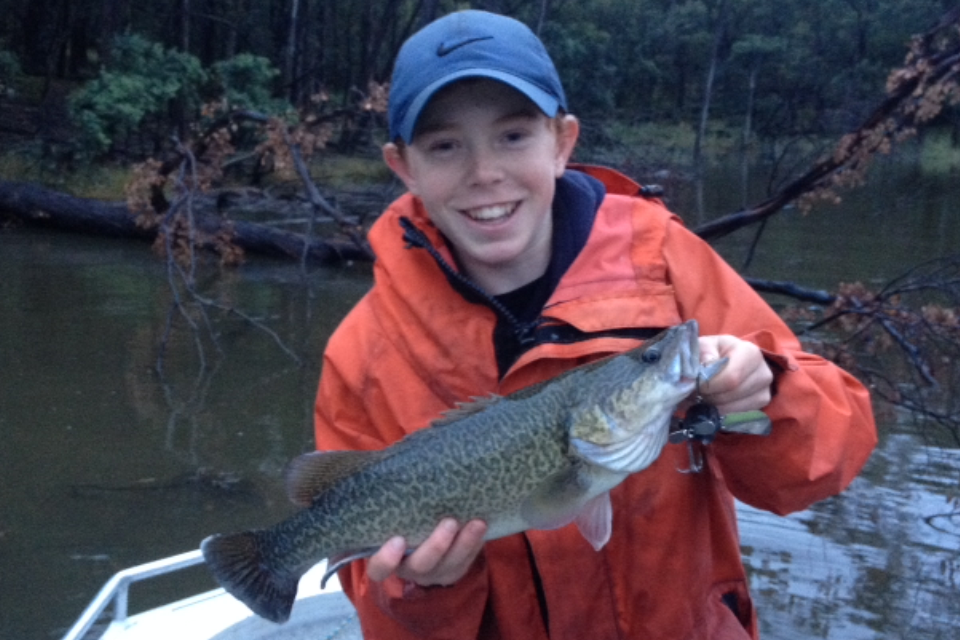 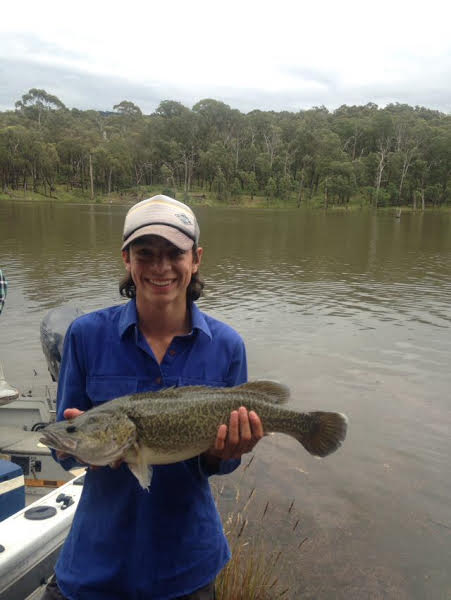 Steve (Trelly) fished with Rex Hunt up at Berri, besides all the banter, they had a great day on the water, catching any amount of Trout Cod and small Cod you wanted to, mainly on worms. Cobrawonga (Cobram to Yarrawonga) is fishing really well, once the river stops rising and dropping and settles, it’s only going to get better, Old Mates in the Purple and Big Surface Lures are working really well. Plenty of good numbers of Cod being caught in Mulwala and Bunderlong, surface fishing the most productive with Andrew getting a 52cm on a Koolabung Codwalker and a 58cm on a Colour 9 Old Mate diver.

Over the Christmas break there so many options to choose from but boating a Kingfish from the RIP or Offshore from Barwon heads is some serious fast paced action. Whiting will bite all summer long off St Leornards. The Barwon Estuary is a great location to take the kids with pippie on a running sinker almost certain to work.