Been some pretty average weather over the past week but to the anglers that are braving the conditions are being rewarded with some quality captures with pinkie snapper once again being a popular target species. The pinkies have been in fantastic numbers all around the Geelong waterfront and being easily assessable for both boat and land based fishos, soft plastics have been a great way to target them with 3inch paddle tail styles being the best. Australian Salmon have also been in great numbers around the waterfront, although they aren’t the biggest getting around they sure do make up for it in numbers and once again throwing soft plastics are the best way to target them.

The king George whiting fishing this past week has been just super out from Queenscliff with fantastic numbers and all at a great size, fishing any tide change has been fishing well with fish reaching well over 40cm. There are still plenty of whiting around the peninsula too but Queenscliff is definitely the place to be if you’re after a feed. Calamari still remain in good numbers too inside Swan bay through to St Leonards with size #3.5 jigs working best.

Offshore barwon heads is still producing some quality captures of snapper and gummy sharks, anchoring in 35 metres of water with fresh baits has been a very effective way to get onto some quality fish.

The west coast trout fishing is on fire! Just about every system has had fantastic reports of trout in good numbers, great size and in some places both! The rivers have been giving up some great fish with the Merri and Hopkins being the standout locations, casting shallow diving minnows in natural colours is the way to go to get stuck into the action. Wurdibuloc is still producing the odd fish, anglers are having to work hard for their fish but there is still some nice trout and redfin to be caught. The crater lakes have also been giving up some great fish with Bullen Merri holding great numbers of rainbow trout and chinook salmon and Purrumbete still being the best location if you’re chasing a trophy. 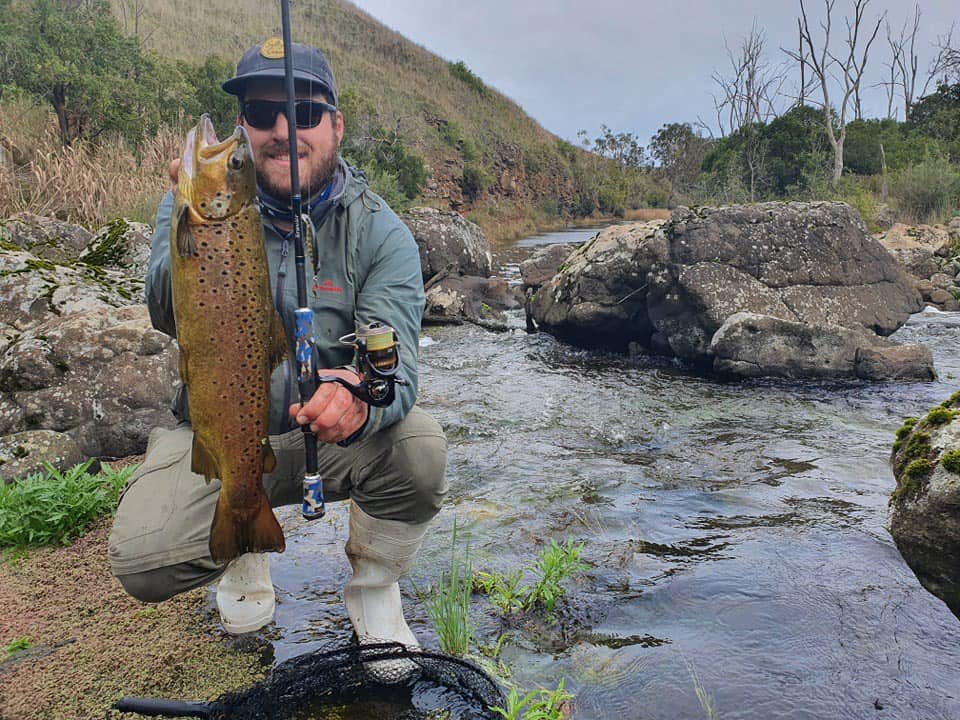 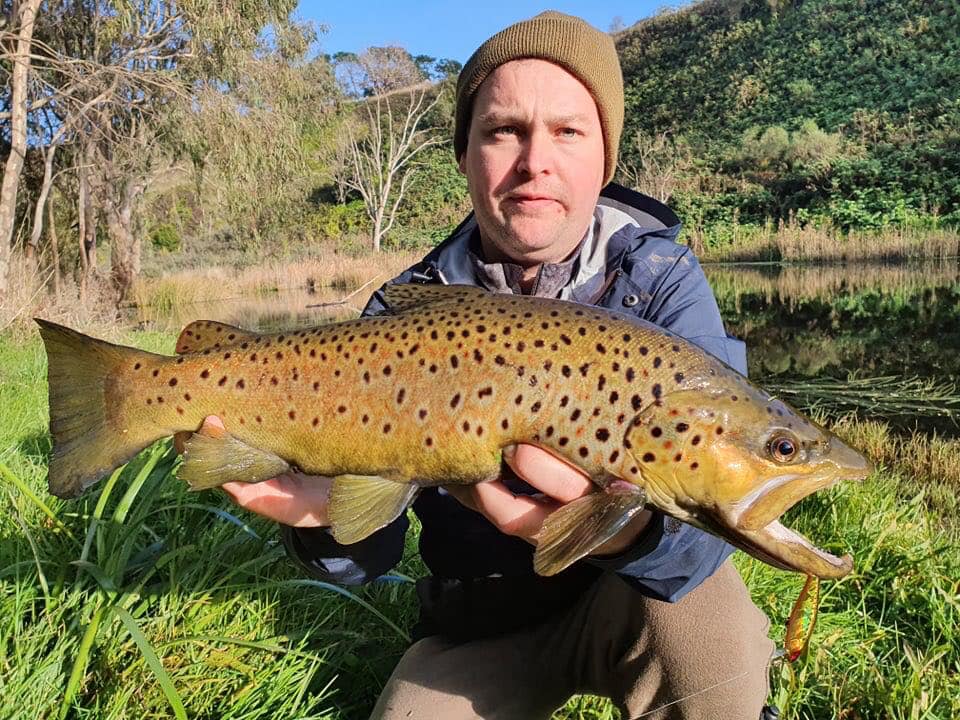 St Augustines water hole has been offering some fantastic fishing for the kids and families lately with plenty of catchable size rainbow trout jumping onto fishos rods, a simple running sinker rig with powerbait is all that’s required to get stuck into the action and is a great spot to go and catch your first fish!

The Goulburn river has still been running a bit high and is currently on the increase making fishing around the local area a little tough. Around Murchison and Arcadia there have been some reports of plenty of small cod getting caught on Chicken and Grubs. There have also been some great reports of Crayfish around Murchison as well, Justin and Karen from Trellys Bendigo gave Murchison a go over the weekend and found the local Crays loved Chicken, winding in a few on rod and reel. Nagambie has been hard work as well but we’ve heard of a handful of smaller cod getting caught around the wineries on Bardi Grubs. Crayfish have been really good around Nagambie and if you can find a good patch of river to drop your pots you should be able to find some nice keepers.

Waranga Basin has been a bit quiet but some nice Redfin can still be found around the boat club and Harrimans Point. Small Yabbies and Worms are working well to get shy fish biting and once feeding you should be in for a good session. Try and sound up any structure that may hold fish to boost your chances of catching a few.
Waranga Basin also holds alright numbers of Crayfish but you have to sort through a lot of Females and undersized ones to get your bag of keepers. Definitely worth dropping in a few pots while trying to get onto a few Reddies. 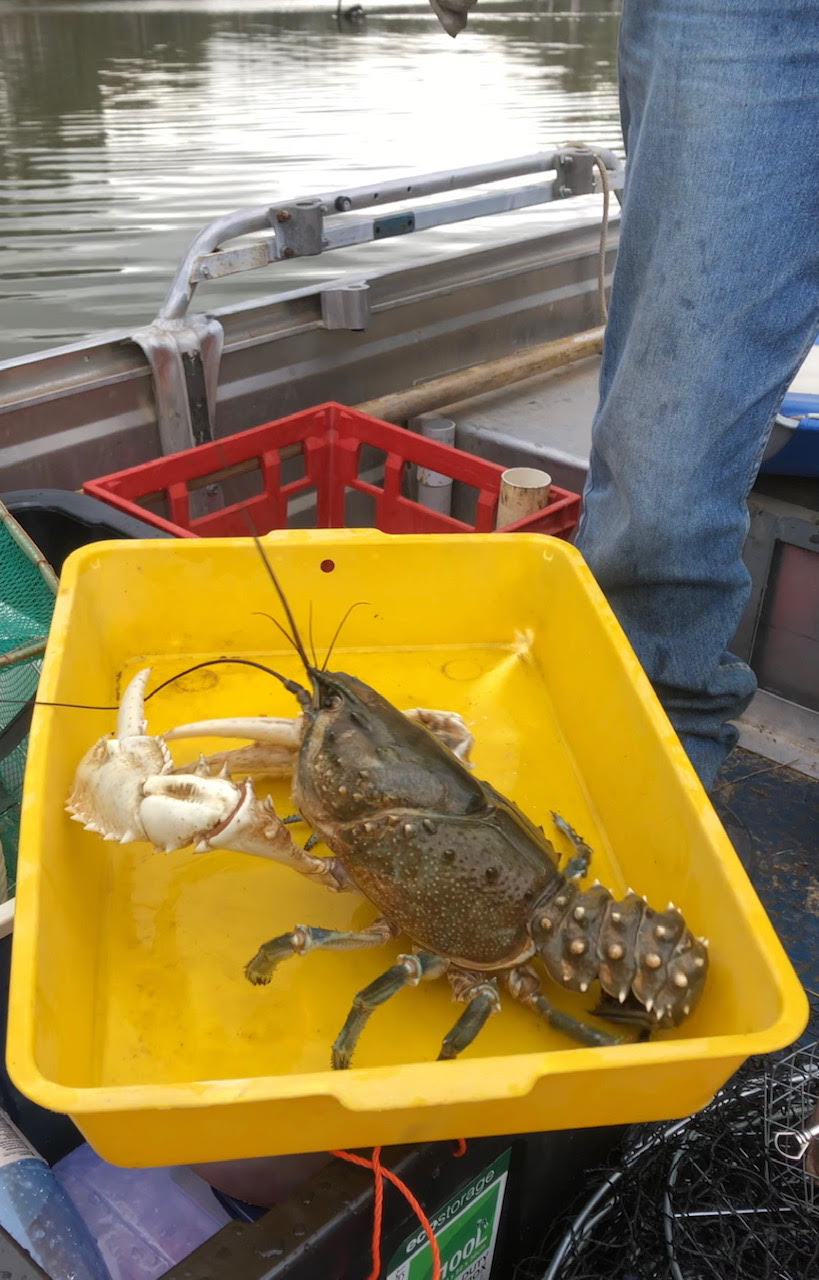 Around Bundalong has been fishing well and seems to have cleared up a bit. Some nice Cod were pulled out over the weekend including one over the metre while trolling a paddler in the shallows. Around the Northern side of the lake we heard of some nice fish getting caught while casting a Jackall Gantarel in The Black Mamba colour. Crayfish have been going excellent around Bundalong. Shepparton Regular Peter had a ripper session with a mate catching over 50 Crays in two days, Sticking within their bag limits of 2 per day and 4 in their possession each, they threw a heap back including a few big ones like this monster, which had a Carapace length of around 18cm. 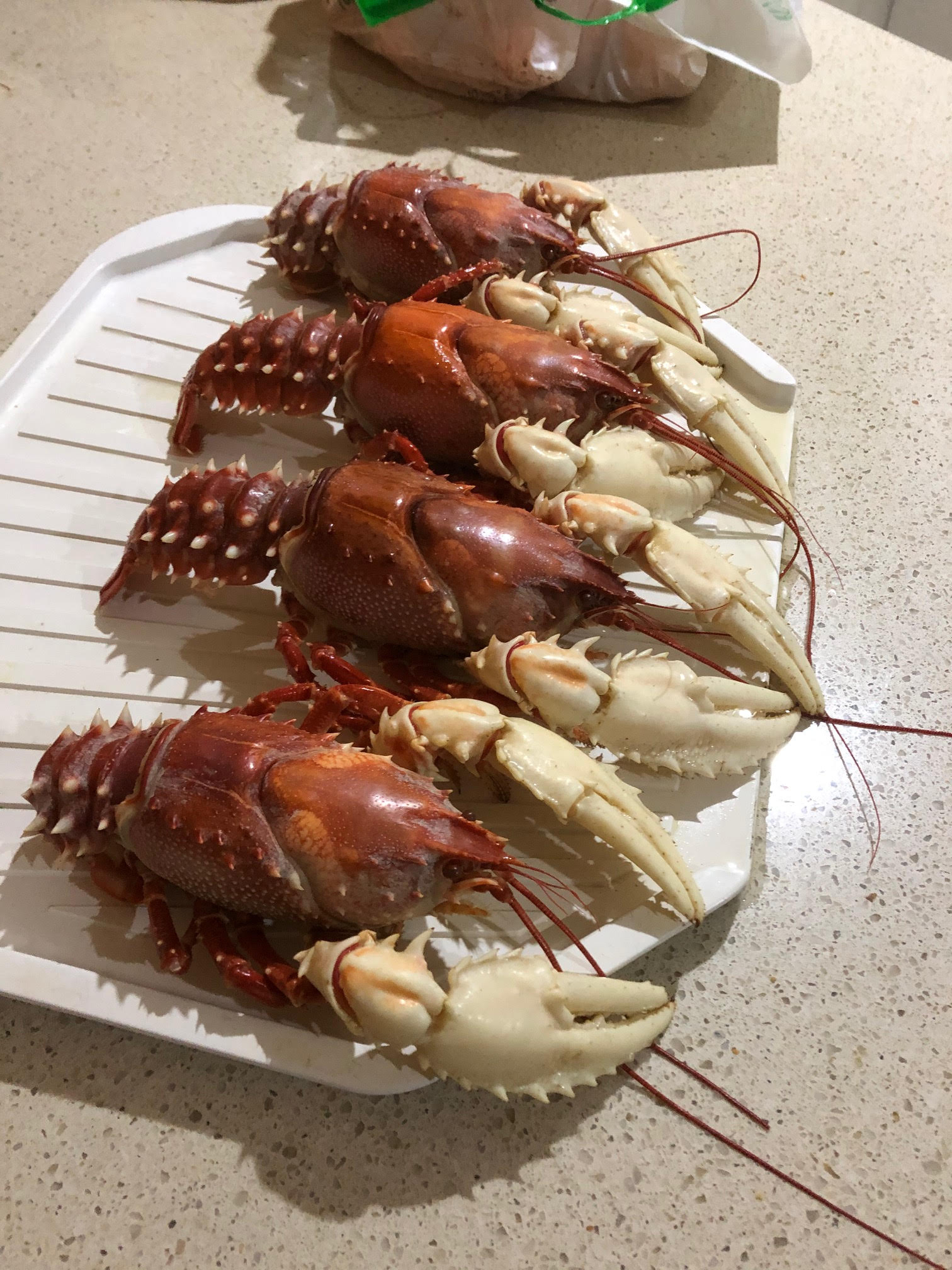 Eildon has still been fishing well and with a bit less pressure since the long weekend we’ve seen some great fish getting caught. There have been numerous Cod over the metre mark pulled from the areas around Jerusalem creek, Big River and the Main arm. Big baits have been the go and if you can sound up a school of baitfish You’re in with a great chance of finding some good Cod nearby. Shepparton Local Jamie Christened his new boat on the weekend with 1.15m of chunky Lake Eildon Murray Cod caught on a large Hardbody cast amongst the timber. 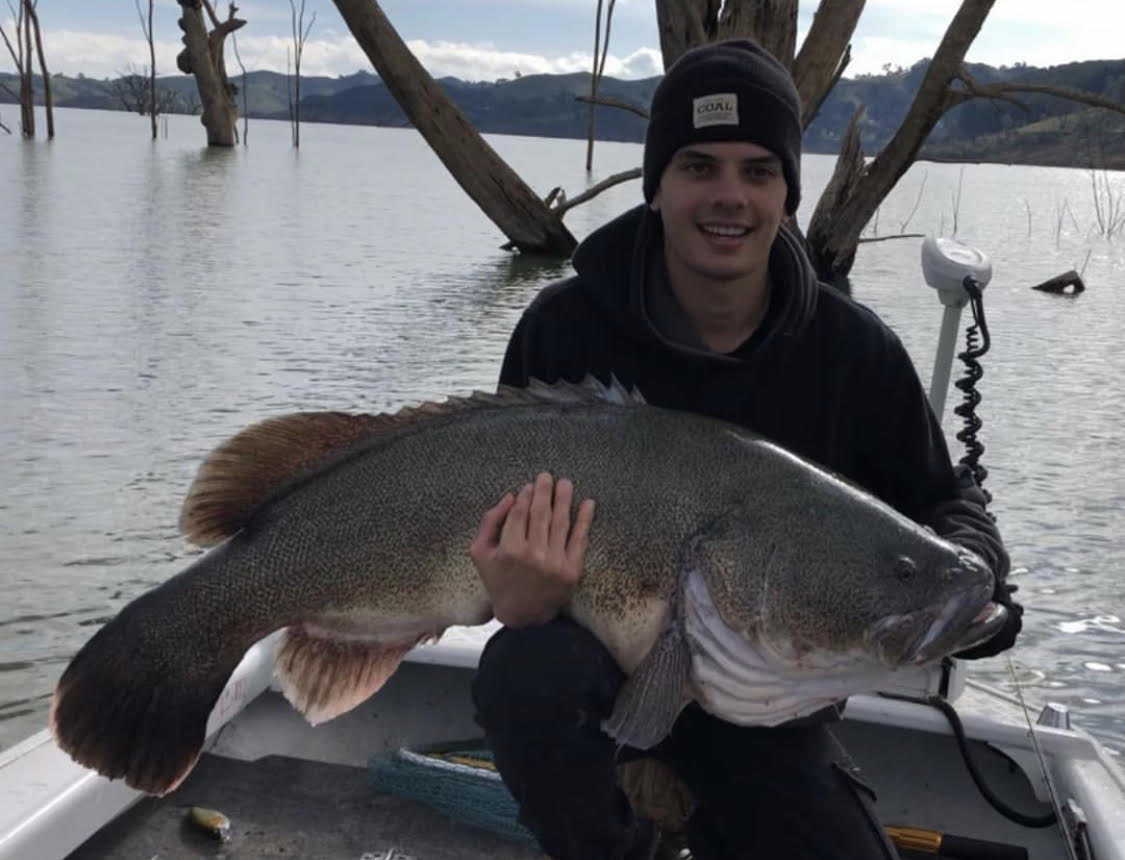 Time on the water paid off for Shepp Regular Greg who landed this beast out of Eildon this week. 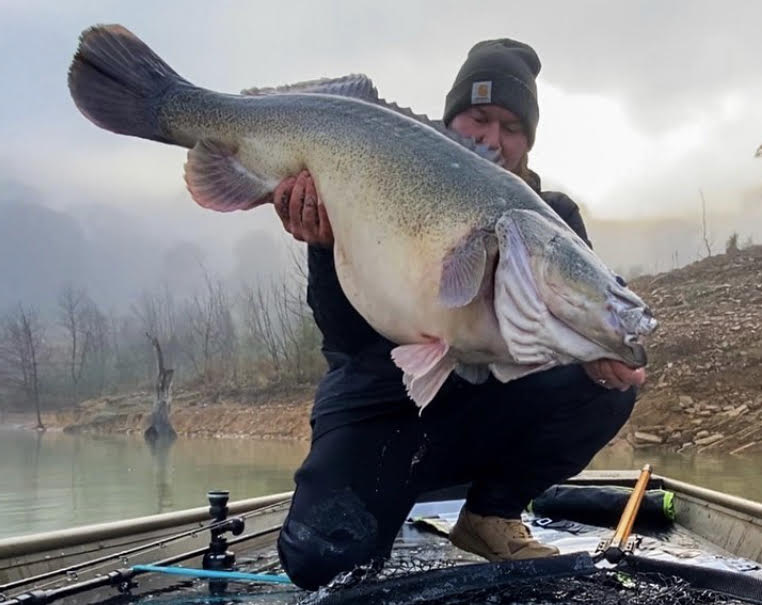 Reports have slowed down over the last week from Cairn Curran. If you are planning a trip to the lake stick to trolling small hard bodies around the rocky points. Lures of choice would still be the 15ft Codger or 50mm RMG in crazy deep.

The Loddon river has settled which has resulted in a few rewarded anglers. Anglers who have put in the hours this week have been rewarded with some quality fish being caught up to 70cm. Due to the river being low make sure you cast as close to the structure as possible, using something with a bit of movement can help entice the fish to bite. Lures such as mumblers, big surface lures and hard bodies in a shallow diver have been effective. 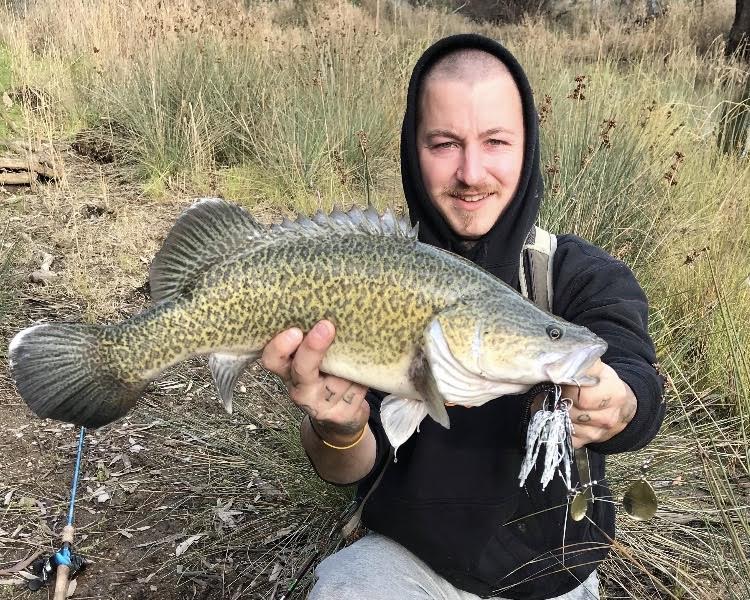 Stick to the rocky ledges around Eppalock, there are a few good size yellow belly being caught some up to 60cm. Casting lures such as jackall mask vibes in the 60mm or the Arashi deep 18 specifically in the colour Bluegill have been rather effective. These fish seem to be more active early mornings or late afternoons.

Redfin numbers have dropped off since the cooler weather has moved in. Anglers are still managing a few smaller models, just be persistent and hopefully you will find some better quality fish. Keep an eye on the sounder to locate the school and once found try using an ice jig to get them to bite. Alternatively use a small running sinker with a worm.

The water clarity in the Campaspe river is still very poor. If walking the banks I recommend using a big chatterbait rubbed with Dizzy scent. The scent can help attract the bite in dirty or clean water. (Dizzy Scent is now stocked at our Bendigo Store).
If you're thinking of using bait I recommend trying out Trellys special scented chicken there has been some nice cod being caught on this recently.

Tullaroop is the best place to go to if you’re after good size redfin. Still some big redfin getting around the lake, some of these fish are up to 50cm! These fish still seem to be sitting deep and are not usually found in schools. Bobbin jigs or bouncing plastics off the bottom is an effective way to get these fish to bite.  Good size trout are also around and can be found using Tassie Devils.