Cold, windy and wet conditions over the past week hasn’t made it easy for Anglers to get out for their fix, however the guys that are getting out there are not coming home empty handed. Starting in the outer harbour the Snapper bite has definitely slowed a bit from the previous week but there are still plenty of fish to be caught. Casting soft plastics has still been by far the most productive way to target them whilst drifting to cover the ground, fish have been ranging between 1-5kg with plenty of table sized Flathead and bulk monster Pike. If a bigger fish is on your mind then Portarlington is the way to go, guys anchoring along the channel drowning a few baits like Pilchards, Squid and Silver Whiting have been getting onto some nice fish with most of them between 4-7kg. It pays to fish your tide changes and keep plenty of burley in the water. 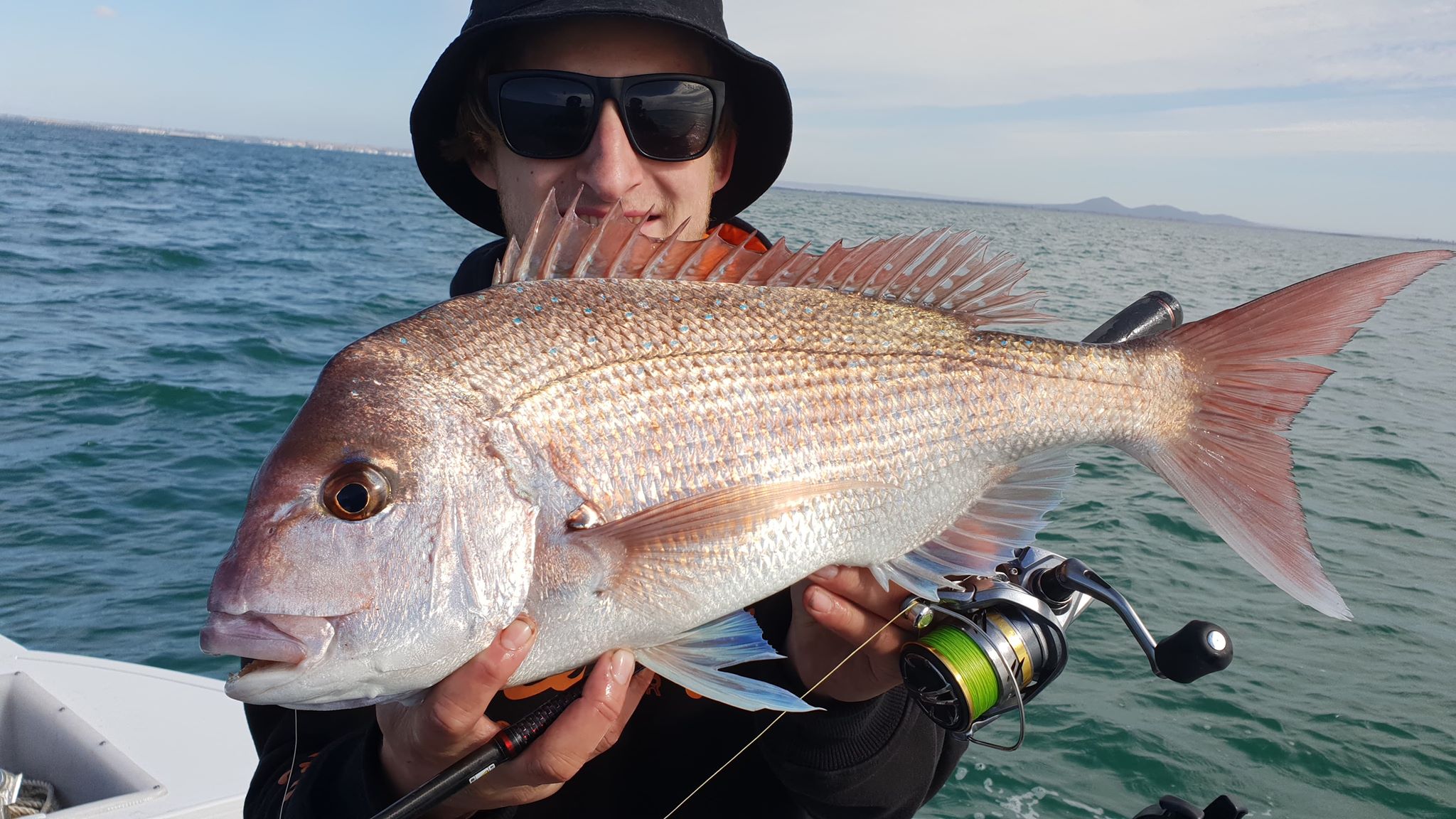 Josh Whitford with fine example of whats on offer 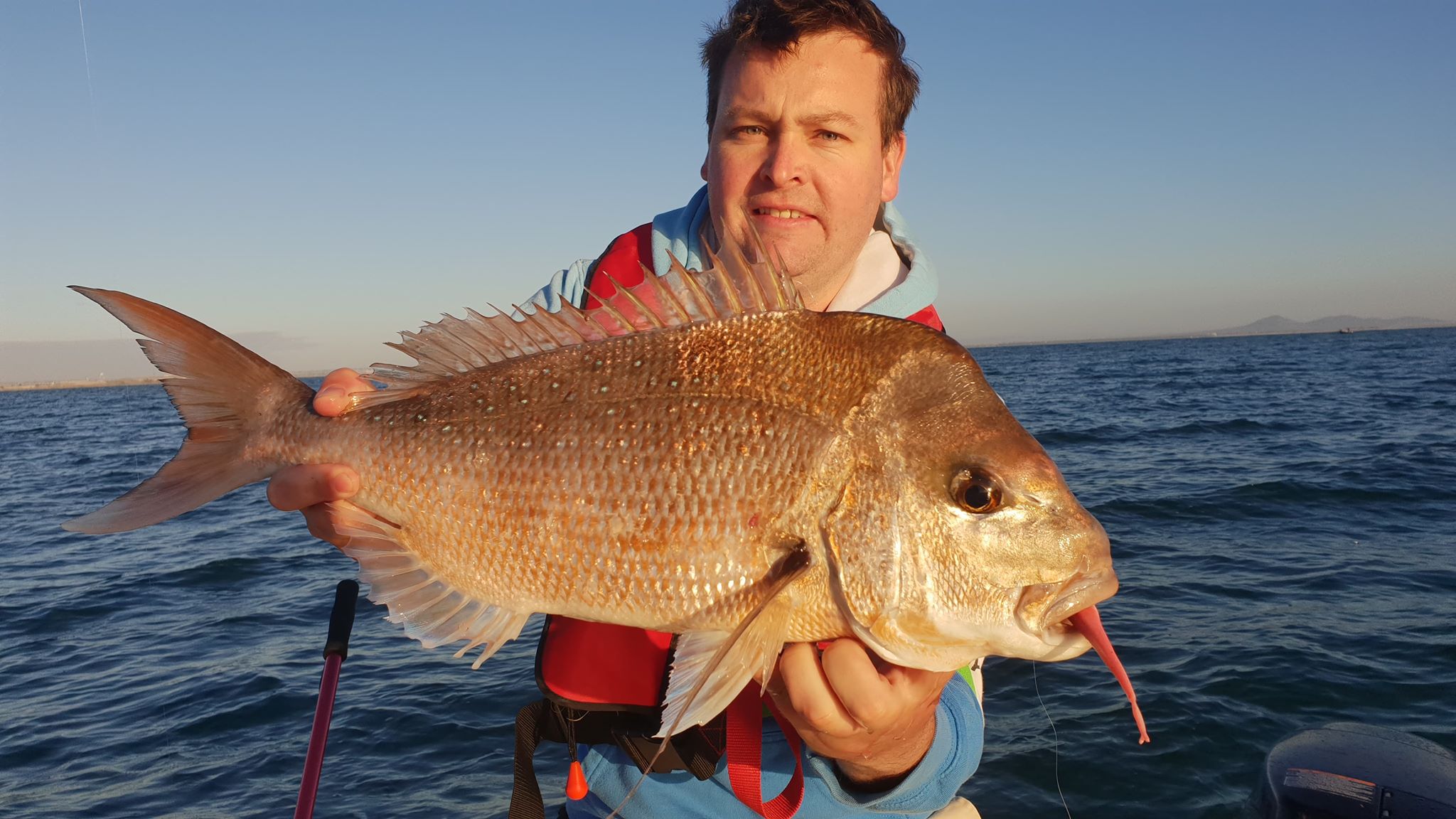 Squid along the Peninsula has been a little tough as of recent purely because of the weather causing the water to be quite dirty, the further down to Port Phillip Heads you go the water clarity should get better and hopefully the better fishing. Whiting don’t mind the dirty water and with the Whiting fishing continuing to be productive this would be a great time to get out there and chase a few. The entrance to Swan Bay has been holding a wide variety of species including Pinkie Snapper, Pike, Salmon, Whiting, Trevally and Squid. Fishing the incoming tide with either Baits or Soft plastics should find yourself with a mixed bag of some of the bays finest, and you’re always a chance for a Gummy Shark in there as well.

Along the surf coast has had a few reports of Anglers getting onto some large schools of Australian Salmon on the chew. Fishing from either the beach or rocks has been by far the most productive casting metal lures ranging in size between 20-60 grams, coming into summer with the warmer weather there is always going to be a chance of bumping into a Kingfish off the rocks as well.

On the Fresh water scene Wurdi Buloc has fired back up again for guys casting of the main rock wall with lures, Josh and Andrew Whitford snuck down there over the weekend with the pair landing multiple Rainbow Trout and Redfin on Pegron Minnows and Tassie Devils

It’s all about COD COD COD, and there are plenty being caught, some good sized Cod around Trawool, fisho’s lucky enough to have access near Trawool have been getting them trolling Koolabung Codzilla’s, otherwise Google map some area’s to try, Goulburn Park and behind the Pubs along Emily Street Seymour are some good spots also, baits such as Bardi Grubs, Cheese, Chicken, Big Yabbies and Scrubworms all working good, and Spinnerbaits from the bank has been really productive, make sure you fish a little smaller as well, plenty of Redfin being caught is this area also.
Trolling big deep hardbodies along the deeper edges of the River near the Wineries at Nagambie has been working well, a few Cod around 60 to 74cm, and I would expect to hear of some bigger models from this area over the next few weeks. Bait fishing the banks near Mitchellstown Bridge with Bardi Grubs, Shrimp, Big Yabbies and Scrubworms working well for Cod. Worms and small Spinners are working well for Redfin in the same area.
Some nice sized Yellowbelly around the boardwalk at Nagambie Lake, T/N 60’s and 3 to 4 inch soft plastics working well and focus the area up near the Park and Old Rowing Club.
Jackall Gantarels and Pompadours are catching a few Cod from 45cm to 80cm around Kirwans Bridge, just cruise around the snags with an electric and work hard, and you should see some results.
Below the Weir from Murchison, Toolamba to Arcadia is fishing great, plenty of Cod, although we haven't heard of any monsters yet, good numbers on both Surface fishing and Spinnerbaits, good area’s to try would be Murchison East down Duggans Road, Cemetery Bend at Old Toolamba, just drive in from Kiota Road and find a nice Sand Bank to relax on. Bait fishing is working really well also, Bardi Grubs, Cheese, Shrimp, and Scrubworms all working good, lots of by catch Trout Cod and some good numbers of Yellowbelly between 35cm to 45cm.
The River looks really good and the weather is looking a lot better this weekend, so try not to drive past these spots for a fish, the Goulburn is probably one of the more consistent fisheries for Cod at the moment.

Big numbers of Cod and by catch Trout Cod around Peechelba to Wangaratta, Pirate Spinnerbaits in the Vibrating blade working well, just walk the banks, walk out onto the logs and drag the spinnerbait along it, better yet, grab a Kayak and drift from log to log, you are in with a good chance of big numbers of fish, maybe not huge, but plenty of them.


Rushworth/Kyabram
The channels in this area have been a little hit and miss over the last couple of weeks, but as the weather warms and the water temp goes up, things will pick.
Waranga Basin is fishing ok with some nice sized Redfin being caught but still lacking in massive numbers. There’ve been some nice Reddies pushing 40cm getting caught while trolling lures like 15ft Codgers and the new Trellys Redfin colour Poltergeist. There have been some nice numbers of Yellowbelly caught trolling the same areas as the Redfin. Around Harrimans Point and the caravan park have been productive as well as trolling along the wall. We’ve also been hearing more reports of Cod being caught out of the Basin, yup you heard that right, Cod like this ripper are becoming a more regular catch out of Waranga while trolling for Redfin and Yellowbelly. So by all means don’t be afraid to throw out a size 1 Stumpjumper or similar while out there as you might get a welcome surprise. 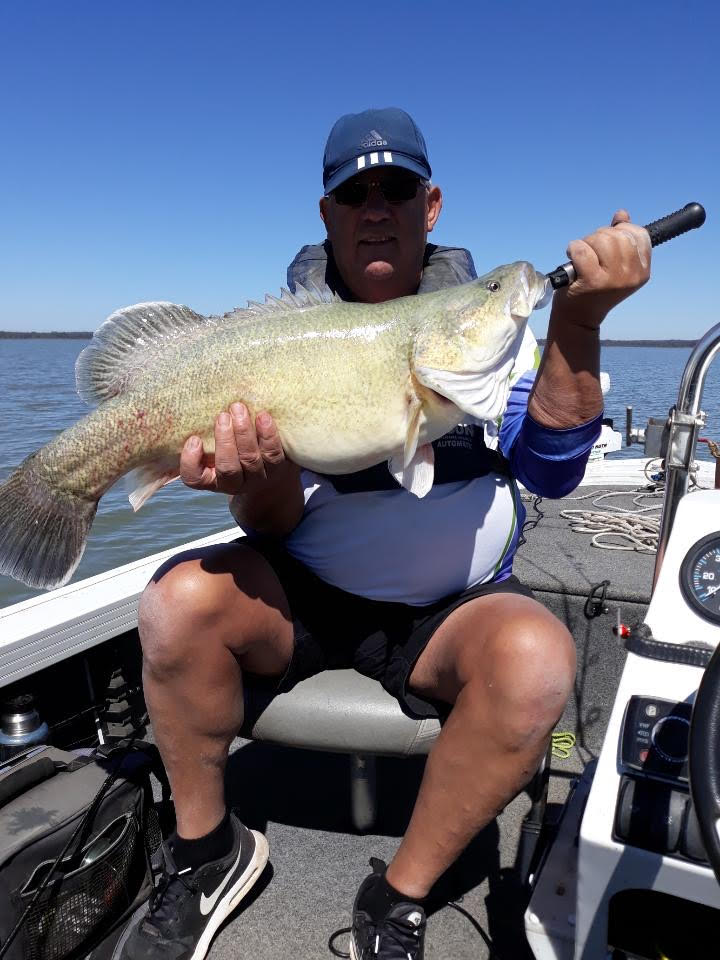 Great cod caught while trolling for Redfin out of Waranga Basin

The Main Eastern Channel is fishing really well for Cod, bait fishing the standout, but Josh landed this 68cm Model on a White Vibe fishing for Yellowbelly a couple of weeks ago, this is a great fishery to get the kids involved or to have a bit of fun on light gear, not many snaggs to contend with, easy access and reliable water making it a great option if your time poor. Anywhere from behind Wahring Station to Kialla to Invergordan have great locations, just use Google Maps to suss out some easy access points to try. 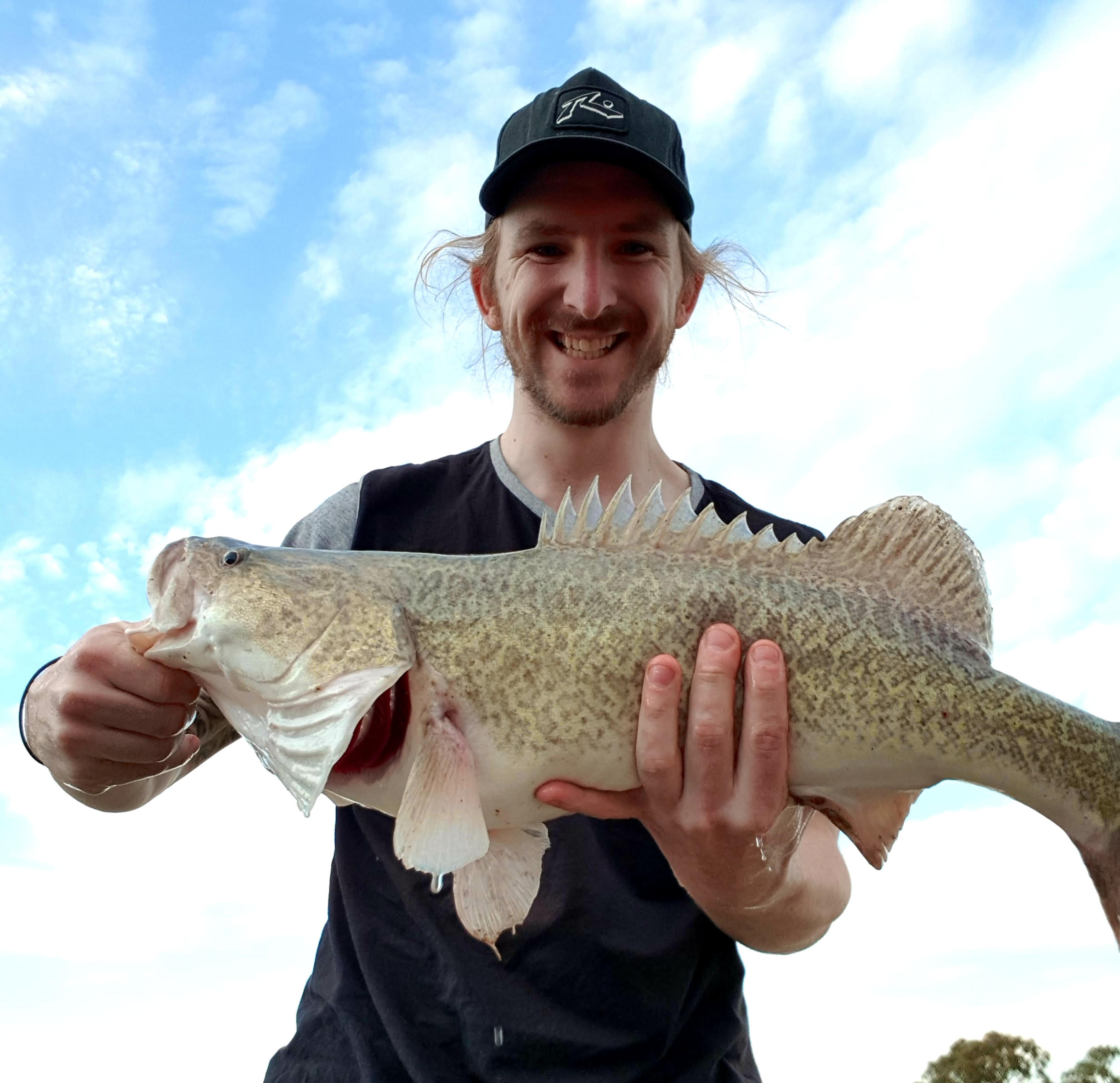 Josh with a cod from The main Eastern Channel

The standout from the Murray from Cod Opening is the fisho that landed 9 Cod in one session, all on Size 1 Stumpjumpers near Barmah. We have had stories of first cast hookups on the surface using Pompadours, within 10 cast on Spinnerbaits for their first Cod of the season, so most Fisho’s getting amongst the Cod on Opening. Most productive areas would be from Barmah to Ulupna Island, particularly around Bearii. Both Surface and Spinnerbaits working well, but some big fish are being caught on baits such as Bardi Grubs, Big Yabbies, Scrubworms and Cheese.