The most sought after species at present would without question go to Kingfish they seem to be popping up everywhere along the Bellarine Peninsular. Offshore from Point Lonsdale and down to the mouth of the Barwon River, Kingfish were keen on snapping up squid strips trolled in conjunction with a white ocky skirt. Late afternoon seems to be most productive although they do bite all day. The Kingfish have ranged in size from just legal size to an impressive 13kg. Anglers found that once one fish was hooked up casting a soft plastic near the hooked up fish would result in another kingfish snapping up the soft plastic.

Inside the RIP dropping knife jigs down or baited rigs with fresh squid did the trick with the average size Kingfish from the RIP a bit better than offshore. Australian Salmon to 3kg in size kept anglers entertained when the kingfish were slow just watch out for the Bluefin Tuna which have taken anglers by surprise and a much welcome by catch. Squid were still on offer for land based anglers at Queenscliff Pier and Bell Reef again larger size 3.5 jigs worked best. Silver Trevally showed up inside the Queenscliff Harbour with soft plastics cast on a slack tide very effective on fish to 40cm. 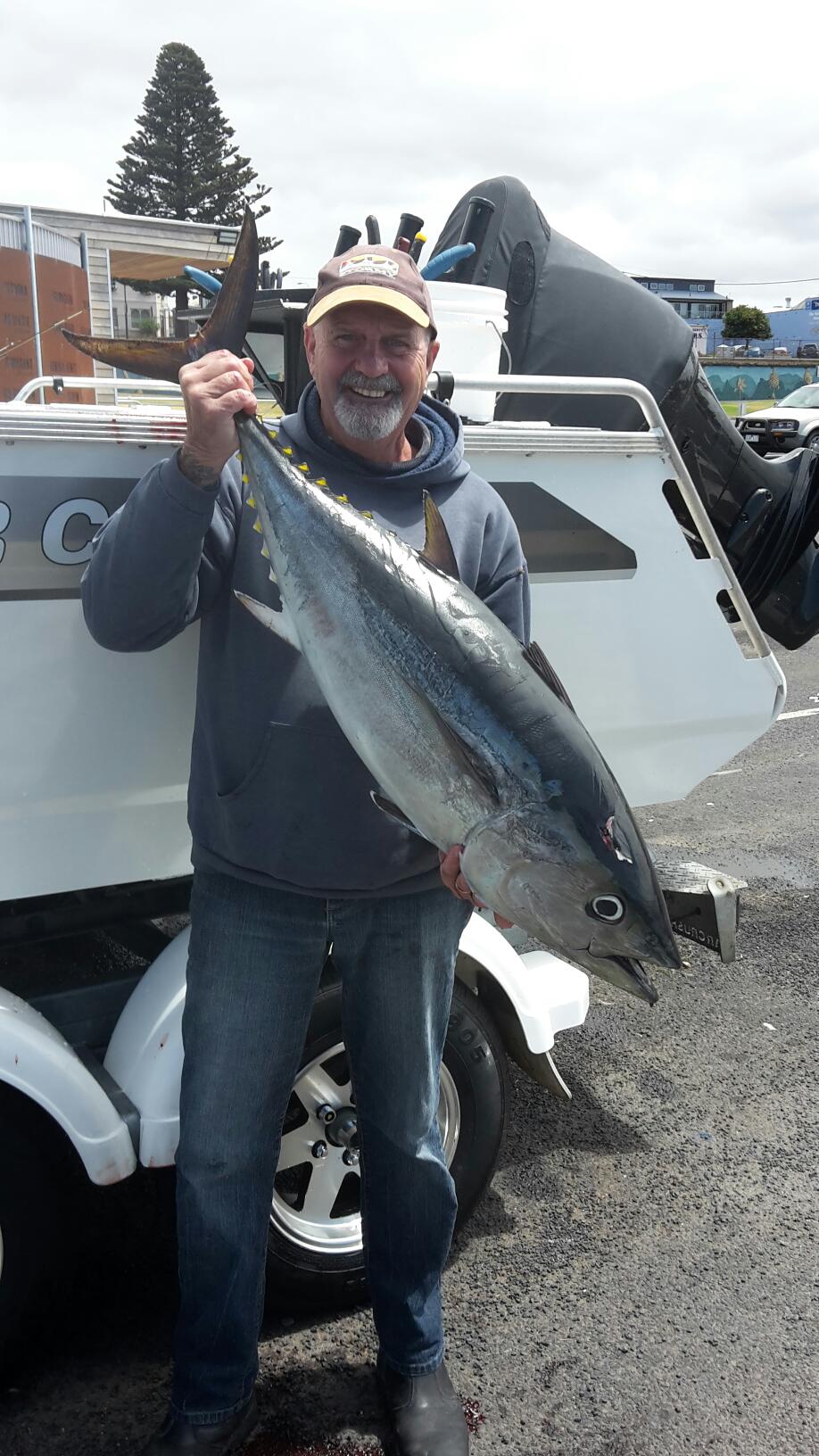 Back around to Clifton Springs and the Curlewis Bank fished well for King George Whiting. Pippie or tenderised squid proved most sought after baits. The odd large flathead to almost 60cm was taken by a few lucky anglers chasing whiting. Near the Alcoa Pier Pike and Australian Salmon to 1kg are being taken by trolling hard body lures in a minnow style such as the Daiwa Double Clutch 75 & 95.

The Barwon Estuary was a great spot to wet a line this week with plenty of smaller model King George Whiting, Australian Salmon and mullet all being taken from the lower reaches of the system. Small pieces of prawn on a running sinker rig is all that’s needed. Some thumping big black bream were also cruising around for those fishing fresh live baits like bass yabbies.

It’s not often we see trout fishing this good during the middle of the summer.

The Western District lakes Tooliorook and Elignamite have all produced brown and rainbow trout to 2kg by flat line trolling Tassie devils along with Rapala F7. First or last light has definitely been more productive but fish have been taken during the middle of the day on baits.

Lake Purrumbete saw a run on big brown trout to almost 10lb and bucket loads of redfin for those bobbing soft plastics or other lures in there face.

Next door Lake Bullen Merri is still on fire for Chinook Salmon and bait fishing is still the way to catch bigger model fish. Trolling with down riggers in Purrumbete or Bullen Merri is a great way to target trophy fish year round. At present 30 to 35ft of water with a Tassie Devil trailing behind your down rigger bomb is ideal with a speed of 3ks an hour spot on.

Closer to home a few reports from the lake of a 1000 cast’s Wurdee Boluc of some redfin from the main rock wall taking a liking to lures pitched out of an evening. The redfin have not all been the big monster the lake is known for but still good fun.

The best part of the Goulburn to focus on at the moment because of a small environmental flow below the Weir, would be the Seymour to Kirwans Bridge, mainly around Nagambie towards the Wineries and Horse Studs, bait fishing around the trees with Yabbies, Shrimp and Scrubworms and Trolling big Deep divers and casting Spinnerbaits will get you a good mix of Redfin, Yellowbelly and Cod. Jackal T/N 60’s and bobbing Shrimp around the Willow Trees at Kirwans Bridge working really well for good numbers of Yellowbelly. Below the wall at the moment is a little hard work with the current water level being high and the flow rate, bait fishing is possible and most Cod have been small.

Waranga Basin is still fishing well, huge numbers of small Redfin, with the occasional decent sized fish amongst them, Shrimp by far the best bait, and trolling small deep hardbodies like RMG Poltergiest, 55mm Codgers, 65mm Balsita Smaokes and Stumpjumpers working really well for big numbers. The Outlet Channel along the Tatura/Rushworth Road holding huge numbers of small Redfin, Worms and small Yabbies working well, Pro Staffer Shane took his 4yo Daughter Payton catching as many Redfin as you wanted, most fish small and Worms where the standout bait, but a few eating sized fish in the mix, a great way to occupy the Kids over the weekend. 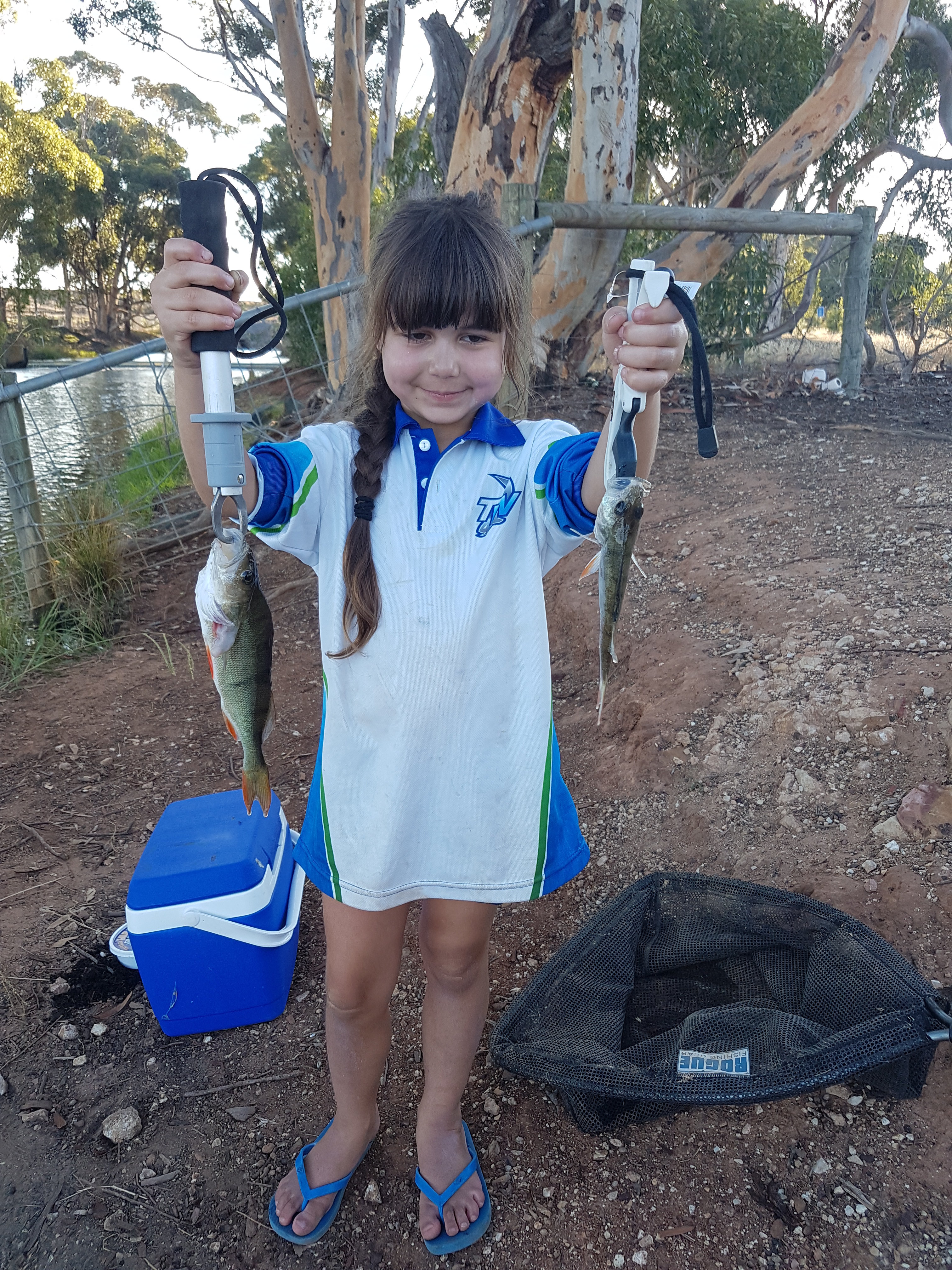 Plenty of good sized Cod being caught, pretty much from Yarrawonga to Echuca, on all techniques, Surface fishing, Swimbaits, Trolling Big Hardbodies, Casting Spinnerbaits and bait fishing all working really well, lots of smaller Cod, but you are a really good chance of catching a metre Cod at the moment. The Bergamin boys having another cracker session trolling the New Extra Large Old Mate below Yarrawonga, catching a missing a good number of Cod. Still plenty of Yellowbelly in the same region as by catch on 85mm Divers such as Old Mates and Codgers. Fisho’s catching Cod around Cobram on Dims Sims, yes Dim Sims!, the fish wouldn’t take anything else! 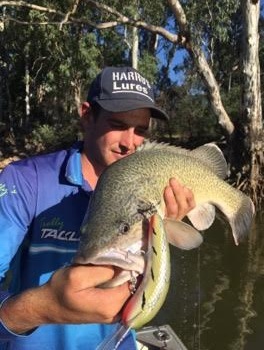 Next week any looking for a Kingfish fix head offshore to the back on Point Lonsdale and look for birds working and trolling ocky skirts with squid strips in the hope of a kingfish or two. Plenty of whiting on offer with St Leonard’s a reliable location.