It’s been made pretty obvious what’s been on a lot of fisherman’s minds over the last week and that is garfish and there is plenty out there both fishing from a boat or land based. St Helens rocks, Lineburners boat ramp, Grammer school lagoon and the Geelong Waterfront have all been fantastic locations to go out and target some of these tasty fish. Just a simple pencil float rig, a tiny piece of bait and a burley trail is all you require to get into the action which makes life easy especially when taking the kids. Still plenty of pinkie snapper and snotty trevalla on the go around the Geelong yacht club, once again soft plastics have remained a great way to target them.

The outer harbour has been a very productive option over the past week especially if you’re after a tasty feed! King George whiting have been chewing well out the front of Leopold with some fantastic reports rolling in with fish to 38cm, it has been a struggle to get your bag but with some patience it could come. 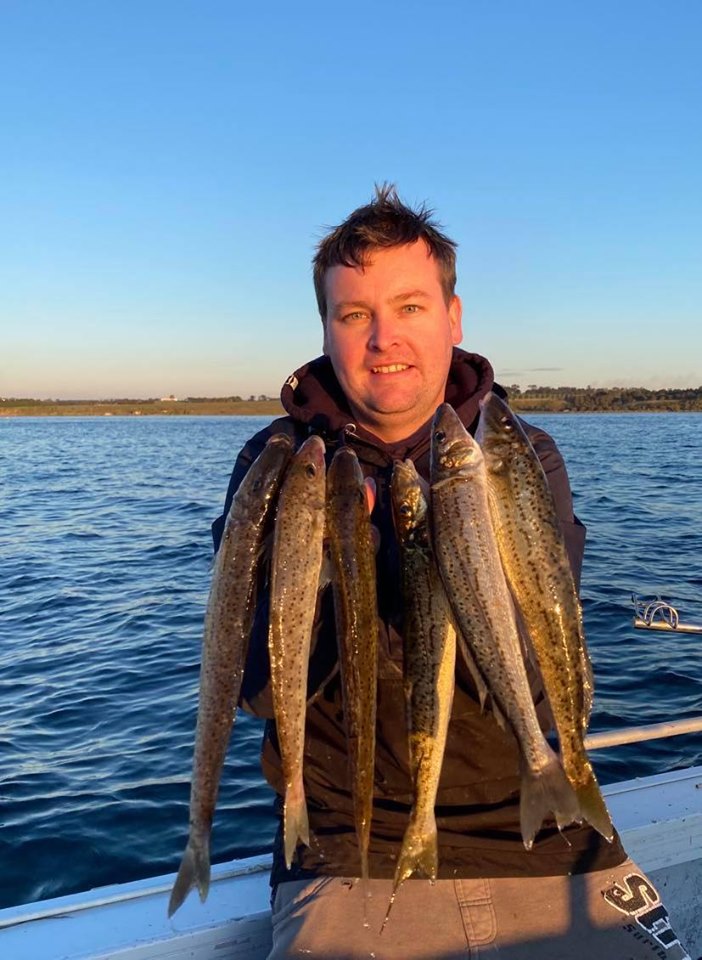 The Shark fishing off Barwon heads is on fire at the moment with plenty of other reef species on the chew too. The highlight this week would definitely be Daniel Maddalena and his 2 boys with their Thresher Shark. Fishing in 50 metres of water off Barwon heads Daniel had the fight off his fishing life when the Thresher decided to jump onto his line and after 1 hour on the rod it was on the deck. Bryce Nurnaitis also got into the local shark fishing landing a cracking Gummy weighing in at 14kg. 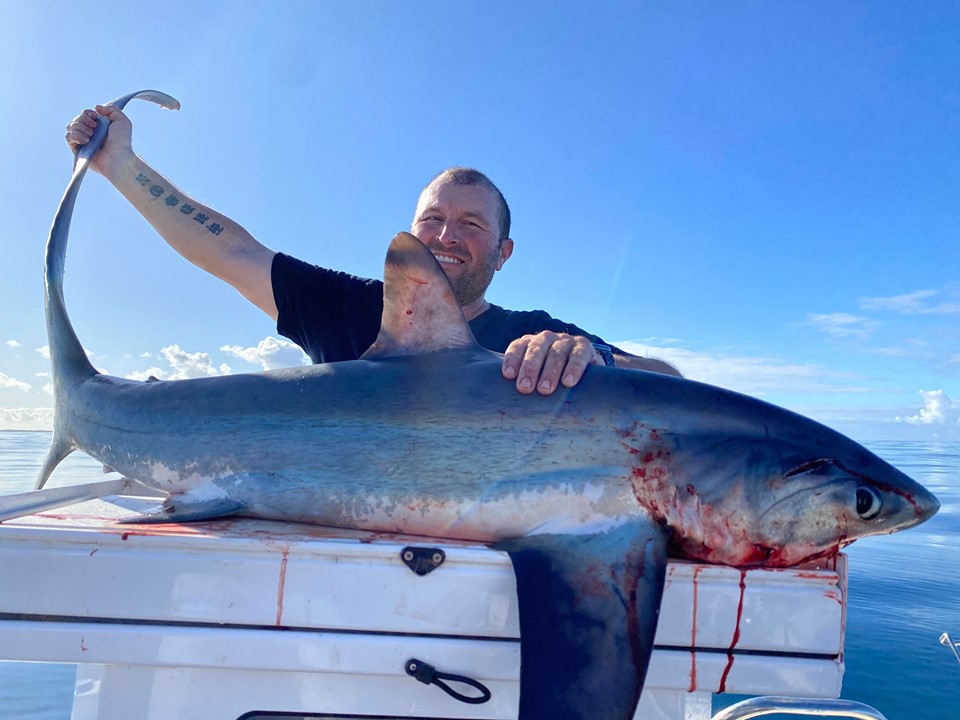 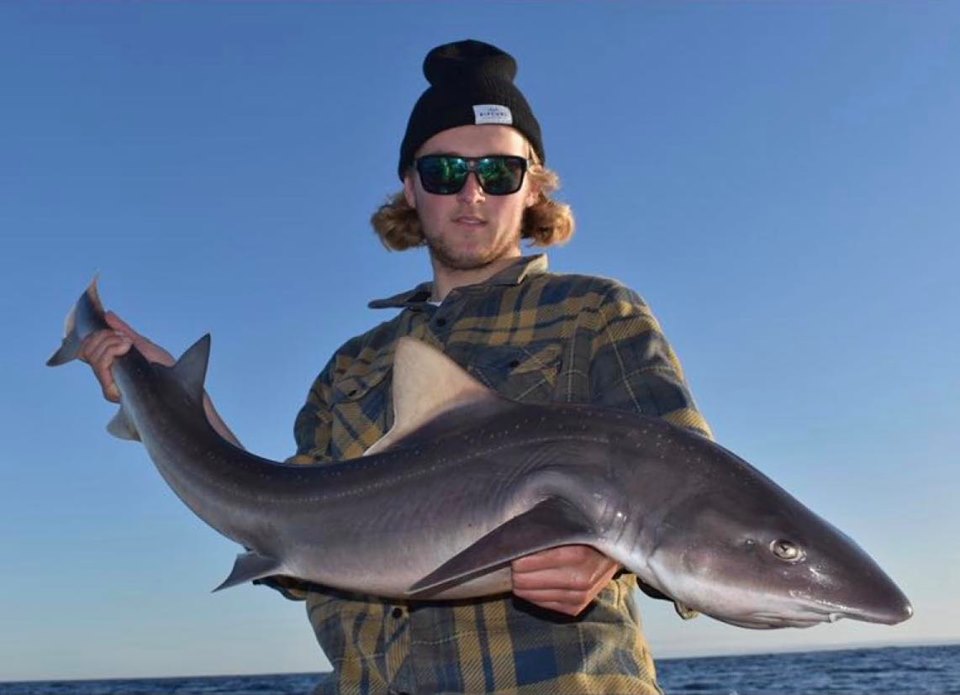 Port Fairy has got quite a hot Tuna bite on at the moment with heaps of fish on the chew and more than willing to eat a variety of lures. The fish seem to be holding best between 40 – 60 metres of water and averaging between 5 – 10 kg in weight. Andy, Zac and Josh Whitford made the drive down on the weekend and the boys had some great success in 50 metres with fish on both the troll and the cast. 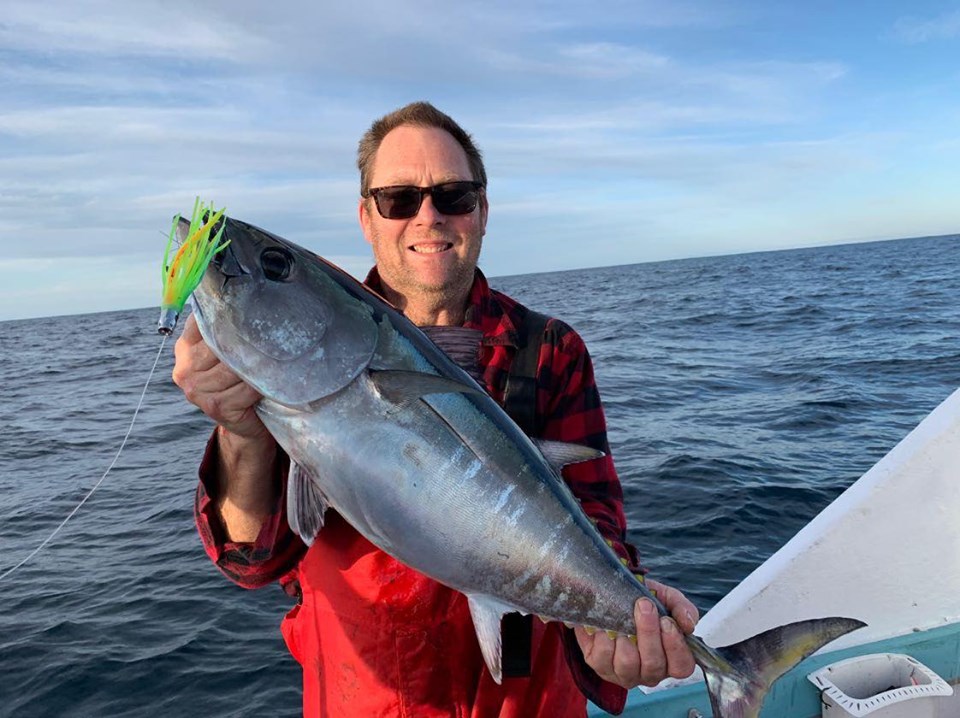 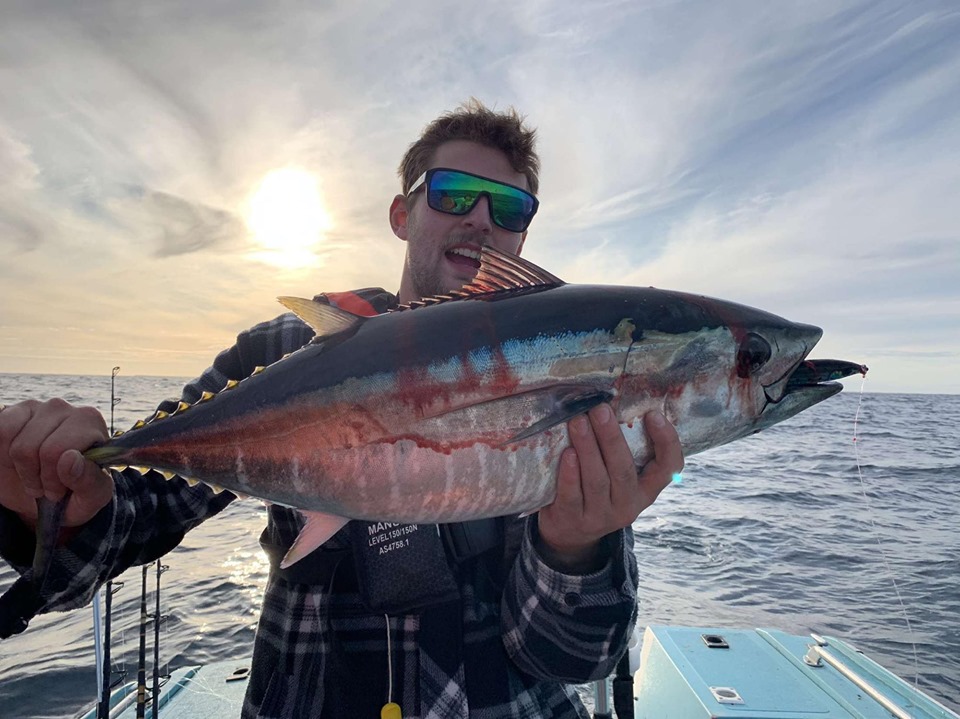 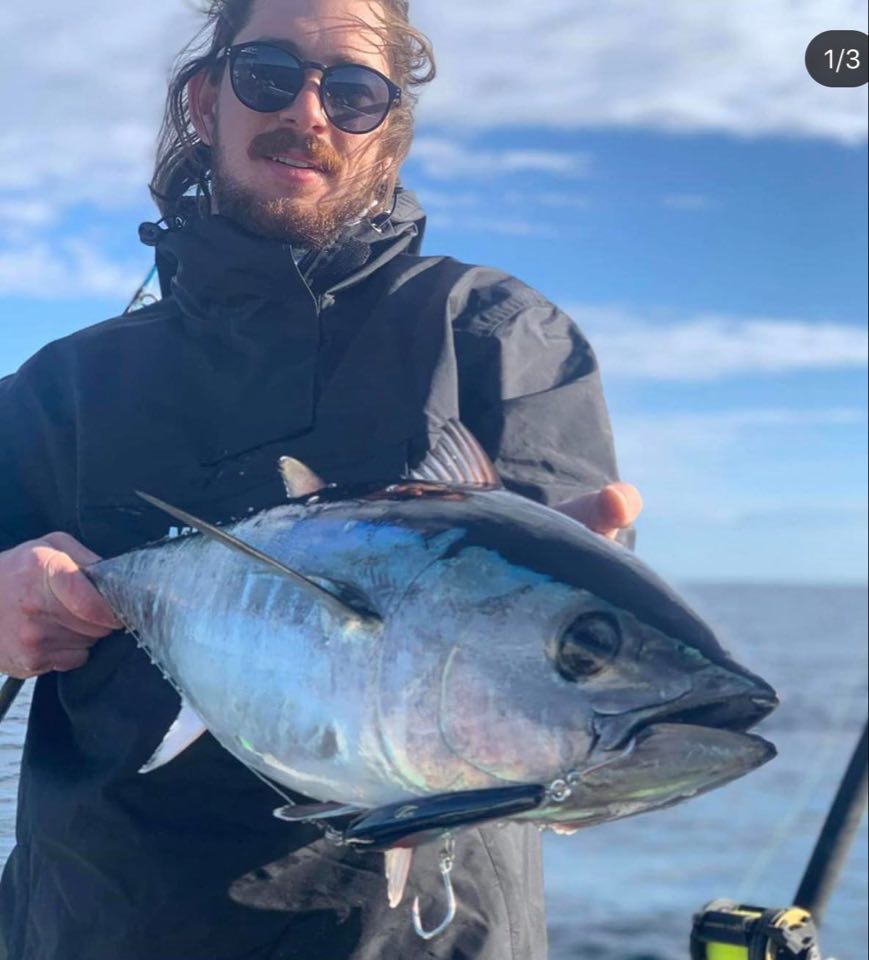 The western trout fishing is still producing some nice trout to the keen angler sticking it out in the average cold mornings, Beau Allen made the drive down to the Hopkins River and managed to snag himself a cracking brown trout whilst casting hardbody. 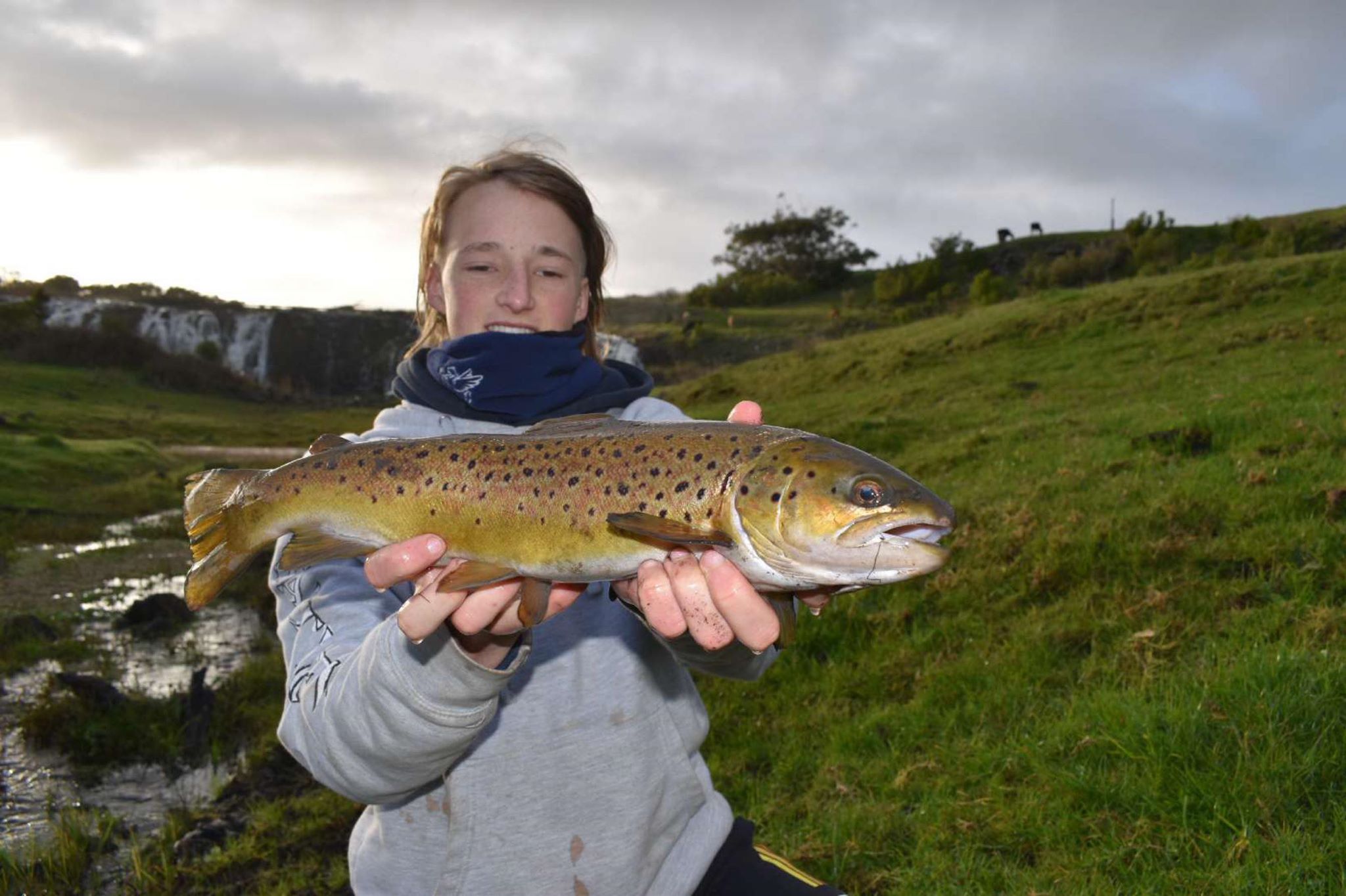 The Goulburn is still running high around Shepparton but we have heard a handful of reports that a few mid sized fish are getting caught in some of the slower water while dropping baits down such as Scrubbies and Chicken bites.
There hasn’t been heaps of talk from Nagambie but we’re still hearing some reports of nice Crays getting pulled out from the deep water near the wineries.

Waranga Is up at 85% at the moment meaning that there’s heaps more great areas to be fished. The flooded grass banks will provide heaps of food in the form of bugs and other insects that are getting washed into the water.
Trolling shallow divers around the edges has proved a good choice as well as working soft plastics like the 3” Keitech Easy shiners.
There are still some good Yellowbelly getting around in the lake like this fat 50cm Fish that Elaina caught while trolling near the boat club over the weekend. 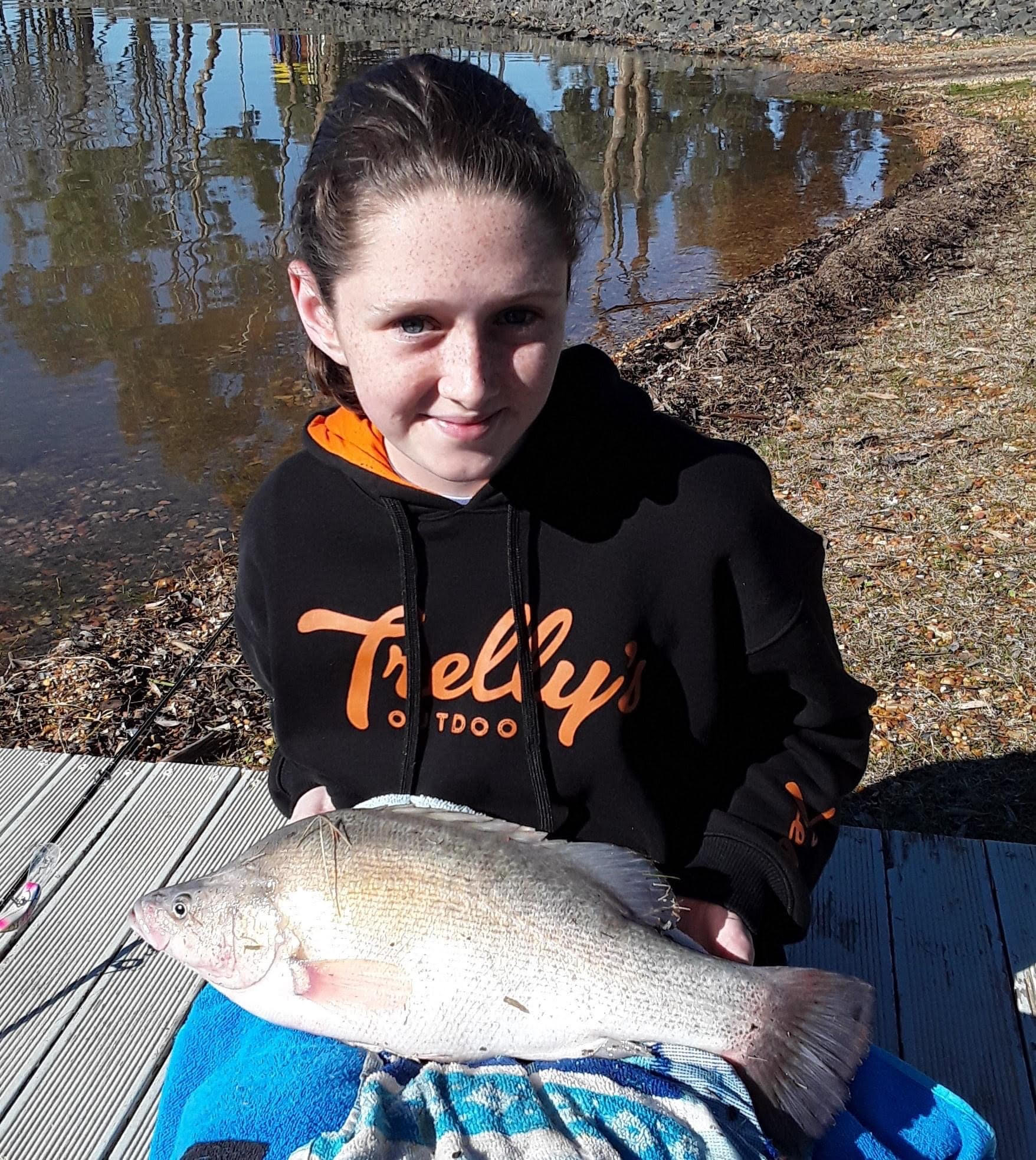 The Crays have been going well around Yarrawonga with a heap of people getting onto a nice bag while camping and making the most of the school holidays. Jayden and the family had a great session, landing heaps of legal crays for a good family feed over the last couple days. The one below was returned as it was oversize but they kept a nice feed that went down well with some hot chips. 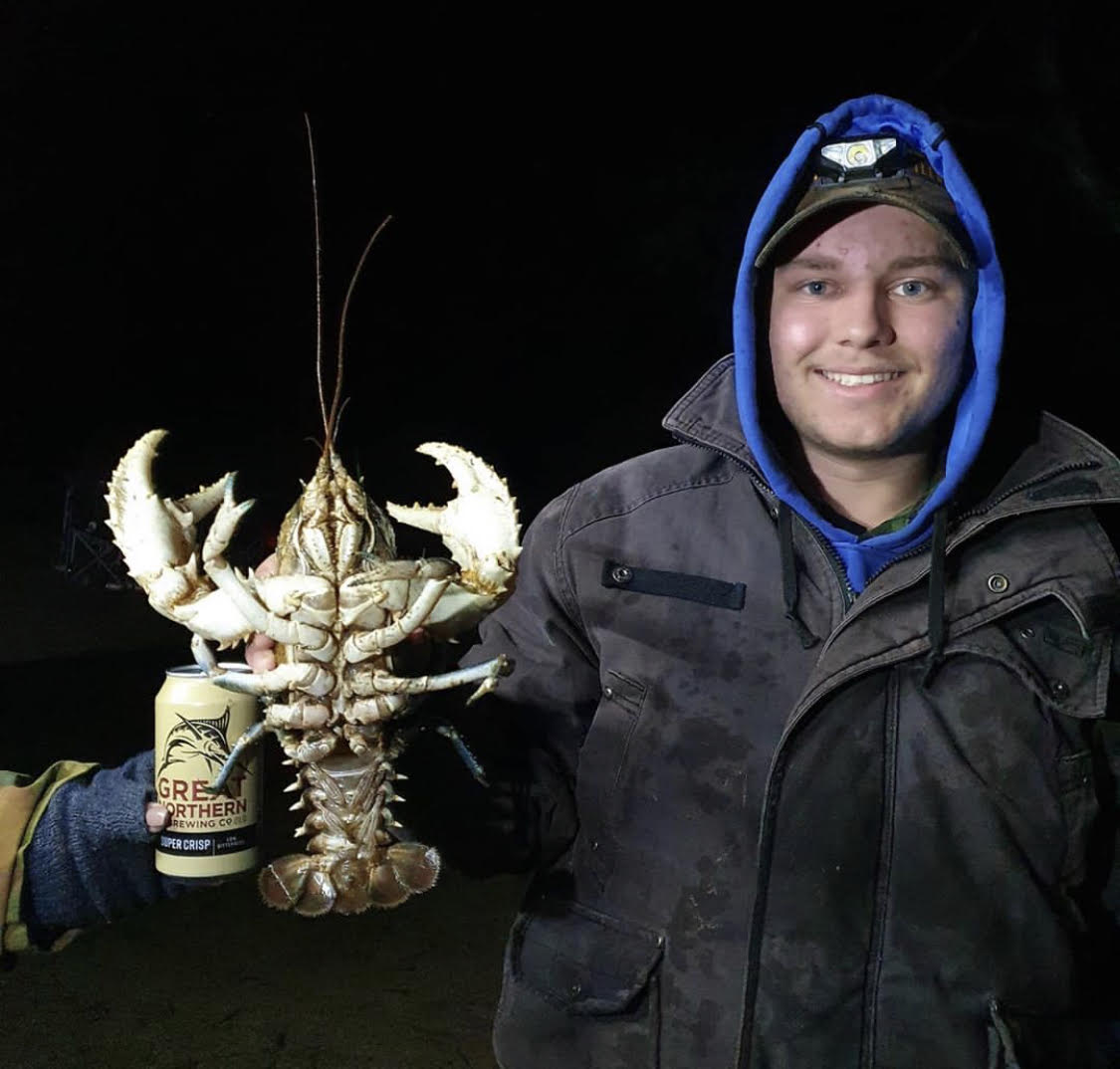 Near Bundalong we’ve been hearing more great reports of Crayfish with one of our regulars getting his bag in the first net over the weekend. The old river bed near Majors creek ramp has proved successful for most people giving it a go. We’ve heard a number of reports that people have been easily getting 20 keepers in a session. Sticking to regulations this has meant there’s a heap going back for the next angler to get stuck into.

Eildon turned it on over the weekend with a lot of people landing some great fish and getting a handful of nice ones per session. There were some great reports of people getting two or more Cod in the high 80’s and 90’s within minutes of each other. Casting towards rocky banks and finding bait in the small bays has worked well and then working big soft plastics around the baitfish has been the undoing of these big fish.
Trout have been hard to find in the lake but there were some beauties caught in the pondage over the last week. Some big Browns to 68cm were caught on bait. Scrubbies and powerbait are your best bet while using a running sinker rig.

Cairn Curran is still producing the odd yellow belly. Bait still seems to be the most effective way to get these fish to bite, running sinker rig with a scrub worm or small yabbie seems to be the go to. The hook of choice would have to be the mustard wide gap or gamakatsu  shiner hooks as they have found these hooks to be the most effective with the hook up rate usually perfectly in the side of the mouth. If you wish to target the yellow belly on lures, the ZX40 or profishent vibes in the darker colours all work well.

Visibility in the Loddon currently is very good however water levels are low. Spinnerbaits and Jackall Doozers have proved most productive this week. With some anglers reporting good catches up to 90cm. Early mornings or late afternoons still seem to be the most productive with larger lures such as the Mega Pompadour or Taylor Made Walks On Water a good way to entice the big ones to come out.

Eppalock has produced some better sized redfin over the last week. Jigging lures such as Gillies Bobbin in the 20gram or the Storm Koika Jig in green colour has been the best way to get the fish to bite. Throwing plastics once the schools are located is also an effective way to get good numbers. Curl tail grubs in white have also been the stand out.
Casting lures such as the Jackall Mask Vibe around the rocky points has also seen the odd yellow belly being caught with the colour Bluegill being the standout. These fish seem to be more active early mornings or late afternoons.

Clarity in the Campaspe is slowly on the improve! Anglers who start to put in the hard work might start to get rewarded soon. Just remember to use something such as a mumbler or a big surface lure to try and entice the bigger cod to hopefully come out. These lures help create a lot of vibration and water displacement to help entice the cod to chew. Still some reports coming out of Elmore with some Cod being caught on Trellys scented chicken.

It is a great time to head out to your local reservoir to try and catch some of the stocked Rainbow trout that have been released into these waterways recently. Best method is to use a small sinker and hook with powerbait or worms. Small spinners such as your tassie devil or minnow style lures such as the Rapala X-rap are also effective here and will increase your chances of catching a trout or redfin.  Local Bendigo angler Kade Blow was lucky enough to head out using the Trellys Black Mamba Gantarel and managed to get a nice cod. This lure is becoming very popular and is a great option in dirty or clean water. 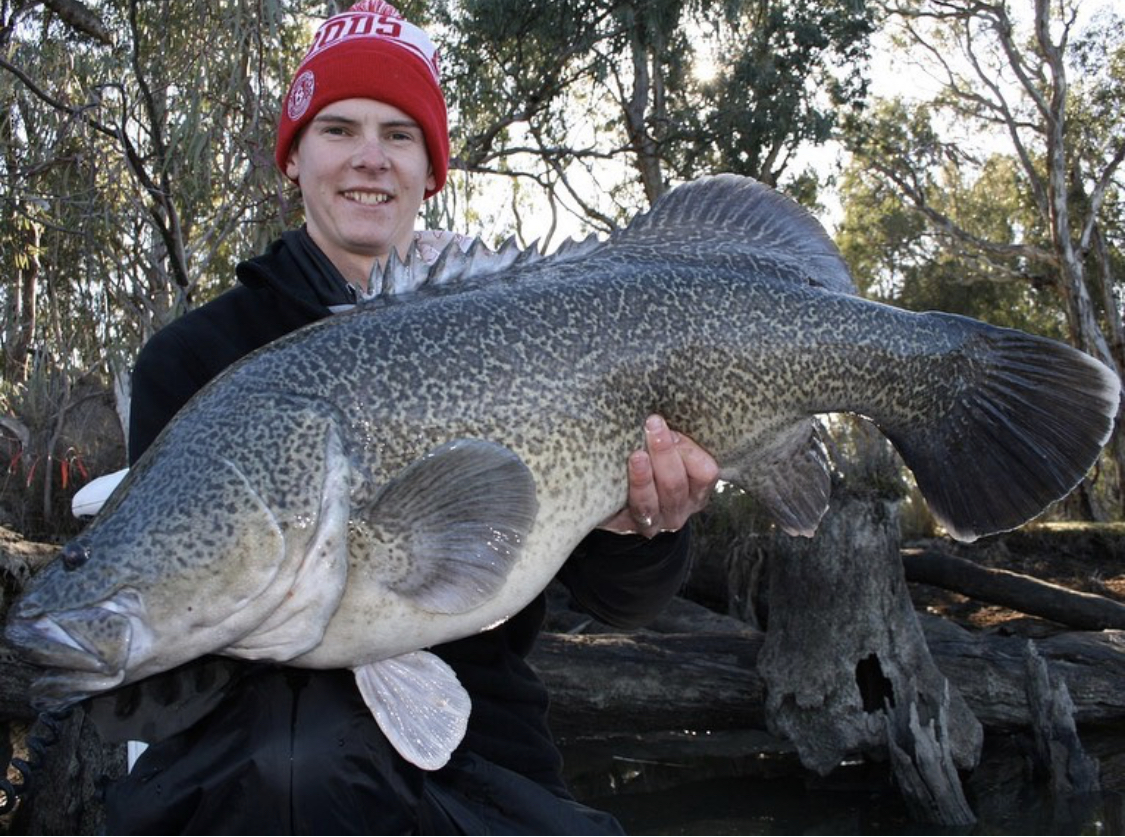 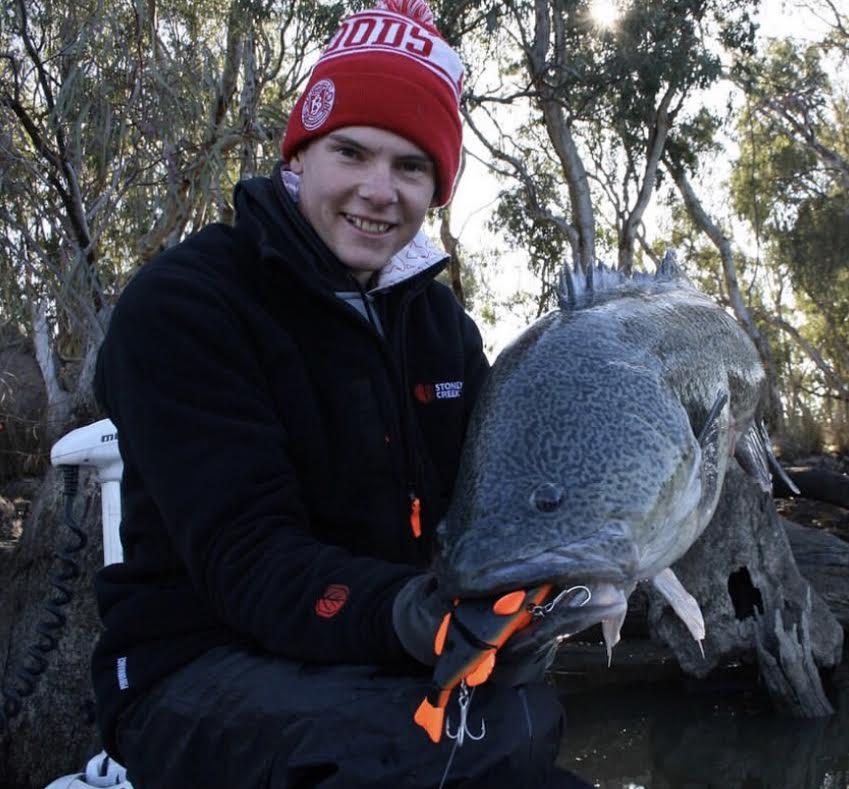 5 Tips: How to teach your kids to fish